LINCOLN — Plans for a new wind farm are set to proceed in Logan County, despite opposition from some of its future neighbors and concern about its potential effect on weather radar.

The Logan County Board voted 5-4 on Wednesday in favor of the Top Hat Wind Farm project, with several members citing the need for the revenue it is expected to generate. An estimated $500,000 is expected to come to the county from permit fees, and school districts stand to gain millions of dollars in tax revenue, officials said.

The vote came after hours of public comments, many of which came from residents opposed to the project.

On Thursday, board chair Emily Davenport said the project is expected to generate a total of $50 million in property taxes over the life of the project. A draft of the agreement indicates it is also expected to create hundreds of construction jobs while it is being built, and more than 10 permanent jobs once the farm is in operation.

“The county (board) has a responsibility ... to try and find the resources so that a host of public services can be provided at a standard that people deserve and expect,” board member David Helper said during the meeting. “Whether we like to talk about it or not, that costs money.”

Board member Dale Nelson, who opposed the project, acknowledged that the county could use the revenue but said officials should reevaluate their spending priorities instead. “I think we’re just going to have to make some hard decisions,” he said.

Helper was joined by Davenport and board members Annette Welch, Robert D. Farmer and Bob Sanders in voting for the project. Nelson, vice chair Scott Schaffenacker and board members Jim Wessbecher and Keenan Lessman voted no. 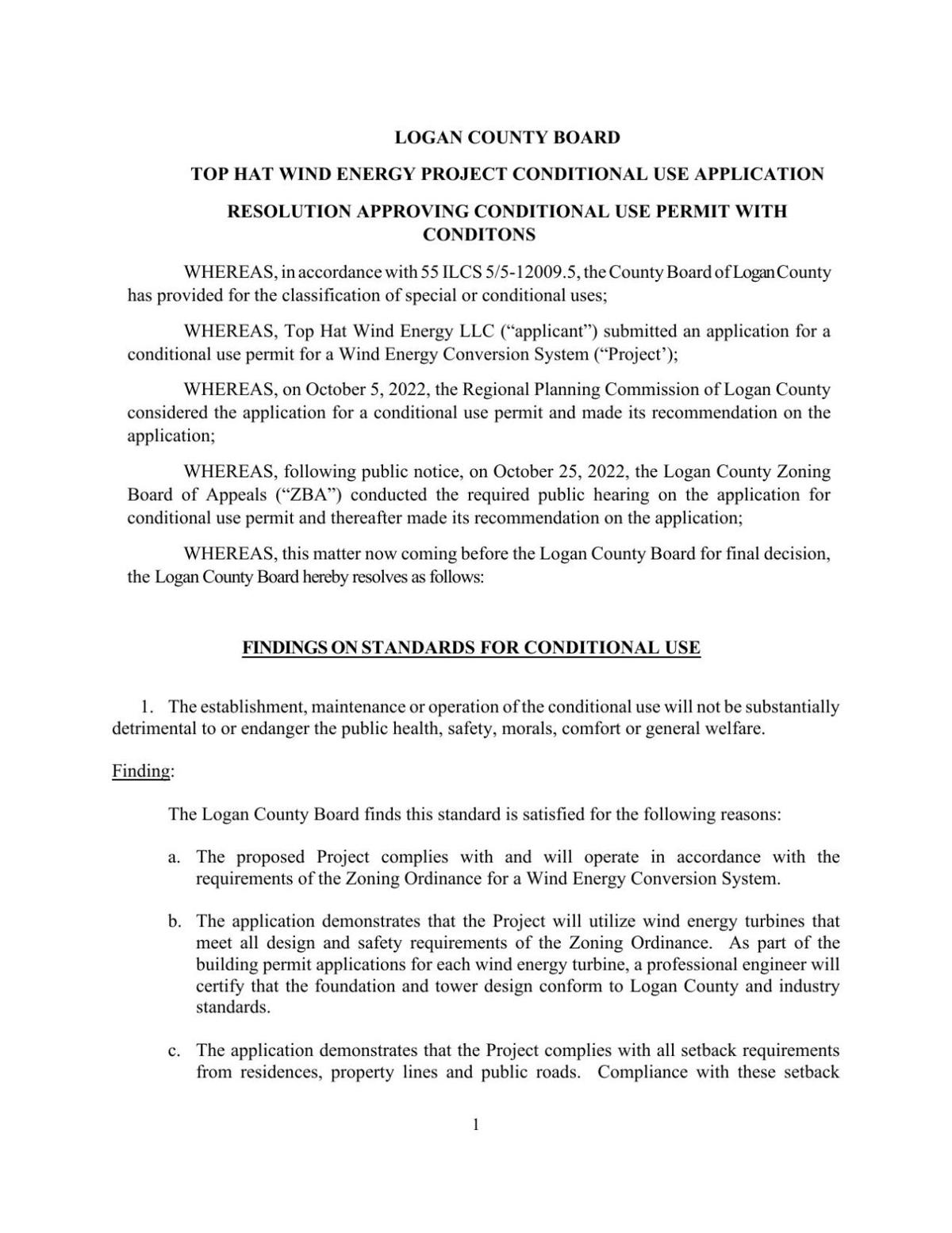 The project is planned for the southeast area of the county near Mount Pulaski and Latham, near where Logan, DeWitt and Macon counties meet. It was slated to include 60 turbines, each with 384-foot towers for a total height of about 615 feet with the blades, but several amendments to the plan were passed by board members before the vote.

One of those amendments took off three of the turbines — marked 21, 22 and 23 on the map — out of the original 63, Logan County Economic Development Officer Elizabeth Davis-Kavelman said on Thursday. Her office will also have to approve individual building permits for the turbines, so final locations may change.

There are around 50 total conditions set by the county for the wind farm, Davenport said Thursday.

In a statement on Thursday, Top Hat celebrated the step forward.

Many residents who spoke during the meeting expressed concerns about the potential effect of the wind farm on doppler radar data. The National Weather Service has a station in Lincoln, less than seven miles from the site.

High-powered wind turbines can disrupt radar readings. Some meteorologists describe the effect as appearing like it’s always raining or storming around wind farms.

“Would you be able to live with yourself knowing that you could have prevented the death of an innocent child?” said Kristen Petersen, among the residents who spoke against the project.

Davenport previously said the company had worked with the NWS and its parent agency the National Oceanic and Atmospheric Administration to ensure all parties were in agreement.

According to the weather service, the forecast office in Lincoln signed an agreement with Top Hat in June to mitigate the wind turbines’ effect on data collected during severe weather, such as tornadoes, thunderstorms and flash floods. Under the terms, the wind farm would reduce wind turbines to one revolution per minute or less within 15 minutes of notification of severe weather by the NWS office.

The states that produce the most renewable energy

States That Produce the Most Renewable Energy

WHAT: Logan County Board meeting

The proposed map of the Top Hat Wind Farm in Logan County. Turbines 21, 22 and 23 were taken off and building permits will determine the actua…

A wind farm is in the works in Logan County, but with a national weather station less than seven miles away, county board members will have to weigh the turbines' effects on doppler radar data.

The McLean County Chamber of Commerce presented six honors during its Agriculture Awards Dinner Thursday night at the DoubleTree by Hilton in Bloomington.

The items are being collected for Retrofit Culture's Giving Fence, which is stocked with free coats and more for anyone who needs them.

The Downs Fire Protection District has been awarded a $5,000 grant from the energy company planning a wind farm in McLean County.

Clinton student sells sweet treats with a side of nostalgia

Those hungry for Bit-O-Honey, Charleston Chews or candy buttons can visit Jake's Candy Spot to stock up, while supporting a 14-year-old entrepreneur.