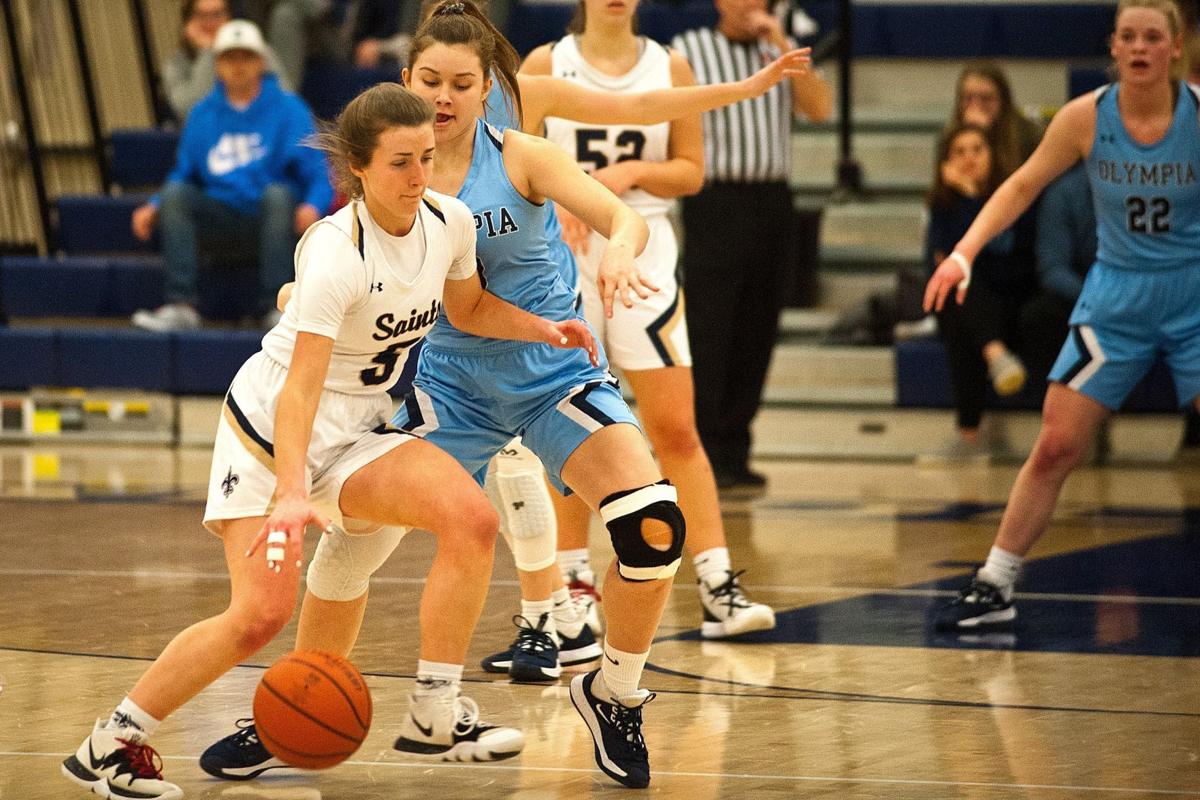 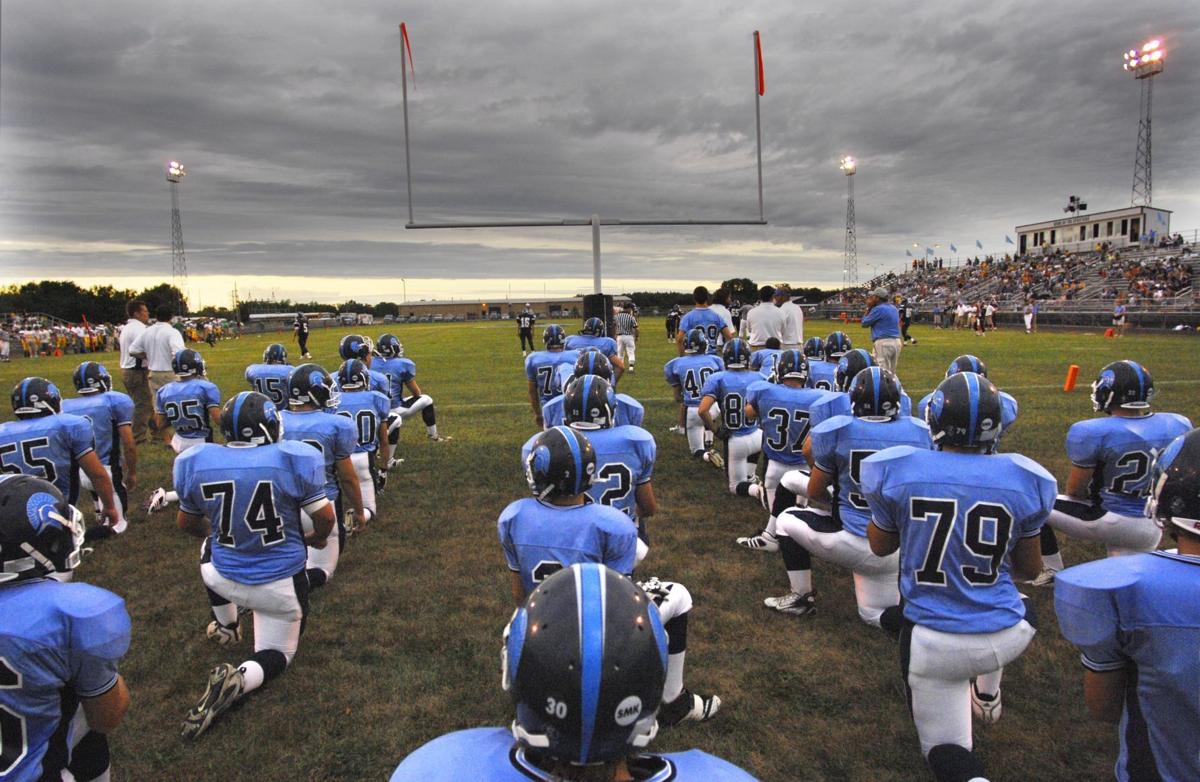 Olympia High School's varsity football team waits for the JV team to finish its game during opening night against University High on August 24, 2007, in Stanford.

In hallways and locker rooms and on buses and bleachers, we were referred to as “farmers” and “hicks.” They were meant as derogatory terms by players and fans from Central Catholic and University High.

Rivals in every other way, the two Intercity schools agreed on this: those of us in Olympia blue and white were backwoods types newly introduced to indoor plumbing. Some in their student sections wore bib overalls and straw hats, a sartorial shot at our rural roots.

What they didn’t know was we loved it. We took pride in the rips in our jeans — before that was fashionable — and dirt under our nails. We wore “farmers” and “hicks” with honor, relishing the opportunity to square off against the “city folk.”

We had gone through grade schools in our own small burbs: Atlanta, McLean, Waynesville, Armington, Stanford, Minier, Hopedale and Danvers. Now we were one — Olympia — on the same stage, and in the same conference, with the likes of Central and U High.

We read about them all the time in The Pantagraph (yes, we could read). We heard broadcasts of their games (yes, we had radios). To play them was a big deal, right from the start.

Granted, the “start” was a long time ago. Allow me to lend historical perspective.

Olympia announced this week it will be joining the Sangamo Conference in 2022. That means for the first time since Olympia opened its doors in 1972, it will be in a conference that includes neither Central nor U High.

The split from U High came in 2017 when the Pioneers left the Corn Belt to join the Central State Eight. The Spartans remained a conference rival with Central in the Illini Prairie Conference, a 2017 merger of schools from the Corn Belt and Okaw Valley. Come 2022, the link to Central will end.

There is sadness in that for many of us with Olympia diplomas, especially those there from the opening bell. Yours truly was a trembling freshman on Olympia’s first day in 1972, wary of what this consolidation of eight towns would be like.

It proved to be wonderful, and part of the new adventure was earning our stripes in burgeoning rivalries with U High and Central.

In spring 1973, the trembling freshman took the mound at U High’s baseball field … now the site of Illinois State’s Duffy Bass Field. He wore a baggy uniform, white spikes (remember those?) and had one pitch.

A fastball in name only, it was enough to record a no-hitter against the U High freshmen. Final score? Olympia 5, U High 3. There were some walks. The defense sprung a few leaks. Maybe a wild pitch or two. Perhaps a generous “official” scorer.

Still, it came across the morning announcements the next day at school as a no-hitter. Ugly as it was, it meant more because it was against U High.

That’s how it would be moving forward. Any victory over Central or U High, on a track, diamond, court or mat, carried extra weight for the farmers, hicks and the farmers and hicks to come after them.

Those meetings certainly meant more to us than them. Why wouldn’t they? We were the bottom feeders, the outcasts who in our off time pulled weeds from bean fields and chased rats out of corn cribs. Beating U High or Central meant that for one day, we were better than the guys with street addresses and paved driveways.

The disparity is not as pronounced these days. The lines have blurred a bit. The emergence of summer and AAU travel teams has led to athletes from Central, U High, Olympia and elsewhere knowing one another long before they “square off” in high school. There is more respect and acceptance on both sides.

Still, there is a sense something meaningful will be lost by not playing each other regularly and as conference rivals.

Olympia is joining a league made up of schools similar to its size. Travel will be comparable to the current Illini Prairie alignment. It could well be a good move for the Spartans, whose Sangamo brethren will include Athens, Auburn, Maroa-Forsyth, Illini Central, Petersburg PORTA, Pleasant Plains, Pittsfield, New Berlin, Riverton and Williamsville.

Likely, Olympia will have various nonconference matchups with Central and/or U High. They will count toward season records. The outcomes will matter.

They just won’t matter as much.

Especially to the farmers and hicks.

My town: Buzzer-beaters, better eating and bargains for Randy Kindred

Kindred: Will The Meeting, Part 2, to re-open high school sports in Illinois happen? Don't bet on it

Welcome to The Meeting, Part 2. It is Part 2 in name only because, as you recall, Part 1 never happened.

Rodney Kellar wouldn’t divulge the veteran basketball coach who took a shot at his school, and at him, during a conversation in the mid-1990s.…

Kindred: Can we get to ‘merry’ in a COVID Christmas? We have to try

It rolls off the tongue as December churns toward January. We say it to friends and extended family on the phone or on Zoom or from behind a m…

Kindred: Dan Highland’s run as State Farm Holiday Classic president proud and productive, even as it ends in a pandemic

Dan Highland envisioned his final year in charge of the State Farm Holiday Classic being like the others: screaming crowds, shrill whistles, f…

Kindred: Please 2021, bring back sports as we knew them, warts and all

We need sports to come back, warts and all, and make us whole. While it won’t happen overnight or even soon, we need it to happen.

Kindred: McLean County Tournament on hold in the present, but its rich past can help fill the void

It is January, a time for holiday-expanded waistlines, short-lived resolutions and the promise of a new year.

Olympia High School's varsity football team waits for the JV team to finish its game during opening night against University High on August 24, 2007, in Stanford.