World Series: Follow updates and scores as the Astros face the Braves

CHARLESTON — Not being in the fast heat didn't lead to great expectations for University High School's 4x100-meter relay during Friday's Class 2A Girls State Track and Field Meet at steamy O'Brien Field.

"We weren't expected to place. We wanted to get ninth (and a medal), get something to place to show for our hard work this year," said lead-off runner Jade Carthans.

How does a second-place medal sound?

U High came in seeded 10th, but blazed to a season-best 49.35 seconds and watched only Peoria Richwoods (49.25) beat their time in the final heat.

That effort helped the Pioneers secure fifth. U High, which scored in seven events, totaled 38 points. Eureka tied for 14th with 18. Chicago Latin took the title with 69 points, followed by Geneseo (60) and Chicago Rosary (46).

Carthans led off for 4x100 relay for U High, followed by Naomi Elliott, Karianna Merriweather and Reese Mitchell.

"The key was making sure to keep the lead and making sure handoffs were perfect," said Carthans. "We wanted to make sure we pushed ourselves and ran our race ... but we're surprised we finished second."

"As a sophomore coming up this year I'm pretty happy what I did today," said Barr. "I wasn't expecting any of it, I'll be honest. The hurdles really didn't go as planned, but I had a massive PR in it so I'm really proud of that.

"The 100, after that (the hurdles), was a really quick turnaround. It was a lot more than I was expecting. I'm very happy with the 200. It felt a lot better than it ever has."

Perhaps the day's biggest surprise came when some raindrops fell between the 300 hurdles and 200 even with the sun still shining.

U High also placed seventh in the 4x200 relay (1:46.14) with Carthans, Merriweather, Elliott and Jersey Jones passing the baton.

Lincoln freshman Becca Heitzig held the lead after the first lap of the 800. Latin's Marianne Mahias, who won in 2019, made her move quickly to get ahead, but Heitzig hung in to take second in 2:13.90. Mahias was clocked in 2:13.00.

"It went exactly as I thought it would," said Heitzig, who had never run against the senior Mahias. "I wanted to take it off fast and try to push everything I had in the last lap."

Eureka junior Anna Perry ran most of the 3,200 by herself after Ava Parekh of Latin and Mary Grace Hegberg of Arlington Heights Christian broke away early. Perry took third in 11:06.55, while senior Savanah Beavers of Olympia was fifth (11:14.15).

"It's really hard, but you have to put your mind to it," said Perry of having no one to keep pace with. "I've kind of had that my whole season, kind of not any competition around me. It kind of prepped me for this."

Eureka was eighth in the 4x800 relay when anchor runner Alexi Fogi got the baton. She moved up to sixth with a lap left and eventually passed two more runners to take fourth (9:50.85), holding off Morton.

"Will power, I guess," said Fogi on what spurred her with teammates Elle Knapp, Claire Albertson and Grace Wegner. "I love the ladies I run with and I wanted to do everything I can for them ... You know they (Morton) are real close to us so, of course, you want to hold off somebody whose your next-door neighbor. Every place counts so we wanted to give our best."

The Hornets finished by taking eighth in the 4x400 relay, the day's final event, with Sophie Kaufman, Laurel Munson, Knapp and Fogo (4:11.52).

The 90-plus degree temperature and sticky humidity were a big story of the day. But the competitors didn't let it deter them from their goals.

"I wasn't expecting it to be this hot, but the last 2-3 weeks we've been training outside at practice to run this time and get ourselves prepared for this heat," said Perry.

The Class 3A State Meet will be held Saturday beginning at noon. 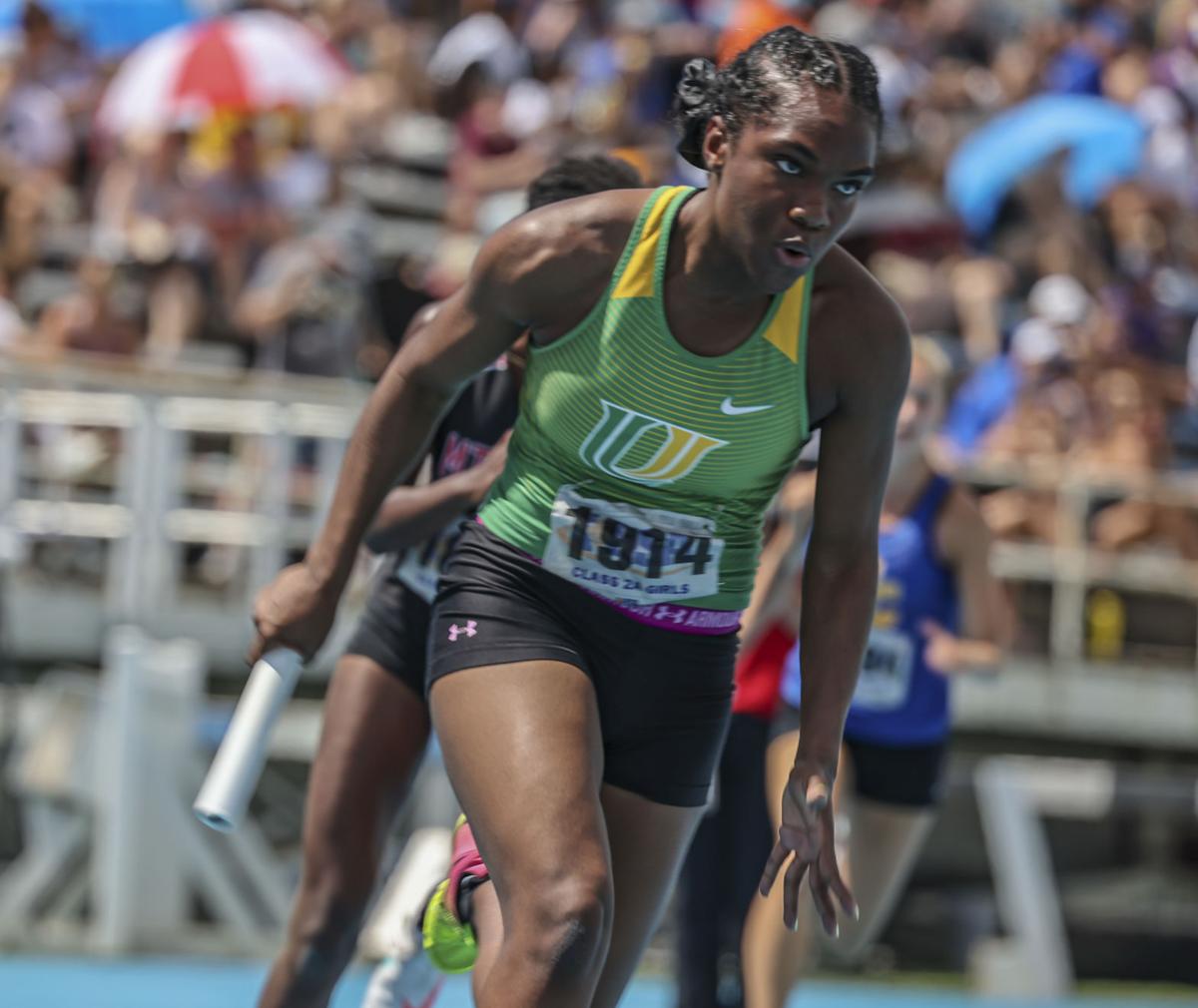 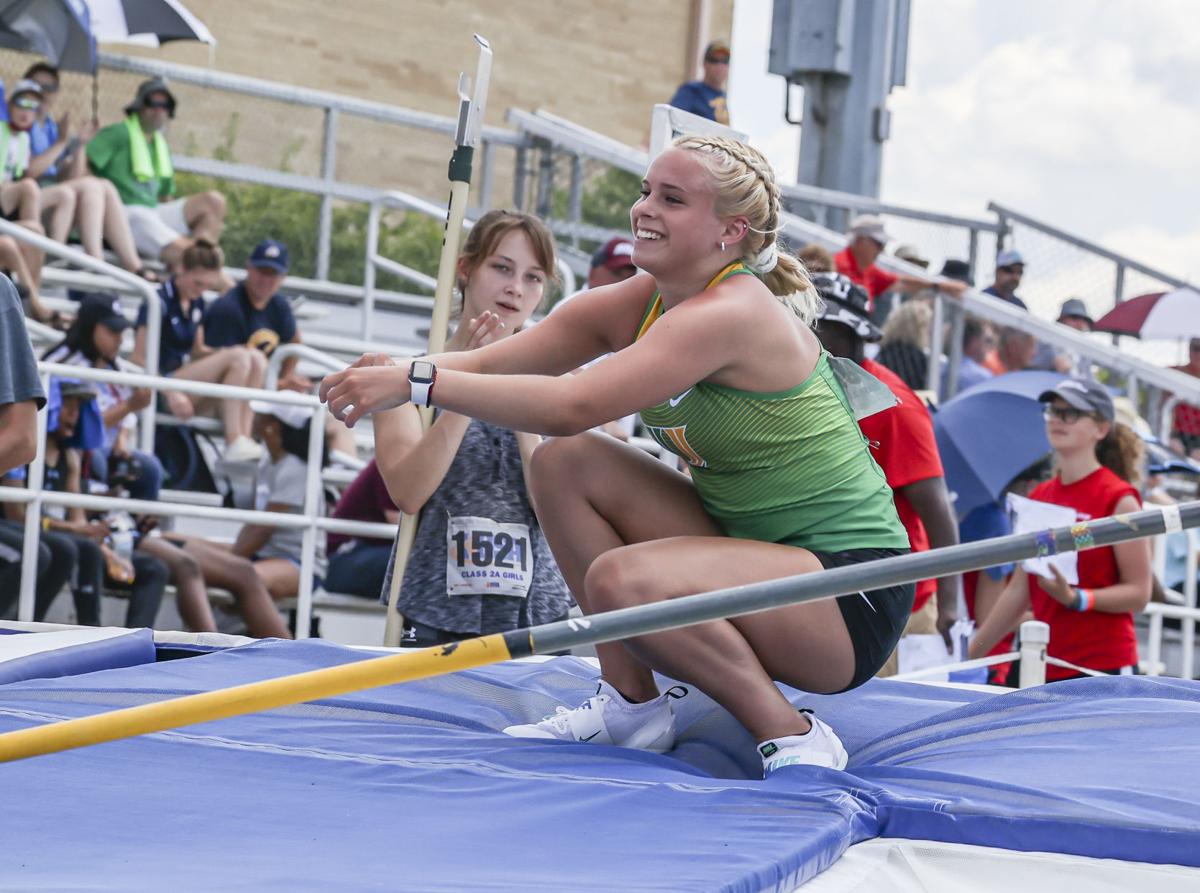 University High's Sawyer Schoon reacts after the pole vault Friday during Class 2A Finals for Girls Track and Field at O'Brien Field. Sawyer placed sixth. For more photos plus videos and full coverage of the meet, go to pantagraph.com/sports.