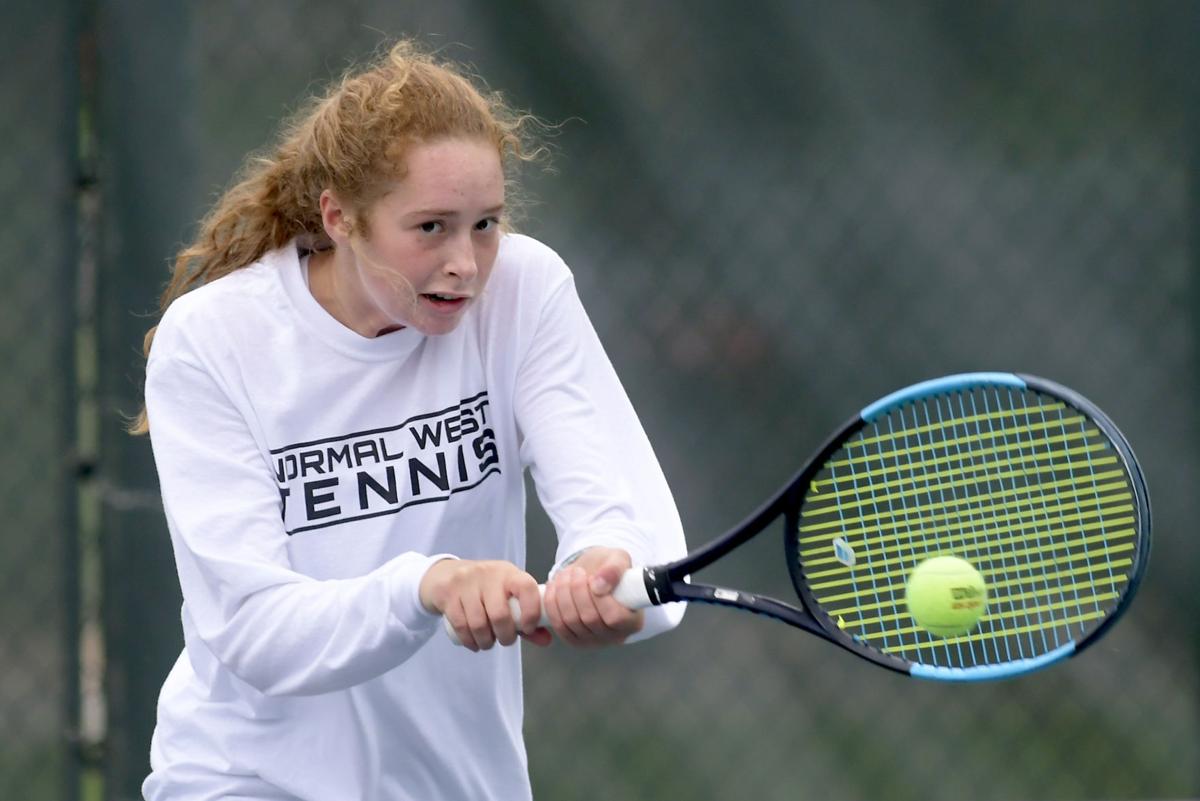 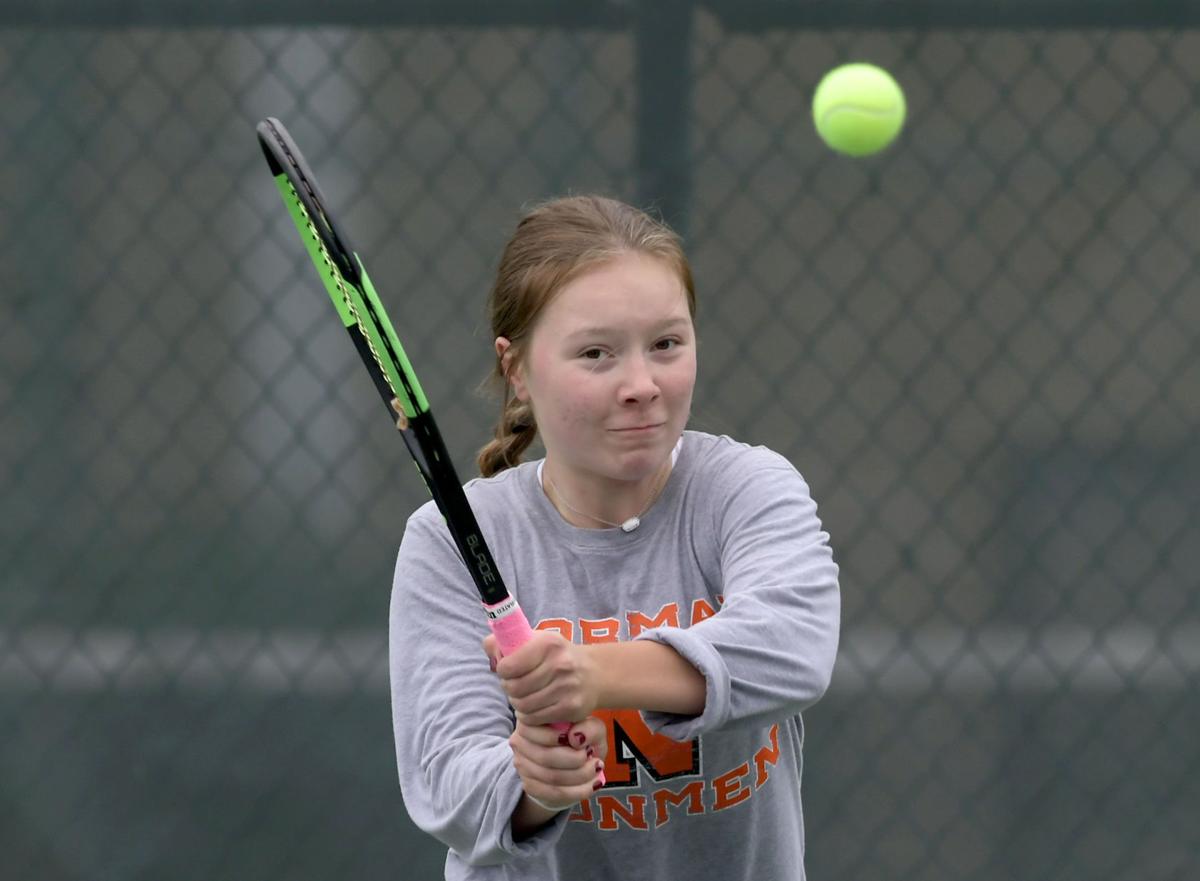 Normal Community's Anna Mayes returns a service to Monika Birski of Moline during their No. 1 singles semifinal match in the BHS Purple-Gold Invitational on Saturday at the BHS Courts. Mayes won in three sets. 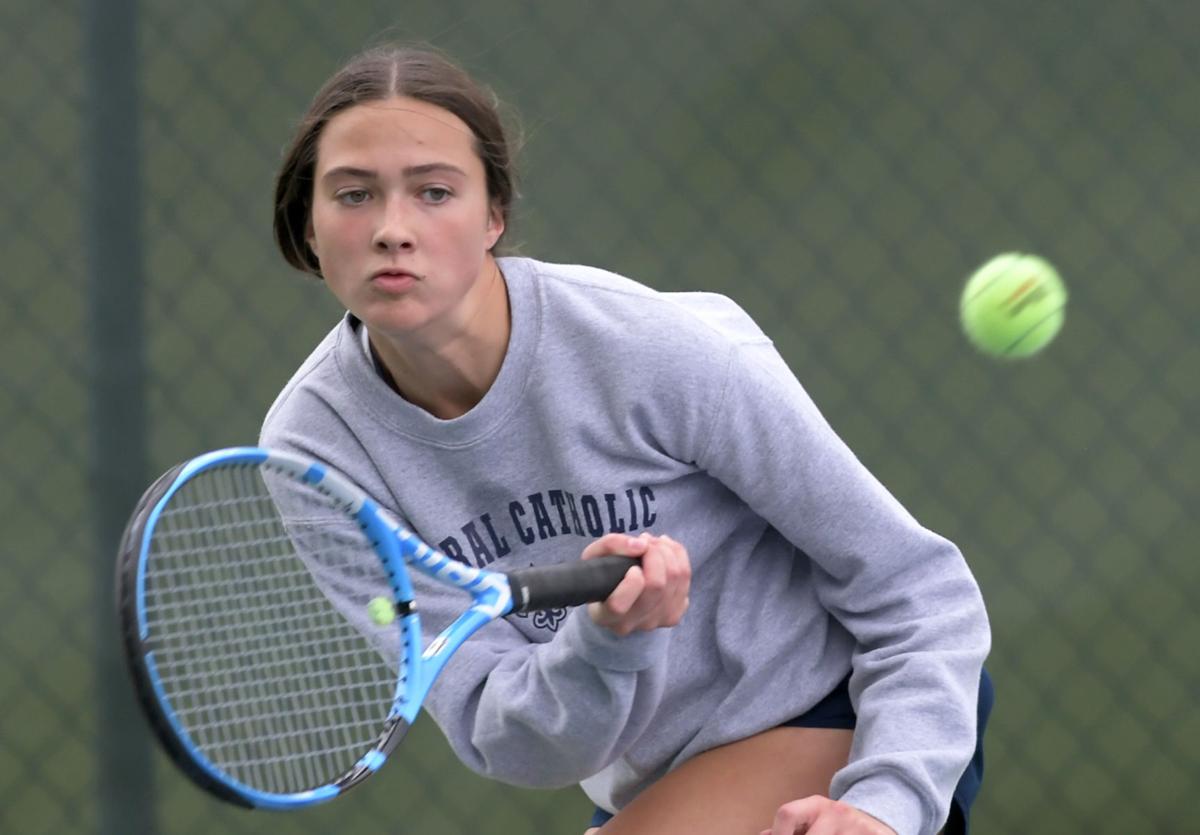 Central Catholic tennis player Maggie Ames returns a volley from Normal Community's Anna Mayes during their match in the Bloomington Purple-Gold Invitational Tournament on Saturday at the BHS Courts. 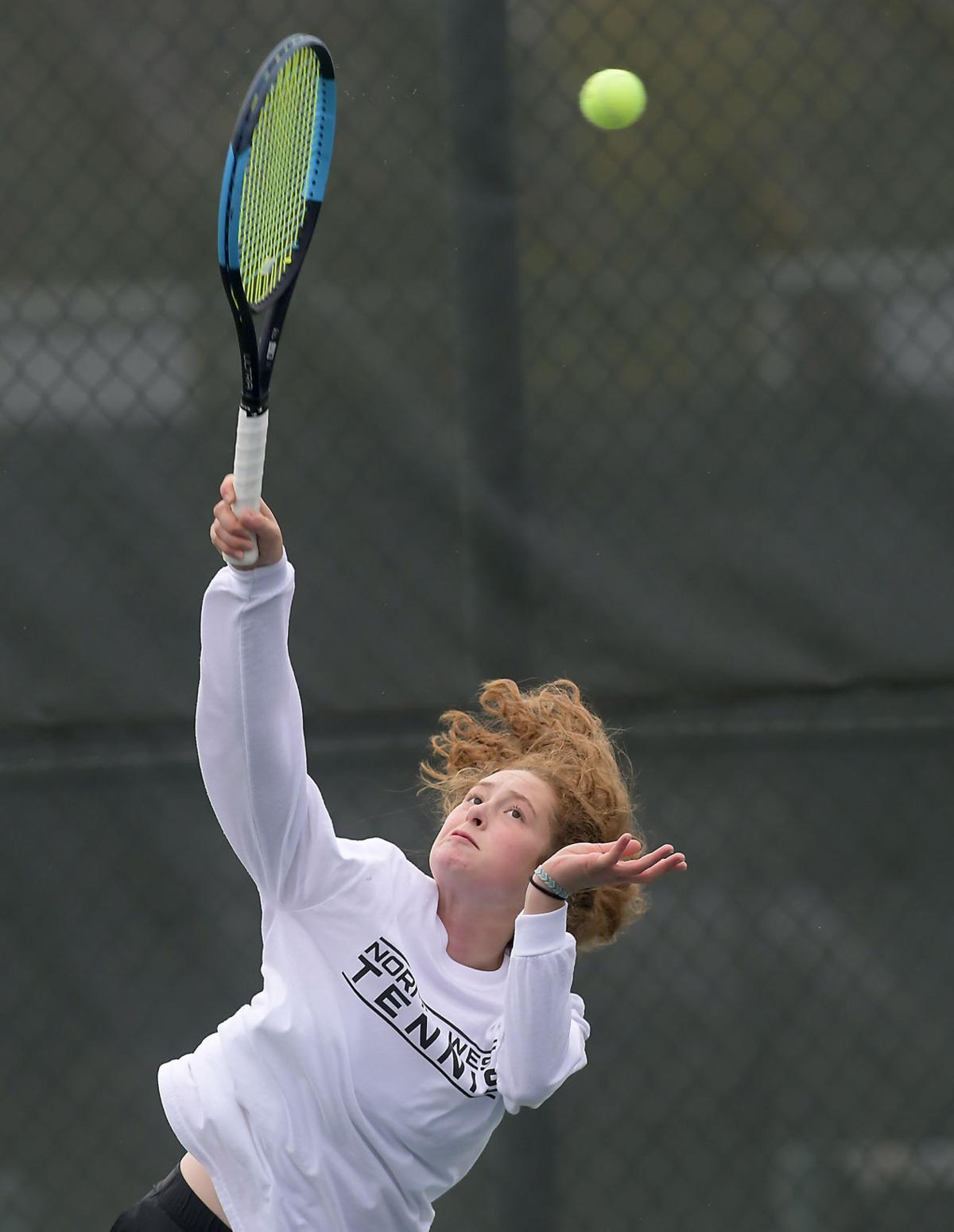 BLOOMINGTON — Normal West High School's Madeline Gentry said her victory in the No. 1 singles championship match was a lot more difficult than the score indicated Saturday.

Bloomington sisters Mariel and Gabrielle Runyan made their win to secure the No. 1 doubles title much more strenuous than they wanted.

"She's a really good young player and makes me work for everything," said Gentry, a junior, as the pair exchanged several long volleys throughout the match.

The Runyans were up a set and serving for the match against Moline's Lauren Myers and Sarah Gustafson. Suddenly, the Runyans were broken twice on their serve and dropped the second set in an 8-6 tiebreaker.

"We had to get less nervous and less tight and just loosen up," said freshman Gabrielle Runyan.

Cut back from a traditional two-day event due to COVID-19 restrictions, two singles and three doubles were played on Saturday. Because rain curtailed the back draw, team scores were not kept in the eight-team field.

The No. 2 doubles title went to BHS' Malia Moss and Olivia Bell with a 6-2, 6-1 win over University High's Maggie Feely and Einsey Socrates.

Mayes was stretched to the limit in the semifinals against Monika Birski of Moline before coming back for a 4-6, 6-2, 10-7 victory. The match started at the BHS Courts before being moved outdoors to Evergreen Racquet Club.

"I could tell she had a long match," said Gentry, who didn't drop a game in her two matches before facing Mayes. "I tried to use that to my advantage and move here around more and get her tired."

Gentry's only singles loss this season came to another NCHS freshman, Kruthi Sudhir, who played doubles with Varsha Naraharasetty on Saturday. They lost a three-setter in the semifinals to Myers and Gustafson.

"They keep me on my toes. It's really nice to have young players coming up who will push me," said Gentry. "They cause me to get better and we all cause each other to get better. It's a good environment between me, Anna and Kruthi. We're all just getting better together."

Gentry is looking forward to next weekend's Big 12 Conference Tournament at BHS and NCHS where the Wildcats are the defending champions. Doubles will be played Friday with singles next Saturday.

The Runyans played doubles together in dual matches this season, but this was their first tournament. While no decision has been made yet whether they will play doubles or go in singles for the Class 1A Central Catholic Sectional in two weeks, they liked the result Saturday.

"We do a good job listening to each other's advice and not getting mad if one of us misses or something like that," said Mariel, a sophomore. "We're sisters, but when we play doubles we don't argue. We work pretty well together."

That was put to the test after seeming to have a straight-set victory locked up before going to the third set.

"We had to be more consistent, for sure," said Mariel. "We were making a lot of unforced errors."

Sports reporter Jim Benson picks some memorable writes from this year. From covering the Illinois State basketball team to a golf professional retiring after being in the Bloomington-Normal Community for 28 seasons to a wonderful tribute to a devoted Normal West fan to Chicago Bears coach Matt Nagy supporting the local Red Cross, 2019 was full of a little bit of everything. Thanks for reading.

On the day the press box at Maxwell Park was dedicated in Charlie Crabtree's honor, the Normal West softball players could hear their favorite…

Matt Nagy teams up with Red Cross in Normal

Chicago Bears head coach Matt Nagy was in high demand after helping the Bears win the NFC North Division title. Coming to Normal for a dinner …

When Laura Provost arrived as the head professional at the Illinois State Golf Course in 1992, she thought it would only be for a couple years…

Freshmen and sophomores figure to challenge veterans for supremacy in Intercity girls tennis this fall.

BLOOMINGTON — It’s time for the jokes to stop regarding Normal West High School girls tennis. Say “so long” to the ribbing the Wildcats have e…

NORMAL — Madeline Gentry lost only one singles match this season. The Normal West High School senior won't have a chance to avenge that defeat…

Normal Community's Anna Mayes returns a service to Monika Birski of Moline during their No. 1 singles semifinal match in the BHS Purple-Gold Invitational on Saturday at the BHS Courts. Mayes won in three sets.

Central Catholic tennis player Maggie Ames returns a volley from Normal Community's Anna Mayes during their match in the Bloomington Purple-Gold Invitational Tournament on Saturday at the BHS Courts.