Become a Member
Read Today's E-edition
Share This
Kindred: Ex-U High players honor Frank Chiodo, who prepared them to win in football and in life
0 Comments
Share this

Frank Chiodo’s University High School football team had rolled over Intercity rival Normal Community, 35-0, on a glorious Friday night. On Saturday, then-Pantagraph reporter Steve Adams met with Chiodo and found the U High coach was “still high in the clouds.”

Chiodo was loving the view.

“I won’t come down for anything,” he told Adams.

That was 51 years ago. U High had just completed its first unbeaten, untied season in 20 years, finishing 8-0. The win was the Pioneers’ first over Normal Community since 1955 after going 0-13-1 in the previous 14 meetings.

It was “high in the clouds” stuff.

At some point, Chiodo returned to earth. Life insists on that. Yet, on another Saturday — this past Saturday — Chiodo was back up there.

At 92, he had the opportunity to relive that season and many more during an event held in his honor at Baxters American Grille in Bloomington. Former players from the 1970 unbeaten Pioneers and other Chiodo-coached U High teams celebrated his career.

They spoke of how Chiodo’s tough but caring approach prepared them for life, sharing stories and, in the end, putting a tear or two in their beloved coach’s eyes.

“I thank everyone for the kind words. It’s sure appreciated,” Chiodo told them as the event came to a close. “You guys really know how to make an old man feel good.”

A few other eyes got moist at that. The night was about letting Chiodo know the impact he had, showing him love and respect. That they made him “feel good” was a victory.

Chiodo was 136-95-2 as U High’s head coach from 1964-1989, earning induction into the Illinois High School Football Coaches Association Hall of Fame. That 1970 season was arguably the highlight, though Chiodo has never singled out players or teams. There is room in his heart for everyone.

“Everybody on the team was a teammate,” he said.

That included Jean Chiodo, the coach’s wife of 69 years. She was at his side Saturday night and many who spoke expressed gratitude to her as well. She routinely opened her heart and home to them. They appreciated both.

Her husband was demanding on the field, but guided the Pioneers with what former U High quarterback Jim Crews likened to “a velvet-covered brick.”

“You hit us over the head, which was OK, to get our attention, but the velvet represented how much you cared,” said Crews, a junior on the 1970 Corn Belt Conference and Intercity champions. “It always softened the blow because we knew how much you cared.

“Speeches are words, and words can’t express the feelings, the things that you taught us. Speaking for everybody here, we want to thank you not for any one thing, but for everything. We all appreciate you and we all love you.”

A former Division I college basketball coach with 431 victories, Crews credited Chiodo with preparing players for the “adversity, successes and challenges” in life, for opening their eyes to hard work, and for warming their hearts through action and words.

“We were ready to compete for you just because of who you were,” Crews said.

Before he was a coach, Chiodo was a star athlete at Joliet High School, earning a school-record 11 varsity letters, and at Illinois State, where he is in the school’s Percy Family Athletics Hall of Fame for football and basketball.

He knew what it took to succeed and instilled that in his players.

“First of all, it was just his presence,” said Rick Thompson, a tight end and receiver on the 1970 team. “When you were in the presence of Coach Chiodo, you knew that he was all about business. You knew you had something to do and you were expected to play at a very high level.”

Also a standout basketball player, Thompson received a football scholarship to Northwestern University. He went on to a career as a teacher and coach, mostly at Aurora West High School, until retiring in 2012.

He will tell you Chiodo had a hand in all of it.

“If it wasn’t for Coach Chiodo, I wouldn’t have ended up at Northwestern,” Thompson said. “He got me a scholarship and it was a full ride. Although I maybe didn’t play very much, I got a great education and my dad was able to retire early because of that. When you mention Coach Chiodo to me, he’s a very special guy.”

It was the prevailing sentiment on this night, from Crews to Thompson to 1988 grad and former quarterback Jamie Chevalier to Chiodo’s longtime assistant coach, Bob Morris.

Morris found Chiodo to be a master at dealing with players, saying he always focused on “the best interest of the kids in the big picture.”

There also was this:

“There was never a gray area with Frank,” Morris said. “When he spoke to you, whether you were a player or an assistant, it was a direct conversation. You prayed he didn’t have to repeat it, because then it wasn’t going to be any fun.”

Later, at the podium, Morris spoke from the heart to his mentor and friend.

“You were an all-time All-American, but more importantly, you were an All-American all the time,” Morris said. “And for that, I love you, Frank. There isn’t anybody sitting here who doesn’t.”

Among the many former players were Hud Venerable, Jack Eddy and Hal Chiodo, all 1973 graduates and members of the IHSFCA Hall of Fame. Hal Chiodo was joined by brothers Tom and Mark, who, like Hal, played for their father.

It was a sartorial show of respect on a special night organized by former Pioneers Pete Evans and Dave Mizer. They presented Chiodo with framed artwork signed by the players in attendance, and announced that beginning next season, U High’s helmets will include a small football with the initials, FC, in honor of Chiodo.

Moments later, he left his ex-players with this.

“All of you who played for me, you have to realize the reason you’re here tonight is because of you,” Chiodo said. “You’re the guys who played. Congratulations.”

Even on his night, he made it about them.

No wonder they love him.

The daughter of two coaches, Megan Jones had a game plan. How could she not? When your mom and dad have a basketball court named after them, y…

The norm in Bloomington-Normal the last 42 years has been winning and winning big. That’s the lucky part for those of us who have toted Pantagraph press passes.

Kindred: Former University High coach Jim Scott 'was the epitome of what a coach was'

It’s been a long time since they played for Jim Scott. For Derek Johnson, it’s been since 1989.

Watch now: Ridgeview-Lexington runs past Abingdon-Avon and into 1A semifinals

Ridgeview-Lexington's powerful running game was too much for Abingdon-Avon.

Asked what Tolono Unity’s berth in the state championship game would mean to Jordan Reinhart, LeRoy coach B.J. Zeleznik replied, “Oh man, he would have been ecstatic.”

Kindred: 3 generations of Meisses team up for El Paso-Gridley basketball

Father and son are back on the same team — Nathaniel Meiss as head coach and Tim Meiss as a volunteer assistant with El Paso-Gridley. 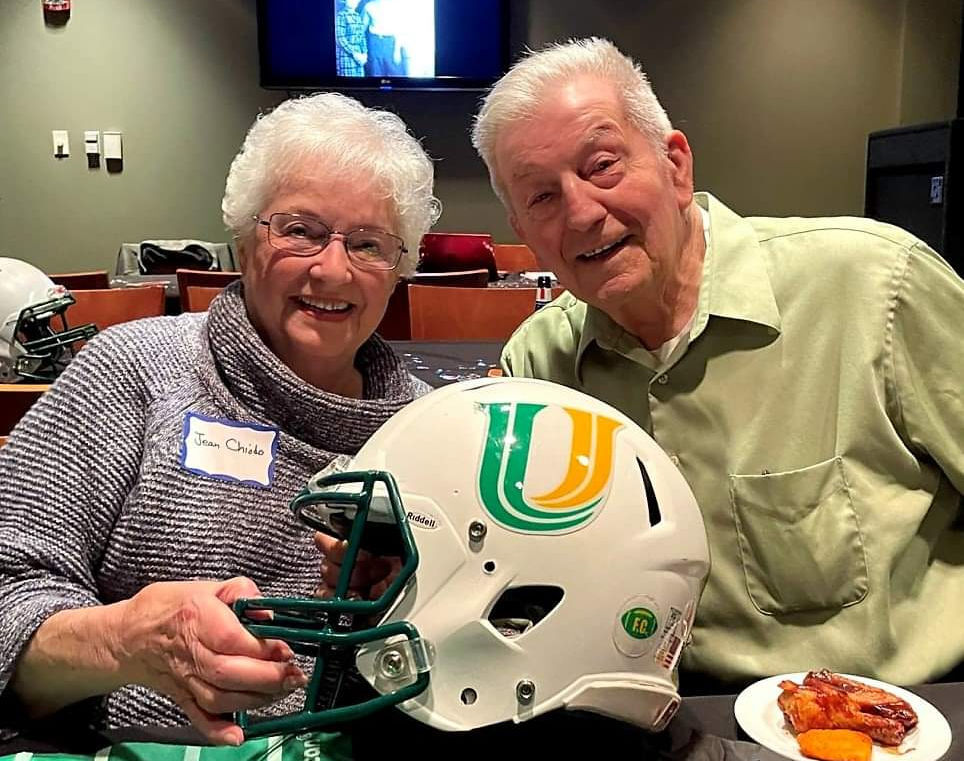 Former University High School football coach Frank Chiodo (right) and his wife, Jean, enjoy a moment during a celebration of Chiodo's career Saturday night at Baxters American Grille in Bloomington. It was announced that beginning next season, U High's helmets will include a small green football with Chiodo's initials, FC. 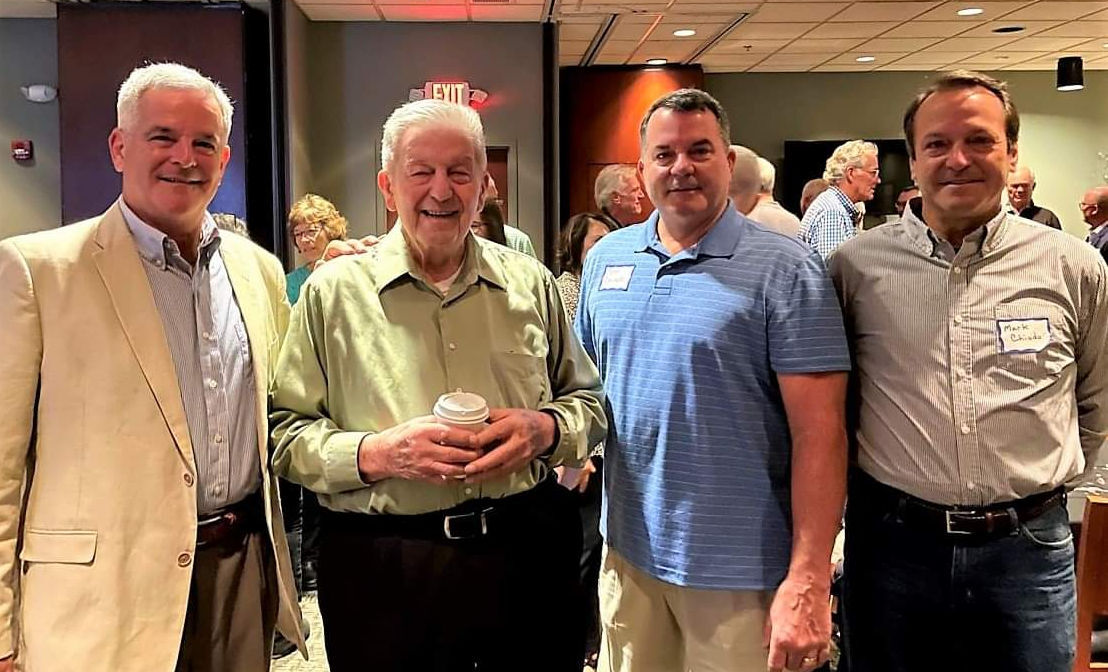 Among the former players at Saturday's celebration of Frank Chiodo's University High School coaching career were his sons from left, Hal, Tom and Mark. 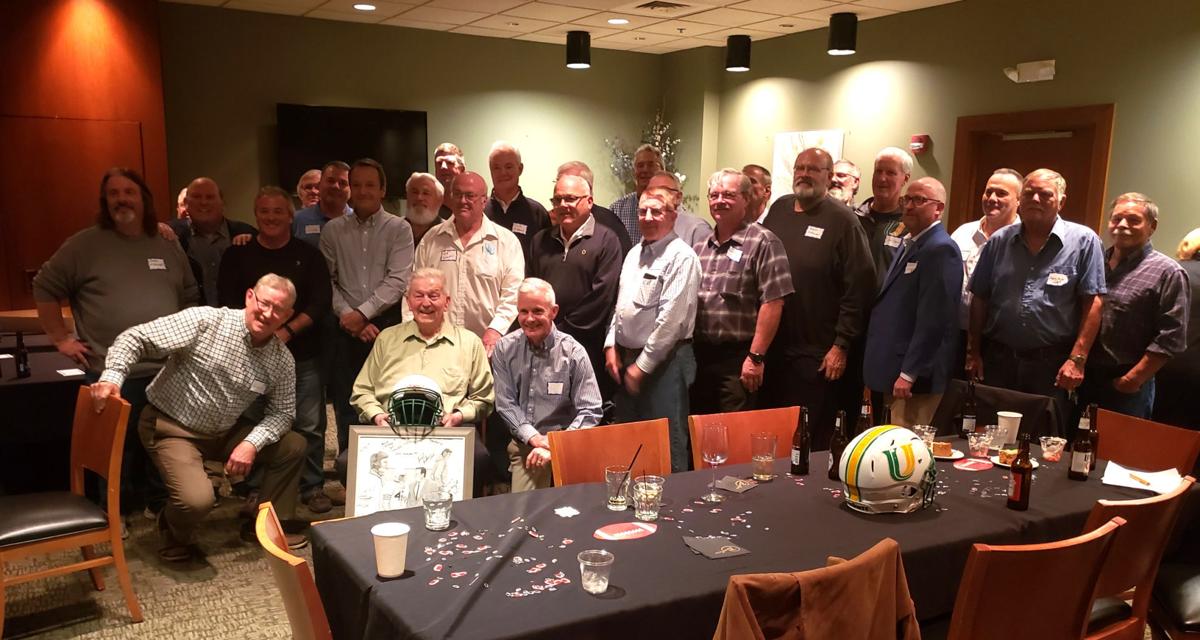