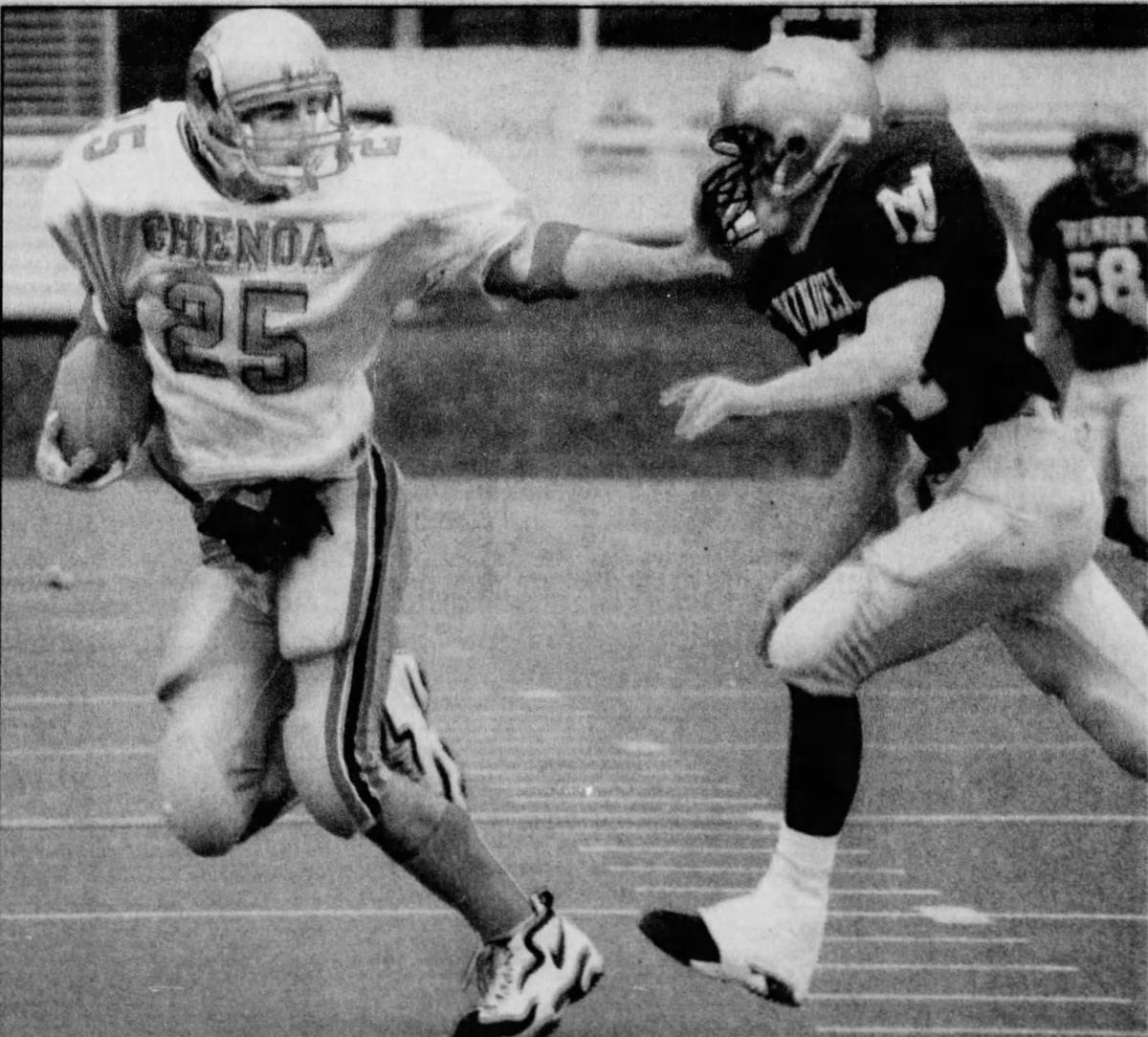 Chenoa's Darren Bressner stiff-arms Northwestern-LaHarpe's David Spencer after catching a pass in Chenoa's 35-28 victory in the Class 1A state championship game on Nov. 29, 1996 at Hancock Stadium. 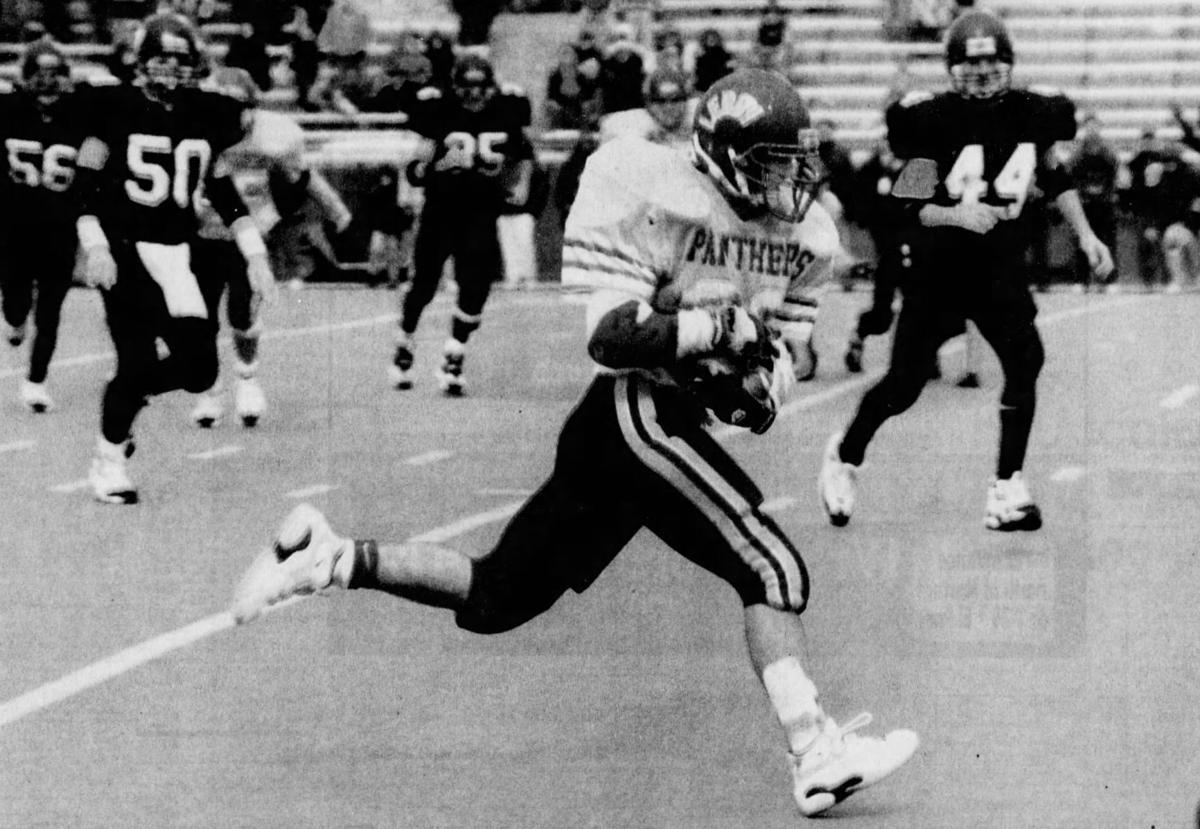 LeRoy's Jake Roop runs in for the game-winning two-point conversion in the fourth quarter of the Panthers' 16-14 Class 2A state championship game victory over Central A&M on Nov. 29, 1996 at Hancock Stadium.

As high school football’s regular season reaches the halfway point — yes, already — a thought occurred Monday to a retired sports editor. About this time every year, in the Pantagraph sports department we would begin to speculate on how many playoff teams we would have.

The goal was a “manageable” number … enough to generate excitement and readership in area cities and towns, but not so many as to outkick our coverage capabilities.

The hope was to have a team or two advance deep into the postseason, ending in the state championship game. Newspaper racks (remember them?) would sell out quickly in the impacted area towns.

The perfect scenario? That occurred 25 years ago this fall, when we chronicled magical playoff runs by Chenoa (Class 1A) and LeRoy (2A). They earned state championships in back-to-back games on Nov. 29, 1996, at Hancock Stadium.

At the time, with the finals in Normal and newspapers in demand, we had the manpower to cover each of the state title games. What better than to write about an area team winning in dramatic fashion?

Chenoa and LeRoy came through on that glorious day.

Yours truly reported on the Chenoa win, a rather awkward thing when your wife and many in her family were from LaHarpe. Duty demanded the story be impartial, so it was. The game was terrific to the end, which came when Chad Seeman’s interception snuffed out Northwestern-LaHarpe’s final possession.

The win capped a 12-2 season for Chenoa under Coach Dean Magro. The school would be absorbed into Prairie Central a few years later, making the 1996 title one of the last great Chenoa memories.

It was fun being along for the ride.

“It means a lot because for three years the kids have devoted their lives and I’ve devoted my life to this,” Magro said that day, still wet from a celebratory ice water dousing. “Hard work pays off, but you can’t do it if the kids don’t want to do it.”

LeRoy had not trailed by 14 points all season. Facing that deficit entering the fourth quarter, the Panthers came back to break Central A&M hearts for the second year in a row. A&M had lost 20-18 to Hampshire in the title game a year earlier. Now this.

For LeRoy and co-op partner Tri-Valley, the win capped a 14-0 season that was so much fun … never more than on its final day.

Coach Jim Zeleznik said afterward he stressed to the Panthers at halftime to “believe in themselves” and to “have fun.”

“I told them, ‘This is your last game, your last half. Most of you will never play football again. Go out and have fun,’” Zeleznik said. “I know I had fun today. Even when we were losing late in the game, I looked at Reed (senior linebacker Reed Hartman) and said, ‘You having fun?’ He nodded his head yes and I said, ‘I am too.’”

Our colleague Doug Hamm, who is now deceased, also quoted a Central A&M player in his game story. The name is familiar. The previous year, Wes Temples was a junior defensive back for the Raiders. On this day, he was a senior quarterback.

We know him here as the former head football coach at Normal Community and now athletic director at Normal West.

“I joke with people up here and anybody from over there who I know that for three quarters, it was a lot of fun,” Temples said Tuesday. “I can’t believe it’s been that long ago.

“The loss wears off, but the memories of getting to play with those guys stay with you. Not many people get to be in that type of an environment. Obviously, LeRoy did a lot of good things to close it out. They were an unbelievable team. It’s a memory you’ll never forget. As a parent, you hope your kids get to go through something similar.”

There are reminders of the LeRoy loss at Normal West. Assistant football coaches Duane Thoennes and Darren Hess were on the LeRoy staff in 1996.

Temples said they have talked about the game, adding, “I try to cut them off after three quarters.”

“I guess you know it’s been that long ago, but you don’t feel like it has,” Temples said. “I can tell you just about everything that happened in that game like it happened last week.”

It was a memorable day at The Pantagraph, too. Photos and stories from the games were splashed on the front page as well as in the sports section. The huge headline on page 1 screamed, “STATE CHAMPS!”

The calendar insists it was 25 years ago. Wrinkles in the mirror support that claim.

Yet, in the heart and mind, it “happened last week.”

Photos: Bloomington and Normal West go down to the wire

Kindred: The pudgy 6-year-old inside says farewell, thank you to Mike Shannon

Among my connections to youth is the familiar radio voice of St. Louis Cardinals baseball, Mike Shannon. At 82, his best days are long past and that’s OK. At 63, so are mine.

Tim Stuckey likened it to being “stuck in a hole.” You dig into the sidewalls with your fingers and toes in hopes of climbing out, but keep sl…

Kindred: Justin Fields plays well, and needs to play on as Bears’ starter

Justin Fields was outstanding on Sunday. He was electric. His accuracy on deep passes was uncanny and completely un-Bearlike.

Rudy Klokkenga’s love affair with softball began on fields where wooden benches served as “dugouts.” There were no press boxes, either. You do…

Chenoa's Darren Bressner stiff-arms Northwestern-LaHarpe's David Spencer after catching a pass in Chenoa's 35-28 victory in the Class 1A state championship game on Nov. 29, 1996 at Hancock Stadium.

LeRoy's Jake Roop runs in for the game-winning two-point conversion in the fourth quarter of the Panthers' 16-14 Class 2A state championship game victory over Central A&M on Nov. 29, 1996 at Hancock Stadium.