Monday Night Football: Scores and updates from Steelers vs. Colts

He held it high.

Even in defeat — even in convincing defeat — there was obvious pride among the vanquished Mustangs.

Camp Point Central was powerful, potent and precise and too much for Ridgeview-Lexington in a 44-8 victory.

“They were the better team today,” Whitehill said. “We weren’t ready and it shows by the score. They came out and were ready. We weren’t mentally ready. They played their best and we didn’t play our best. That’s about it.”

No. 2 Ridgeview-Lexington (12-1) bowed out in the semifinal round for the second straight season.

“We haven’t had a bad day all year. But today we just didn’t have it,” said Mustangs coach Hal Chiodo. “From play No. 1 it was oh, my Lord, they blew us off the ball. We’ve usually been able to figure out a way to change it. But they destroyed us at the line of scrimmage. That’s where it all started and finished.”

The Panthers methodically marched to five first-half touchdowns, amassing 289 yards on the ground and 332 total in the opening half to 47 yards of offense for the Mustangs.

“It started with the first drive. We thought they would sit in that 4-4 (front),” Camp Point coach Brad Dixon said. “We had some things we liked against it. We just kept churning them out and getting stops the first half. That was huge.”

The Panthers found the end zone on a 6-yard run by Ross Riley to open the scoring, a 2-yard surge from Drew Paben, a 4-yard Isaac Genenbacher plunge and a pair of 3-yard runs by Riley for a 36-0 halftime lead.

“I was just running straight forward,” said Riley, who finished with 108 yards on 16 carries. “It’s an amazing feeling being a senior. There was no doubt. We never even thought about losing.”

Camp Point extended its advantage to 44-0 in the third quarter on Riley’s fourth touchdown, a 5-yard jaunt.

Ridgeview-Lexington kept the Panthers from their eighth shutout of the season on a 3-yard touchdown rush from quarterback Alec Thomas, who also took home for the two-point conversion.

The Mustangs had the services of All-State tailback Kaden Farrell for only three carries because of an ankle injury. Farrell netted 5 yards.

“That did take a little life out of us because he makes so many plays for us,” Chiodo said. “We know the superstar he is. I don’t know if that was it or not.”

Whitehill said the absence of Farrell hurt, but “we played against Tuscola after we lost him, and we played strong the second half.”

Logan Friedmansky rushed for 65 yards on 14 carries and Thomas 40 yards on eight attempts for the Mustangs. Thomas completed 3 of 12 passes for 19 yards.

“Ridgeview is a great team. We had all the respect for them,” said Dixon. “We practiced our butt off all week, and the guys just went out and executed.”

Genenbacher piled up 113 yards on the ground on 15 tries. Paben added 51 yards and Gavin Graves 50 as the Panthers amassed 355 yards rushing.

Friedmansky and Tyler Atkins had 13 tackles each to lead Ridgeview-Lexington.

Photos: Camp Point Central at Ridgeview-Lexington during the Class 1A football semifinal

Dexter Niekamp scores inside for NCHS

Dexter Niekamp scores inside for NCHS 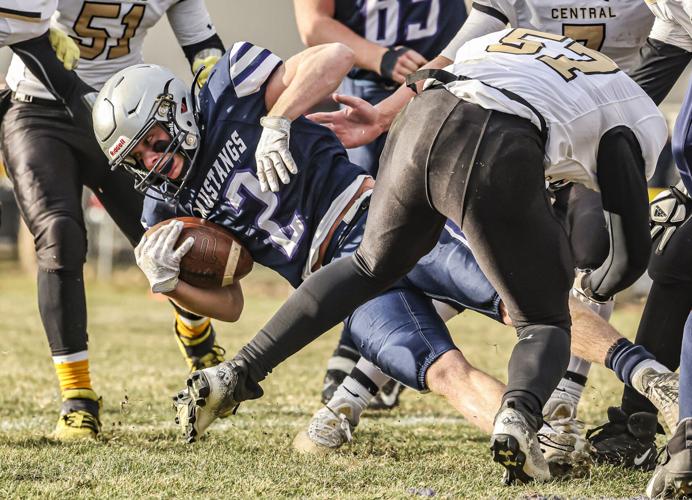 Ridgeview-Lexington's Logan Friedmansky (2) runs against Camp Point Central on Saturday during the Class 1A football semifinal in Colfax. 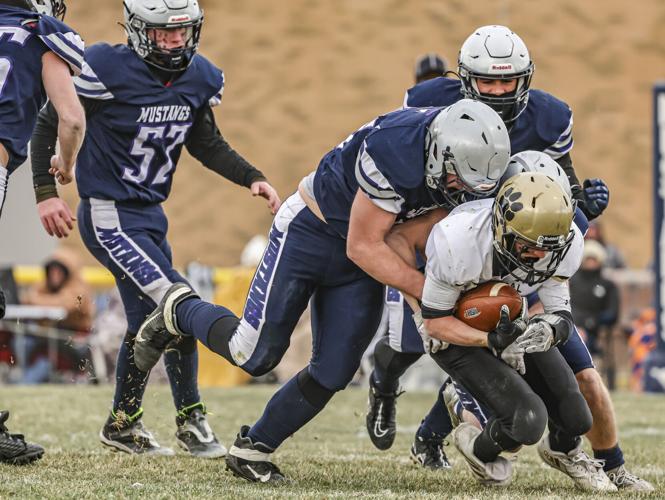 Camp Point Central's Drew Paben (23) is brought down by Ridgeview-Lexington's Tyler Atkins (65) on Saturday during the Class 1A football semifinal in Colfax.