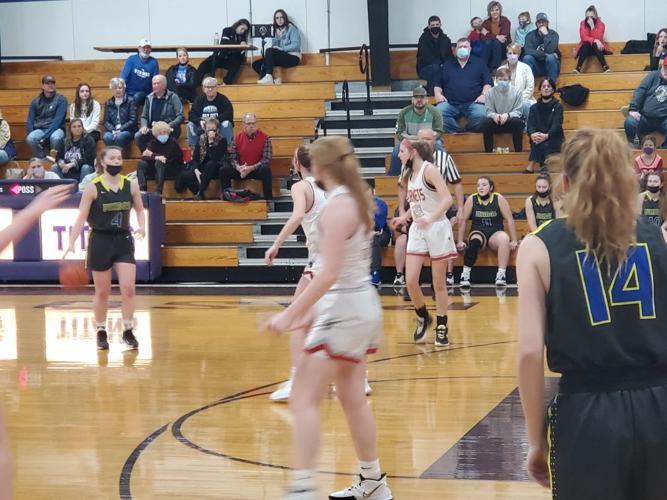 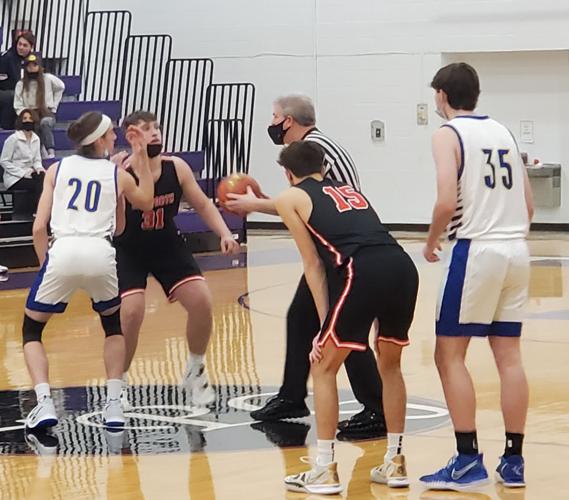 Heyworth's Nick Feather (31) and Tri-Valley's Lucas Amend (20) prepare to jump at the start of Saturday's McLean County Tournament at El Paso High School. Heyworth took a 48-36 win over the Vikings.

EL PASO — Teams playing during Saturday's opening round of the McLean County Tournament at El Paso-Gridley High School all had the same goal.

Get a chance to play on a college court.

While the top three seeds in the boys and girls divisions enjoyed first-round byes, the other schools needed a win to advance to Illinois Wesleyan's Shirk Center (boys) and Eureka College's Christine Bonati Bollwinkle Arena and Convocation Center (girls) for quarterfinal games Monday and Tuesday.

Here are seven takeaways from Saturday's action in the 110th tourney that returned after being canceled last year because of the pandemic.

The opening boys game featured a player who should be prominent the next couple seasons.

Nick Feather, a 6-foot-7 sophomore who transferred from Clinton, contributed 20 points and 10 rebounds as ninth-seeded Heyworth downed No. 8 Tri-Valley, 48-36.

The Hornets broke away from a 20-all halftime tie by outscoring the Vikings, 18-8, in the third quarter.

"We did a better job of pressuring their guards," said Heyworth first-year head coach Lyndon Jason. "They did a good job of getting the ball in the post (in the first half) and we struggled defending it."

Jason said this was the healthiest the Hornets have been since the fifth game of the season as they evened their record at 9-9. Their reward is a matchup against No. 1-seed El Paso-Gridley in Monday's quarterfinals.

Heyworth and Tri-Valley also squared off in a girls first-round game. It was another sophomore who was the star, too.

Tri-Valley sophomore Kelsey Bartels scored a career-high 24 points as the No. 10 Vikings edged No. 7 Heyworth, 46-44, in the day's closet game.

"For a sophomore to be our point guard, she takes a lot of responsibility," said Tri-Valley head coach Brent Ward. "She played under control tonight and made good decisions with the ball and ran our offense efficiently."

Heyworth had beaten Tri-Valley by three points in a game before Christmas at Downs. Ward expected another close battle.

"It was pointed out to me we had not won a first-round girls game in a long time. This is my first county tournament as head coach," he said. "I didn't have that historical perspective. But they got off to good start. I'm very proud of them. We had some defensive breakdowns during the game they were able to learn from and fix, so they (the Hornets) couldn't capitalize on those again."

This will be the final McLean County Tournament for Fieldcrest boys head coach Matt Winkler. He's thankful to be getting one more chance to play at Shirk Center.

Winkler, the only head coach in Fieldcrest's 30-year history, is retiring after this season. The Knights (3-8) played in their first McLean County tourney when the Heart of Illinois Conference began running the event in 2007 and have won three titles.

"It's special going back to the Shirk," said Winkler. "We're young. Our kids play hard and are getting better and better every game."

Winkler said the Knights quickly found out the tournament carried extra meaning to teams from school such as LeRoy, Heyworth and Tri-Valley. Players from those schools had grandfathers, fathers and brothers who played in the tourney.

Fieldcrest has started to develop that appreciation, too.

"I love this tournament. It's always been special," said Winkler, who will be succeeded by assistant coach Jeremy Hahn. "Seeing all the coaches and friendly faces around the area and being here scouting all day long is great. It's bittersweet just like this season. I'm going to miss it. But at the same time, I know it's time for me to step away and let Fieldcrest hear a new voice."

The 6-3 Homann enjoyed a special night against Heyworth on Jan. 7. He scored 46 points to break Alston Whitaker's school record of 44 that had stood since 1964.

"Going in we were missing three big guys that got good minutes, so I knew I was going to have carry a bigger load," said Homann. "I started off hot with 15 points in the first quarter. I had to keep it going if we were going to have a shot to win."

Thomann said he was well aware he was within striking distance of the school mark thanks to a teammate.

Homann missed a free throw which could have set the mark before a fast-break layup secured his place in Dee-Mack history.

"All my work that I put into something that can be tangible is awesome and amazing," he said.

With only two girls sitting on the bench, Flanagan-Cornell/Woodland girls coach Danielle Edens knew the seven-player Falcons had their work cut out for them  against Deer Creek-Mackinaw.

The Chiefs began pulling their starters in the third quarter. A running clock was used the entire fourth quarter as Dee-Mack rolled to a 54-24 victory.

"We had three that were out sick and one has to take a couple weeks off," said Edens of her depleted roster. "You tell them to work hard and never quit. I kept telling them that. It's hard going into games this year losing by more than 20. It's hard to keep your heads up. One thing I can ask is never quit."

FCW, which has two victories this season, rotated players in and out of the lineup to try and stay somewhat fresh. But Dee-Mack wore down the Falcons.

"They were tired," said Edens. "I had a couple in a little foul trouble and wanted to keep them for the end of the game."

Lexington on a run

It took a while for Lexington's football players who reached the Class 1A semifinals in the Ridgeview-Lexington co-op to get their basketball legs and rhythm going.

The fifth-seeded Minutemen stretched their winning streak to seven with a 59-40 victory over No. 12 Ridgeview as Ben Peacock led the way with 19 points and Alec Thomas added 13

"We're playing together. These guys have been together four years now," said Lexington head coach Doug Yoder. "When we pass and move the ball, we're one of the better teams. They don't care who scores the points. We have four guys averaging double figures. Our point guard, Logan Friedmansky, gets after it on defense and the other four score."

Yoder, in his second year as head coach after moving from Olympia, said getting to the Shirk Center is a big deal for the Minutemen.

"We were supposed to play up in the United Center (in Chicago) and that got canceled," he said. "That (going to Shirk Center) was one of our goals. Our goal in January is to be undefeated. Lexington can't remember when they've been a single-digit seed. It's been a long time for Lexington being in the Shirk Center.

The third-seeded Eureka girls are going after their fifth straight title with Ellie Cahill leading the way.

Eureka, which beat previously unbeaten and No. 1 seed Fieldcrest last week, faces No. 6 Ridgeview at 5:30 p.m. Monday. The Mustangs advanced Saturday by beating No. 11 Fisher, 49-21.

Fieldcrest assistant coach Isaiah Tubbs took over for Mitch Neally as the No. 1-seeded Knights rolled in the McLean County Girls Tournament quarterfinals.

Tremont put No. 2 seed Eureka to the test.

Heyworth's Nick Feather (31) and Tri-Valley's Lucas Amend (20) prepare to jump at the start of Saturday's McLean County Tournament at El Paso High School. Heyworth took a 48-36 win over the Vikings. 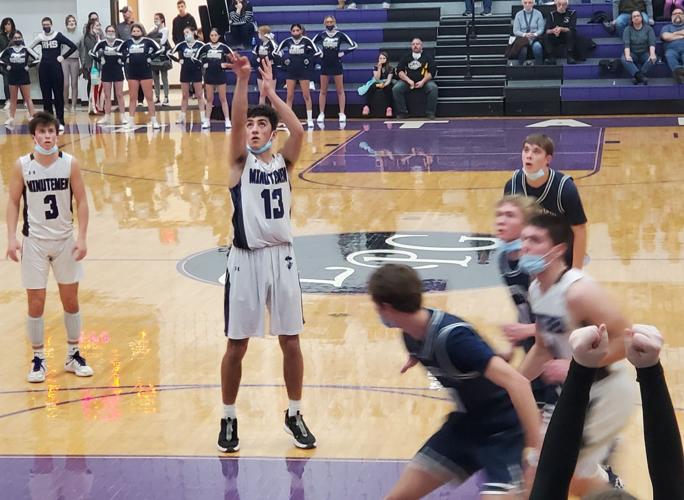 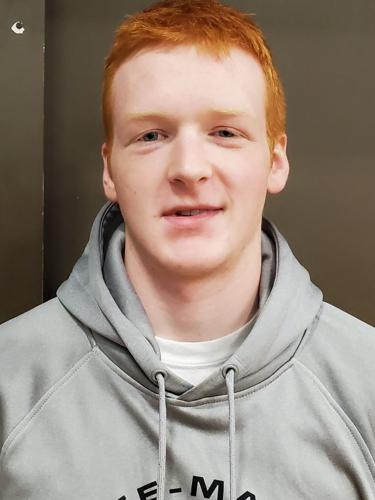