Rodney Kellar wouldn’t divulge the veteran basketball coach who took a shot at his school, and at him, during a conversation in the mid-1990s. Kellar is too classy for that.

He left it at this: The person was “a pretty high-up guy at the time in the coaching circles.”

The unnamed coach asked Kellar, who had been a head coach for about 10 years, where he was coaching. When Kellar replied “Ridgeview,” the coach said, “How big a school is that?”

If you know Kellar, it doesn’t take much to light his competitive fire. Getting out of bed usually is enough. Now he had something else to stoke the flames.

“Everybody has to have that thing that drives them,” Kellar said. “Ridgeview is like Bloomington, Normal or any school … it is what you make it, right? As long as you have someone to share it with, which I do with my wife (Teri) … it’s everything to us and that’s all that matters.”

In a literal sense, Kellar has gone nowhere. He is in his 32nd season as Ridgeview head coach after three years at Octavia. That’s 35 years in his hometown of Colfax.

In every way that matters, Kellar has gone to a place few coaches go, a level of success and fulfillment that would be the envy of most anyone … even that condescending, unnamed coach.

He has built a 664-310 record and been inducted into the Illinois Basketball Coaches Association Hall of Fame. Beyond that, he has given back to the game he loves, filling a variety of roles in the IBCA for 24 years. He has mentored players and young coaches the way his father, Leon Kellar, and the father of two-class basketball in Illinois, Chuck Rolinski, mentored him.

He has done it with class, dignity and a willingness — even an eagerness — to listen to others and make everyone feel respected and valued. Kellar saw those qualities in Rolinski, the former IBCA executive director who founded the organization and was a highly successful coach at Toluca.

Now, fellow IBCA members see them in Kellar. They have chosen him to receive the Chuck Rolinski Lifetime Achievement Award at the 2021 IBCA Hall of Fame banquet, which has yet to be scheduled because of the coronavirus.

“I’m pretty humbled by it all,” Kellar said. “There are a lot of people in our organization who are just unbelievable and are more deserving than I am. But I appreciate the recognition and I’m honored, especially with the link to Coach Rolinski.”

Rolinski, who died in 2014 at age 82, convinced Kellar in the 1990s to take an active role in the IBCA — “It was maybe his appreciation for the small-school guy a little bit,” Kellar said — and showed him what matters most. That is, it wasn’t enough to have a passion for basketball and knowledge of the game. You had to build personal relationships on your team, in your school, in your community and within the IBCA.

“That was the thing about Coach Rolinski. It didn’t matter what part of the state you were from, he treated everybody with great respect. He knew everybody’s name,” Kellar said. “He was more than a basketball coach in that respect. He was a mentor for a lot of people in our organization and in turn they helped out other people.

“He was the heartbeat of our organization. He gave me the opportunity to get involved in the IBCA, which I’ll forever be grateful for.”

Kellar’s involvement began as an assistant director to Lincoln coach Neil Alexander. He moved up from fourth vice president to first vice president, has served on the IBCA executive board for several years, was head coach for the IBCA All-Star Game, is co-representative for District 5 with Central Catholic girls coach Debbie Coffman, and is on the Basketball Museum of Illinois board.

Among Kellar’s contemporaries has been 29th-year Fieldcrest coach Matt Winkler, also an IBCA Hall of Famer. The two have squared off frequently in Heart of Illinois Conference play and the McLean County Tournament.

Both are competitive, intense and desperately want their players to succeed. That has led to a familiar question for Winkler.

“A lot of people have asked me, ‘How do you get along with Coach Kellar?’” Winkler said. “We get along great. We are friends. When we’re coaching against each other, we’re so competitive, we don’t want to lose. After the game, we’re back to being friends. It’s that simple.”

“It has been my utmost privilege and pleasure to coach against him all these years. I can’t say enough good things about him. I wish him nothing but happiness and congratulate him on the Chuck Rolinski Award.”

As for that unnamed coach years ago, Kellar holds no grudges.

It helped drive a driven coach. And what a ride that has been.

Running down a dream took William Tinsley to Thailand and Indonesia. He hopes to resume that pursuit as soon as the COVID-19 pandemic allows.

Of all the gymnasiums in the Pantagraph area, here are one observer's favorites

Gymnasiums are about much more than bleachers and scoreboards. The fans, the players and the coaches are what makes them special. Take a look at Randy Reinhardt's top 10.

Kindred: Tinsley earns way back on floor for Redbirds

William Tinsley had slipped from starter to observer. For two games — fully healthy and in full uniform — he observed every minute from the Il…

Ridgeview falls short in 4th quarter in 1A super

NORMAL — Even in a nightmare, it was 5 minutes, 30 seconds the Ridgeview High School basketball team could hardly have imagined.

Kindred: Label of 'farmers, hicks' was badge of honor for Olympia's students, athletes

Being on same stage with Central Catholic and University High was wonderful for Olympia High School. Those days will end with Spartans moving to Sangamo Conference in 2022.

Kindred: Can we get to ‘merry’ in a COVID Christmas? We have to try

It rolls off the tongue as December churns toward January. We say it to friends and extended family on the phone or on Zoom or from behind a m…

Rodney Kellar gave himself a 'C' for his retirement speech to his team last week. Everyone else would give him an 'A+' for his 35-year run as Ridgeview's head basketball coach. 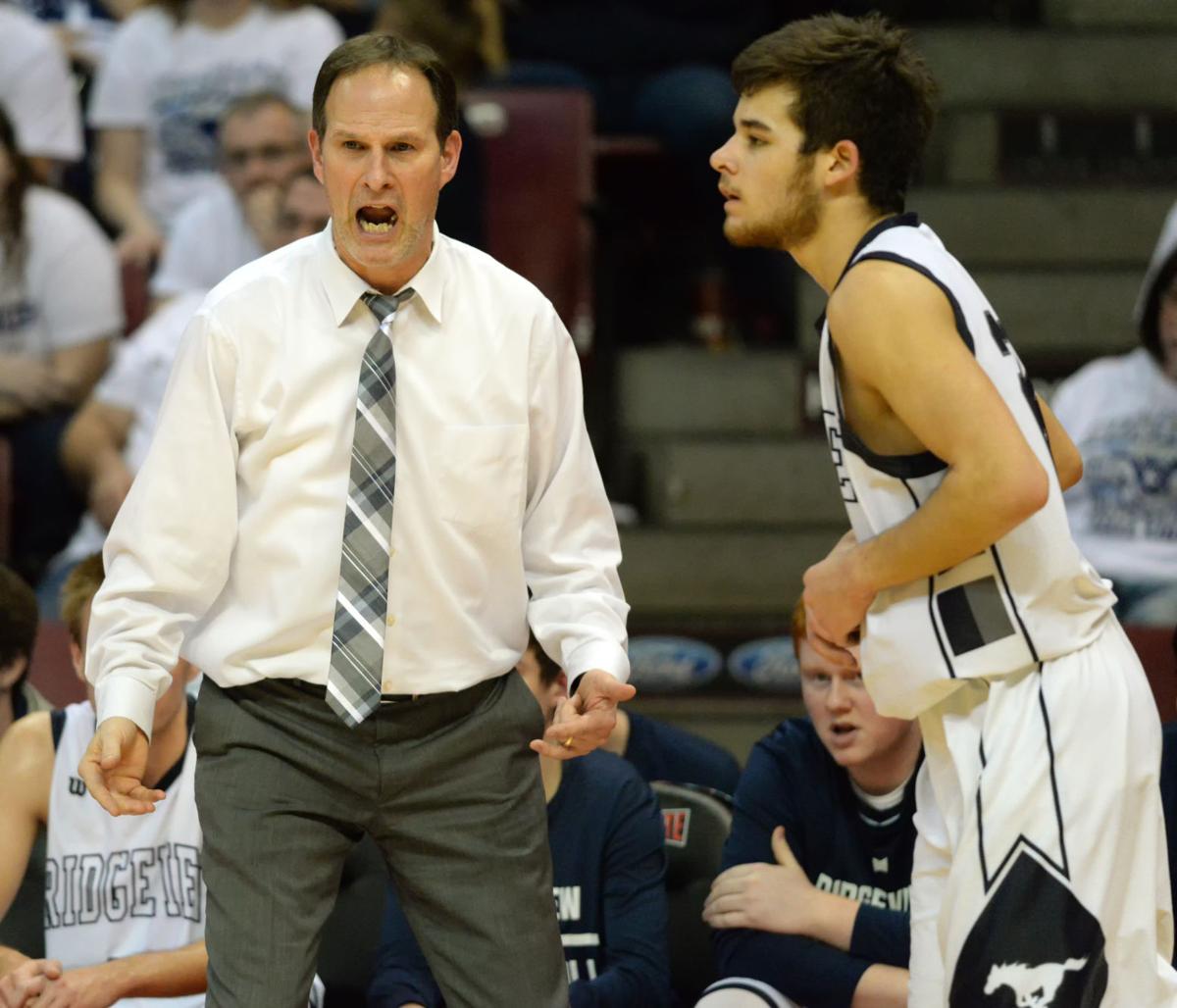 Ridgeview coach Rodney Kellar yells to his players as Corey Graham waits for a pass during the fourth quarter in 2017. Kellar is one of three HOIC coaches with 600 wins.