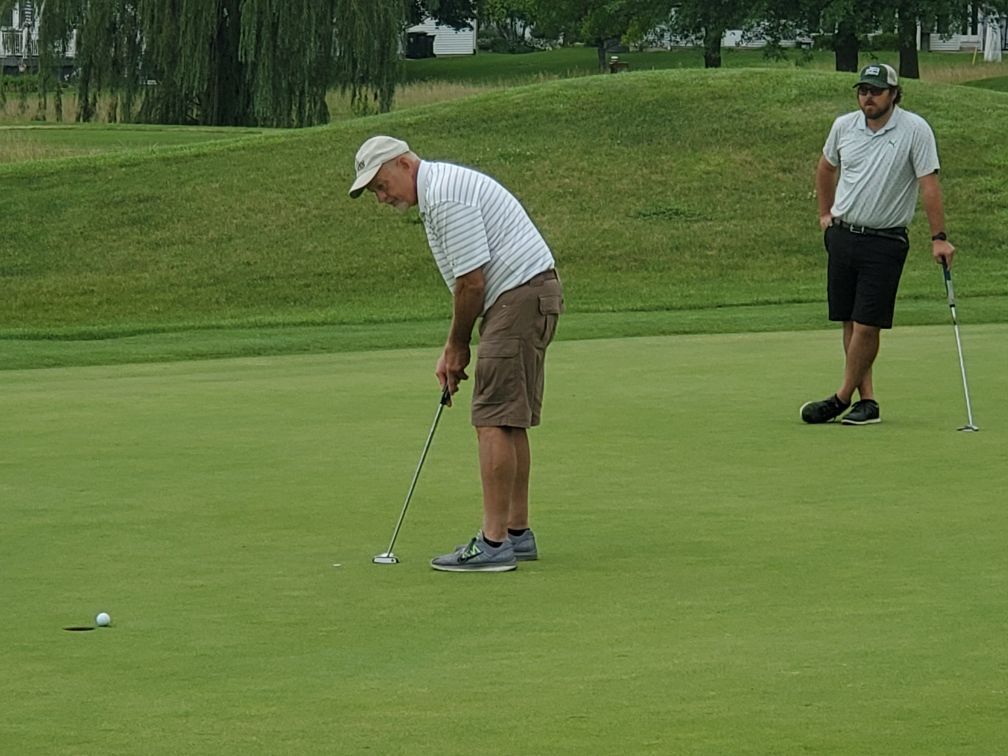 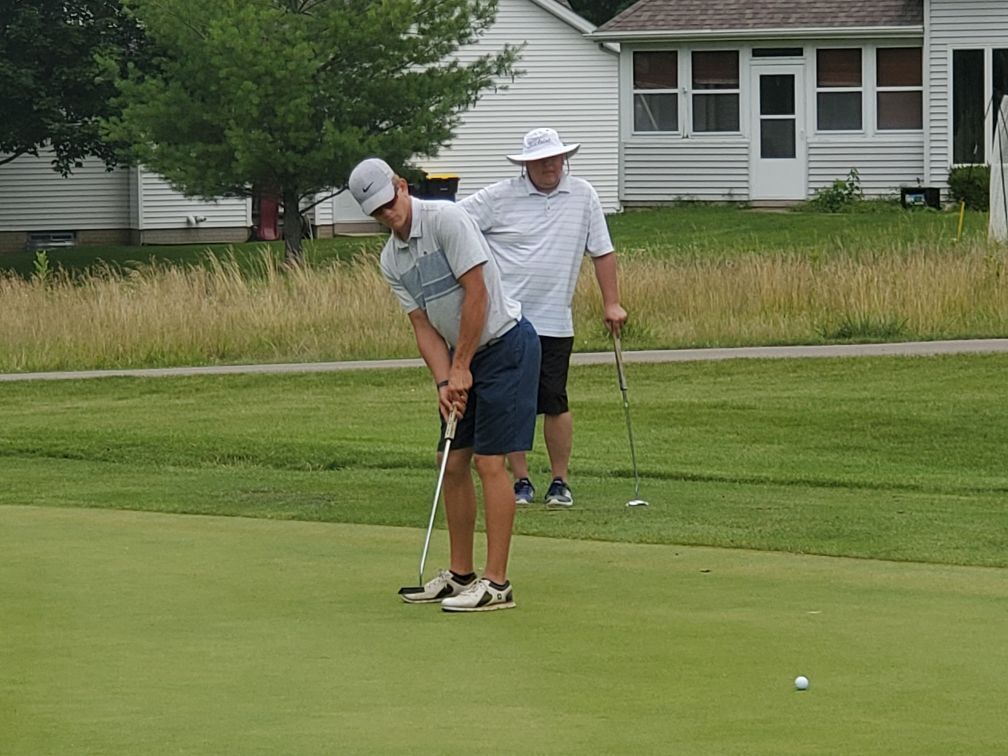 Evan Hutson rolls in a long birdie putt on No. 18 as his father and partner, Chad, watches during Friday's Bloomington-Normal Two-Man Best Position qualifying at Ironwood Golf Course. The Hutsons fired a 66.

NORMAL — Michael and Branden Mounce weren't exactly on medalist pace at the beginning of their round Friday at Ironwood Golf Course.

"We parred 1 and 2, so it was a good start," deadpanned Michael Mounce.

What followed was nine straight birdies. That got the twins on their way to a 13-under-par 59 in the Bloomington-Normal Two-Man Best Position first-day qualifying that was later equaled by City Match Play champion Brian Zimmerman-Ben Kilborn and John McGrew-Tyler McNeely.

The final qualifying round is Saturday. The low 31 qualifiers join defending champions Adam Havens and Dustin Wickenhauser in the championship flight for matches, with 16 teams in other flights.

This is the third time the Mounces have played together in the Two-Man. Michael Mounce was runner-up last month in the City Match Play while Branden is playing his first tournament of the summer.

"A couple wayward shots, but overall it wasn't too bad," said Branden Mounce. "It's not too hard with a good partner."

It's a far cry from when the Mounces, 24, were at El Paso High School and Bradley and their whole summers revolved around tourneys. They took second in the 2018 Two-Man.

"We don't really have any (expectations)," said Michael Mounce, who played in last year's Two-Man with their father, Jim. "We don't practice as much as we used to so there's no sense getting mad."

That was put to the test early. They had only 70 yards to No. 1, but couldn't get their approach within 20 feet. Then the Mounces missed a 10-foot birdie putt on No. 2.

Things quickly changed. After the nine-birdie blitz there was another lull with three straight pars from Nos. 12-14 before finishing with four birdies in a row.

"We made some putts. We switched up the batting order quite a bit," said Michael Mounce. "He made a couple 20-footers. It was fun."

Branden Mounce also was happy with his game off the tee.

The Mounces were the second group off in the morning and didn't expect their score would hold up playing from the regular tees with soft, receptive greens.

"The tees made a huge difference today," said Michael Mounce. "From the back tees (in matches) it will play three shots harder."

Zimmerman, who won his second straight City Match Play at Prairie Vista Golf Course, and Kilborn made the turn at 6-under after missing a 15-foot birdie putt on No. 9.

After another birdie miss on the 10th, Zimmerman sank an uphill 15-foot eagle putt on No. 11.

"We had to make that one to keep up with the Mounces," said Zimmerman.

They got to 11-under going to the par-5 17th and had a 20-foot eagle chance but missed. Then they drove to the back of the green on the par-4 18th but couldn't chip in and had to settle for birdie to tie the Mounces.

Zimmerman has enjoyed a solid summer. This week, he finished two strokes out of qualifying for the U.S. Amateur at Weibring Golf Club, shooting 67 in the second round.

Last year was the first year Zimmerman and Kilborn teamed up in Two-Man. They promptly dropped their first-round match to teenagers Jackson Yoder and Reece Tennison.

"Don't underestimate anybody," said Kilborn of the lesson they learned. "It's the old cliche of taking one match, one shot, one hole at a time. We got a little ahead of ourselves, and those young kids started making everything.

"We've been looking forward to this one. We know what we're capable of. We're calling ourselves 'The Redeem Team.' "

McNeely, 33, is playing in his first Two-Man since he and father Mike shot 60 in qualifying in 2005. He moved back to the Twin Cities 2½ years ago from the Quad Cities, but just recently got his amateur status back after turning professional while he was playing baseball.

"Up there they didn't have the community atmosphere like Bloomington-Normal has," said the long-hitting McNeely of the Quad Cities. "There wasn't anything like this to enjoy."

McGrew said playing with McNeely "is great ... he's 80 yards past me. It's amazing." Smiling, McGrew said, "But he has to hit more than two fairways."

McNeely pulled off the shot of the day on No. 14. He sank his second shot from 60 yards for an eagle. He and McGrew lipped out an eagle putt on the 17th to get to 13-under, but neither had a good drive on No. 18 and they settled for par.

Give it a kick

Watch now: Teenagers Barger, Barker find no problem in getting to Two-Man semifinals

Teenagers TJ Barger and Matthew Barker are playing like veterans and cruised into the Bloomington-Normal Two-Man Best Position semifinals.

Mike Henry's putter was on fire on the back nine and carried him and partner Rob Wuethrich to a semifinal win in the Bloomington-Normal Two-Man Best Position.

Ben Kilborn wasn't confident about his game beforehand, but shot a 5-under-par 67 to grab the Bloomington-Normal Medal Play first-round lead by two strokes.

Watch now: Bears and Browns, by the numbers

Watch now: Bears and Browns, by the numbers

Watch now: Take a behind the scenes look of the ESPN 'College GameDay' set

Watch now: Take a behind the scenes look of the ESPN 'College GameDay' set

Evan Hutson rolls in a long birdie putt on No. 18 as his father and partner, Chad, watches during Friday's Bloomington-Normal Two-Man Best Position qualifying at Ironwood Golf Course. The Hutsons fired a 66.