“This is Justin’s time.”

Those were Chicago Bears coach Matt Nagy’s words Wednesday as he announced that rookie Justin Fields would be the starting quarterback moving forward.

After making two starts in place of the injured Andy Dalton, Fields will have the opportunity to continue his growth in games from now on, including Sunday’s meeting with the Las Vegas Raiders at Allegiant Stadium.

As kickoff approaches, here’s a snapshot look at the game.

1. Players in the spotlight

The Bears received good and bad news about David Montgomery this week. The running back did not suffer a season-ending injury when he sprained his left knee against the Detroit Lions, but he will miss at least a few weeks.

That means the Bears must turn to Damien Williams and Khalil Herbert to help fill the void left by the injury to one of their most impactful offensive players.

As they tried to get Fields into a better offensive groove against the Lions, the Bears leaned on Montgomery, who had 23 carries for 106 yards. That brought his season totals to 69 carries for 309 yards and three touchdowns with six catches for 49 yards.

Against a Raiders run defense that allows 132 yards per game, the Bears need Williams and Herbert to step up to aid Fields as he continues to grow in the offense.

After opting out of the 2020 season, Williams — a seventh-year veteran who starred in the Kansas City Chiefs’ Super Bowl LIV victory — signed a one-year contract with the Bears to be a complementary piece to Montgomery. Nagy acknowledged that Williams’ proven ability to perform when needed is a comfort without Montgomery.

“He understood his role coming in here and that it was complementary to what we were doing with David,” Nagy said. “But, yes, you go back and you say, OK, big-time moments. He played on a big-time stage and made some big-time plays. The players know that, the coaches know that, so there’s a sense of calm knowing that in this type of situation he can step in.”

Williams has 16 carries for 73 yards and a touchdown and eight catches for 41 yards in the first four games. He suffered a quadriceps injury against the Lions but practiced in full all week.

Herbert, a sixth-round pick out of Virginia Tech, spent most of the first four games on special teams, including returning nine kickoffs for 254 yards. He got three carries for 7 yards against the Lions after Williams was injured.

“He’s a smart football player that makes a lot of plays,” Nagy said. “He’s also a physical running back too. He’s very patient. He sees the holes when he’s running. He’s learning.”

The eighth-year Raiders quarterback got into a verbal spat through the media with Los Angeles Chargers defensive end Joey Bosa this week after Bosa said Carr “really gets shook” under pressure.

Bosa’s comments followed the Chargers’ 28-14 victory over the Raiders on “Monday Night Football,” in which Carr threw for 196 yards and two touchdowns with one interception and four sacks.

Carr, who has been sacked 12 times this season, told reporters Bosa was probably just mad because Carr had been talking trash during the game.

“It pissed me off, but that’s not a bad thing either,” Carr said.

The Bears probably don’t need a more motivated Carr, who defensive coordinator Sean Desai said is “playing at the highest level I’ve seen him play.” Carr’s 1,399 passing yards led the league through four games, and he has completed 109 of 170 passes with eight touchdowns and three interceptions.

Desai did not agree with Bosa’s assessment of how Carr handles pressure.

“He handles it really well, and you see that in a lot of games this year,” Desai said. “He can throw the rock. He can avoid. He scrambles to pass, and he has his eyes up the field. They have targets they can hit at all levels of the field, and he can make all those throws. I don’t see any issue with him handling any rush.”

The Bears, who lead the league with 15 sacks, of course will try to change that.

Outside linebacker Khalil Mack was close with Carr when they played together before the Raiders traded Mack to the Bears. They still talk, mostly about fatherhood, but weren’t too friendly this week as Mack gets ready to chase Carr down. Mack said the Bears are “going to have their hands full.”

“I see a growth, especially when they’re sending a lot of people at him,” Mack said. “He gets the ball out. He’s hitting his targets at a very high rate. These guys that he’s got have a lot of speed and they catch the ball in stride and take off. It’s going to be a good challenge for us this week.”

With a potential move to a new stadium in Arlington Heights on the minds of Bears executives and fans, Sunday will be a good chance to look at one of the NFL’s newest homes.

Allegiant Stadium, which cost $2 billion and seats 65,000, opened last year, and this will be the Bears’ first visit.

New Bears returner Jakeem Grant already played there this season with the Miami Dolphins and noted the fast grass, bright lights and loud atmosphere. Bears center Sam Mustipher said he spoke with a former college teammate who played there who also warned of the noise that reverberates through the indoor stadium, making the offense’s work on silent cadences important this week.

It will be another challenge for Fields as he tries to get his first road victory after the ugly 26-6 loss to the Browns in Cleveland, though Bears fans might have a significant presence.

“(Fields) had the experience in Cleveland. The Dawg Pound is loud as well,” Mustipher said. “We are going to see what it’s like this weekend. All I’ve heard is that it’s going to be super loud in there. We are working it during the week as best we can, so hopefully we will be prepared for it.”

When nose tackle Eddie Goldman went back and watched film of his first game with the Bears since the 2019 season, it wasn’t as bad as he thought in the moment.

Goldman opted out of the 2020 season because of COVID-19 and missed the first three games with a knee injury, but he returned to play 31 snaps against the Lions. He said he had to shake off rust and believed there was at least one play he should make down the road as he gets used to games again.

“It was just getting back into the swing of things,” Goldman said. “It was good. Getting the play call, going through that whole thing, looking at my keys to read, stuff like that. It was fast but not too fast.”

Goldman said he thought he got better as the game went on and was upbeat after multiple challenges in his return, including a stint on the reserve/COVID-19 list and a back issue.

The Bears listed defensive lineman Akiem Hicks as doubtful to play Sunday because of a groin injury. Hicks missed practice Wednesday and Thursday and was limited Friday.

Along with Montgomery, tight ends Jesse James (personal) and J.P. Holtz (quad) and inside linebacker Joel Iyiegbuniwe (hamstring) are out.

Mack, who has rib and foot injuries, also returned to practice in a limited capacity Friday. He’s listed as questionable, as are safety Tashaun Gipson (hamstring), tight end Jesper Horsted (knee) and inside linebacker Christian Jones (back).

This game has a lot of wild cards. The Bears defense wasn’t nearly as good last week without lineman Akiem Hicks, and he’s doubtful because of a groin injury. It’s hard to say how the offense will perform in a loud road environment. The Bears were blown out by a combined 40 points in two previous games away from Soldier Field. Perhaps the biggest wild card is quarterback Justin Fields. It’s impossible to say how he will improve on a weekly basis and what the plan from the offensive coaches will be. Fields likely will have some spectacular games as well as some painful lessons. Figure this one falls somewhere in between.

With Robert Quinn playing the way he is, the Bears could make the Raiders pay if they do everything in their power to slow Khalil Mack as they did when the teams met in London in 2019. So the Bears might be able to get to quarterback Derek Carr some. I’m more concerned about the vulnerability of the Bears secondary against several Raiders playmakers. The Bears offense has obvious question marks without David Montgomery, but the Raiders run defense is allowing 132 yards per game. I see Justin Fields leading the Bears to their first road victory.

The Bears have been outscored 60-20 in two road games this season. So even with the excitement that comes with Justin Fields’ full-time promotion to the starting role, the offense has to show much more to earn outside belief. Bears fans should be well-represented at Allegiant Stadium, adding extra electricity. But the Bears remain flawed, particularly on offense. And injuries to David Montgomery and Akiem Hicks only increase the degree of difficulty of this week’s test.

Bears coach Matt Nagy denies report he will be fired

Bears coach Matt Nagy spent half of his Tuesday press conference dealing with a report saying he has been told he will no longer coach the Bears after Thursday's game.

Former Bears defensive lineman, Super Bowl champion and Pro Football Hall of Famer Dan Hampton was arrested on a charge of operating a vehicle while intoxicated in Northwest Indiana.

Aaron Rodgers has a fractured pinkie toe — not “COVID Toe,” a malady associated with COVID-19 that causes red and purple lesions on the feet of sufferers who’ve tested positive for the novel coronavirus, as Rodgers did on Nov. 3.

With rumors about coach Matt Nagy's job status swirling around the team, the Bears edged the winless Lions 16-14. 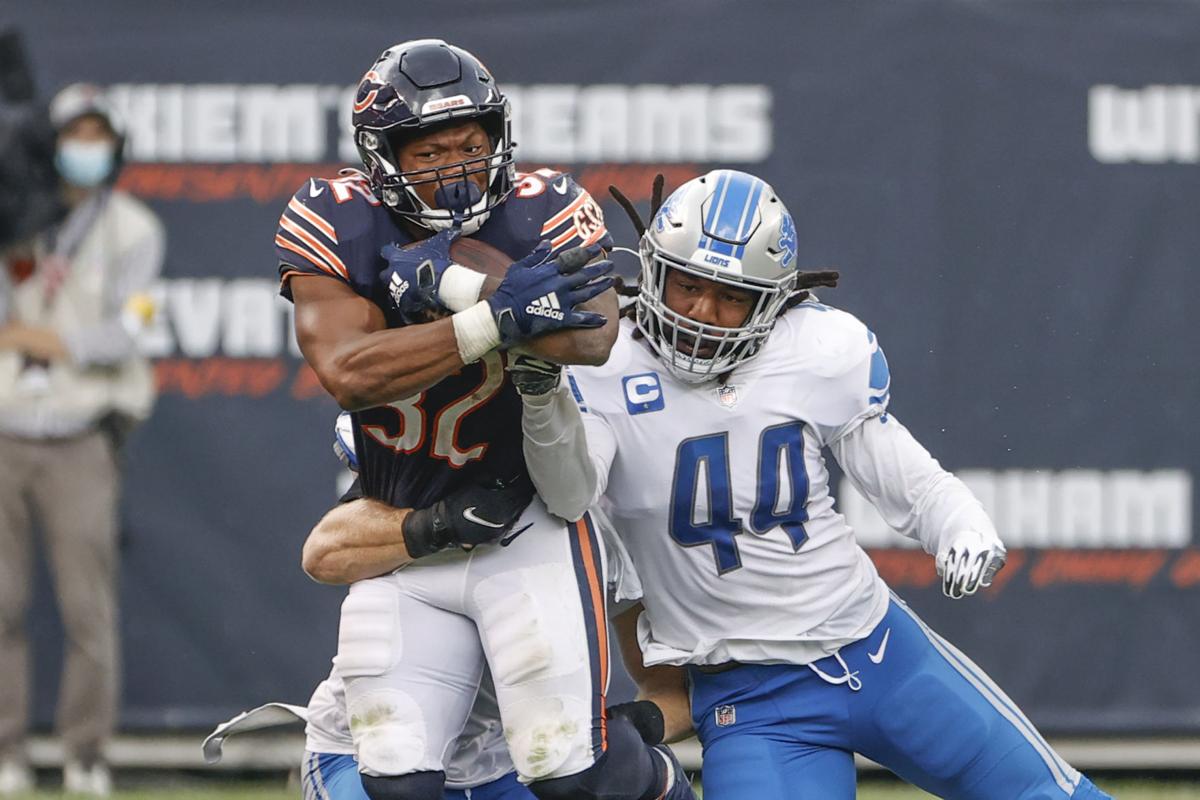 Chicago Bears running back David Montgomery (32) is tackled by Detroit Lions middle linebacker Alex Anzalone, back, and linebacker Jalen Reeves-Maybin (44) during the first half of an NFL football game, Sunday, Oct. 3, 2021, in Chicago. 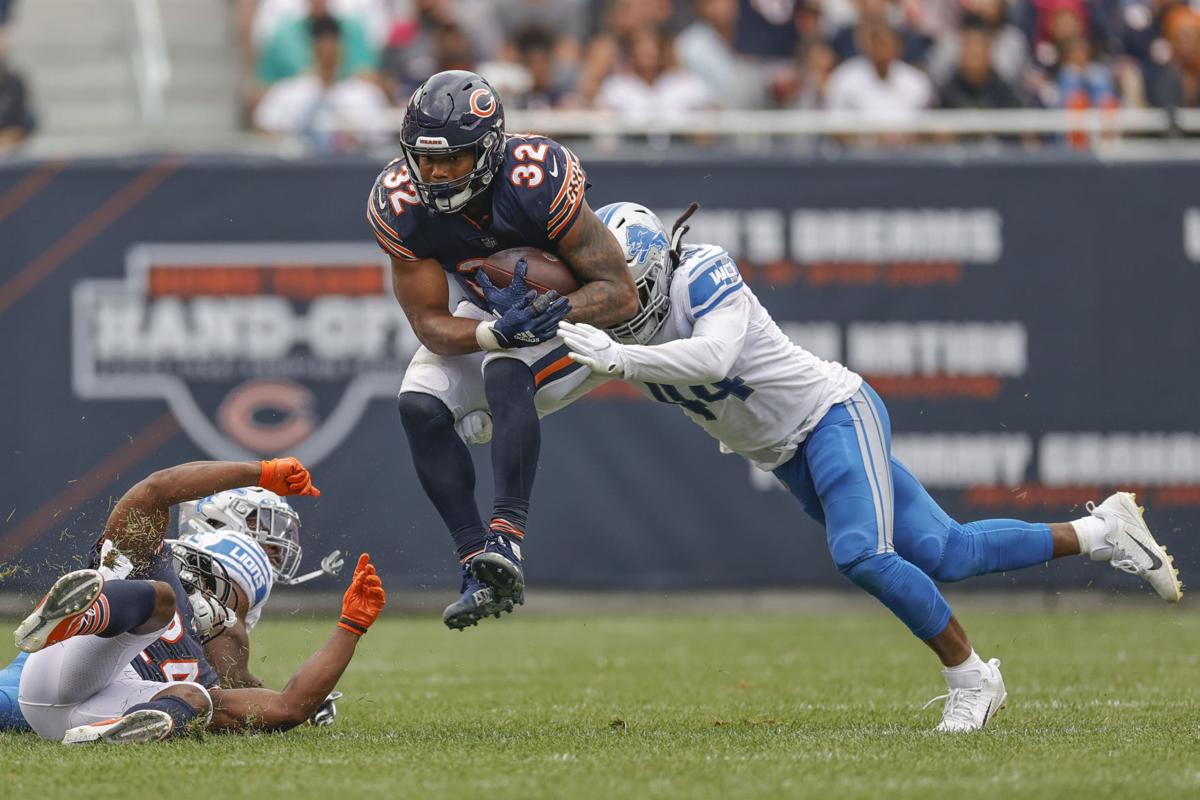 Chicago Bears running back David Montgomery (32) is tackled by Detroit Lions linebacker Jalen Reeves-Maybin (44) during the second half of an NFL football game, Sunday, Oct. 3, 2021, in Chicago. 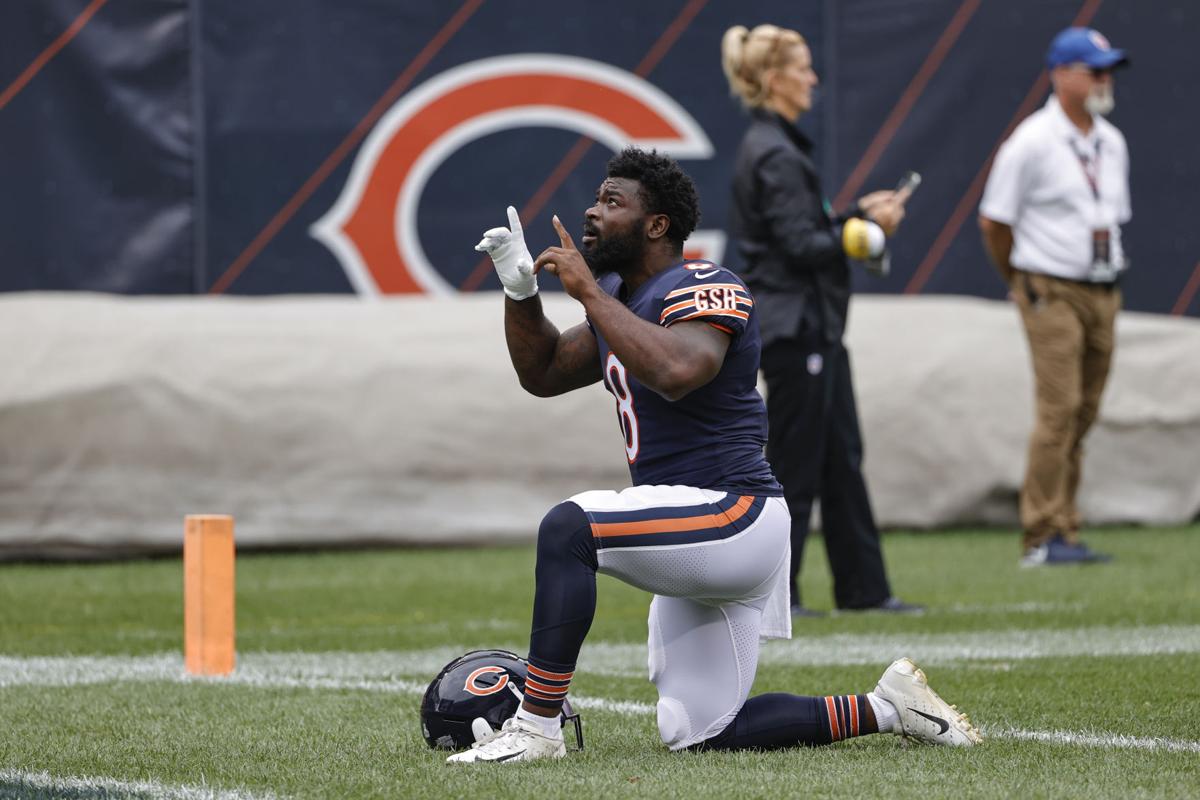 Chicago Bears running back Damien Williams (8) kneels on the field prior to an NFL football game against Detroit Lions, Sunday, Oct. 3, 2021, in Chicago. 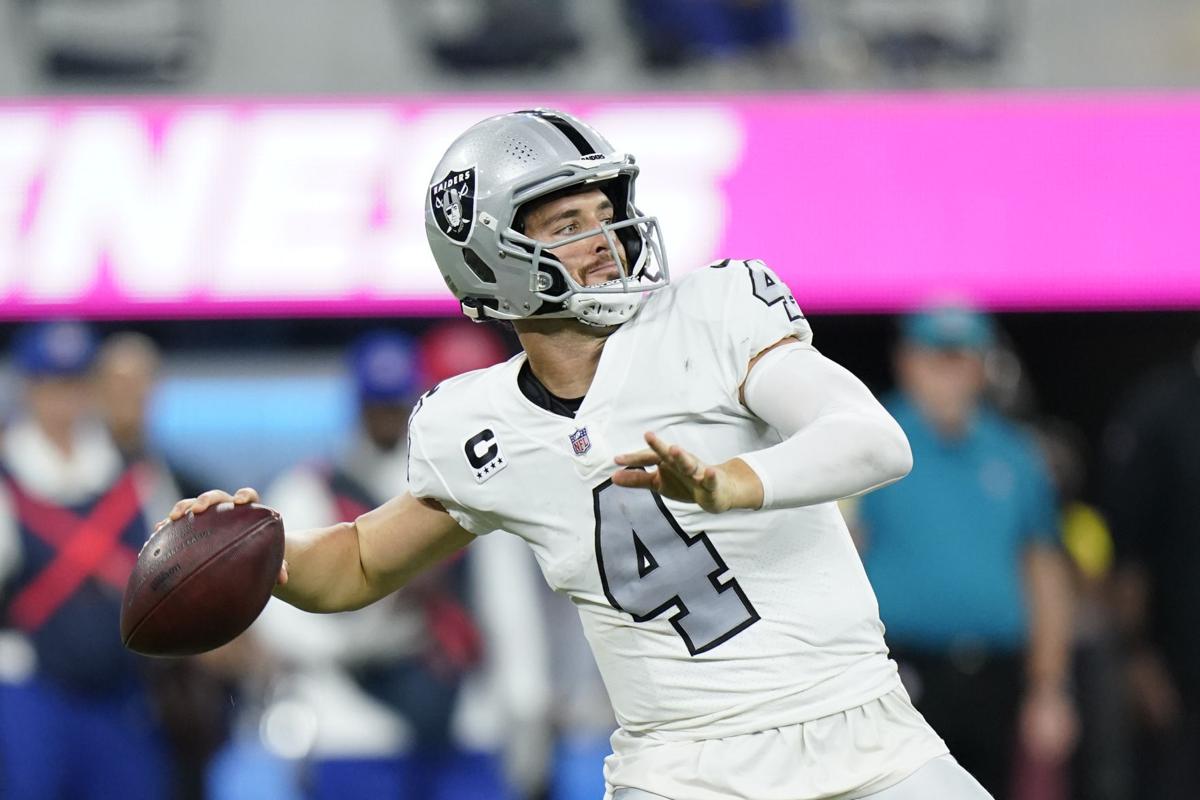 Las Vegas Raiders quarterback Derek Carr throws a pass during the second half of an NFL football game against the Los Angeles Chargers, Monday, Oct. 4, 2021, in Inglewood, Calif. 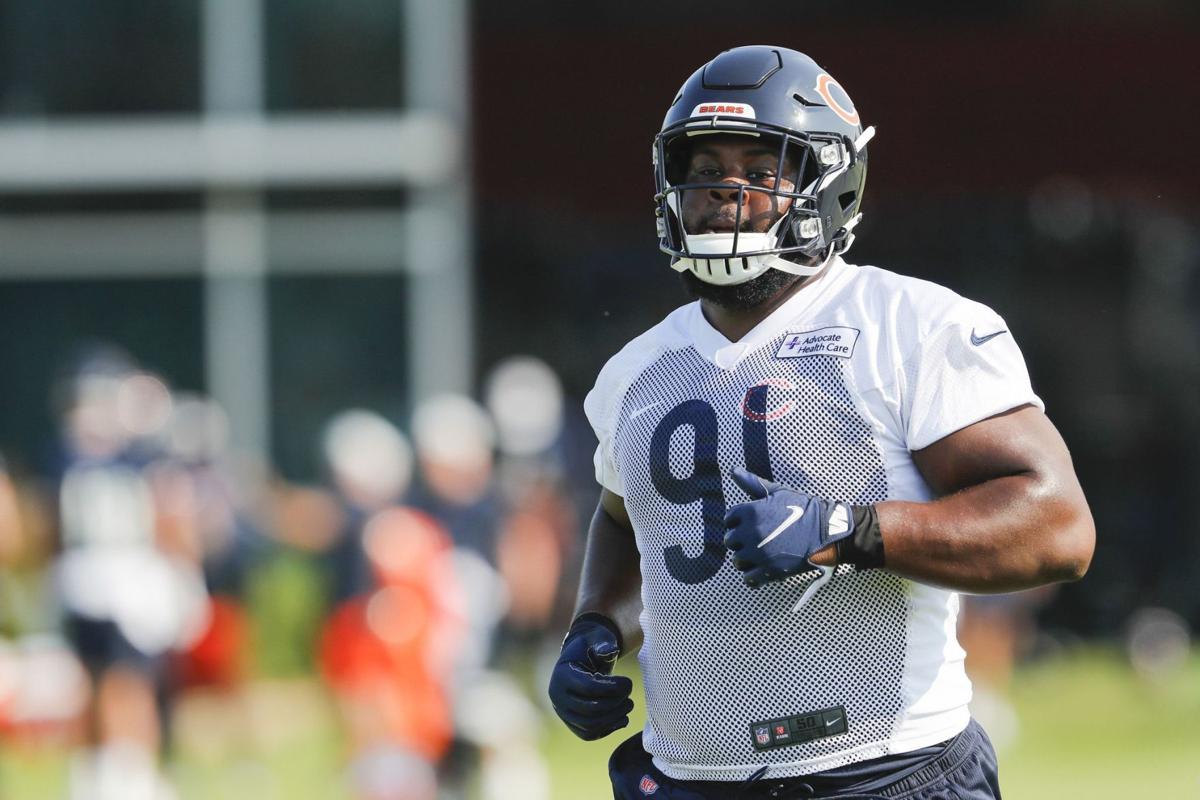 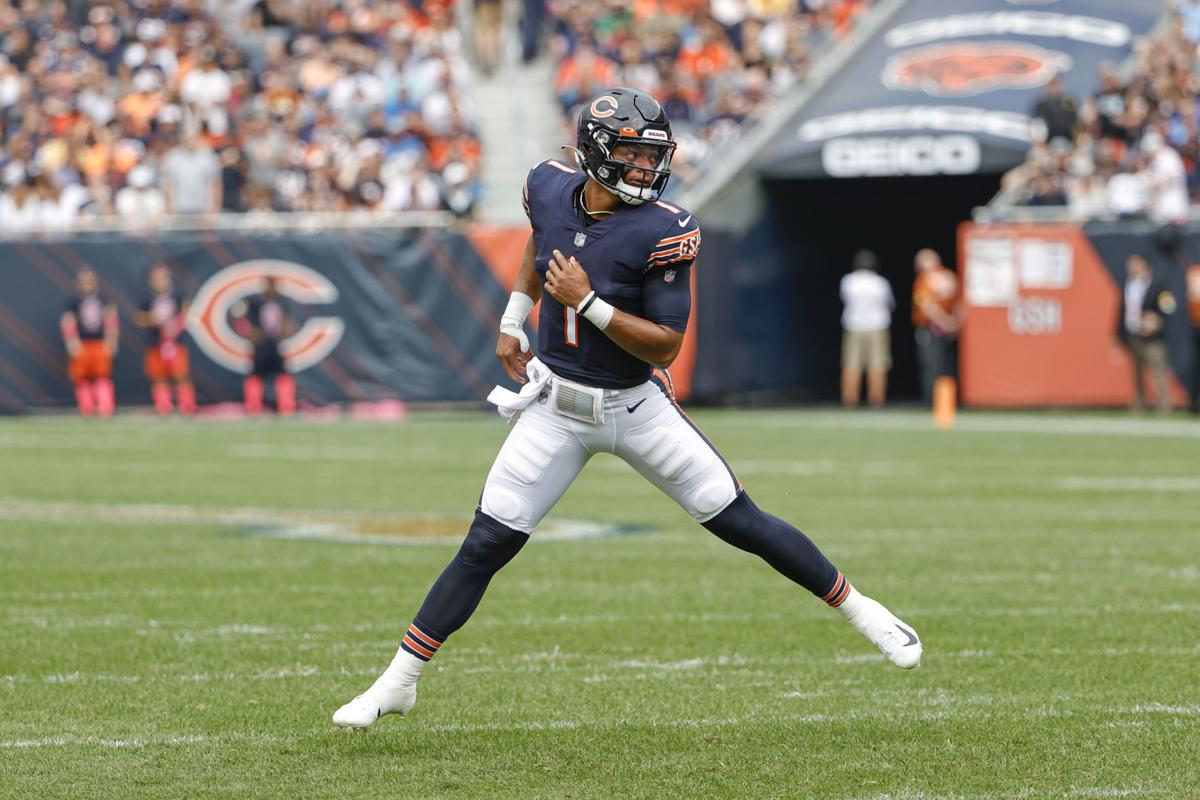 Chicago Bears quarterback Justin Fields (1) looks on during the first half of an NFL football game against the Detroit Lions, Sunday, Oct. 3, 2021, in Chicago. 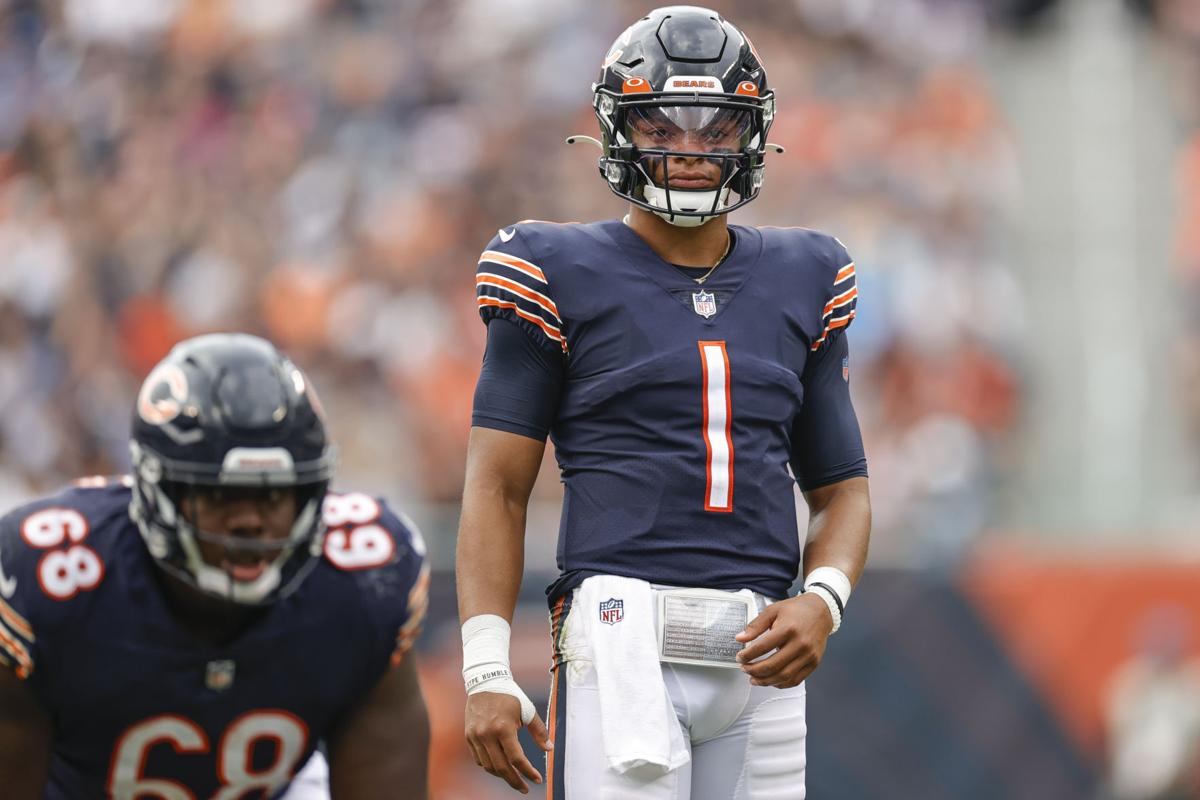 Chicago Bears quarterback Justin Fields (1) looks on during the second half of an NFL football game against the Detroit Lions, Sunday, Oct. 3, 2021, in Chicago. 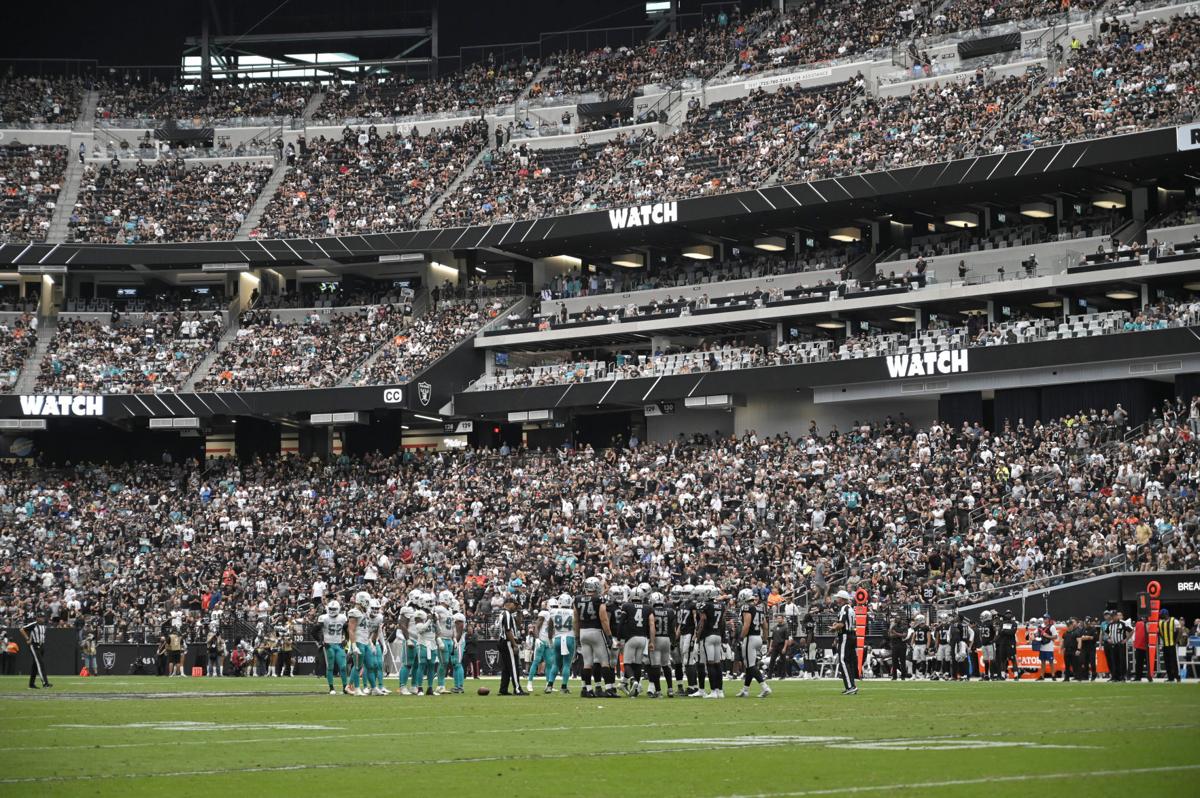 Fans fill Allegiant Stadium during overtime of an NFL football game between the Las Vegas Raiders and the Miami Dolphins, Sunday, Sept. 26, 2021, in Las Vegas.