Goals were a big part of the John Coughlan experience. He set them for each of his cross country and track and field athletes at Illinois State.

Coughlan pushed his athletes to achieve them, and when they did?

Miller graduated in 1997 as the most decorated female athlete at ISU and in the Missouri Valley Conference. She won a league-record 17 individual conference championships and was a three-time All-American.

Some of that likely happens no matter who was coaching her. Clearly, she was a special talent. But does all of that success occur without Coughlan’s wide-ranging influence?

“I definitely would agree with that,” she said.

Coughlan’s death Thursday at age 80 led Miller and many other former Redbird cross country and track athletes to reflect on their Hall of Fame coach. Coughlan led the ISU men’s program for 23 years and the women’s program for eight prior to retiring in 2000.

No other coach in ISU history, regardless of sport, has produced those numbers.

“When I think of a coach generally, I think about their role and that role is a teacher who trains an athlete, right?” Miller said. “I looked at Coach Coughlan and he was much more than that. He was big on the mind, body, soul as well … the importance of positive energy, being in a positive environment.

“He was kind of father-like in that way. I thought a lot about him last weekend with it being Father’s Day.”

Miller credits Coughlan with providing her with a strategy each time she “toed the line,” something she didn’t have in high school, and sternly reminding her in weekly meetings that competing is “80 percent mental!”

“I remember being in his office thinking, ‘Is it really that high?’” Miller said. “He was big on breathing, form and getting those fundamentals down and then starting your progression. Trusting the process and the training.

“He kept you progressing always. There was always the next thing. Having that mentality that it’s never enough, you just keep always improving.”

Not for a minute.

Lester Hampton learned that as soon as he got to campus in 1979. A highly decorated cross country and track coach at University High the past 33 years, Hampton was struggling to find his way as a freshman.

“He was tough. I’m not going to lie,” Hampton said. “I came out of Springfield and ran for someone in high school who was a little bit different (from Coughlan) as far as personalities go. It took me a while to adjust to Coach Coughlan, but once I did, I just understood that he was going to make you tough. He didn’t take it easy on you. He really got after you.”

Hampton benefited from that on the track, winning three straight Missouri Valley Conference 800-meter titles during his time as a Redbird. He calls being one of ISU’s top runners early in Coughlan’s tenure “one of the highlights of my life.”

Yet, what mattered most came away from the track.

“College, for me, was really hard,” Hampton said. “There was a time I didn’t even know if I would finish school. But some of the things he ingrained in me, toughness and not giving up, really helped me … not just from a track standpoint, but as a man and as a student to get through Illinois State. That really helped me have the career that I’ve had.”

Coughlan was proud that so many of his former athletes became successful coaches. The list includes longtime Bloomington High School track and cross country coach John Szabo, who ran for Coughlan during the 1978-79 season after transferring from a community college.

An injury prevented Szabo from running as a senior, but led him to begin coaching at BHS. He found Coughlan to be “very tough … no nonsense” as his coach, but a mentor and an ally when Szabo became a coach.

“To get the head coaching job at Bloomington at a young age, I was pretty fortunate and blessed,” Szabo said. “Right away, Coach (Coughlan) said, ‘Any time you have questions on any events or I can help you staff in any way, let me know.’

“He always reached out to me and was willing to help us. Some coaches in the Intercity don’t want to recruit Intercity athletes. Coach was always willing to talk to our kids and recruit some of them. He told me he was proud of the program we had built. That meant a lot to me coming from him.”

Coughlan relished what Brett Charlton has done at Eureka as well. Charlton’s Hornets placed second in last weekend’s Class 2A state meet, adding to a legacy of state-level success in his tenure.

Charlton was a sprinter under Coughlan in the late 1980s and early ‘90s, a stretch that included three Missouri Valley team titles. Charlton was a small town kid being recruited by small colleges. He sought something bigger, so …

“I happened to be on campus one day and I thought, ‘You know, I’m going to go into his (Coughlan’s) office,’” Charlton said. “He gave me the time to sit down and he was really nice. He gave me an opportunity that no one else was willing to give me.

“He said, ‘Come here, work hard and you’ll have a chance to make our team and do well.’”

Charlton was among 24 freshmen in 1988 and one of only “five or six” to make it through four years. Again, it was tough, but for those who persevered, well worth it.

“Just being a part of that program has made me the person and the coach that I am,” Charlton said. “I can’t thank him enough for that.”

There also is this: when Charlton applied for his first job, he was told, “Your college coach called us and had a lot of great things to say about you.” At Charlton’s second job interview with a different school, same thing.

As competitive and driven as he was, Coughlan had a soft spot for those he coached. He pushed them, drove them, kept moving the “milestones” on them. But he loved them.

Hampton later experienced Coughlan’s softer side playing golf with his former coach at Weibring Golf Club. They would have fun reminiscing.

“If you were trying to take his money, it was a different story,” Hampton said, laughing. “Then the same old competitive Coughlan came out.”

That, too, was part of the Coughlan experience.

We’re better for it.

Fuzzy Zoeller’s wife of 46 years, Diane, was diagnosed with what he called “rapid stage dementia” eight years ago. The diagnosis “kind of took the wind out of my sails,” he said.

Bobbie Monroe calls the memory of June 9, 2001, a "blur" as she saw her daughter get married before coaching Normal Community to the Class AA state softball title.

Kindred: Tim McGuire’s coaching journey reaches its end. Or has it?

Tim McGuire coached his final game last week. He insists it’s true. A devout Christian, he might even swear to it on a stack of Bibles. His wife, Sharon, isn’t so sure.

An athlete’s journey to his/her senior year is often a family pursuit. A decade or more of practices, games, lessons and summer travel tournam…

NCHS entered Tuesday’s regular-season finale — a Big 12 home game vs. Peoria Notre Dame — at 17-6 overall and 11-1 in the conference. No other team in the league had fewer than three Big 12 losses.

Kindred: ‘Dr. J’ was a gift that keeps on giving for Illinois State

Jim Johnson impacted generations of ISU students and student-athletes. Eight years after his death at age 73, he is still making a difference, thanks to his widow, Pat.

Kindred: ‘I have to do this’: Tony Griffin keeps coaching during cancer fight

Griffin, 59, was head girls coach at Heyworth High School for 16 years. He was diagnosed with cancer after taking over as eighth grade girls coach at Tri-Valley.

For nearly all of our 40 years together, my wife Martha and I have hosted a Fourth of July party for family, extended family, friends, acquaintances, cats, dogs and the occasional drifter.

Kindred: Cubs, Cards flags get benched. Is it time to wave a white one?

Amber May knew all along she should not give up softball pitching.

What kind of swimmer was a young Patrick Kinas? Subpar is a good word. Terrified works, too. 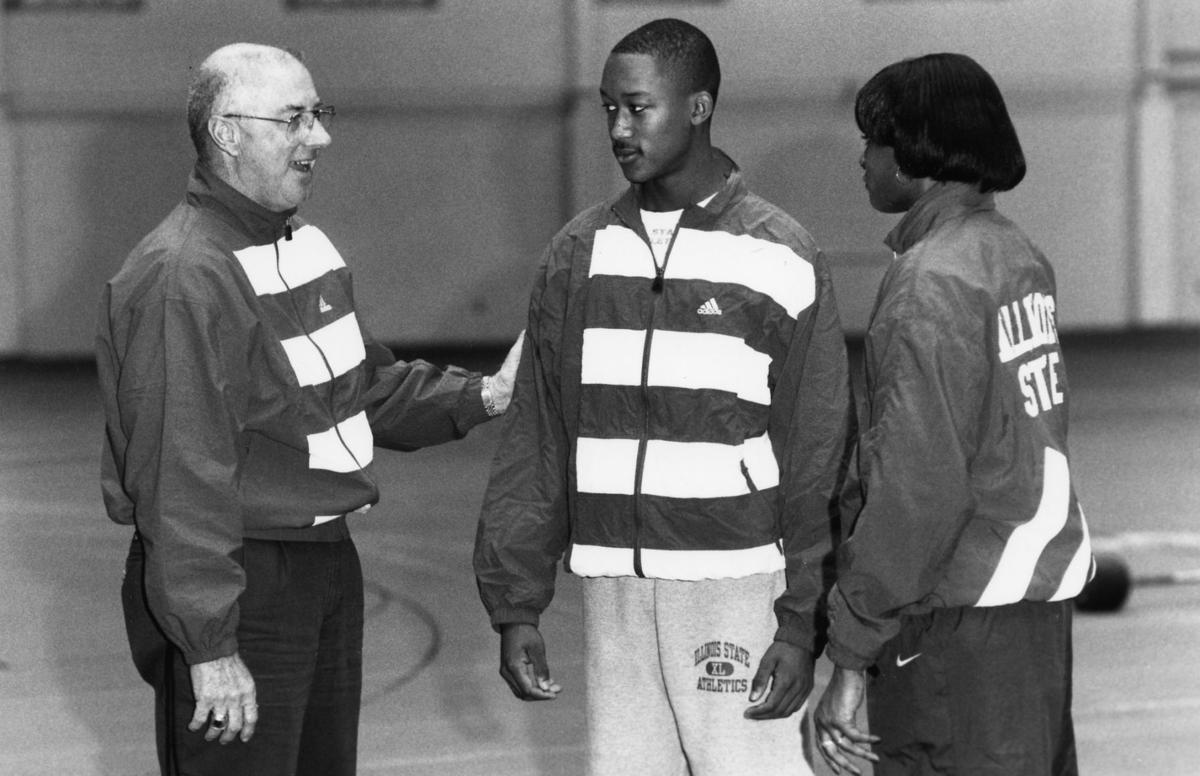 John Coughlan talks with a couple of his student-athletes during his time as Illinois State cross country and track coach. 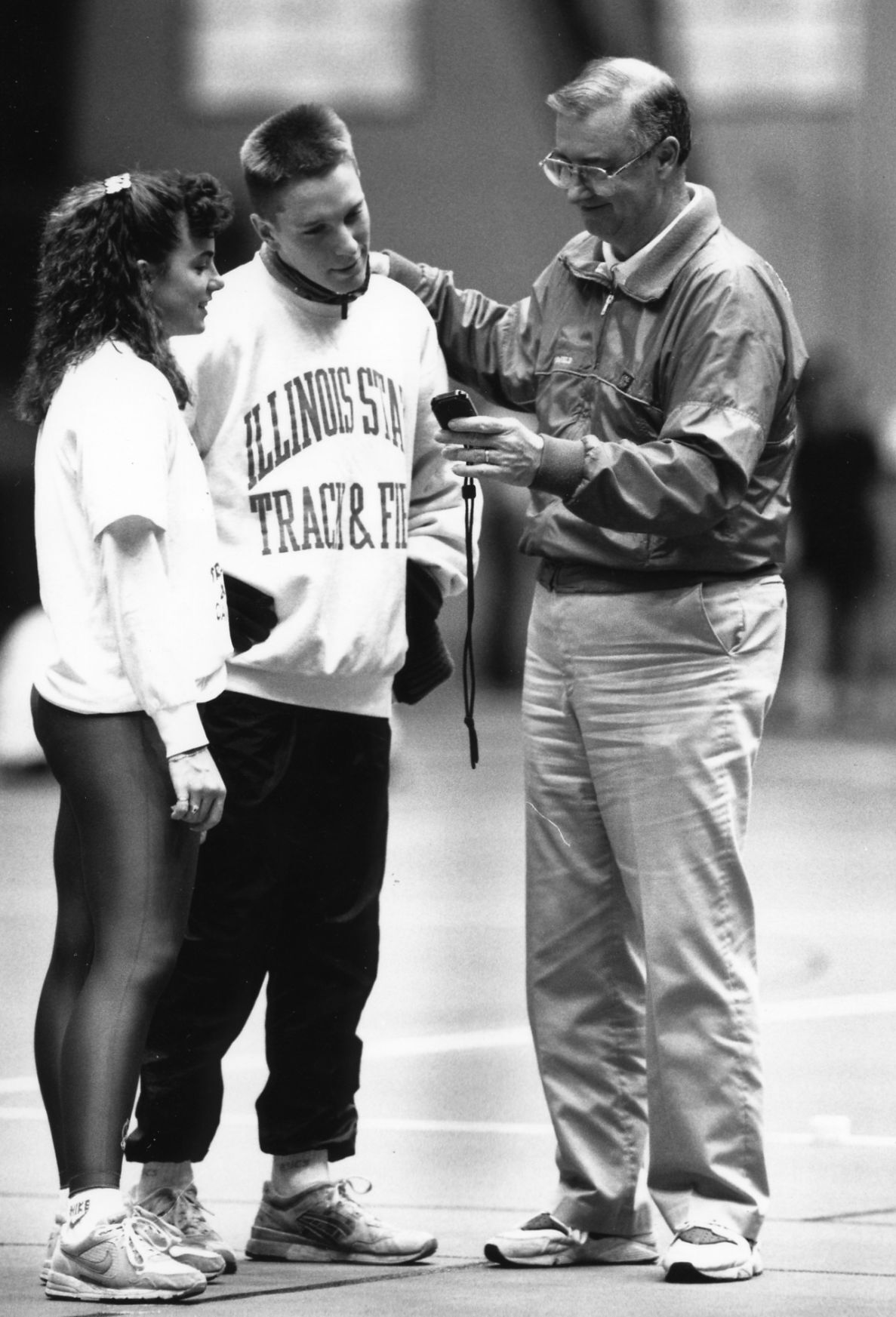 John Coughlan shares a time on a stopwatch with two of his athletes during his highly successful tenure as Illinois State's cross country and track coach. 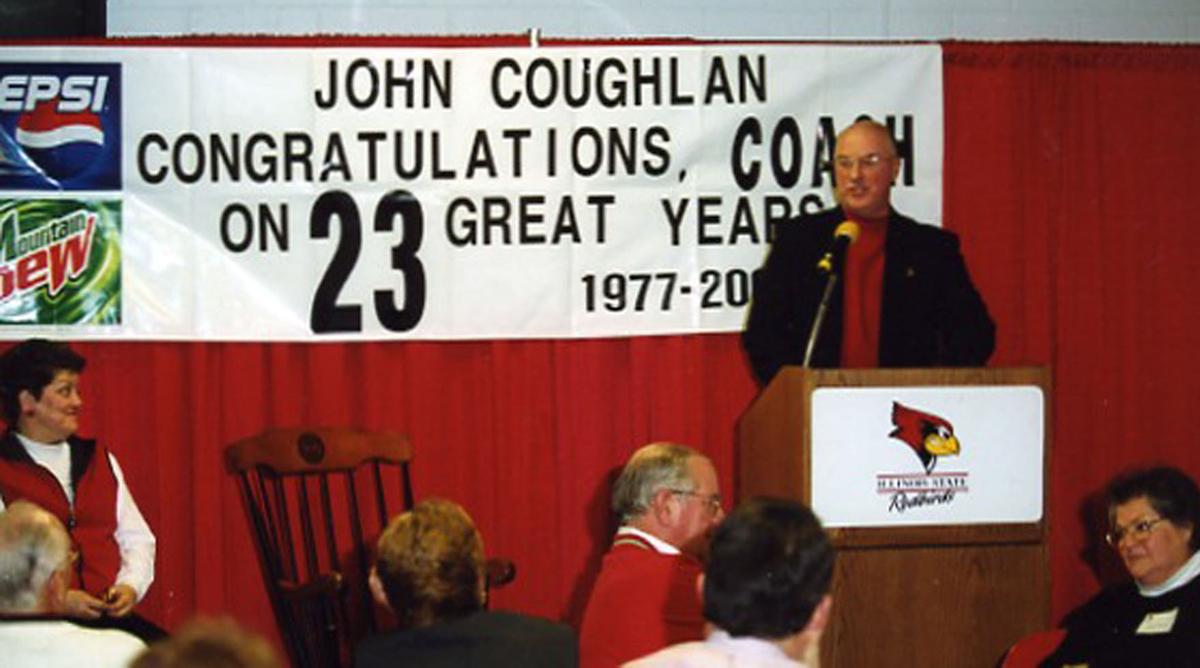 John Coughlan addresses the crowd during a retirement celebration at Illinois State in 2000. Coughlan, who died Thursday at age 80, was a Hall of Fame track and cross country coach at ISU from 1977 to 2000.