VERMILLION, S.D. — Minutes after a road victory over a nationally ranked opponent, the Illinois State football team’s thoughts drifted back to Illinois.

“All week we were talking about how we wanted to win this game for Pam,” cornerback Jarrell Jackson said of football office secretary Pam Merna, who is in hospice care with cancer. “It means a lot to us. She’s been at ISU forever. She means a lot to us.”

Merna has answered the phone in the ISU football office since 1993 and has worked for head coaches Jim Heacock, Todd Berry, Denver Johnson and Brock Spack.

“We’re going to give her the game ball tomorrow (Sunday). I can hardly wait to do that,” said Spack after his team’s 20-14 win over No. 15 South Dakota on Saturday.

“She’s been our secretary for a long time. It’s really been hard on all of us to watch. Our prayers and thoughts go out to her. Pam, we love you. We’ve got a game ball for you.”

ISU linebacker Kenton Wilhoit looked like a receiver when he jumped to snare a third-quarter South Dakota pass and returned the interception 20 yards for a touchdown that put the Redbirds ahead 20-7.

Wilhoit, who brought back an interception 29 yards for a score in March against Northern Iowa, is used to having the football in his hands. He was an all-state running back at Oak Grove (Mo.) High School.

“It came on me quick. I had pretty good reaction time on it. It stuck to my hands and I ran right on in,” Wilhoit said. “I’m thankful for my offense in high school. I caught the ball a lot growing up. I was always playing catch so it’s easy for me to catch a football. I’m grateful for that.”

A linebacker in his playing days at Purdue, Spack was “very impressed” with Wilhoit’s play.

“The ball was coming from about 10 yards away. It was a rifle shot,” said Spack. “That’s a big-time play.”

Redbird tailback Cole Mueller rushed for a career-high 178 yards on 25 carries in the win. He met the media afterward with cotton stuffed in both nostrils to combat a bloody nose.

For his efforts, Mueller was named Missouri Valley Football Conference Offensive Player of the Week and Newcomer of the Week on Sunday.

“A bloody nose doesn’t bother me,” Mueller said. “I’ve wrestled my whole life. I’ve dealt with having double nose plugs for a wrestling tournament. It’s not much different playing football with them.”

Mueller had blood dripping from one nostril early in the game and the other side followed in the fourth quarter.

Spack had said earlier in the week he would like to give a hot back the majority of the carries instead of a more equal distribution the Redbirds have featured for most of the season.

“It’s good to get in a groove. Then you can like read the defense,” said Mueller. “You can feel out who does what and who’s good at what. It kind of helps being able to run better.”

Mueller’s first-half 69-yard touchdown sprint in the first half came on a play that did not work nearly as well last week against North Dakota State.

“He was in too big of a hurry. We talked about that during the week. Let that play simmer a little bit,” said Spack. “Be patient. Take your time. Play fast but don’t be in a hurry.

"He timed it up very well. It was the exact same play we ran against NDSU. It should have been a touchdown, but he got tackled for a 2-yard gain.”

No penalty flags were initially thrown. After a targeting penalty was announced, the play went to review and the infraction was overturned by the replay official.

Camp, who completed 3 of 5 passes for 20 yards before exiting, did not return to the game and came out for the second half with his left arm in a sling.

“The replay official didn’t think it was targeting, but it was definitely a big hit,” South Dakota coach Bob Nielson said. “We’ll see how bad the injury is. I can’t tell you right now.”

Coyotes linebacker Jack Cochrane called it “a nasty play, but it’s part of the game.”

Reid’s hit forced a fumble that was recovered by Redbird Jeremiah Jordan.

The ISU defense held firm in the fourth quarter when the Coyotes had first-and-goal at the Redbird 9-yard line.

Reid broke up a third down pass. On fourth down, Wilhoit and Clayton Isbell stopped scrambling quarterback Cole Stenstrom at the 4 to preserve a six-point lead.

“That’s a tough way to lose when you have an opportunity to put the ball in the end zone at the end of the game and don’t get it done,” said Nielson. “We’ve got to find a way to make plays. That’s a really good defensive team. Nobody has scored a lot of points against them.”

The team flies into the airport in Sioux City, Iowa, crosses the Missouri River to stay in a South Sioux City, Neb., hotel before driving north through North Sioux City, S.D., to the South Dakota campus in Vermillion.

Mueller to the house

Merna more than a secretary to ISU football

NORMAL — Call her an administrative assistant, a secretary or an office manager.

Illinois State takes on South Dakota at the DakotaDome. 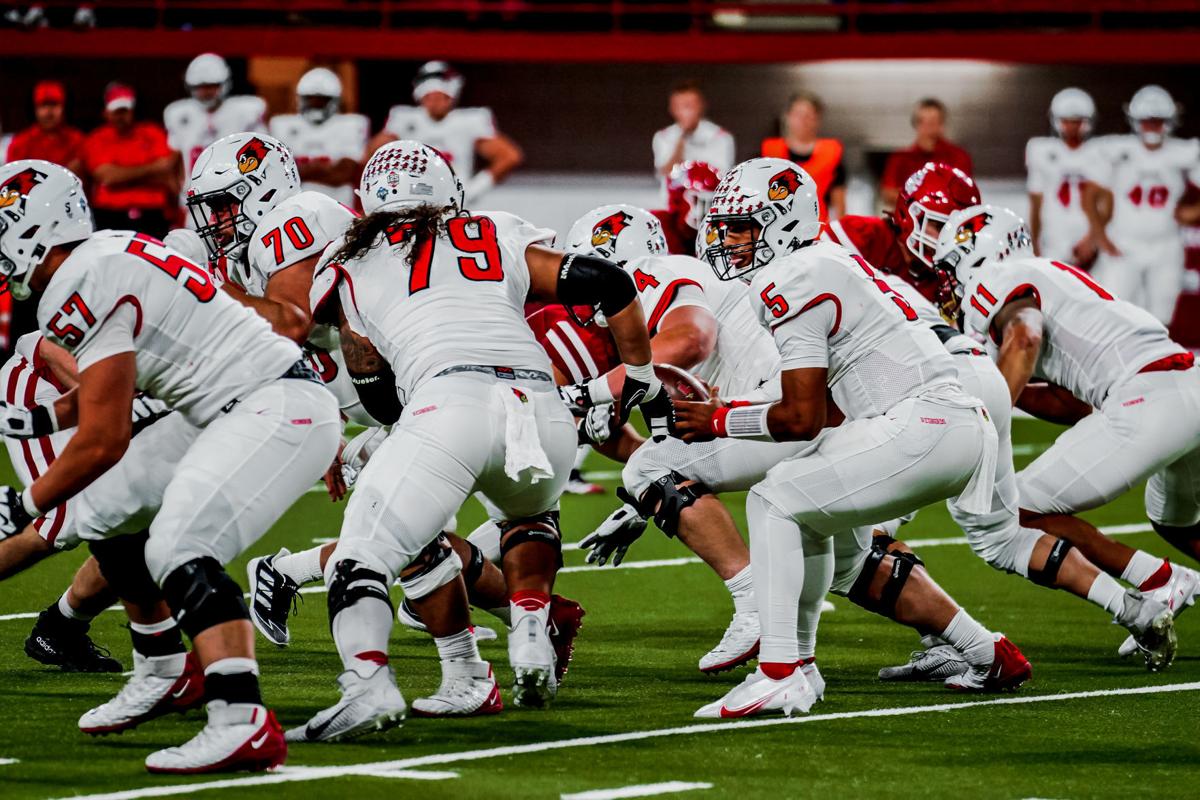 Illinois State guard Trey Georgie (79) comes out of his stance to block as quarterback Bryce Jefferson takes the snap Saturday at the DakotaDome. 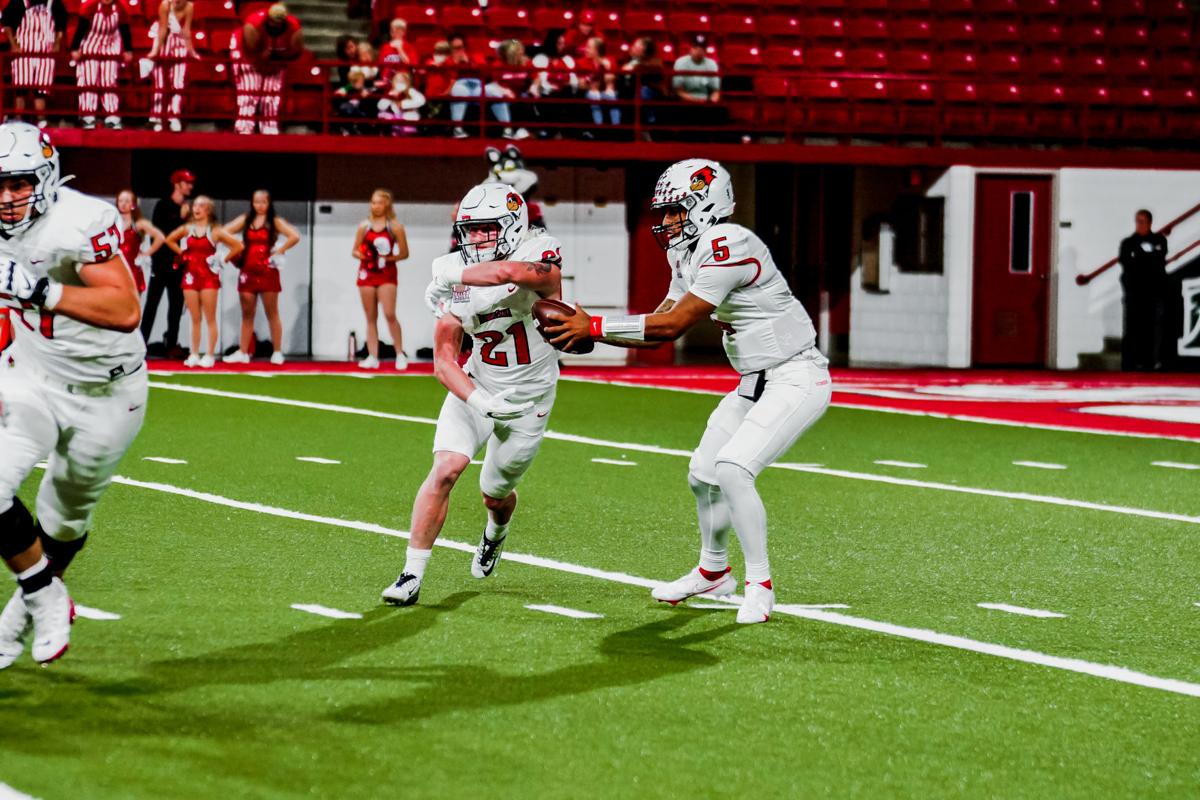 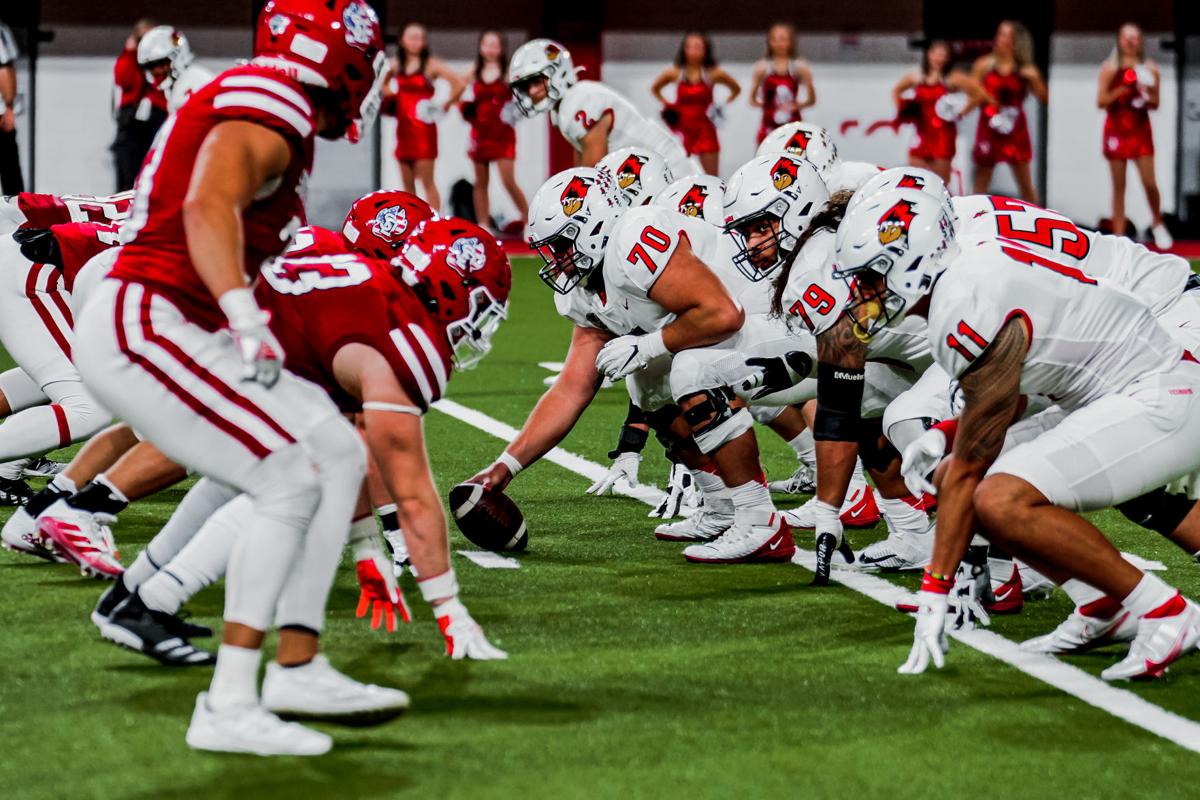 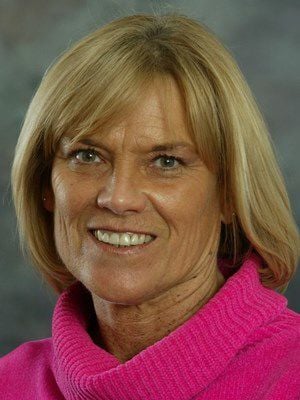