NORMAL — Illinois State head coach Dan Muller expects every Division I college basketball team to go into a full-court press in the next couple weeks.

The NCAA Division I Council announced Wednesday the season can begin Nov. 25, which is two weeks later than originally scheduled. Muller said there will be "a mad scramble" in trying to put together a nonconference schedule because of the COVID-19 pandemic and concerns about travel and safety.

ISU is supposed to play in the Cancun Challenge, which has been moved to Melbourne, Florida, on Nov. 24-25. The Redbirds also were to get two home games in that event, including Nov. 20 against Georgia Southern.

Whether that event and nonconference games already set up with Milwaukee, Ball State, Northern Kentucky and others get played remains to be seen.

"I don't have much an idea what it (the schedule) is going to look like, but it's going to go quick," said Muller. "As soon as they tell us and give some kind of guidance and possibly legislation that allows you to get out of nonconference contracts due to safety reasons, everything is on the table."

Check out some of the 🔥🔥 work done yesterday by @Redbird_Pro
from yesterday's workouts!! pic.twitter.com/hctSQyBOVp

Muller expected an afternoon workout to be the first in which his entire roster would be on the court together. Alex Kotov, a 6-foot-10 transfer from Russia, arrived late in the summer because of travel complications from the pandemic and then had to take a mandatory two-week quarantine.

The Redbirds also had some players forced to sit out workouts because of COVID-19 positive tests and contact tracing protocol. The team also took a week off before the Labor Day holiday because of the ISU athletes' boycott for social justice and changes at the school before getting back together last week.

"We've been off about three weeks (since workouts began in late July)," said Muller. "We had a couple guys off longer than that. Right now I would say our bodies are in shape like it's July, and it's not really the players' fault. When that happens you have conditioning concerns, but more importantly injury concerns."

Beginning Monday, the NCAA also will allow teams to be together eight hours on the court per week instead of four until practice officially begins Oct. 14.

Right now teams can be on the court four hours per week and work with coaches and strength and conditioning staff for eight hours total.

"It would help a lot," said Muller. "We're using three (hours on the court) right now because we're in the weight room about five hours a week. That extra time would help us get our guys in shape in addition to all the other things you do on the court building skill and putting your systems in."

Kotov was slated to participate in his first workout Wednesday. He only played two games last season for Daytona (Fla.) State College before being sidelined by a hand injury.

"He's just out of shape and hasn't played basketball for the last month," said Muller. "Missing time in the weight room and not being here this summer would hurt anyone, and it definitely hurt Alex.

"But it's way too early to give a full evaluation of where he is other than to know we have to get him in shape and acclimated to the pace we go at. In two-to-three weeks we'll have a better feel on what Alex looks like."

By the middle of September, Muller said coaches usually have an idea how their team is coming along.

"With all the stoppages what it really does is delay decision making and evaluation of what you expect from certain guys and what your team is going to look like," said Muller. "It's no one's fault ... its just a different year for everybody."

While there is uncertainty still looming, the NCAA's decision of a Nov. 25 start date felt like an early Christmas present.

"If you would have told me that three months ago I would say I'll sign up for that," said Muller. "The only other wish I would have — and any coach would has this — is maybe we'll get fans (in arenas) sometime in '20-21 if things change medically. Hoping for fans at some point in the conference season I would completely sign up and to get however many nonconference games we can."

Watch now: Illinois State basketball team finds it 'really good to be back in the gym' and getting to know each other

Getting back on the basketball court with his teammates and coaches has been "really fun so far" for Illinois State senior Keith Fisher III.

Illinois State sophomores DJ Horne, Antonio Reeves and Abdou Ndiaye know adding strength in the summer could be the key to more victories during the basketball season.

Kenneth Pierson drove home to Texas in 1999 convinced he would go back to get his Illinois State degree. The former Redbird basketball player did so ... 21 years later.

A little after 10:15 in the morning last week, Illinois men's basketball head coach Brad Underwood stepped out of the Ubben Basketball Complex…

From Michael Hoomanawanui to Frank Butler, here's the complete list of NFL players from the Pantagraph area.

Illinois State's men's basketball team will travel to face Evansville in the Missouri Valley Conference opener on Dec. 30, it was announced Tuesday.

ST. LOUIS — Change is coming to the Missouri Valley Conference.

It will be six straight weeks of practice without an end in sight until Illinois State opens its basketball season in Nebraska on November 25. Yet no one is complaining during this COVID-19 influenced year.

Illinois State didn't get much respect in the MVC preseason poll as the Redbirds were picked ninth, where they finished last season. ISU senior forward Keith Fisher III was selected to the preseason all-league third team. 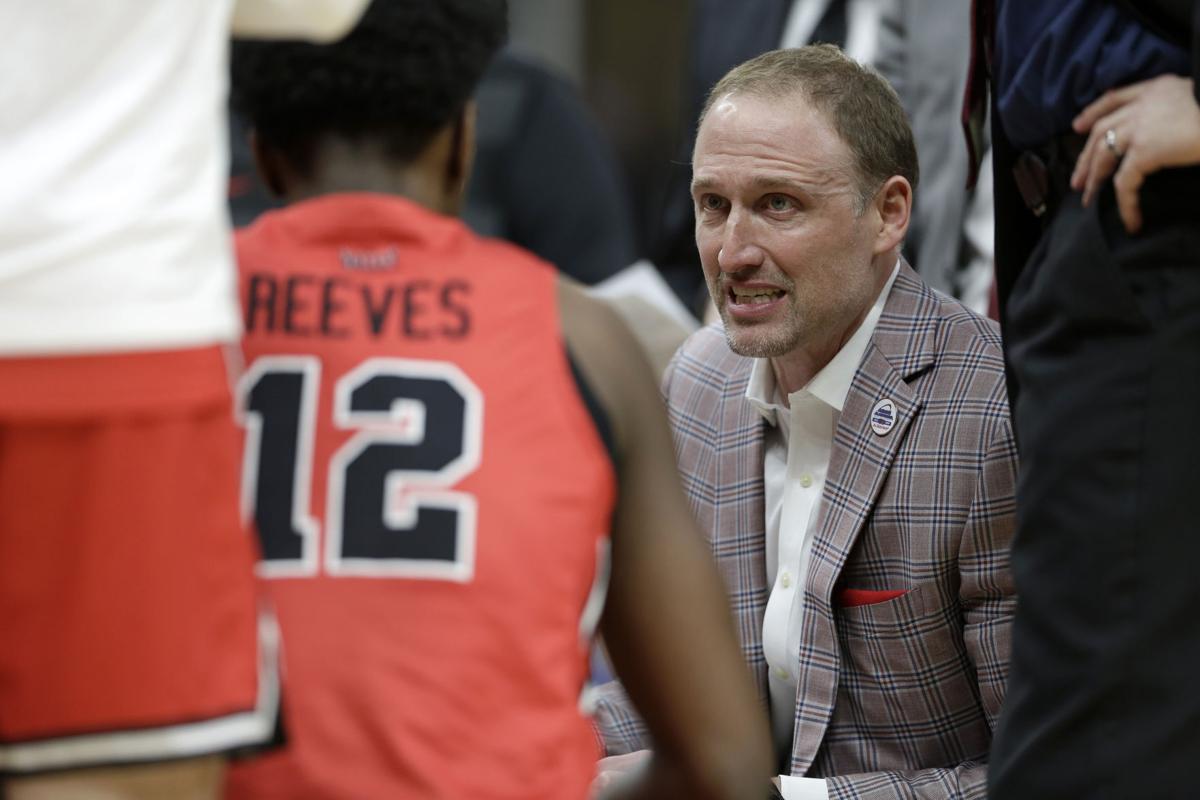 Illinois State head basketball coach Dan Muller believes schools will need to act quickly in the next couple weeks to get a nonconference schedule put together. 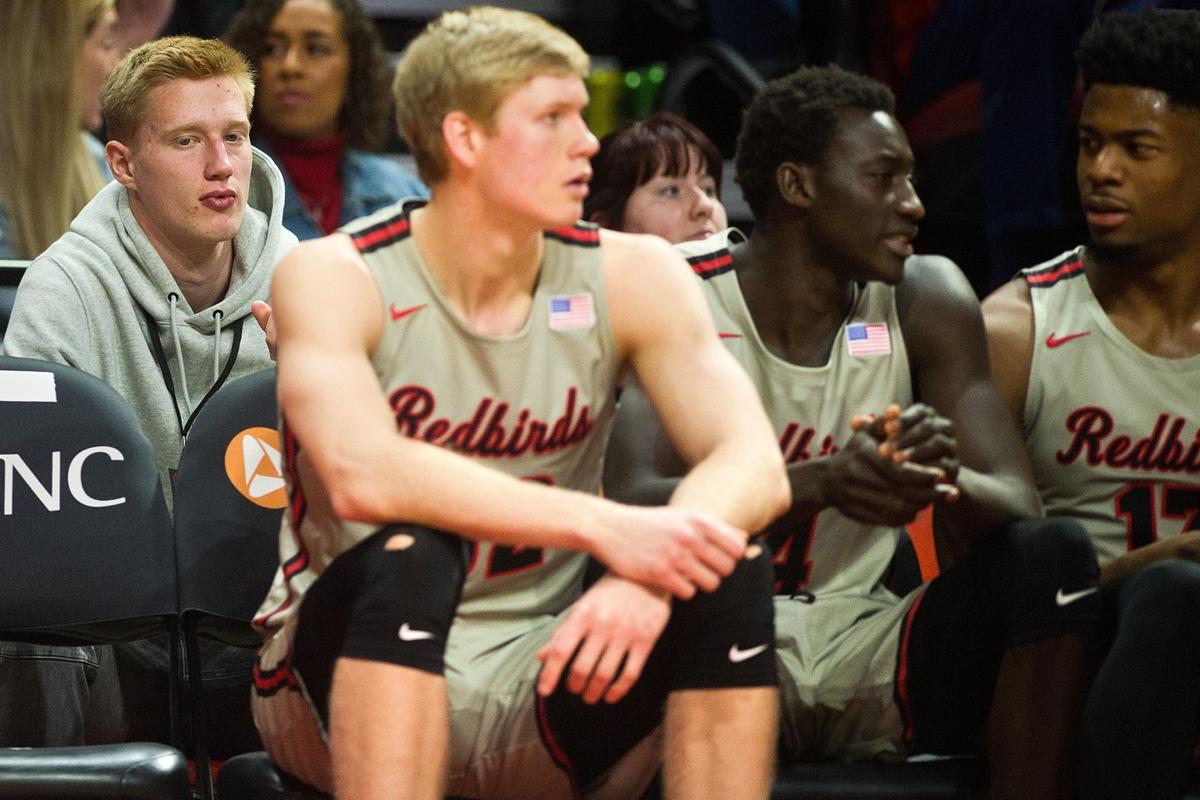 Alex Kotov sits behind the Illinois State bench during a game on Wednesday, Feb. 26, 2020, at Redbird Arena. Kotov was in town on a recruiting visit and has recently committed to ISU.