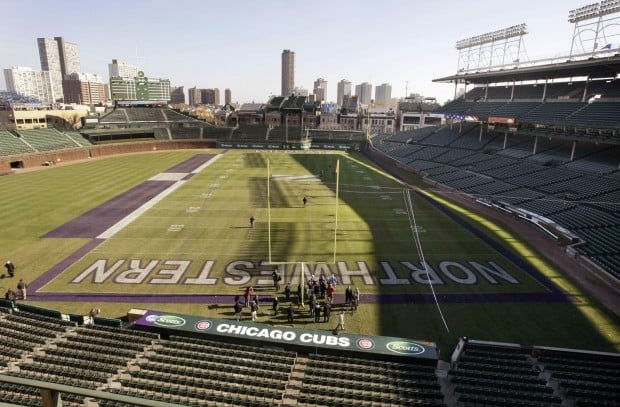 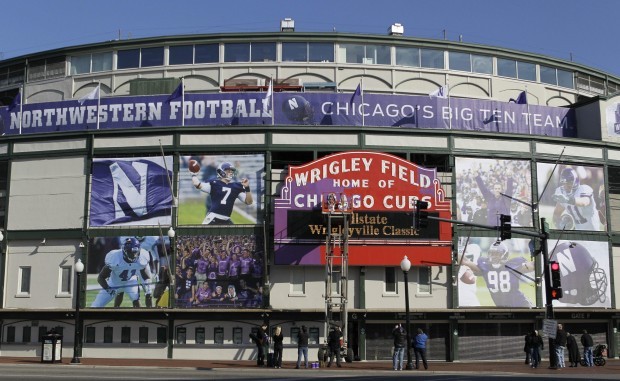 CHICAGO -- Call it a Wrigley Field makeover: The pitcher's mound and home plate are temporarily gone and the infield and warning track are covered in a thick layer of turf. You can't miss the goal posts, either.

The historic home of the Chicago Cubs is being prepped this week for its first football game in 40 years.

A sellout crowd of around 40,000 is expected as Northwestern hosts Big Ten rival Illinois in Saturday's inaugural Allstate Wrigleyville Classic.

"The vision two years ago was to create a bowl game during the season," said Jim Phillips, Northwestern's athletic director. "Our student-athletes, fans --whether they're Northwestern fans or Illinois fans, alums or (from) the great city of Chicago --they're going to experience one of the terrific events in the sporting world in a bowl game-like atmosphere."

In recent years, Wrigley Field has hosted concerts and the National Hockey League staged its Winter Classic in 2009. But football has been missing since the Chicago Bears moved out following the 1970 season.

And it's been an even longer absence for college football. DePaul and St. Louis, two schools that no longer offer the sport, clashed in 1938. Illinois and Northwestern last met at Wrigley Field in 1923, 15 years after the Cubs' last World Series championship.

Northwestern and Cubs officials showed off preparations on Monday, which included a ceremonial repainting of the external marquee in Wildcat purple.

Inside, purple and white Northwestern flags fluttered in a light breeze. The field was already striped in purple and while. One goal post was imbedded in front of the home dugout while the other was mounted on the right field wall.

The setup is more challenging than the conversion for the NHL game, when a rink was built atop turf and infield.

"I think it was a little harder on the pre-setup with the sod and leveling the field," said Roger Baird, Wrigley Field's head groundskeeper since 1995. "After the hockey game we had a lot of work afterward, which will be the same thing here. We'll have to put the mound back in, put the skin area back, the runner's lines, warning tracks and releveling and some resodding."

The Bears played 370 games at Wrigley Field, and during their tenure the field was in a north-south direction from left field to home plate. Additional bleacher seating was constructed in right field to increase capacity.

There's no added seating for Saturday's game and the field has been configured to run east-west, with one end zone just in front of the home dugout and the other abutting the right field wall. Phillips said Illinois fans have snapped up rooftop seats outside Wrigley Field.

The Wildcats (7-3, 3-3 Big Ten) will take a Chicago Transit Authority elevated train from Evanston to Wrigley Field for the game against Illinois (5-5, 3-4).

CHAMPAIGN -- Back In August, most Illinois football fans would have been happy with five wins in the book and two more to play.