Yet there is no sense in trying to remind the former Heartland College second baseman and current Normal CornBelters third baseman that he stands 5-foot-5.

“I just go out there and play like I’m 6-3. I never think about my height,” Figueroa said. “Every time I have a chance to play I’m going to play as hard as I can and keep enjoying things.”

Figuerora enjoyed a stellar day Monday as Normal beat Springfield 10-1 in the first game of a Prospect League doubleheader before dropping the nightcap 11-8.

A Texas Southern recruit, Figueroa was 2-for-3 in each game and totaled four runs scored, three RBIs and three stolen bases. He blasted a home run in the opener and reached base on three other occasions in the twin bill on hit by pitches.

“He was hitting the ball well,” Normal coach Andy Turner said. “Today was maybe the first day he felt comfortable. He’s been new to us. I think he feels like he’s part of the deal right now. He proved himself pretty well today.”

Figueroa was 2-for-18 before Tuesday but broke out on the same field he excelled on for Heartland.

“I’m starting to figure it out now. I’ve been struggling a little bit,” he said. “The big thing I was working on in the cage was staying back and driving the ball the other way. It came into play right here.”

Along with a home run, Figueroa blasted a ground-rule double to dead center field, showing off the muscle responsible for 13 home runs for Heartland.

“Coming back to the Crib was a great day,” said Figueroa, who batted .400 with 57 RBIs for the Hawks’ junior college World Series team. “I’m so happy to be here. It’s a good feeling.”

Figueroa even showed off his baseball IQ in the second game.

On first base with the bases loaded, Figueroa slowed down on a Nolan Sailors chopper to the right side. Shielded Springfield second baseman Jayden Myren could not prevent the bouncer from seeping into right field for a two-run single.

“I was trying to distract him a little bit,” Figueroa said. “I ran up there and stopped and kind of fell over. But it worked out. We got two runs out of it.”

Here are a few other observations from a steamy afternoon at the ballpark.

Another former Heartland player who enjoys the Corn Crib is Jake Armstrong, who hiked his record to 3-0 by allowing one run in six innings in Normal’s first-game victory.

“I love that mound. I love this place,” said the ex-University High hurler. “It’s great to be home pitching in front of my family and friends. This is a special place for me.”

That shows in the numbers. Armstrong has a 3.86 ERA for the summer but that mark is 1.72 in three home appearances.

“Jake has been super. He knows how to mix the strike zone up,” Turner said. “He works the high end and the low end.”

Armstrong allowed just three hits, walked two and struck out nine against the Lucky Horseshoes by mixing up the order in which he delivered his fastball and slider.

“That really kept them off balance,” said the Western Illinois pitcher. “I got it going from the first pitch. The bats showed up like they usually do, and we came out with a big win after the (three-game) losing streak.”

Armstrong sought efficiency with the temperature hovering in the mid 90s.

“It was a hot one. I tried to stay in the dugout in the shade as much as I could,” Armstrong said. “I wanted to get guys back in the dugout as fast as I could, and it turned out pretty well. I try to pitch to contact. The strikeouts will find their way.”

Normal’s Nolan Sailors drove in three runs in each game and smacked a home run in the opener.

Hogan Helligo also homered in the opener, while Wilson Zuck went deep in the second contest. Jackson Chatterton had two hits and scored four runs on the day.

Springfield scored six runs in the sixth inning for the winning margin in the nightcap. Alex Wade highlighted the outburst with a three-run homer. The incoming Auburn recruit homered twice and amassed five RBIs.

Normal scored three in the bottom of the seventh and brought the tying run to the plate.

“I thought we had the tumblers the right way going into the second game to finish that one off, too. It just didn’t work out,” said Turner. “That’s just baseball.”

“It’s fine. You gotta love it first,” said Turner, who is the Heyworth High School coach during the spring season. “Fortunately, that’s a passion of mine so it’s been good.”

Normal is part of the extremely competitive Great River Division of the Prospect League.

Despite being the closest Prospect League team to Normal, Springfield is in the Prairie Land Division and sports a 10-11 record.

Starters Olson and Armstong show the way for Belters.

Watch now: Karson Bonaparte glad to be back on diamond for Normal CornBelters

Bonaparte and former University High teammate Jack Feely will play with Normal in the Prospect League this summer.

U.S. swimmer rescued by coach after fainting at world championships

U.S. swimmer rescued by coach after fainting at world championships 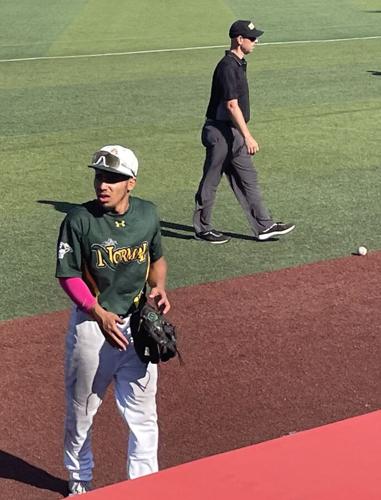 Normal third baseman Jeremy Figueroa retrieves his glove after running the bases in the second game of a doubleheader Tuesday at the Corn Crib. 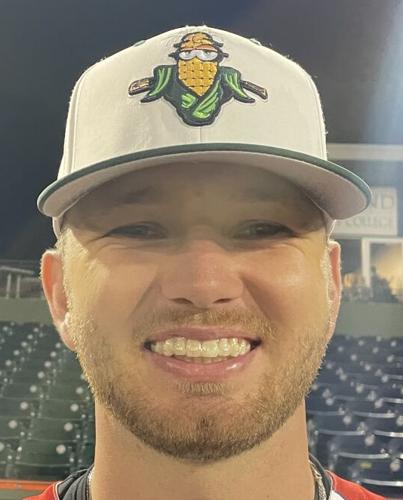 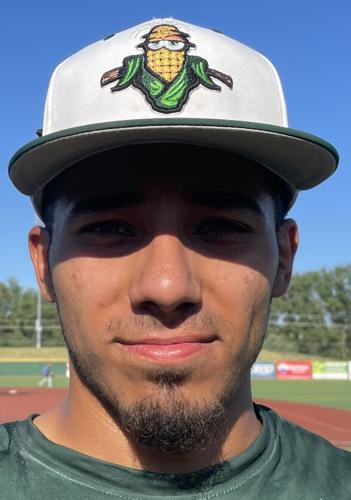