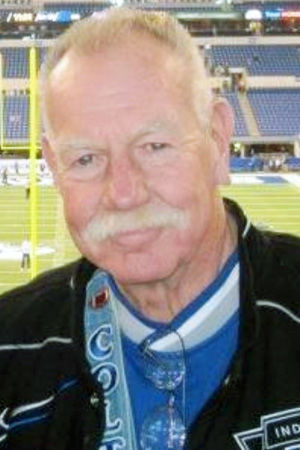 His wishes were to have a simple burial service followed by a celebration of life. Burial will take place on Saturday, October 30 at 1:00 p.m. at the Minonk Township cemetery. Immediately following will be the Celebration of Life, at the Rutland American Legion until 6:00 p.m. Calvert-Johnson & Froelich Memorial Home, Minonk, is assisting the family with arrangements. Memorials can be made to the Minonk Firemen's Association.

Herm was born February 13, 1943, in Streator, IL. The son of William and Anna Mae Kleen Herman, who preceded him in death. He is survived by his "better half", Holly McKenna of Minonk; his three daughters: Trina (Scott) Springer of Belleville, Tricia Herman (Kyle Steinbach) of St. Joseph and Tawn Espinoza of St. Joseph; his seven grandchildren: Derrik (Chrissy) Gaspardo, Zach, Kate and Taylor Springer, Becca, Sydney and Scarlett Steinbach; his four great-grandchildren; sisters: Donna Herman, Linda Azbill, Betty Barth; and many nieces and nephews.

Herm was a graduate of Minonk-Dana-Rutland High School. He served in the Army National Guard. He was the proud owner of Herman's Body Shop in Minonk. He served on the Minonk Fire Department for 45 years, and was the chief of the department for 12 years. He was a cornerstone in the community and actively involved in many organizations. He was a member of the Fraternal Order of Police Association, St. Paul's Church UCC, Minonk, Masonic Temple, American Legion Post 142, supporter of Boys and Girls Club, manager of a Minonk Mens Slowpitch Softball team, and a well-known umpire of the league. He was an avid St. Louis Cardnials and Indianapolis Colts fan.

It was no secret that his greatest accomplishment was his three loving daughters. He enjoyed spending time with family at his home. Herm knew no stranger, and everyone always felt welcomed when around him. He was spot on with the nicknames he gave people. He was a very generous man with a BIG heart. Herm was a practical joker and would make you laugh at the most inappropriate of times. You never walked away from him without a smile on your face or nodding your head in complete wonder. He loved to make his presence known with a BOOM!

Love yah, see you soon (not yet) but soon.