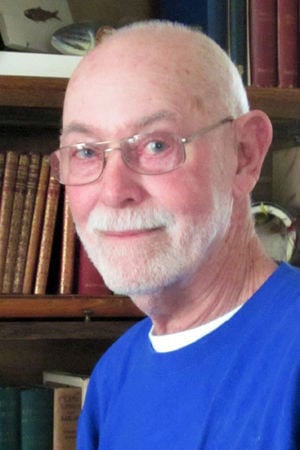 Bill graduated from North Georgia College in 1962 with an English major and a minor in modern foreign languages. While at North Georgia, he participated in the ROTC program; commissioned 2LT USAR on graduation. In 1962 he moved to Chattanooga, TN, with his sister and parents. Subsequently he attended the University of Tennessee, Knoxville, and earned an MA in English in 1963. He enrolled in their PhD program until he was called to active duty at Ft. Benjamin Harrison, IN, in 1966. He transferred to West Point in 1966 with the rank of Captain and taught English there until 1969. After the Army he completed the program at University of Tennessee, Knoxville and graduated with a PhD in English in 1969. He was hired by the Illinois State University English department in 1969 where he taught for 30-years.

As a local resident for more than 50-years, he was active throughout the community. He served on the organizing committee for the establishment of the Old North Normal Historic District, was a member of Illinois Grand Prairie Master Naturalists, co-produced Poetry Radio on WGLT for 23-years, and served on the board of the McLean County Rape Crisis Center to name but a few. He and Ellen were married in 2012 "and there my life began."

He was a tenured Professor of English at I.S.U. and a respected poet. As a scholar he was best known for his work on Thomas Hardy. He published over 30 essays and presented 12 invited lectures on Thomas Hardy and on Feminist themes in literary study and pedagogy at professional meetings and conferences. In addition, he coordinated 20 I.S.U Study Abroad Programs, 1979-1998: "A Summer in Thomas Hardy's England." As a poet he published over 30 individual poems, three chapbooks, and one full-length book of his own poems: The Art of Salvage (Normal, IL: Downstate Legacies, 2016).

An avid music lover and tenor he sang with the Robert Shaw Chorale from 1976-78, then later with the I.S.U. Civic Chorale and gave a solo recital in 1974. He was a great lover of all classical music but especially opera. Saturdays were usually spent listening to broadcasts from the Metropolitan Opera on local public radio.

He was a lifelong fisherman, birder and naturalist, often to be found fishing or hunting on his "borrow pond" in Lexington. He shared that love with his sons by sponsoring 20-years of fishing trips to the Florida Keys to escape the coldest part of the Illinois winter. He was frequently seen happily bicycling on the Constitution Trail or simply out enjoying the beauty of nature. He was known to love a glass of red wine and an ice cream sandwich. He was well-loved and he will be greatly missed.

A Memorial Service will be held Saturday January 29 2:00 PM at the I.S.U. Alumni Center, Normal.

In lieu of flowers please donate to the William Morgan Poetry Award https://giving.illinoisstate.edu/fund/william-morgan-poetry-award/