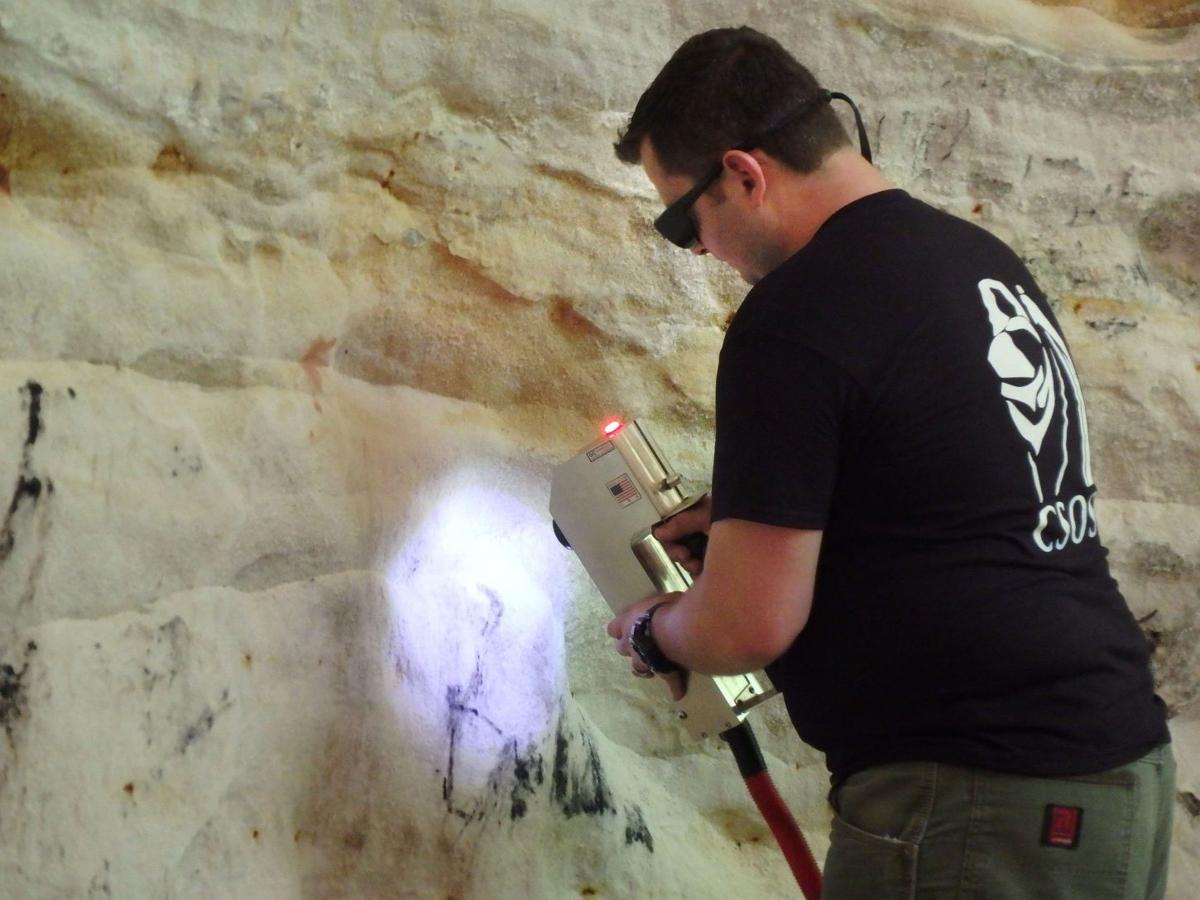 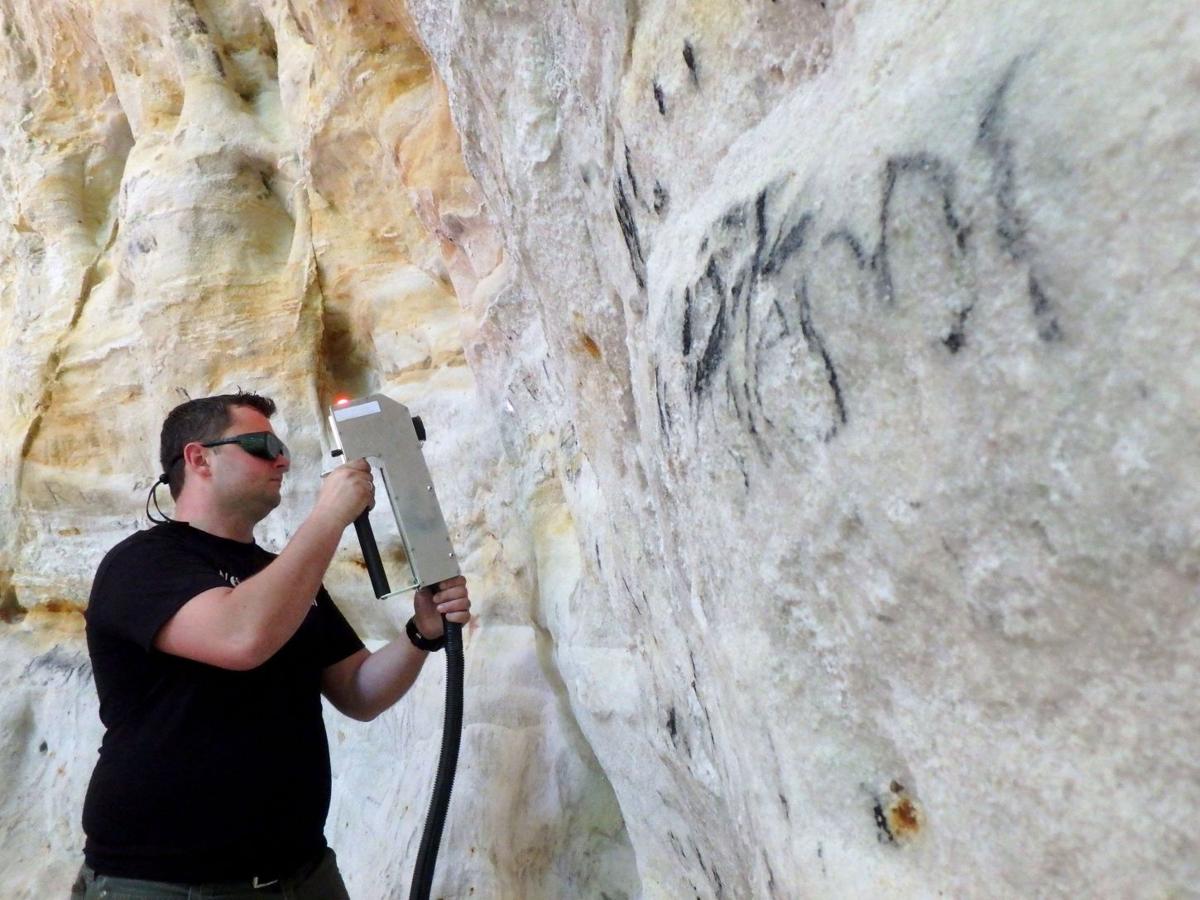 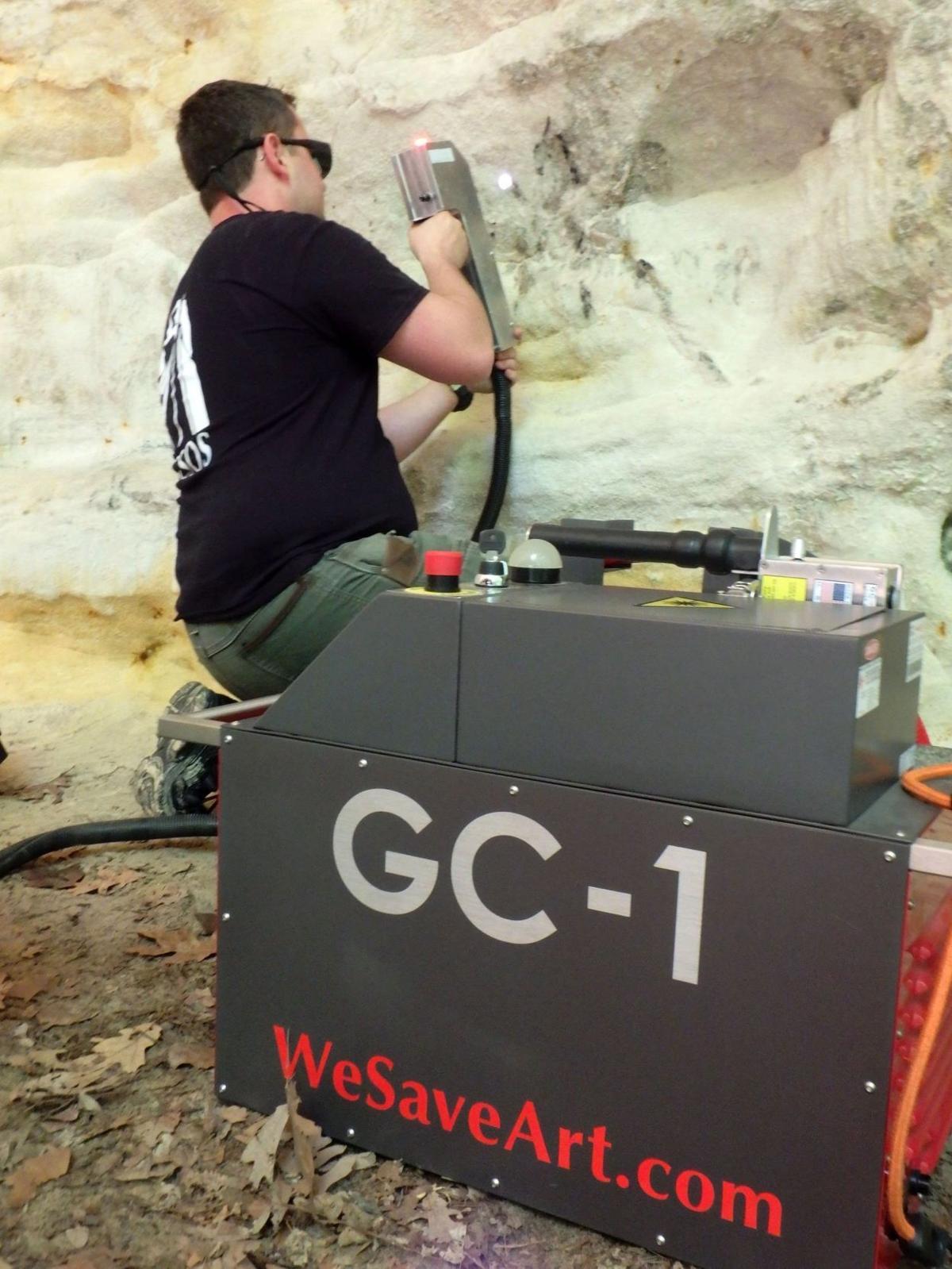 Bartosz Dajnowski uses a special laser system that had to be carried along a hiking trail to the graffiti cleanup site Tuesday at Starved Rock State Park near Utica.

UTICA — Kerry Novak, site superintendent at Starved Rock State Park, was trying to figure out how to clean graffiti off Council Overhang with limited staff and without damaging the delicate sandstone when he was contacted by a suburban art conservation/restoration firm.

But Conservation of Sculpture & Objects Studio in Forest Park was willing to do the work for free. The job involved lugging in a high-tech laser along a hiking trail to delicately vaporize the graffiti.

Specifically, her son, Bartosz Dajnowski, vice director of the company, likes Starved Rock, a place he has visited many times.

“My first photography class I took, this was my favorite place to take pictures — the rocks, the waterfalls,” said Bartosz Dajnowski.

Those rocks were defaced by vandals during or just prior to Memorial Day weekend.

“This kind of thing (the graffiti) has been going on for years and years,” said Novak, but this time, the amount of graffiti — mostly names — was extensive, covering an area about 60 feet long.

Council Overhang is an amphitheater-like area eroded away under a massive cliff leading to Ottawa Canyon. It is on the far east side of the park, away from the main trails, and there is not enough staff to check the area as often as they would like, said Novak.

He called the company's offer to clean the graffiti for free “quite an incredible gift.”

“One of the benefits of getting it (the graffiti) out of there,” Novak said, “is, if we have a clean wall, then maybe people will not be quite as likely to damage it.”

Bartosz Dajnowski said, “It just boggles my mind that people would do this. It's fortunate we have technology that can reverse it.”

He was at the park Tuesday using a special laser he developed to remove the writing.

“We're able to clean the stone in an environmentally friendly way without chemicals and without damaging the stone,” he said. “With this system we can control how far we clean.”

The system is calibrated so it does not harm the stone, but, Bartosz Dajnowski explained, “as soon as I move over the area with the graffiti, it vaporizes it.”

The laser worked like a high-tech eraser but, Bartosz Dajnowski noted, “It is a slow process.”

He used two laser machines, the larger of which weighed about 70 pounds. They had to be carried about a quarter of a mile along a uneven hiking trail and uphill to the site of the damage.

A generator also had to be brought in.

Bartosz Dajnowski has a master's degree in art conservation science and has worked with lasers in the family business for 13 years. He also spent time at a laser research lab in Poland.

Next week, the company will be cleaning the facade on the U.S. Supreme Court Building.

Crowding at Starved Rock may lead to policy changes

UTICA — Litter and vandalism are not the only problems facing Starved Rock State Park. Crowding also is becoming an issue and might result in …

Bartosz Dajnowski uses a special laser system that had to be carried along a hiking trail to the graffiti cleanup site Tuesday at Starved Rock State Park near Utica.