SPRINGFIELD — Ten months after Illinois lawmakers passed the Climate and Equitable Jobs Act which set a goal of putting 1 million electric vehicles on state roads by the end of the decade, state agencies are engaged in a flurry of regulatory planning aimed at meeting those goals.

The effort to electrify the state’s transportation sector and ensure the power grid can meet increased demand involves the Illinois Commerce Commission, Illinois Environmental Protection Agency, the state’s Department of Transportation, and Illinois’ two largest public utilities, among others.

Between those agencies and utilities, there’s hundreds of millions of federal, state and ratepayer dollars available for EV charging infrastructure, vehicle rebates and other plans aimed at accelerating EV adoption.

While the regulatory force behind the legislation lies with several agencies, the task of ensuring all of them are working together lies in the hands of the state’s electric vehicles coordinator.

That person is Megha Lakhchaura, who was appointed to the position officially on July 1 at a salary of $180,000 after serving in an administrative capacity at IEPA since April.

She has previously served as the director of policy in North America for the electric vehicle supply company EVBox, policy director for the rooftop solar and battery storage provider Sunrun Inc., and public utilities regulatory analyst for the California Public Utilities Commission.

It’s a diverse private sector and regulatory experience which she said has helped her hit the ground running.

“So the job is basically figuring out how all of these pots of money work together,” Lakhchaura said in a recent interview with Capitol News Illinois. “What are the pieces that we have to look at? Where do we put our resources? How do we think of things comprehensively and having a comprehensive charging strategy for the state?”

She praised the top-down vision laid out by the governor’s office and the legislation but said lawmakers and regulators will have to continue to adapt to meet the 1 million EV goal.

“CEJA is a good starting step,” she said. “I think that it sets up some very good practices. … It puts out a road for utilities, it puts out a rebate for vehicles, for charging. It's a good first step, but we're going to have to do more to get to 1 million vehicles.”

‘A lot of demand’

It's a time of rapid growth for EV adoption, Lakhchaura said, with nearly 9,000 EVs added to state roads in the first seven months of this year, bringing the total number licensed in Illinois to 46,645 as of July 15.

Still, there are challenges.

“There is a lot of demand, there's no doubt about it,” she said. “I think the problem right now is price, and buying an EV at this point in time, it's very difficult. They're sold out, there’s not enough that are being produced to meet these kinds of demands.”

As of July 1, the Electric Vehicle Rebate Fund had a balance of about $17.9 million, with funds to be distributed once the portal closes.

While many EVs remain expensive, Lakhchaura mentioned a cheaper model, the Chevy Bolt, which retails for just under $26,000 for a base model on the company’s website. If a purchaser receives a state rebate on top of a $7,500 federal tax credit available for certain EV models, she said, the price point becomes more reasonable.

But there are still other challenges, such as a global shortage of lithium and other materials needed for EV batteries, she added.

It’s something being addressed on the national stage with a $3.1 billion investment from the federal bipartisan infrastructure law to improve domestic commercial facilities that produce EV batteries and their parts. As well, President Joe Biden invoked the Defense Production Act earlier this year, an effort to increase U.S. independence in mining for EV-related minerals.

“Yes, in the short-term, the next two, three years or so, demand is causing a shortage,” Lakhchaura said. “But on the other hand, we are also gearing up and trying to solve this problem, not only nationally but globally.”

Negotiations in Congress were still ongoing Friday for an inflation reduction plan which included $369 billion in spending to combat climate change, including electrification measures and renewable energy investment.

On the state side, Lakhchaura said the Climate and Equitable Jobs Act was meant to be forward-thinking, ensuring that the grid and state policies adapt along with the rapidly evolving technology.

A key piece in that effort is a requirement that the state’s two largest public utilities adopt beneficial electrification plans for ratepayer-funded investment in incentives, education and infrastructure to support electrification.

Among other things, the plans must focus on incentivizing EV charging during off-peak hours to limit the effect on the grid, and electrifying heavy vehicle fleets, public transportation and school buses.

The legislation also requires charging infrastructure investment, with 40 percent of the plans’ spending in that area to be done in equity investment eligible communities, where pollution has historically been higher and economic opportunities fewer.

Funding for the plans can’t exceed a 1 percent charge on the distribution portion of a ratepayer bill, and the Illinois Commerce Commission can approve, deny or require changes to the plans.

For Commonwealth Edison, serving 4 million customers in northern Illinois, the proposed plan includes $300 million in programs from 2023 through 2025.

Ameren Illinois’ plan is less extensive, including $2.2 million in current- and previous-year spending, and about $9.6 million in 2023 and 2024. It consists of some new programs and changes to existing programs to allow greater participation for multi-family homes.

The plan included, among other things:

The Ameren plan also mentioned its participation in the rollout of a national pilot program aimed at providing ride sharing opportunities and low-cost EV rentals for inhabitants of multi-family homes.

The ICC this month initiated a review of those ratepayer-funded plans, an expected step in the agency’s regulatory role to ensure the plans are meeting statutory goals on a cost-effective basis.

Outside organizations, such as the National Resource Defense Council, the Environmental Law and Policy Center and others, will have the opportunity to suggest changes to the plans before the ICC approves them sometime next year.

The utilities must then file an updated plan by July 1, 2024, and every three years thereafter.

Along with overseeing the electrification plans, the ICC also last month issued the first draft of its Renewable Energy Access Plan, a long-term view as to what level of stress electrification might add to the grid and how to alleviate it.

One major challenge the plan seeks to address is the fact that widespread electrification of vehicle fleets, household appliances and more could require between 64 and 450 added terawatt-hours of electricity production in the state — a massive increase considering CEJA also aims to take fossil fuels offline by 2045.

A follow-up draft is due out later this year and will seek to fine-tune the load forecasting projections and determine how to best prepare for increased demand.

The state will also have a role in determining how $148 million in federal funding for charging infrastructure will be allocated. The Illinois Department of Transportation began that process with a public meeting for stakeholder input on July 28.

The money is meant to create charging “corridors” to ensure chargers are spaced at least every 50 miles on key transportation routes throughout the U.S.

The median range for an electric vehicle currently is 250 miles, enough to get from Chicago to Springfield with 50 miles to spare.

When it comes to rolling out chargers, Lakhchaura said priorities include building out corridors and ensuring charging infrastructure is available in areas where at-home charging is not feasible.

The state will look to increase charging accessibility in areas with many multi-family homes, as well as on corridors, to reduce range anxiety, Lakhchaura said.

IEPA will also oversee a charging grant program funded with $70 million from the state’s Rebuild Illinois capital infrastructure plan to launch at an unspecified date.

The Department of Commerce and Economic Opportunity, meanwhile, is overseeing the Reimagining Electric Vehicles Act, which aims to incentivize companies that manufacture EVs and their parts to relocate to Illinois.

To date, no contracts have been signed since the measure passed eight months ago, although outreach continues.

The Illinois Department of Commerce and Economic Opportunity confirmed that, to this date, no agreements have been executed under the parameters of the "REV Act."

"It was far from guaranteed that there would ever be a new employer to play the role that Mitsubishi had," Buttigieg said. "But the Rivian story and the Bloomington-Normal story is one that a lot of communities would envy."

There is a thirst for economic development in Central Illinois, and Bloomington-Normal is leading the way as a beacon for electric vehicle manufacturing.

Here's what you might have missed this week in Illinois government news.

The housing authority said it maintains more than 16,000 units of public housing and a portion of the units are vacant for a number of reasons at any given time.

Chicago police and transit officials on Saturday pledged additional security for the city's trains to stem a spike in violent crime after the shooting death of a passenger overnight. 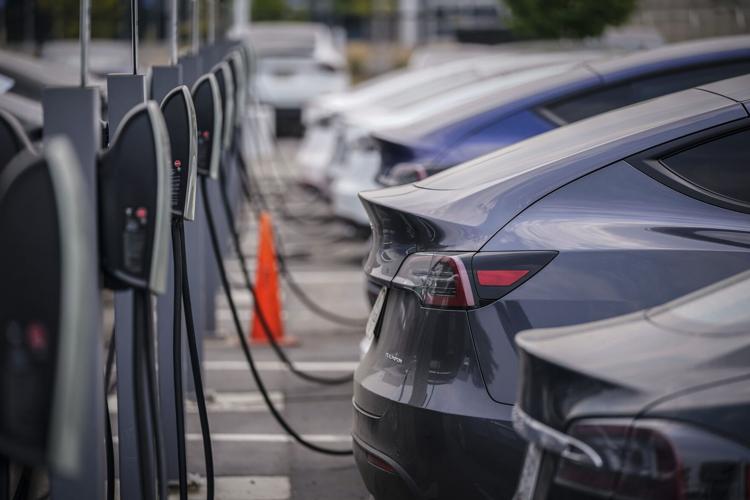 A group of Tesla cars line up at charging stations at a dealership in Littleton, Colo., Aug. 23, 2020. 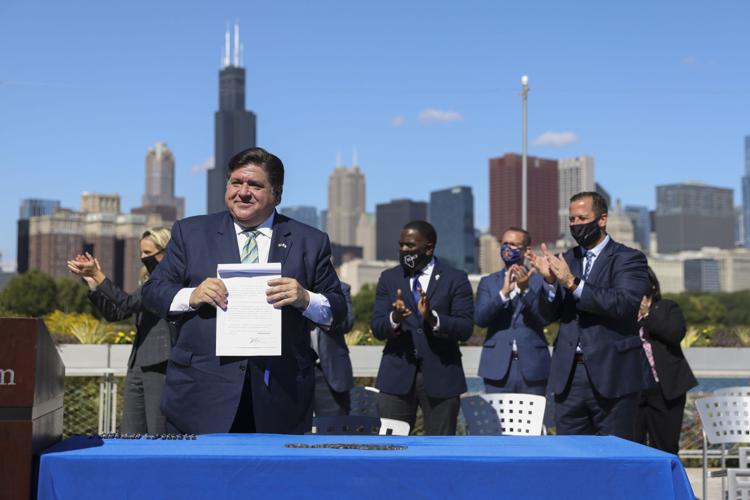 Gov. J.B. Pritzker holds up the state's Climate and Equitable Jobs Act after signing it at Shedd Aquarium in Chicago on Sept. 15, 2021. 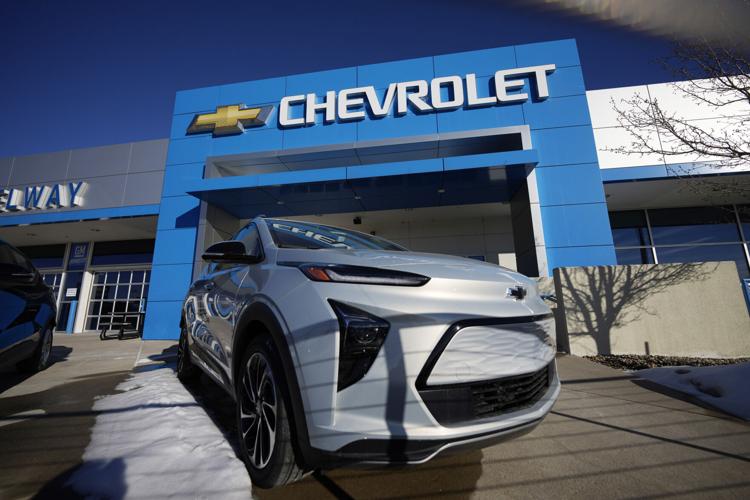 A 2022 Bolt electric vehicle sits in a lot at a Chevrolet dealership on Feb. 27 in Englewood, Colo. 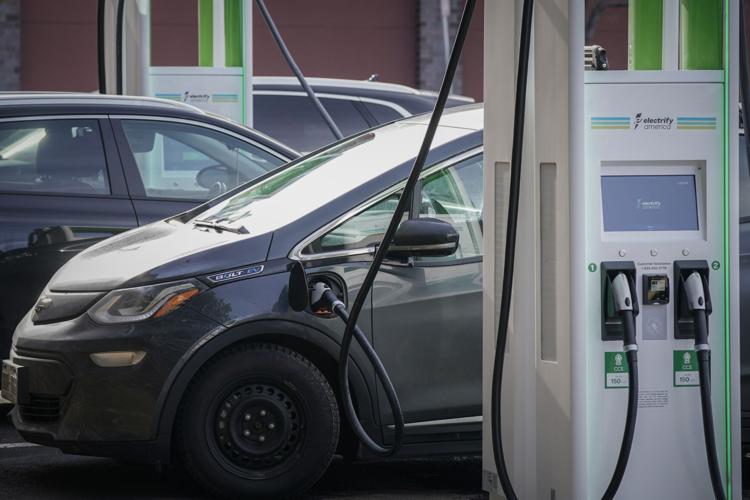 An electric Chevrolet Bolt charges at an Electrify America site in Lakewood, Colo., on Dec. 21, 2020.