SPRINGFIELD — Illinois Democrats gathered in Springfield Wednesday to celebrate the first Governor's Day at the Illinois State Fair in the post-Michael Madigan era, seeking to project unity ahead of the 2022 election cycle.

It was a tall task as the party's just a few months removed from a fight over control between now-Chair Robin Kelly, who was backed by U.S. Sen. Dick Durbin, and runner-up Chicago Ald. Michelle Harris, who was backed by Gov. J.B. Pritzker.

"Whatever you may read in the press, Democrats in Illinois are united," said Illinois Democratic County Chairs Association President Kristina Zahorik. "There's too much at stake to be divided."

.@GovPritzker with fighting words: “Four years ago, Bruce Rauner and his Republican allies in the General Assembly were executing his assault on human services, his assault on unions, his anti worker agenda. And we beat the hell out of him.” #twill

Zahorik made the remarks at the organization's annual brunch, the traditional kickoff of Democrat Day festivities. It was held in the parking lot of the Crowne Plaza in Springfield due to COVID-19 concerns.

Pritzker was noticeably absent, saying he made plans with his children that morning. He recorded a video for the event and would appear later in the day at the director's lawn of the Illinois State Fairgrounds to host the Governor's Day event.

Durbin attended the brunch event but skipped the Governor's Day rally. Durbin aide Bill Houlihan said the senator missed the event as he was traveling to Chicago for the visitation of Ella French, the Chicago police officer shot and killed earlier this month.

Pritzker and Kelly, who took over the mantle of party leader from former House Speaker Michael Madigan, dismissed any notion of party disunity.

"I have a great relationship with Robin Kelly," Pritzker said. "We've known each other for a number of years now. She knows that I support many of the things that she's done on gun safety and to lift up families across her district and across the state of Illinois."

Kelly, asked in an interview outside the party's tent on the fairgrounds if the party is unified, said "I think so."

"It's okay that we don't agree on everything," Kelly said. "Believe me, I serve in the House of Representatives in D.C. We're a big tent party. We will have it together when it comes to votes and those kinds of things. I'm not worried about that."

Here are some other sights, scenes and observations from Governor's Day at the Illinois State Fair:

The state fair is the traditional kickoff to political campaign season. And even though the state's primary election was moved back from March to June 2022, Pritzker's event on the lawn felt no less like a rally meant to fire up the troops ahead of political battle.

"Four years ago, Bruce Rauner and his Republican allies in the General Assembly were executing his assault on human services, his assault on unions, his anti-worker agenda. And we beat the hell out of him," Pritzker bellowed from the podium. "Now, because of Democrats, Illinois is finally moving in the right direction."

Pritzker went on to list some of his accomplishments over the past two-and-a-half years, such as the minimum wage increase, criminal justice reform and a capital construction bill.

White: Time to "ride off into the sunset"

Illinois Secretary of State Jesse White planned to retire in 2018, but said he was drafted by the labor unions to run again. Now 87-years-old, he said that's "not going to happen again."

"I've enjoyed government life and I'm gonna ride off into the sunset," White said, speaking to a gaggle of reporters at the fairgrounds.

"I've got to make a decision sometime in January, not necessarily right now," he said regarding a potential endorsement. "I have a suspicion that there's more people getting into the race."

Each of the candidates for secretary of state had the opportunity to speak at the brunch Wednesday morning, and many stuck around to chat with reporters afterward.

Dowell, a Chicago alderman since 2007, touted her experience with constituent services as a strength along with her lack of political ambition beyond the office.

"I think what sets me apart is that I'm truly a public servant that's looking to make this office a destination point for me," Dowell said. "It's not a stepping stone to a higher office."

Valencia said she was running on the principles of equity, access and modernization. She also touted her downstate roots and transferable skills she'd bring given some of the similar responsibilities she has in the clerk's office.

"We have big shoes to fill. And I think we should we should fill them with high heels," she told Democrats attending the brunch. "It's time to ask who will represent the future of the state and our party, who has the tools and the passion and the tenacity to build on Jesse White's record of service and integrity? That's why I'm running."

Giannoulias focused less on the specific responsibilities of the office and more on the general theme of restoring faith in government.

"I'm running for secretary of state to restore trust in our ability to make things better," he said. "We know what we need to do restore faith in government, put folks back to work, to protect working families and make sure more Illinois get ahead."

Moore said he would be proactive in looking for new revenue streams to reduce the burden on residents.

"As secretary of state, I want to use my skills not to increase fees, but find ways to create new revenues, like getting corporate advertising on license plates like they do in Texas, or using digital plates and technology to save money like they do in California, Arizona, and Michigan. There's a great opportunity, when we look around."

The secretary of state's office is Illinois' second-largest constitutional office after the governor’s office, employing more than 4,000 people, with responsibilities that exceed most of its counterpart offices in other states.

Among the Democrats who attended festivities was retiring Rep. Cheri Bustos, D-East Moline, who recently co-authored a report giving advice to swing-seat Democrats.

Who might be looking to take a swing at the tossup seat Bustos is about to vacate? State Rep. Mike Halpin, D-Rock Island, said he's still thinking about it.

"I'm just down here at the fair enjoying my time with fellow Democrats," Halpin said. "I'm definitely looking at what to do in the next election but haven't come to any formal decision. I'll make that in the next couple of weeks or so."

Halpin, who has served in the Illinois House since 2017 and was elected Rock Island County Democratic Party chair earlier this year, said "everything's kind of in flux" right now and that he's looking at all options, including reelection to the House or a run for Illinois Senate in a new district drawn to include the Quad Cities, Galesburg and Macomb.

Though the district went for former President Donald Trump twice, Democrats control the redistricting process, perhaps including more of Peoria and Rockford in an effort to add Democratic votes.

It’s been known since April that Illinois lost more than 18,000 people in the last decade, making it one of three states to lose population in that span.

Republican Day will take place Thursday at the Fairgrounds.

The search for the next superstar "American Idol" is on in Illinois.

Superintendents from public school districts across the state joined forces Wednesday in Springfield to oppose Gov. J.B. Pritzker’s school mask mandate after dozens of districts were put on probation this week for refusing to comply. 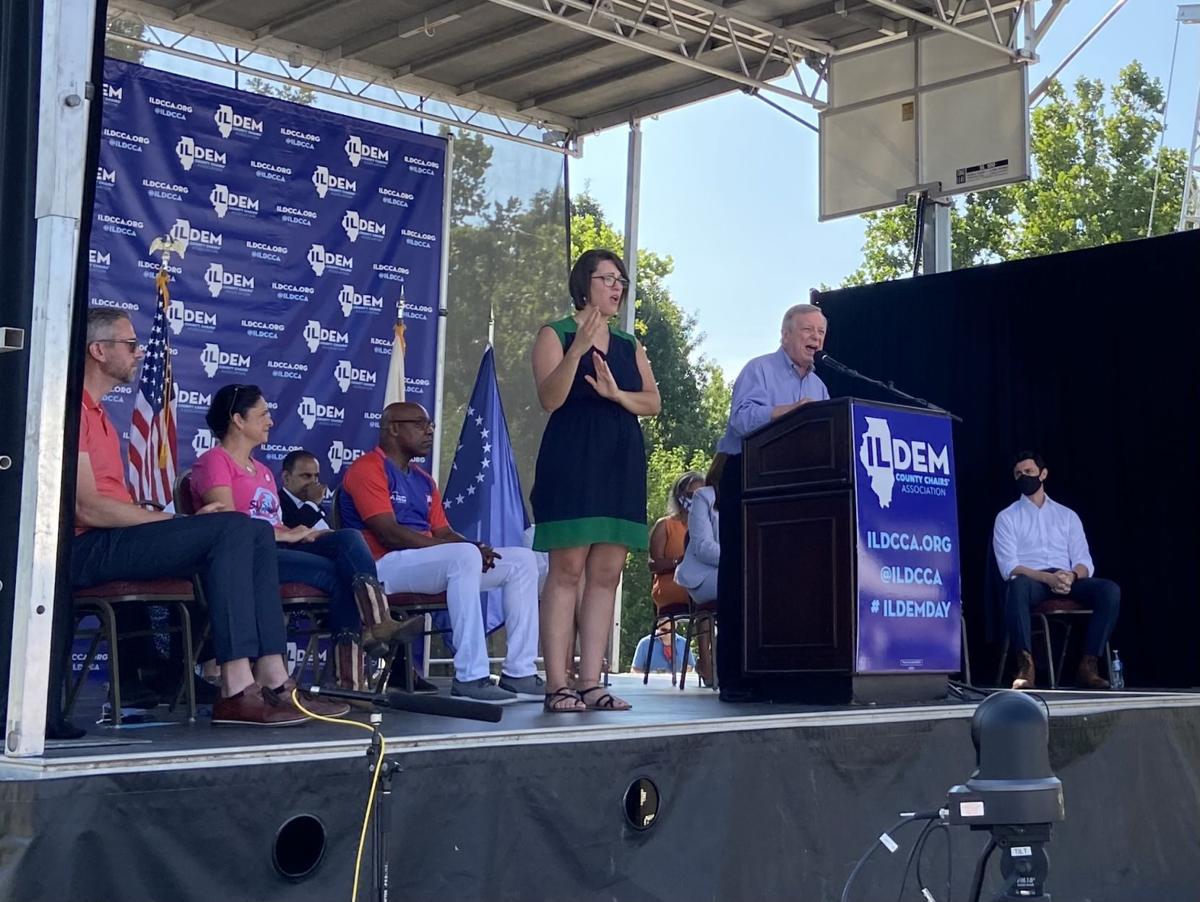 Sen. Dick Durbin speaks at the Illinois Democratic County Chairs Association brunch in the parking lot of the the Crowne Plaza Hotel in Springfield on Wednesday. 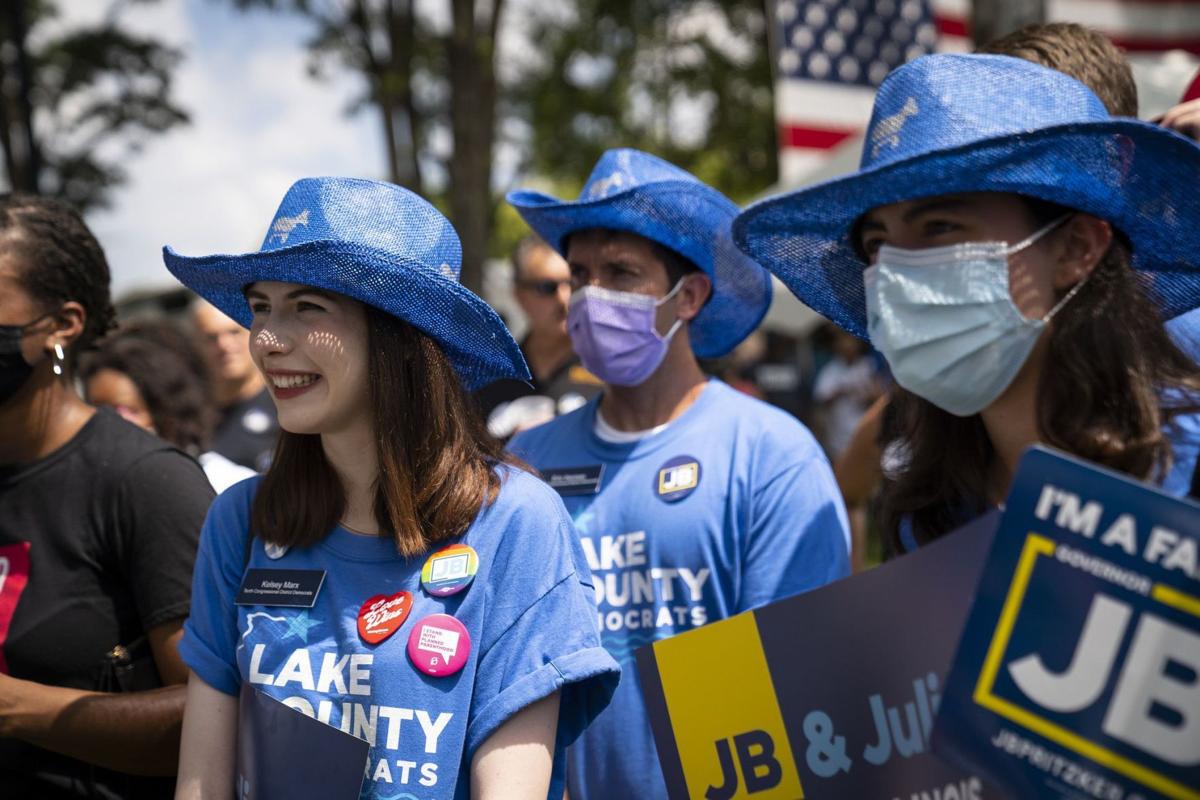 Kelsey Marx, left, and members of the Lake County Democrats listen to Gov. J.B. Pritzker during Governor's Day at the Illinois State Fair in Springfield on Wednesday. Republicans are scheduled to have their day at the fair on Thursday. 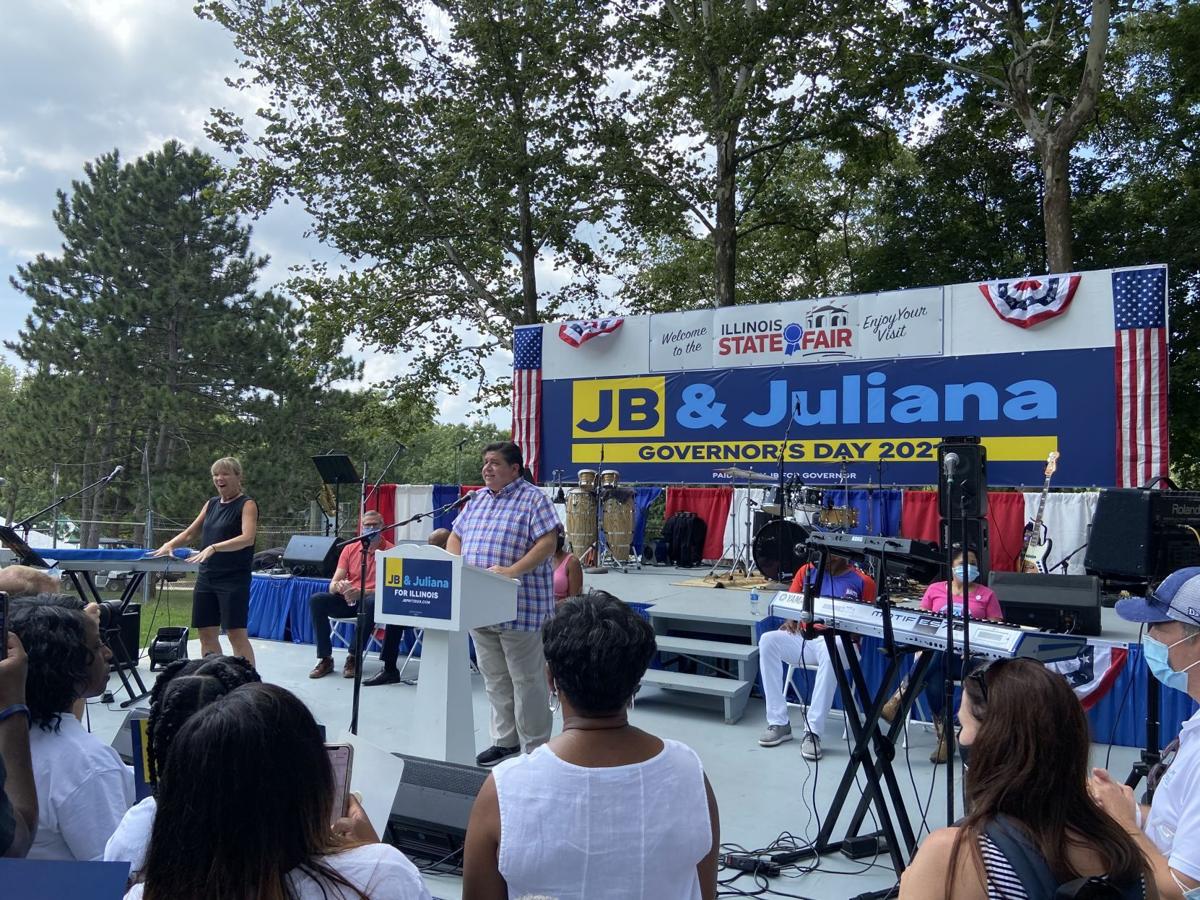 Illinois Gov. J.B. Pritzker speaks at a rally to mark Governor's Day at the Illinois State Fair on Wednesday.