Buildings throughout Chicago claim to have “survived” the 1871 fire, which destroyed just about everything, including edifices that were so-called fireproof, in a three-mile swath of the city.

How do you classify a “survivor” of the 1871 fire? There are several factors to consider, said Carl Smith, author of “Chicago’s Great Fire: The Destruction and Resurrection of an Iconic American City,” in an email to the Tribune.

Was the structure in the path of the fire — or was it outside the burn area? Was it compromised by the fire, did it remain mostly intact, or did only its shell remain standing?

“I don’t think there’s any best way,” Smith said. “I think it’s important to define what you mean by ‘survived’ when you use the term. I would assume it would mean that it might have some scorching or some minor damage, but that it remains integral in the way it was before the fire.”

Other buildings could have survived the fire, such as homes on Cleveland Avenue near Fullerton Parkway, but they were most likely just outside the fire perimeter.

Several buildings that not only withstood the fire but were still inhabitable afterward were later torn down. The Mahlon D. Ogden mansion, which was just north of Washington Square on North Clark Street, was demolished to make way for the Newberry Library in 1892. A circular water tank at the southeast corner of LaSalle and Adams streets — which held Chicago’s first public library — was torn down and the Rookery building was built in its place. The O’Leary house on DeKoven Street did not burn down, but was later razed.

Here’s a look at six structures that were in the path of the 1871 fire and remain standing today — though several had to be reconstructed post-fire because of interior damage:

The iconic structures are probably the most recognizable public landmarks to withstand the 1871 fire and are symbols of civic pride.

Both Gothic-style buildings were built in the 1860s and designed by William W. Boyington — who also designed the Illinois State Capitol in Springfield, the Illinois State Penitentiary in Joliet and the entrance to Rosehill Cemetery (where he’s also buried).

The Water Tower formerly contained an almost 140-foot-tall iron standpipe that was needed to provide water pressure for the city’s North Side, which was removed in 1911.

“Surely no pipe was ever so ornately wrapped as this one, clad in a pale golden limestone carved from quarries around Lemont,” former Tribune reporter Charles Leroux wrote in 2007.

The Water Tower, at 806 N. Michigan Ave., houses City Gallery, which features work by local photographers and artists. Because of COVID-19, however, it is closed to the public. The pumping station still functions, but most of its interior space is now used by Lookingglass Theatre Co., which moved to the site in 2003.

Like the city’s Water Tower, the wooden Italianate building is designed by Boyington.

The house was saved from the fire by the quick thinking of Bellinger, who along with his brother-in-law and another policeman ripped up the wooden sidewalk and picket fence surrounding the house, as well as the wooden front porch, to form a fire break.

The men soaked rugs and blankets in Bellinger’s well and carried them to the shingle roof to protect it from cinders falling from the sky. When the well ran dry, Bellinger ran to nearby Ten-Mile ditch for refills.

Legend has it that when the well ran dry, a keg of cider from Bellinger’s cellar was appropriated to douse the last flames. The fable was so fetching that it even found its way into Chicago Public School textbooks.

Mrs. Bellinger, however, is reported to have told a subsequent owner of the home that the cider was not needed, at least to fight the fire — but maybe it was passed around to those who found refuge in the cottage.

A letter published in the Tribune in 1921 by a writer with the initials “J.C.” claimed she was one of 21 people taken in by the Bellinger family after the fire.

The cottage remains a private home, though there had been threats to tear it down. A previous owner didn’t want the structure to become a historical landmark in the 1960s, but did allow a plaque citing the site’s significance to be placed out front. The Bellinger Cottage was designated a historic and architectural landmark by the Chicago Landmarks Commission in 1977.

The walls of St. Michael — but almost nothing else — withstood the fire. Quick-acting congregants saved an icon of Mary known as Our Mother of Perpetual Help, which was one of four replicas sent to the United States from the original icon’s home at St. Alphonsus Church in Rome.

Rebuilding began within a week of the fire and the church was rededicated in 1873.

The church continues to welcome visitors and worshippers almost 170 years after it was founded.

Like St. Michael’s Church, Unity Church was severely damaged by the fire with only its limestone walls remaining, yet its congregation was eager to rebuild. Architect Dankmar Adler — prior to his partnership with Louis Sullivan — rebuilt the church roof, modified its seating arrangements and redesigned acoustics.

The Scottish Rite, operated by Masons, took over the building in 1910 and covered up its rose and stained-glass windows.

A developer restored the structure’s exterior in exchange for rights to an adjacent project in 2005 and received an excellence in preservation award in 2011.

Harvest Bible Chapel has been based at the site since 2012.

The congregation was founded in 1834 and its church opened at this site in 1857. Abraham Lincoln prayed at St. James, which is the oldest in the Episcopal Diocese of Chicago, shortly after he was elected president in 1860.

Days after the fire, congregants gathered for a service inside the burnt-out edifice and decided to rebuild. The church’s stone walls, bell tower and its Civil War Soldier’s Memorial had been spared and reincorporated into the restored church, which was completed in 1875.

Some say scorch marks from the 1871 fire are still visible on St. James’ bell tower.

Robert D. Black, a church canon and director of finance and administration for St. James Cathedral, has another explanation for the darkened stains — pollution.

“There is a photo in a book on our history that shows the top of the tower a day or two after the fire and the top is not black. The decorative parts of the tower are made of sandstone, which is very porous, while the facade is limestone,” Black wrote in an email to the Tribune.

Black said the Civil War memorial survived because of fireproofing done by the family of the city’s first mayor, William B. Ogden.

The church became the cathedral for the Episcopal Diocese in 1955 and continues to welcome congregants.

Hundreds of thousands in fundraising dollars, two years and one pandemic later, the Healthy Me! exhibit at the Children's Discovery Museum in Normal is open for business. 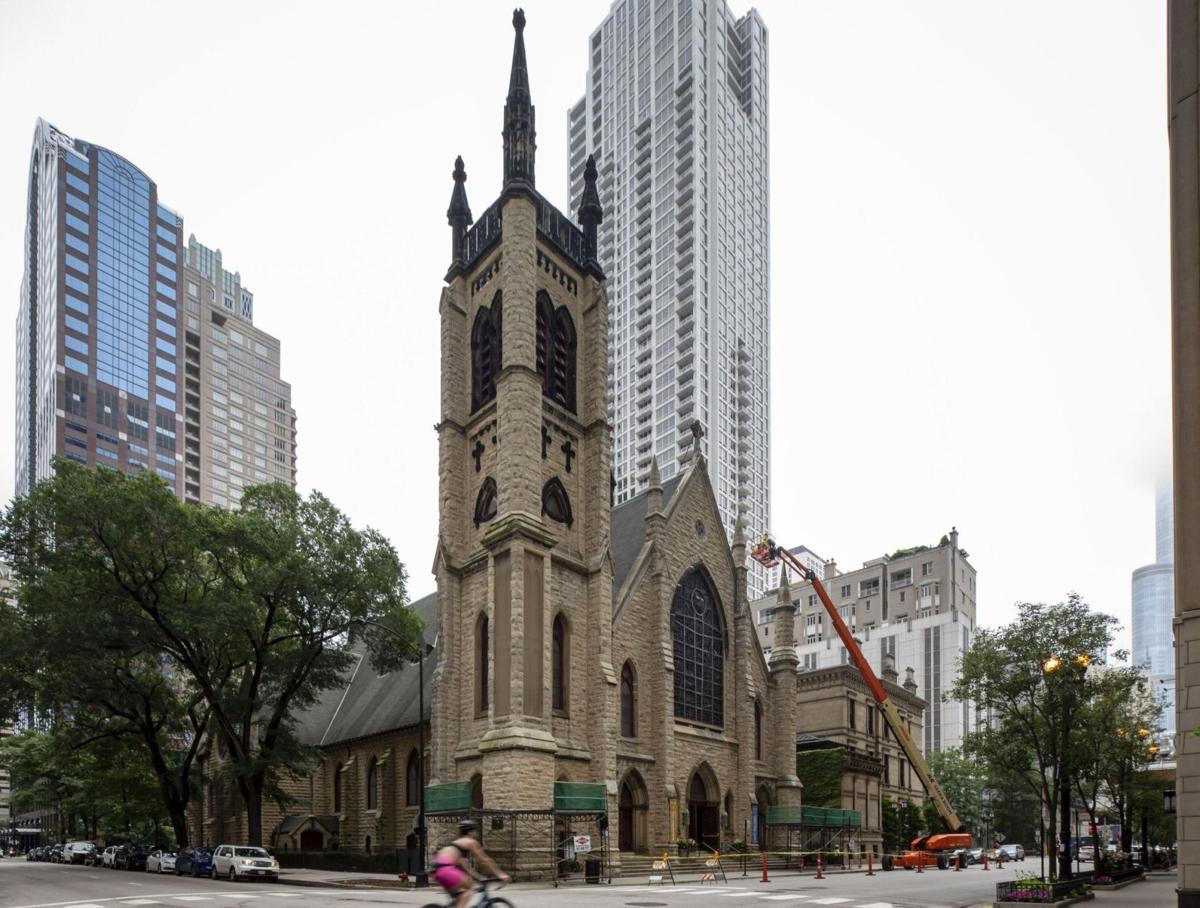 The bell tower of St. James Episcopal Cathedral in River North survived the Great Chicago Fire in 1871, though much of the church burned. Contrary to popular myth, the blackened spires were caused by later pollution, not by the fire, according to church official Robert Black. 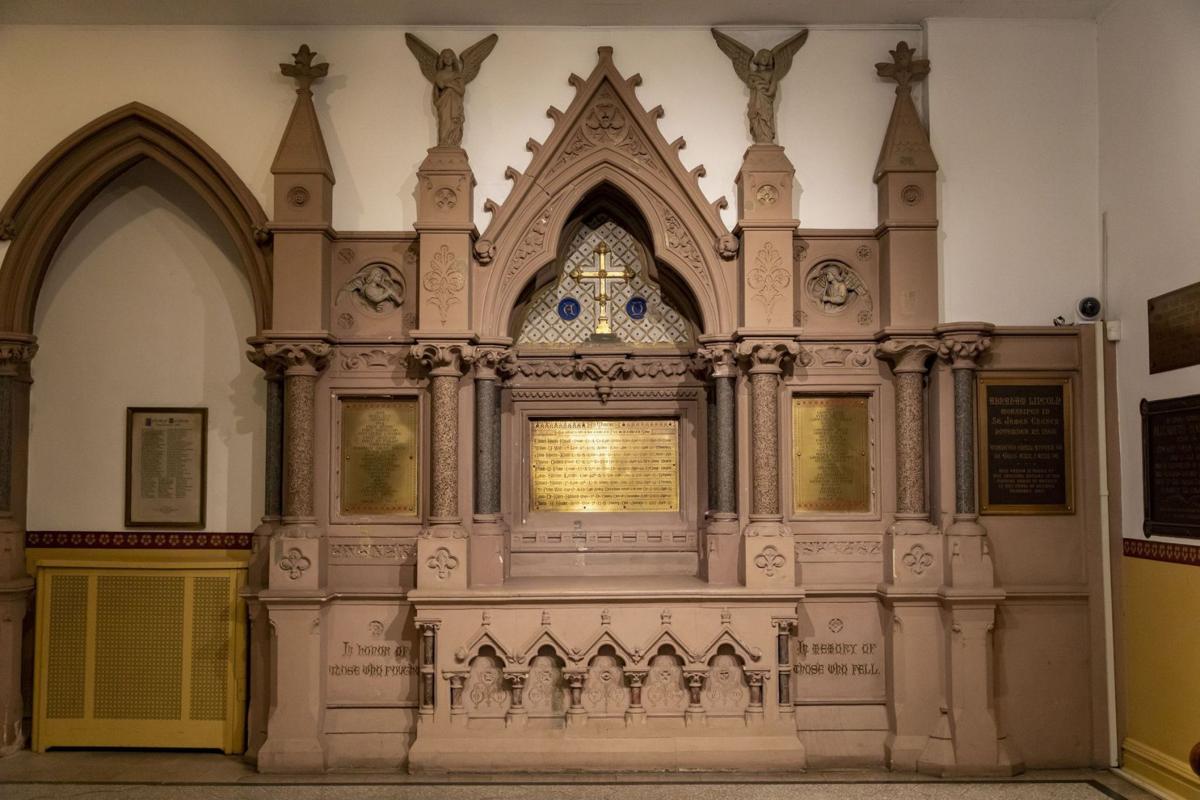 A Civil War Soldier's Memorial inside the base of the bell tower of St. James Episcopal Cathedral in River North that survived the Great Chicago Fire in 1871. 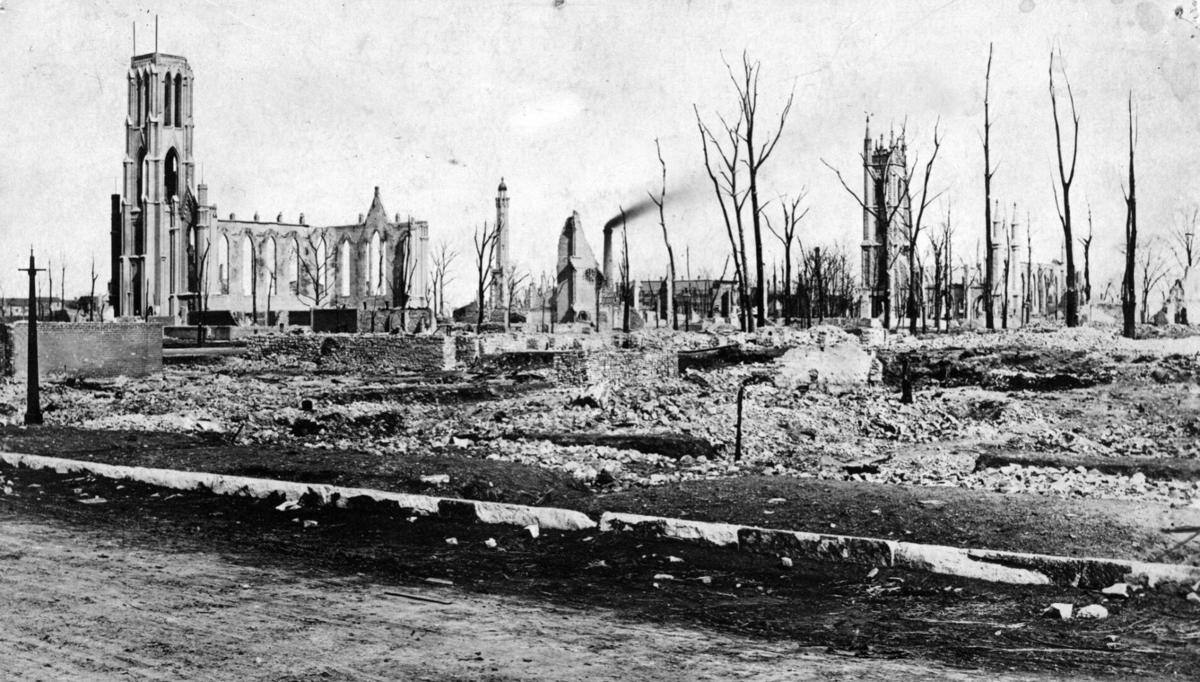 Holy Name Cathedral, left, and St. James Episcopal Church, right, lay in ruins after the Great Chicago Fire in 1871. Between them, in the background, stands the old water tower. 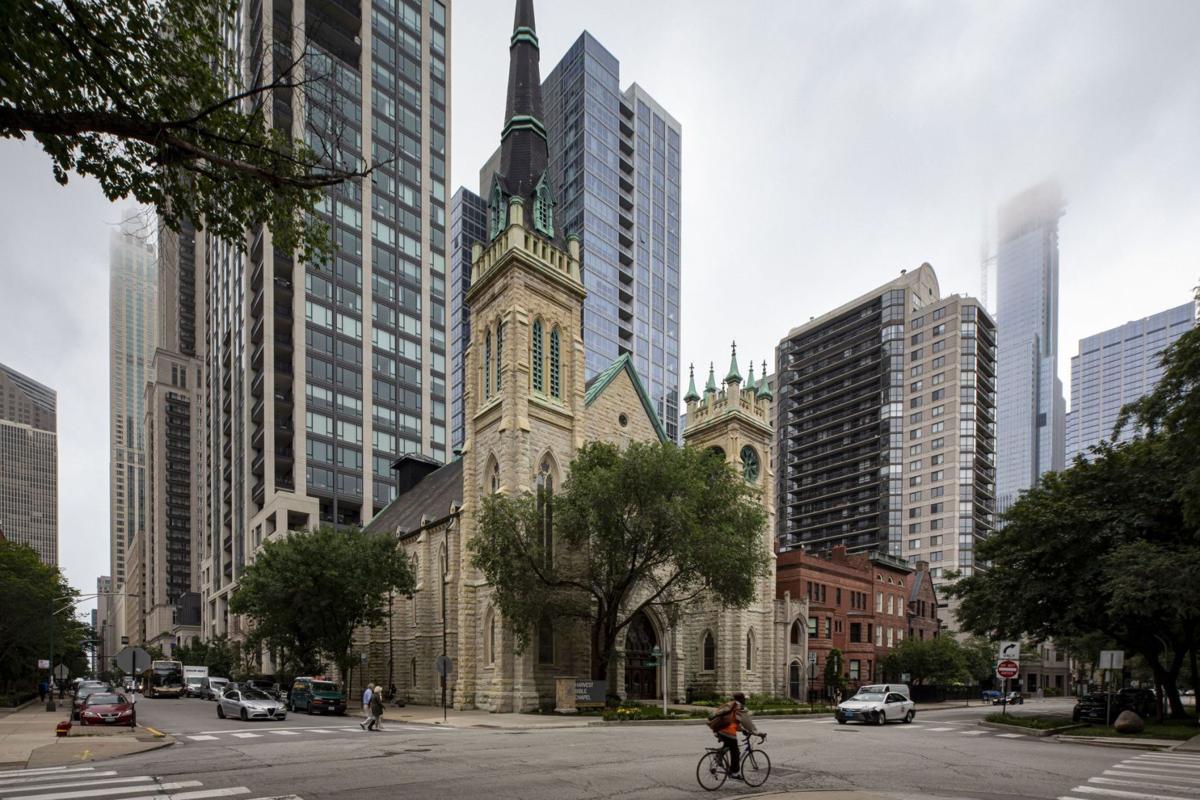 The former Unity Church on Washington Square Park where some of the walls survived the Great Chicago Fire in 1871 and are part of the rebuilt structure, July 12, 2021. 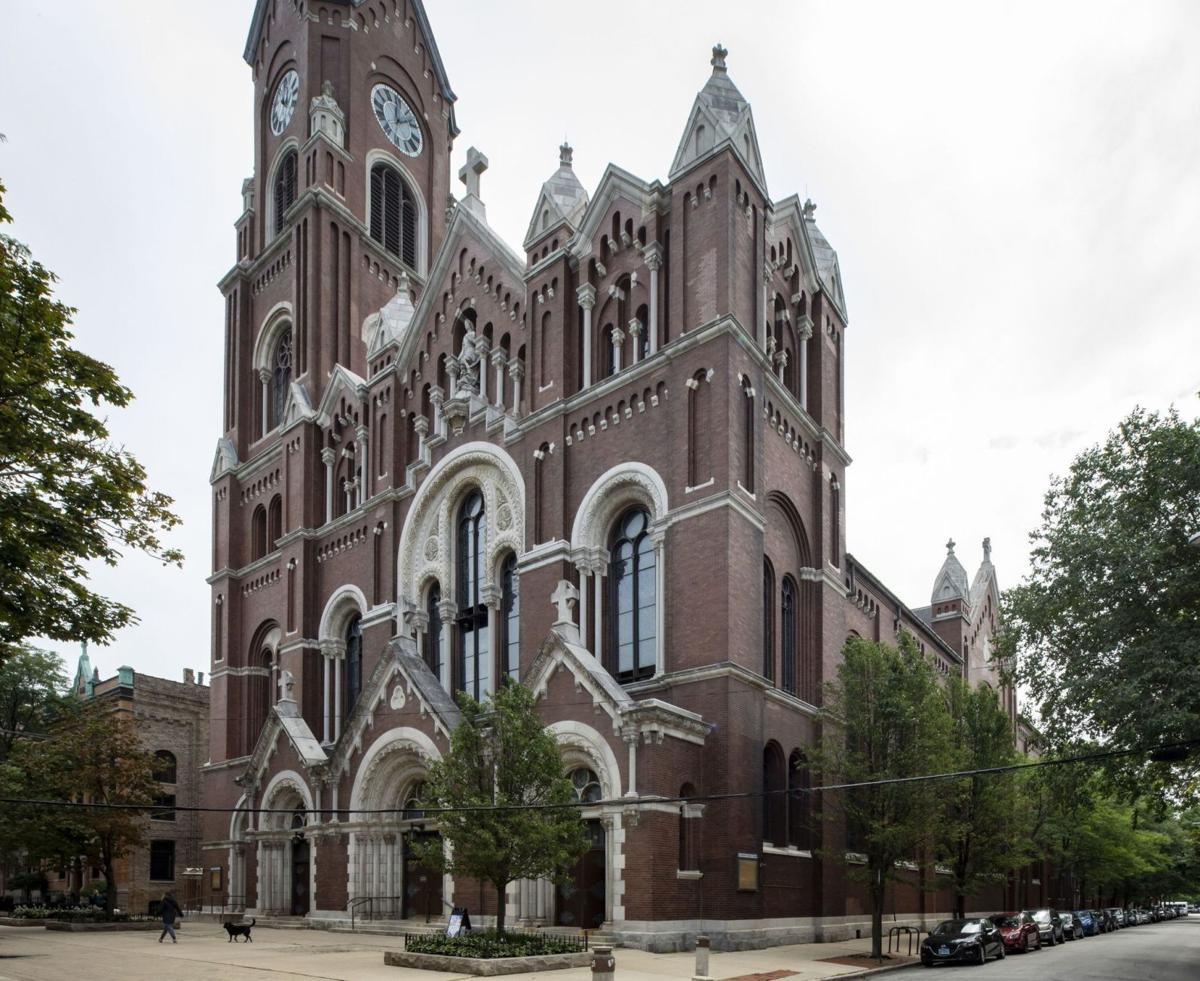 The walls of St. Michael's Church in Old Town survived the Great Chicago Fire in 1871, though it sustained heavy damage. The belltower was rebuilt after the fire. 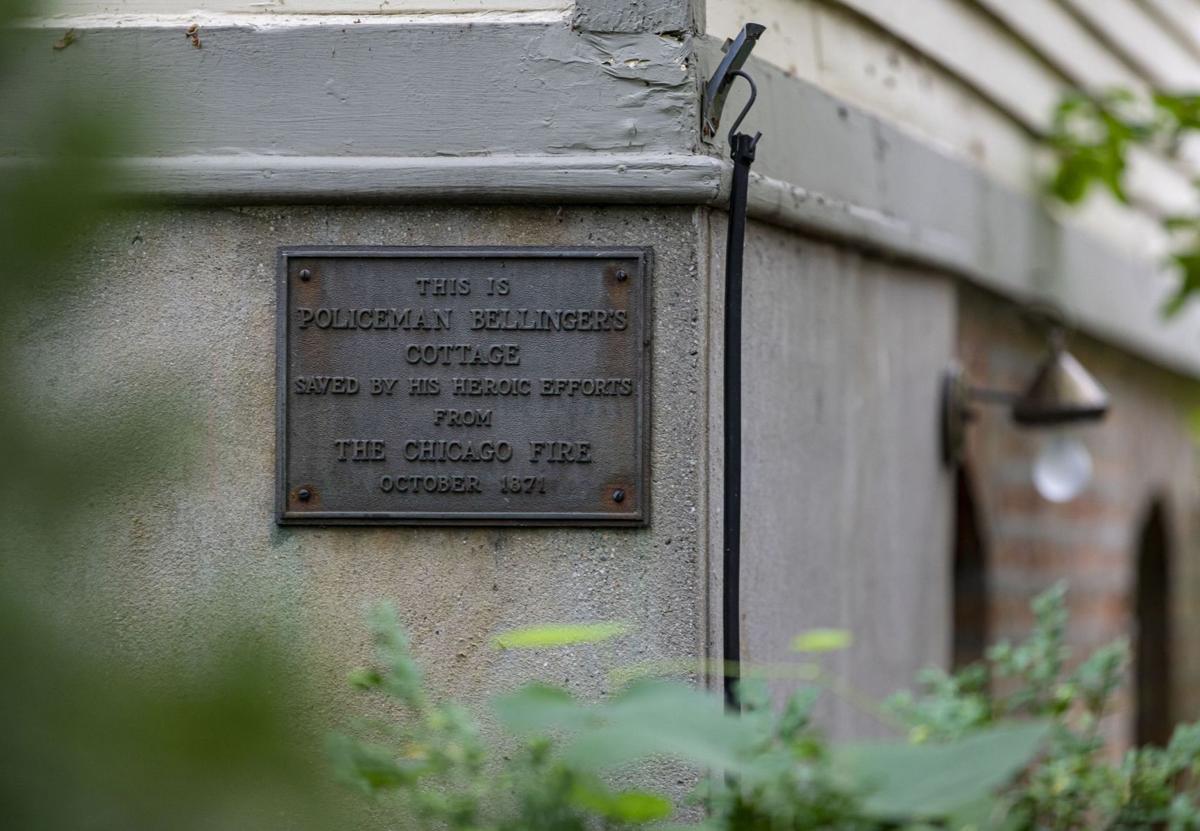 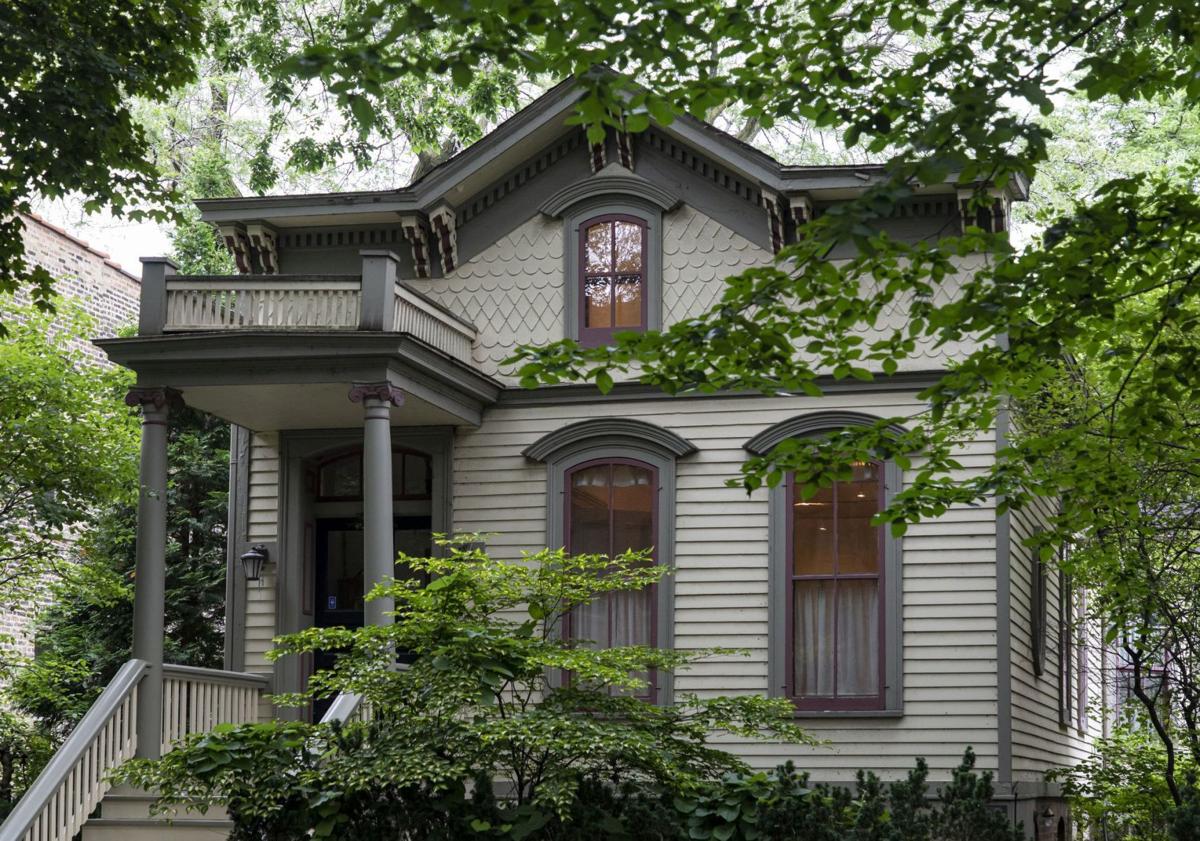 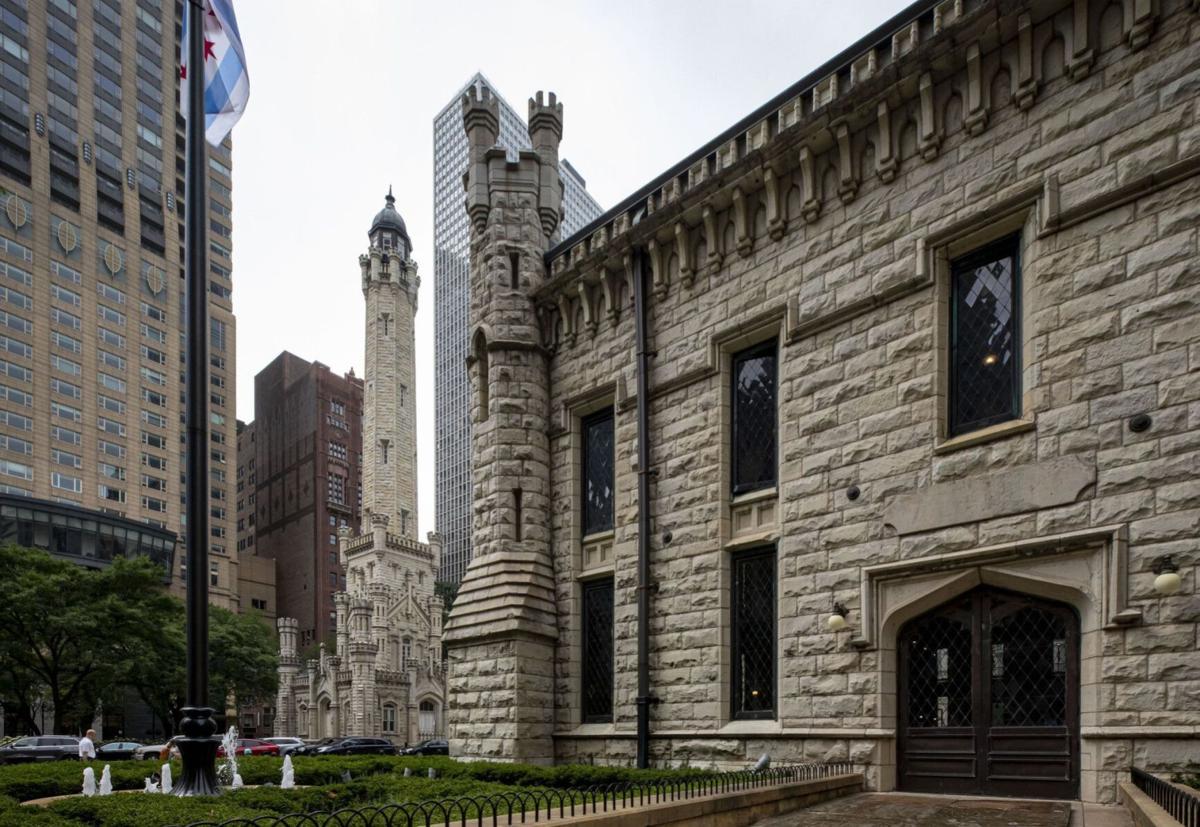 The Chicago Water Tower and Pumping Station along Michigan Avenue that survived the Great Chicago Fire in 1871, July 12, 2021. 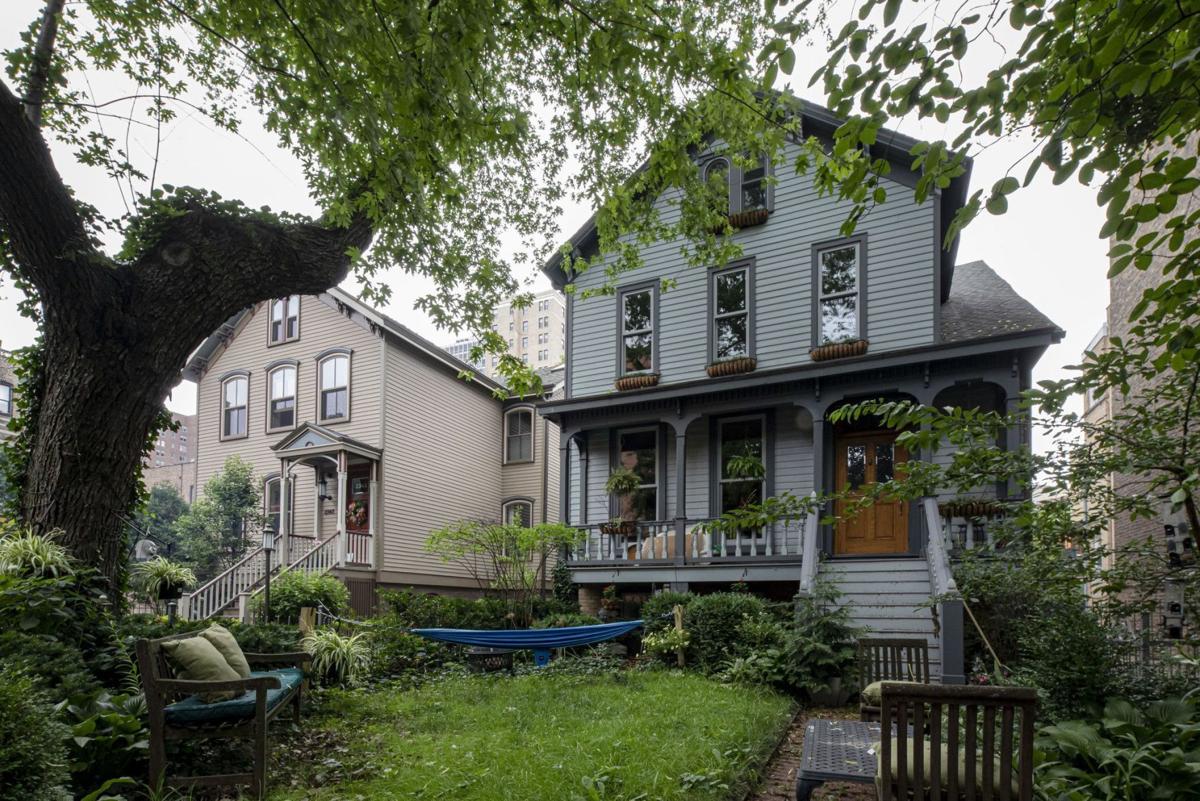 Houses at 2343 and 2339 N. Cleveland Ave. survived the Great Chicago Fire as the burnt district ended nearby at Clark Street and Fullerton Parkway, July 12, 2021.