BLOOMINGTON — The 3rd Sunday Market had the McLean County Fairgrounds buzzing for the first time in a long time.

“We’re just thrilled to be out and doing what we can,” said Emily Raycraft, who promotes the once-a-month event with her husband, Mike.

Sunday’s event was the first 3rd Sunday Market since February 2020, as the coronavirus pandemic shuttered large events for over a year.

Held on each third Sunday of the month, the market contains about 450 vendors from 17 states featuring heaps of items, as Emily Raycraft said there’s “something for everyone.”

The market runs from May through October, but Emily Raycraft said they also hold smaller events in February and November that are usually indoors.

Mike Raycraft, whose parents started the event in 1988, said they worked with the McLean County Health Department and the McLean County Farm Bureau on strategies to make this year’s events work in a “safe atmosphere.”

The majority of market-goers were mask-less, days after the Centers for Disease Control and Prevention said those vaccinated against COVID-19 can discard their face coverings in most cases.

For most people, Sunday was simply a nice day to be outside.

“We like antiques and we like being out. It’s beautiful,” said Julia Johnson, who attended with her husband, Reg.

The couple drove up to Bloomington from south of Jacksonville for at least their sixth year of coming to the 3rd Sunday Market.

“It’s just a good day to be out doing something because (we) haven’t been able. We’ve been locked up for so long and everything,” Reg Johnson said. “We’re regulars coming up here and we like to collect, and there’s a lot of options of things to collect when we come to these. We just enjoy it, being able to look at all kinds of different old stuff.”

The types of items sold across the two large buildings, four barns and vendors spaced throughout the fairgrounds varied widely.

Todd Kingery was affixing a Tyrannosaurus rex he had made of sticks and twigs with a pneumatic nail gun.

He sold a variety of animals made of wooden sticks. The largest displayed was about a 6-foot-long shark.

Kingery comes to the market about once or twice every year since he began making rustic art and twig furniture in 1995. This is his first year selling the animal art, so he wanted to test the market because he enjoys making the animals more than the furniture.

Debbie Cox, of Walshville, sold willow furniture. She and her husband have been selling at the 3rd Sunday Market “off and on” for about 25 years.

Cox and Kingery said it takes them a few hours or up to a couple of days to assemble a product, depending on the project.

“You gather up the willow from swampy areas like creeks and rivers, and low places,” Cox said. “Then you trim all the little branches off it and then you have to use it within a certain length of time, really quickly, because it dries out.”

Using it quickly is key, as it allows the wood to bend and generate different shapes.

Dan and Gina Rubner, of Cameron, sold handmade jewelry and accessories derived from silverware. One item was a wind chime made from spoons and forks redesigned as sea animals.

Carl Cortese, of Bloomington, was walking out of the market with a small wooden chair redesigned as a plant holder, which he bought for his cabin at Lake Bloomington.

“I’ve been coming here for years. This is a nice place,” Cortese said. “You get vegetables here, plants here. It’s a lot going on.”

Photos: The Barn III in Goodfield expands to provide a wedding venue after COVID

After weeks and months of waiting, Illinois will enter the bridge phase of the Restore Illinois reopening plan Friday. The newest phase is int…

As of Sunday afternoon, 136,125 doses of COVID-19 vaccine have been administered in McLean County, with 63,652 people, or 36.83% of the population, being fully vaccinated, according to IDPH.

McLean County's rolling seven-day COVID test positivity rate is at 2.5% as of Sunday, a figure not seen since early and mid-March, when the percentage hovered between 2 and 3%.

Town leaders got a first look at how to spend roughly $10.8 million from the federal government for coronavirus relief efforts. 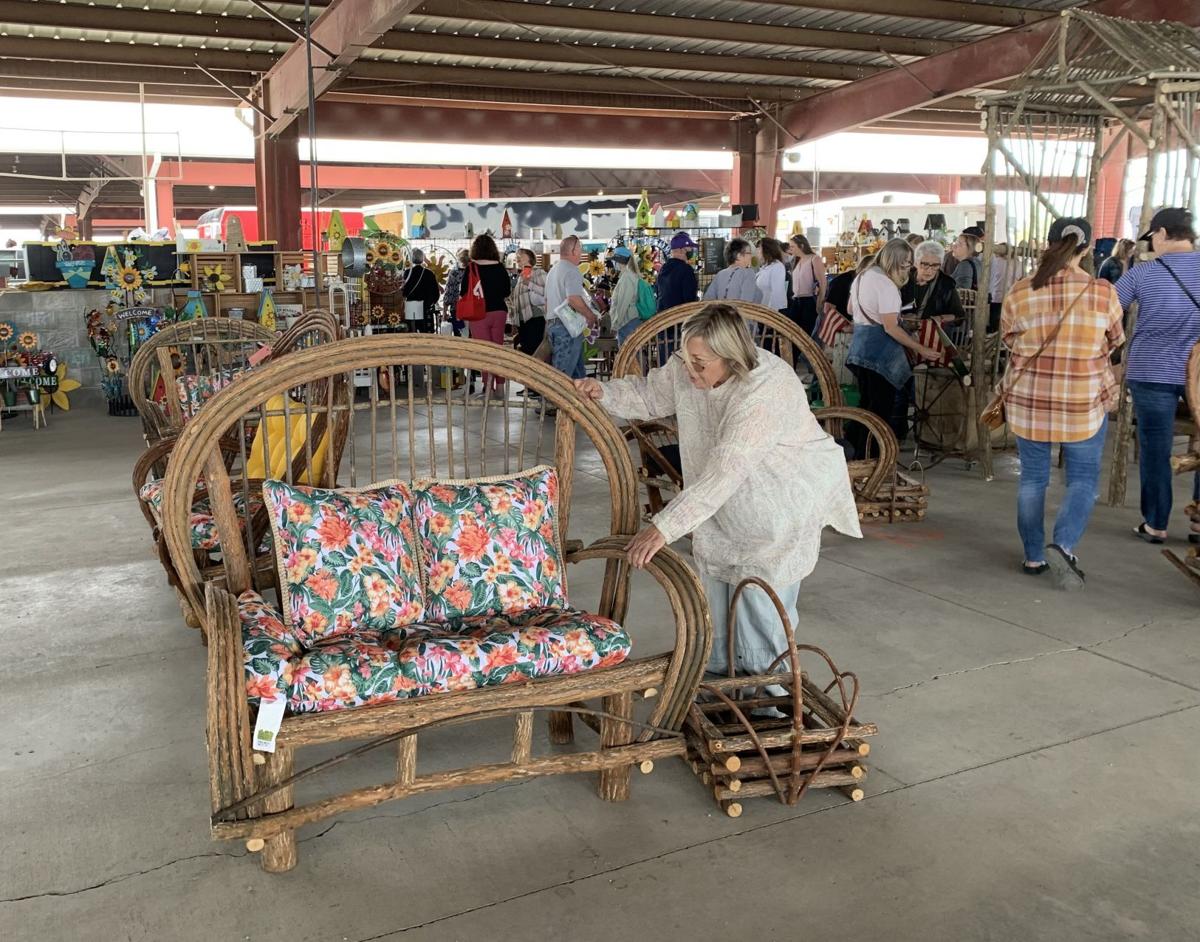 Debbie Cox, of Walshville, repositions a piece of willow furniture at the 3rd Sunday Market in Bloomington on Sunday. 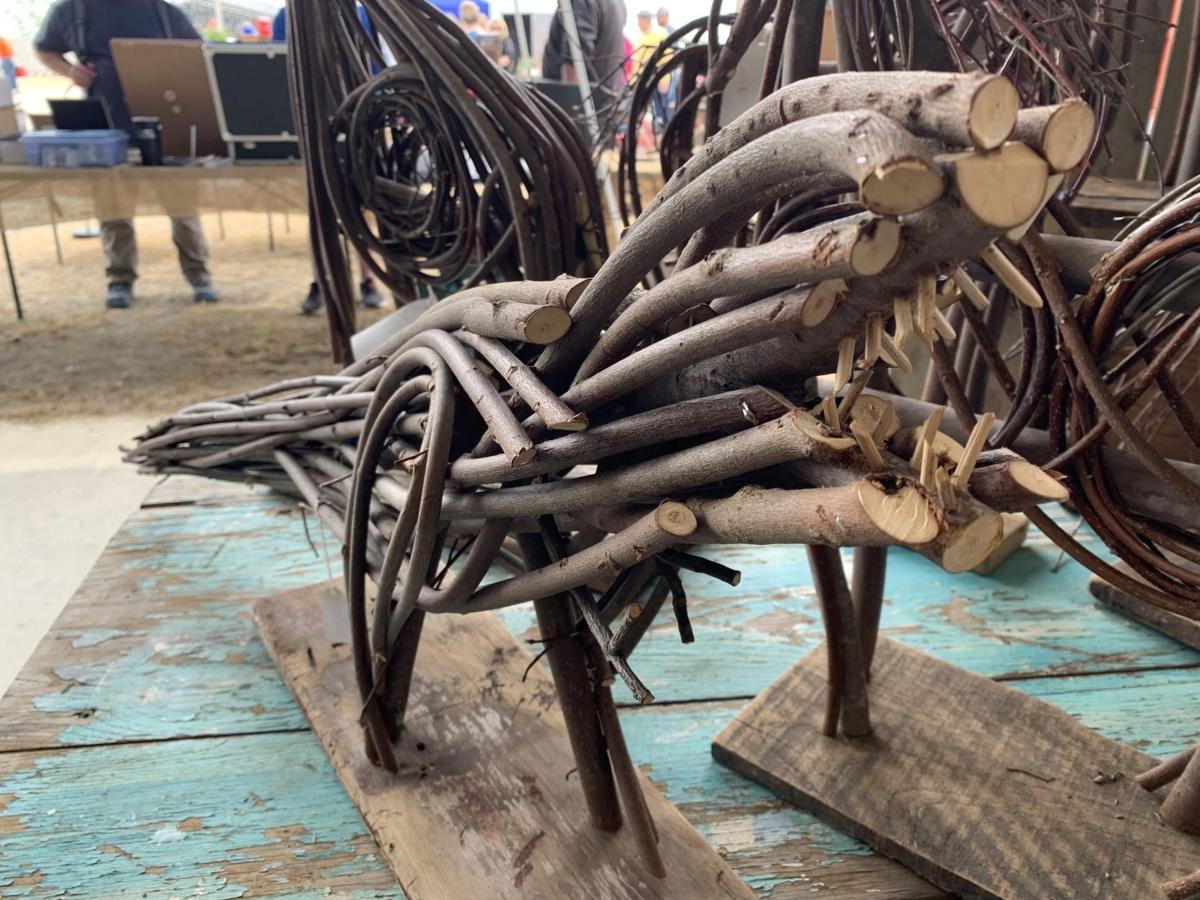 A Tyrannosaurus rex made of wooden sticks by artist and furniture builder Todd Kingery is displayed at the 3rd Sunday Market in Bloomington on Sunday. 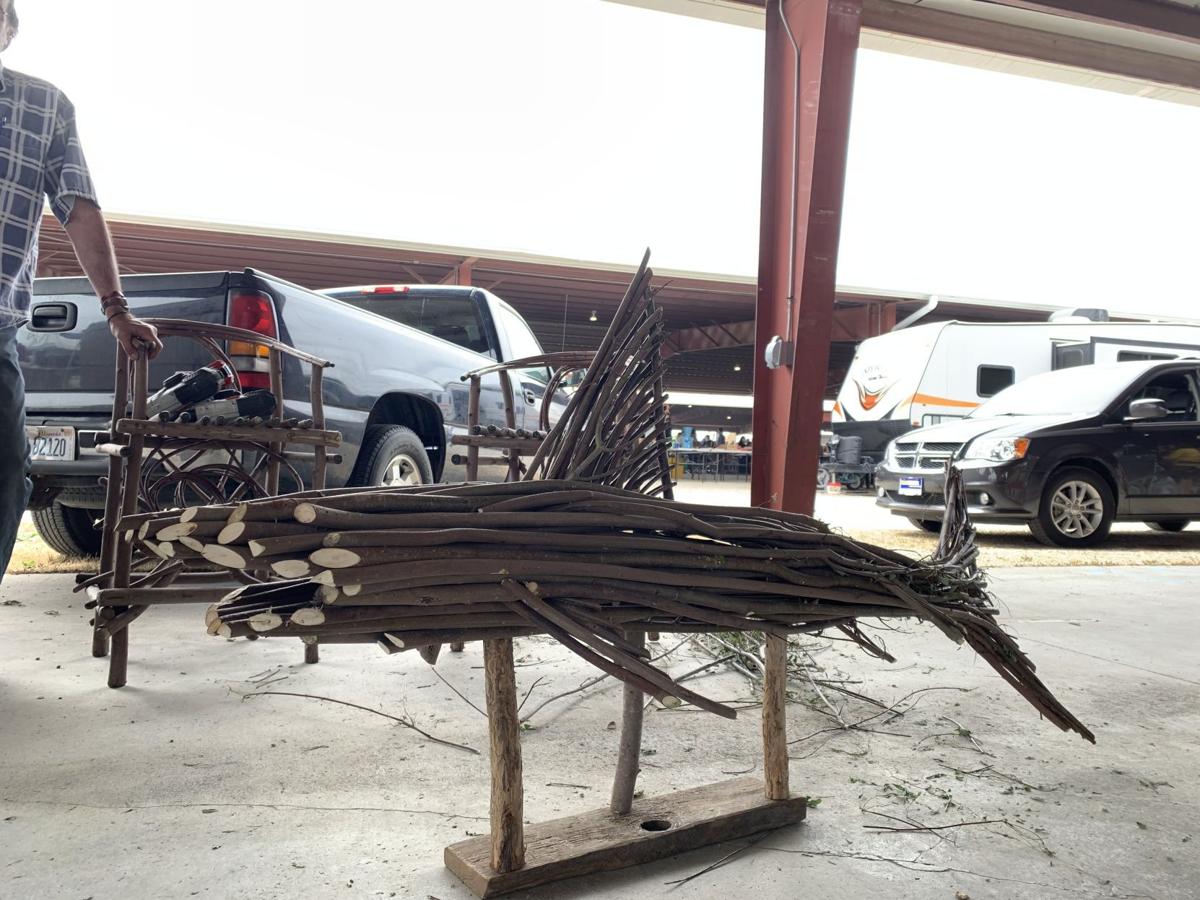 Todd Kingery, a rustic artist and furniture builder from south of Effingham, displays a wooden shark he constructed at the 3rd Sunday Market in Bloomington on Sunday. 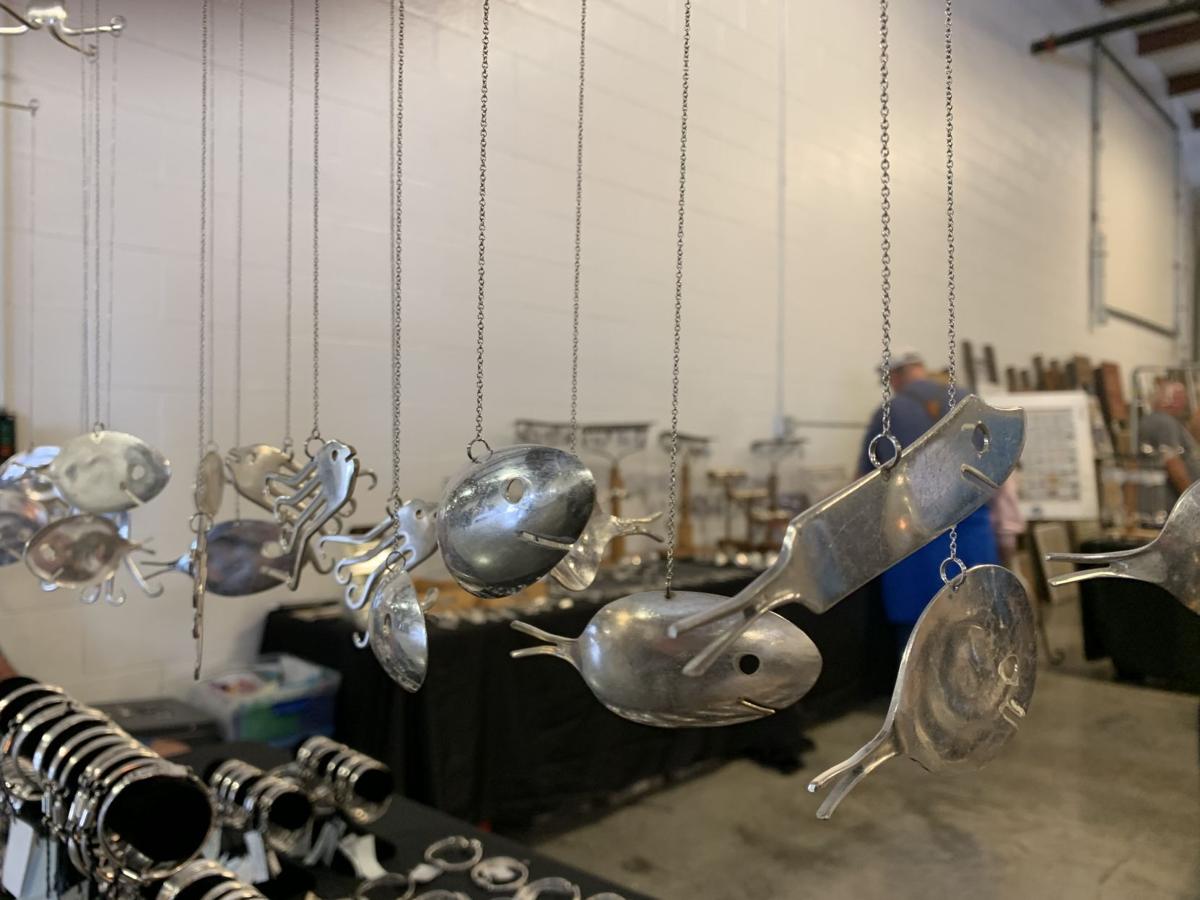 Dan and Gina Rubner, of Cameron, created wind chimes from spoons and forks. Their business, D&G Flatware Jewelry, was one of 450 vendors at the 3rd Sunday Market at the McLean County Fairgrounds in Bloomington on Sunday. 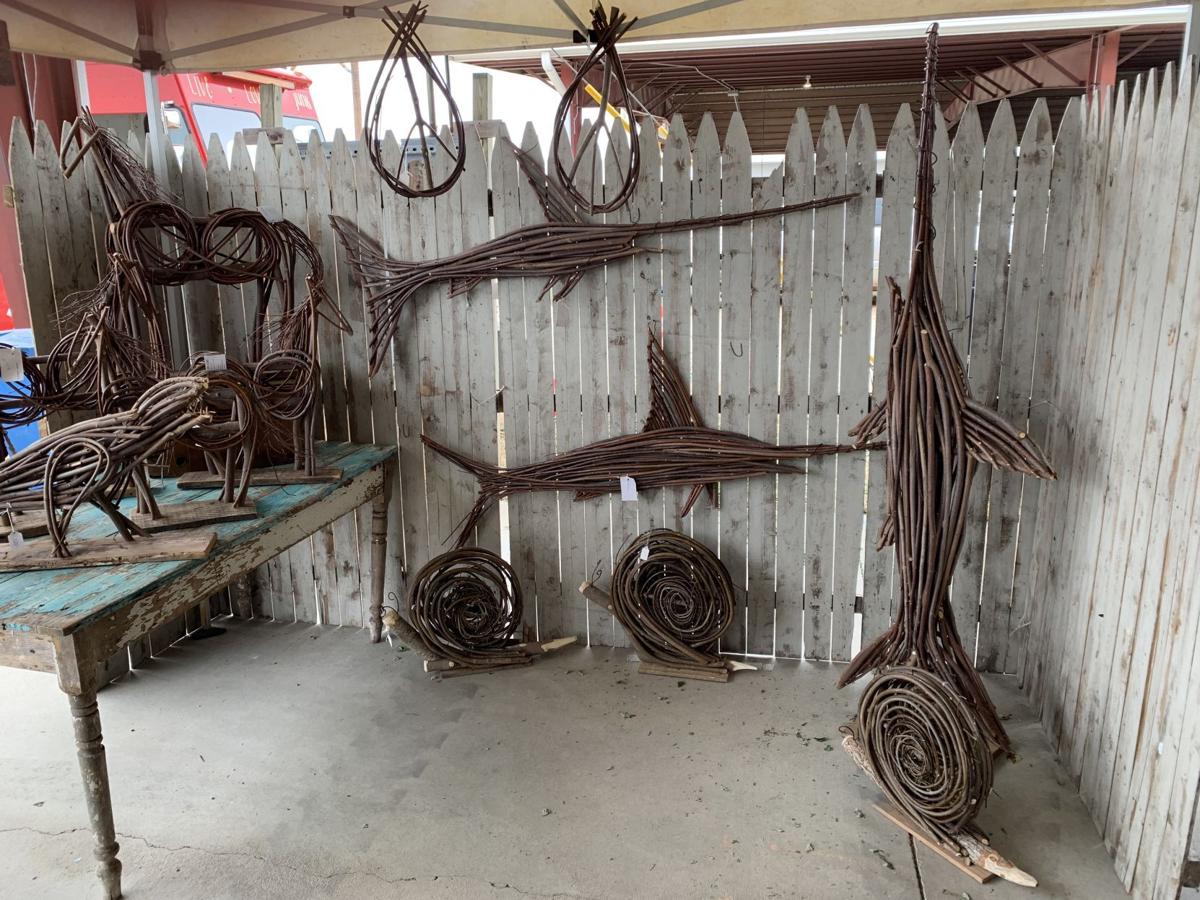 Todd Kingery, from south of Effingham, displayed his artwork of animals made of sticks and twigs at the 3rd Sunday Market at the McLean County Fairgrounds in Bloomington on Sunday.