BLOOMINGTON — The concrete lady who lies beneath the bridge carrying traffic into downtown Bloomington finally has her protector.

“Her guardian, her defender” was added to the installation this week by local sculptor Tom Kirk and other artists at 410 S. Madison St., the first pieces to find home in his future outdoor sculpture park.

“My goal is to have local or other artists display their work here. I don’t want it to just be all my stuff; I’d like to see other people do it,” Kirk said. “So what I’m hoping to do is just build a couple of attractions that gain interest, and then if other people put their stuff down here, that’d be super cool.”

Formed from industrial parts and standing on a pedestal filled with stone, the protector towers above the unnamed woman, caped and shielded in red with a spiked mace and sword in hand, watching both directions through her glass amber eye.

Her design was a collaborative effort with Carmen Lozar’s students at Illinois Wesleyan University, where Kirk was brought in as a guest artist to speak.

Kirk, who also works full-time as co-owner of Henson Disposal, took their model and brought it to full size, with plenty of help.

Addison Kirk, his 15-year-old daughter who welds; Isaac Goughnour, an 18-year-old welder who will work with Kirk full-time once he finishes her senior year at Bloomington High School; painter Jeff Bess; and Kirk’s girlfriend, Sara Busing, helped to create the protector.

Lozar, who is a glass artist in addition to serving as an adjunct assistant professor and director of galleries for IWU, also made the protector’s eyes and other glass pieces.

“The shield in front of that is to protect her eye, like in battle, and this second eye will go underneath that eye,” Kirk said. Additional glass pieces will be added behind the sword from a student’s idea, in which “the only way you could hurt the protector was if you damaged that (mark).”

Before the protector assumed guard over her charge, the concrete lady was framed and filled with stones and personal items, when Kirk was hoping he could sculpt great detail into her final form. She was poured in December with help from Kirk’s friend Josh Matlock and several others, but the 12.5 yards worth of concrete proved more difficult than they expected.

“It was beautiful and then we went to put concrete over it and I was like ‘oh…’” he said. “You couldn’t shape it, you just couldn’t. It just wants to go down. … We started at the (foot) and when we got to the head, the concrete was getting hard and we struggled.”

Still, she’s gained countless speculative fans since she was cast, many calling her a mermaid with a tail that runs into the truck’s spout.

Busing said she doesn’t see a mermaid either.

But the flowy concrete lady is not quite done. A mosaic “fireball” of light will be added between her open hands and her chin tilted to the sky, to provide some visibility in the lot that’s currently scattered with building material.

Kirk is no stranger to the curious eyes that found his concrete lady before her protector came to stand beside her.

His home on Garling Drive in southeast Bloomington has drawn similar attention since he started building sculptures inside and out in the last six or so years.

“I just realized I really liked building stuff and I haven’t stopped. Hopefully, I don’t,” Kirk said, noting he began by using it as a sort of art therapy after his divorce, giving him direction.

Once a year, Kirk opens his home for public viewing, and this year, he’s planning to coincide the open house with the Cogs and Corsets festival taking over downtown Bloomington on June 3 and 4.

As his sculpture park begins to grow, Kirk said any other artist who wants their work to be displayed on a rotating basis should reach out by email at tomkirk13@yahoo.com.

This latest sculpture and park project are not his only ambitions though.

Kirk also purchased a building at 403 S. Madison St. called “The Powerhouse,” with plans to transform it into a smaller version of the warehouse-style City Museum in downtown St. Louis, beginning in December.

“This will be like the outside of the City Museum and that’ll be the inside,” Kirk said, pointing across the street.

Busing compared the projects to Maurice Sendak’s “Where the Wild Things Are,” and Kirk agreed.

“It can really be whatever you want. … That’ll take me the rest of my life.”

No damage estimate has been made, but investigators determined the fire to be caused by unattended cooking, which is the leading cause of home fires in America, according to the National Fire Protection Association.

With little ones still sprouting at home, four Bloomington moms have taken their passions and hobbies and grown them into flourishing backyard flower farms and a bustling home-based bakery.

How are you celebrating Mother's Day? The Pantagraph caught up with some Central Illinois moms to find out.

The Jule Foundation will host its first Teen Summit on May 20, bringing local middle and high school students together to hear about planning and working toward their futures.

Why the colors of sunsets are so incredible

Why the colors of sunsets are so incredible 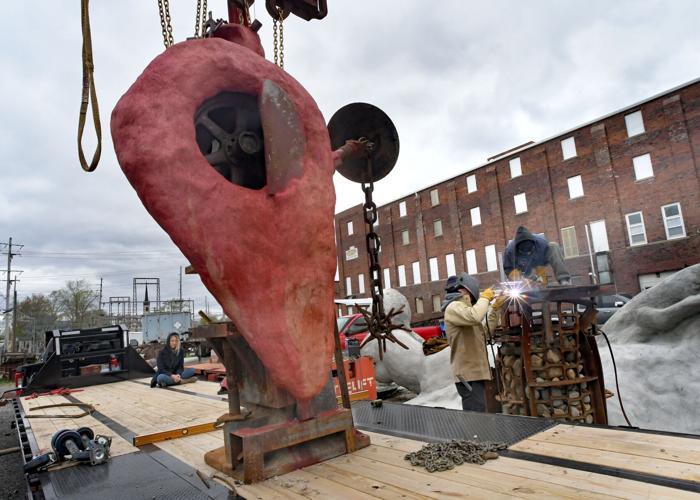 Sculptors Tom Kirk and his daughter Addison Kirk work on the base for Tom's guardian figure that will stand guard over the giant concrete lady in his sculpture park in the 400 block of S. Madison St. 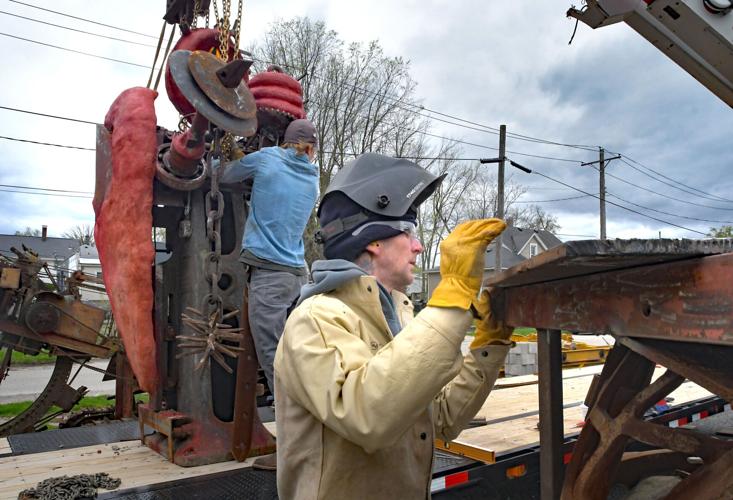 Sculptor Tom Kirk, right, assembles the base for the guardian figure that will stand guard over the giant concrete lady in his sculpture park as welder Isaac Goughnour readies the sculpture before it is moved onto the base. 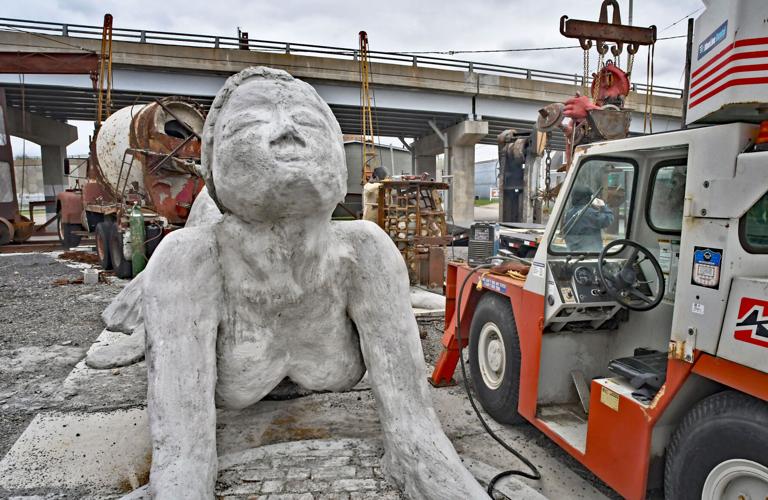 Tom Kirk's guardian figure will stand guard over the giant concrete lady in his sculpture park in the 400 block of S. Madison St. 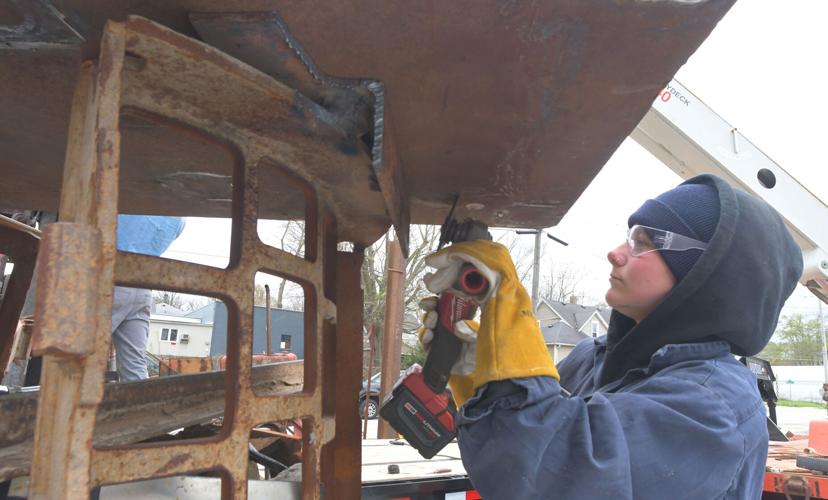 Sculptor Addison Kirk grinds metal welds on the base for her father Tom's guardian figure that will stand guard over the giant concrete lady in his sculpture park in the 400 block of S. Madison St. 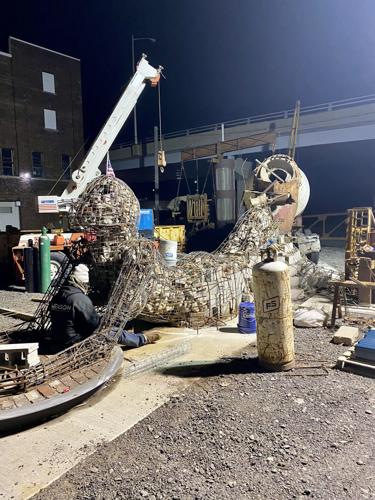