BLOOMINGTON — There’s nothing like a jog on a bright, cold November morning to get folks ready for a big Thanksgiving meal; at least that was the case for some of the nearly 1,200 runners and walkers who headed to Miller Park early Thursday morning.

The 43rd annual Bloomington Turkey Trot marked a return to an in-person race and gave runners a chance to wake up with a little healthy exercise.

“I’m the fastest in the family,” 5-year-old Timmy Benjamin said, throwing his fist into the air before starting his first trot.

His mom, Mallory Benjamin, said he wanted to race this year because he thought he could win it, and his little sister Brooklyn, 3, said she just wanted to keep up with him.

She was one of many parents joining the kids' half-mile run Thursday morning.

“I never thought running on Thanksgiving morning sounded like a good idea, but these guys wanted to do it,” said Matt Keegan with his two boys, 4-year-old Luca and 6-year-old Brooks. “I told them about it and they were excited so they drug me out here.”

With a 3-mile run, 1.5-mile walk and the kids' run available for free, participants donated $2,400 and a barrel full of pantry foods by the end of the races to go toward Home Sweet Home Ministries.

Matt Burgess, CEO of Home Sweet Home, said he was grateful to have those donations come in, since “they’ve been doing it for more years than I can remember, partnering with us.”

Lydia Walk of Bloomington said she brought a few canned items to donate before her run because “Why not give back something when I’m getting to have a turkey Thanksgiving dinner also?” With a laugh she added she was there “mostly to run off the calories, though.”

“It’s actually the first year I’m hosting at my own house so I had to be up early to get everything started,” she said, getting ready for her first 3-mile trot. “So I thought let’s go run off the turkey before I eat it this time.”

While they finished their trots at the park, volunteers lined up at Home Sweet Homes to get their cars loaded with food.

The shelter didn’t deliver food last year because of the pandemic, but this holiday, 406 meals went out to community members in need of a hot meal.

“We’re really excited to be able to bring back meal delivery this year,” said Leslie Bunge, communications coordinator for Home Sweet Home. “Of course it looks a little different but we still wanted to be safe and not have too many people inside the shelter. This is a great way and we’re still able to get those meals out to those in need.”

Home Sweet Home didn’t host an in-person meal, but a bagged lunch was available for anyone who came by the shelter during the day.

Jenny Gentes and her family were among the 150 volunteers who came out to help on Thanksgiving and said it was their sixth year delivering meals, “starting off the day by giving to others.”

“We’re so thankful for what we have, we just want to give back,” she said. “It sets the tone for the whole day.”

Larry and Beth Newton of Bloomington, usually are busy hosting on Thanksgiving, but with a day off, this year they put their free time to good use.

“We wanted to, as two families, put some joy into other people’s lives today. … We know there’s a big need,” Beth Newton said, getting ready to start delivering meals along with their daughter, Joy Marchesano of Normal. “We always supported the mission and we always wanted to do this, so this may be an annual tradition.”

Tradition is important at Home Sweet Home, especially for this holiday.

“We were founded on Thanksgiving Day in 1917 so it’s an important day for us. It’s a day that we show the community how much we care about serving,” Burgess said, noting the meal deliveries have been a key element for at least 30 years.

Meanwhile, at Abundant Life in Christ Church, a non-denominational church in downtown Bloomington, dozens of people came together for a traditional Thanksgiving meal, with food from Hy-Vee donated by a friend of the church.

“The population we serve is the homeless and underserved in our community but also anyone that wants to come. … Everyone’s welcome on Thanksgiving,” said Dee Hisle, a volunteer and event coordinator at Abundant Life.

Hisle, alongside several volunteers, served up turkey, ham, mashed potatoes and gravy, green beans, cranberry sauce, dinner rolls and assortment of desserts — some made by church members plus 60 pies from Hy-Vee.

“There’s so many people that are hungry and they need the nourishment of a good hot meal and my heart goes out to them. … They need help,” said Mary Mohr, the kitchen coordinator who oversees the annual Thanksgiving lunch as well as most meals they serve. “Hopefully what we serve and how we serve it and present it, they know that the Lord also is present.”

Pastor Charles Ahrens said this is the sixth Thanksgiving the church has served the community in this way, though they also offer lunch every week day.

Watch now: In Normal, 2,500 turkey dinners ready for those in need

Earlier this week, a Normal warehouse was filled with volunteers on a big holiday mission: To feed 10,000 people this Thanksgiving season.

While consumers gear up for their holiday shopping sprees, businesses are encouraging people to consider staying local this year.

“It’s not always just about the shopping. It’s about the experience and the event and being in the mall with the holiday decorations. … It’s really the overall experience of Black Friday that I think continues to draw customers back.”

100 years ago: Clean up continues after Thanksgiving dinner at Home Sweet Home Mission

A look at Central Illinois history

The Goodfellow program has grown and evolved several times since 1927, when a newsroom employee delivered firewood to a family in need on Christmas Eve — the recipient calling him “a good fellow.”

Column: Illinois politicians share what they are thankful for in 2021

It is easy to lose sight of all we have to be thankful for.

Bears inside linebacker Roquan Smith out with hamstring injury

As Cairo Santos sent a 28-yard field goal through the uprights as the seconds wound down Thursday afternoon, he saved the Chicago Bears from a…

The McLean County Museum of History writes a weekly feature on the people, places and artifacts that shaped our local history. 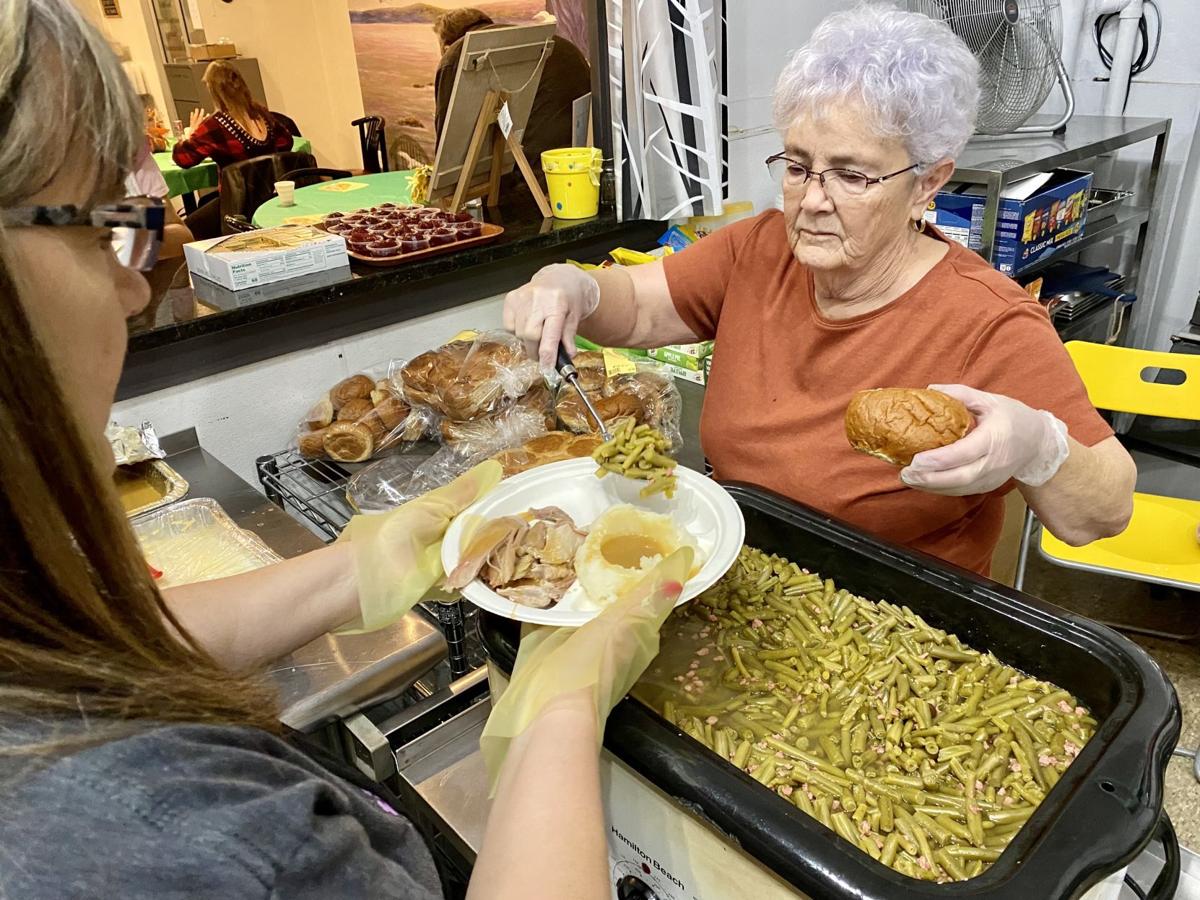 Dee Hisle, left, holds a plate as Mary Mohr adds green beans and a roll to the Thanksgiving meal served Thursday at Abundant Life in Christ Church in Bloomington. 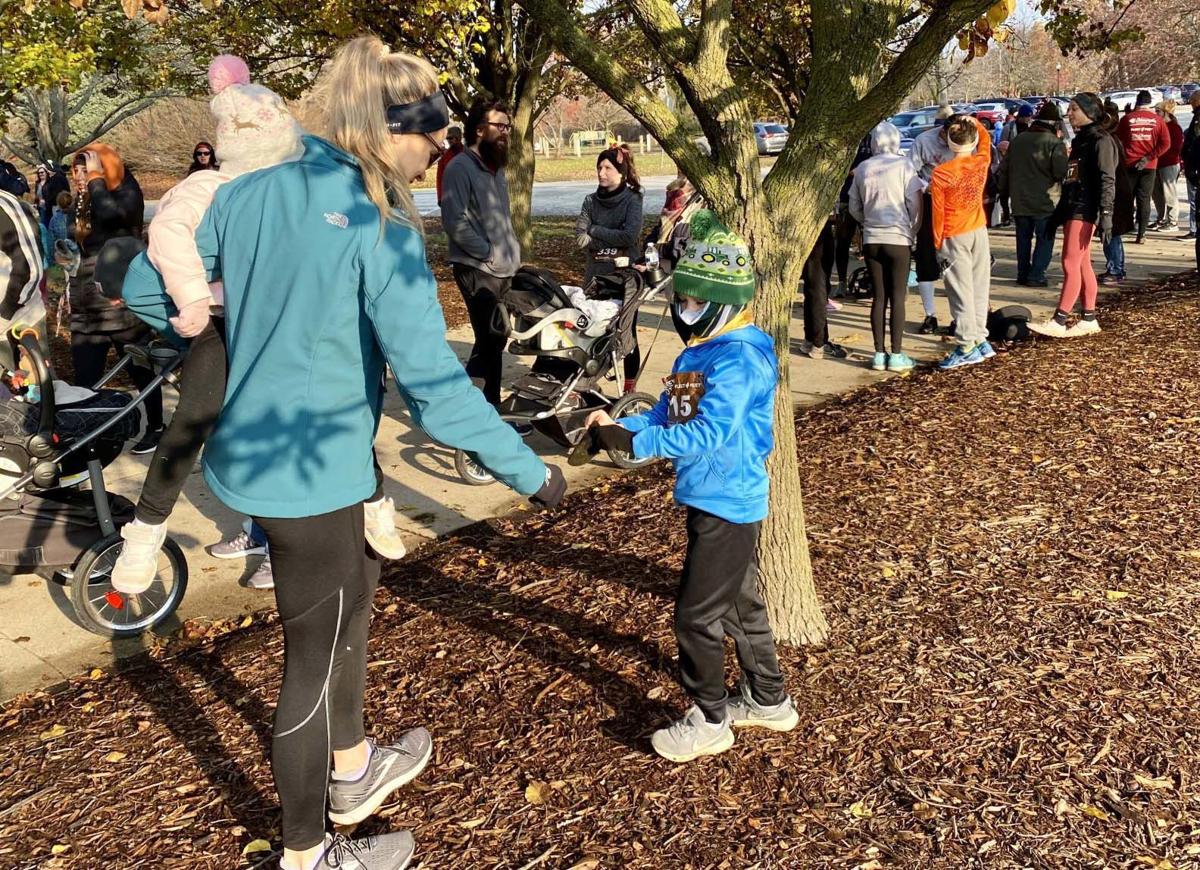 Mallory Benjamin holds her daughter, 3-year-old Brooklyn, as she helps her son, 5-year-old Timmy, put on his mitten before their first Bloomington Turkey Trot on Thanksgiving Day. 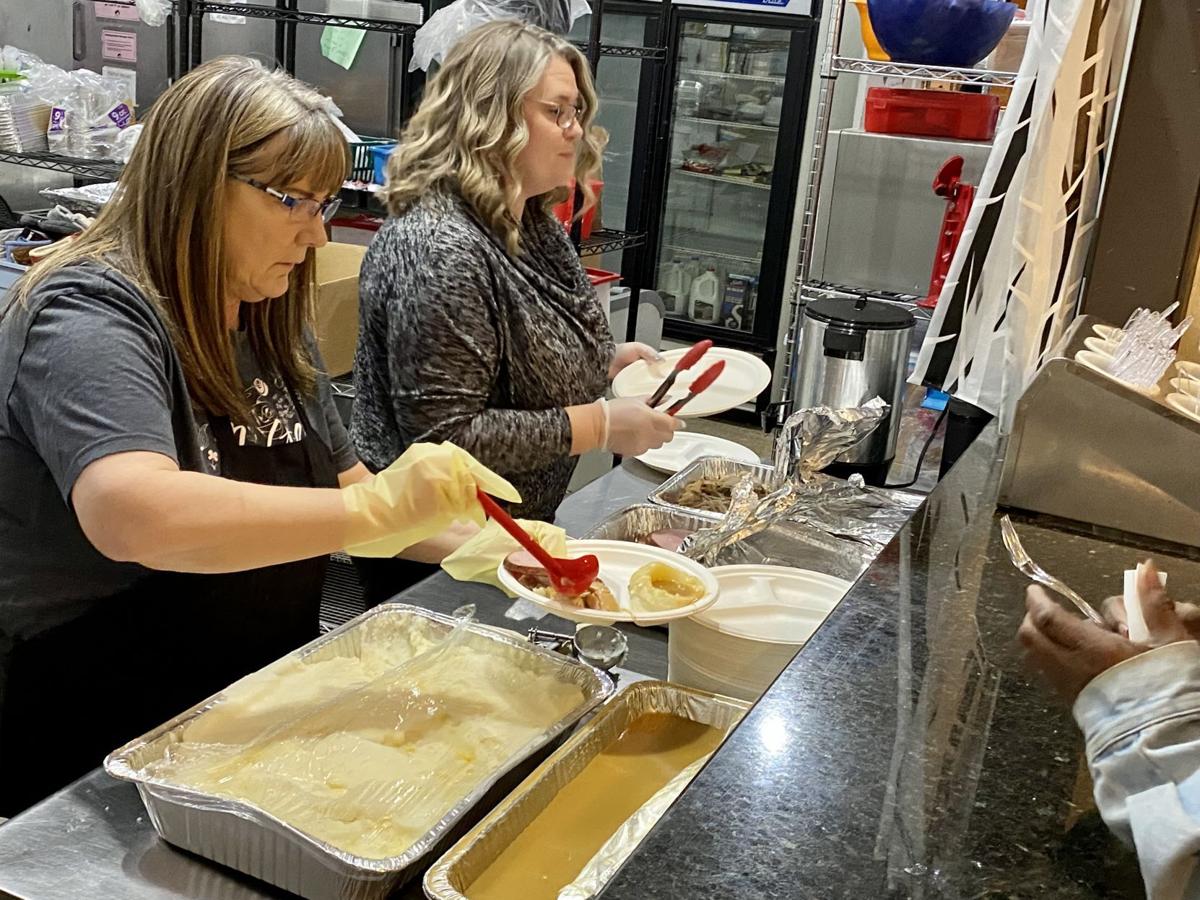 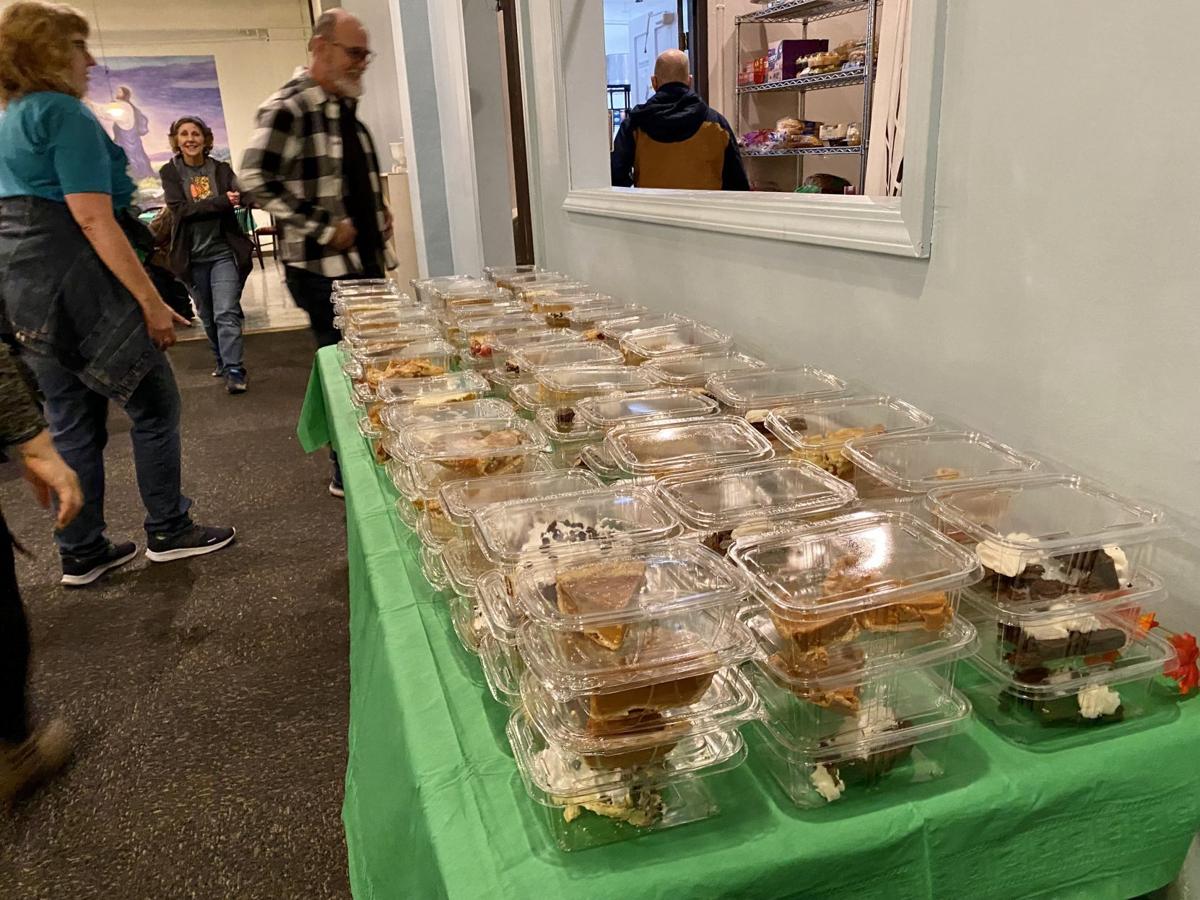 An assortment of desserts was among the offerings available for the Thanksgiving meal served at Abundant Life in Christ Church in downtown Bloomington. 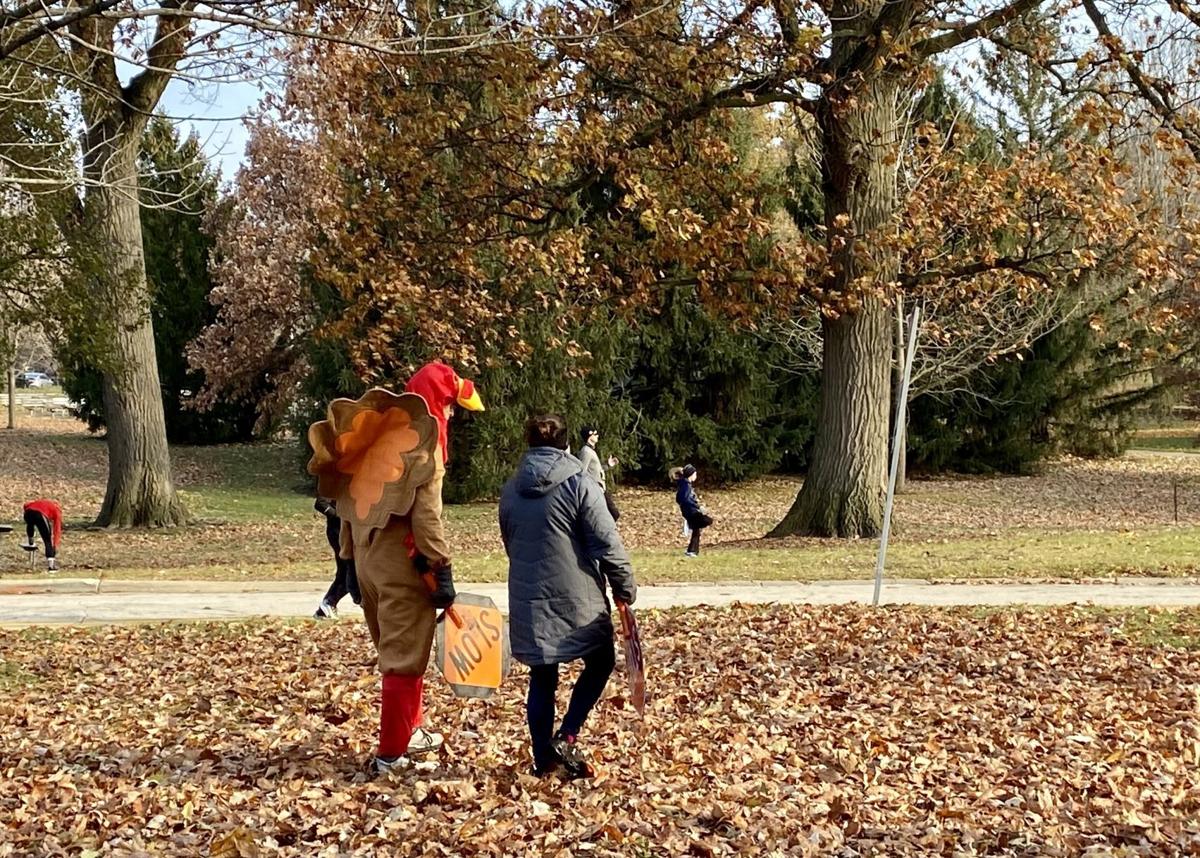 Rich Beal, a volunteer at the Bloomington Turkey Trot, usually runs on Thanksgiving Day but this year he volunteered and dressed accordingly. 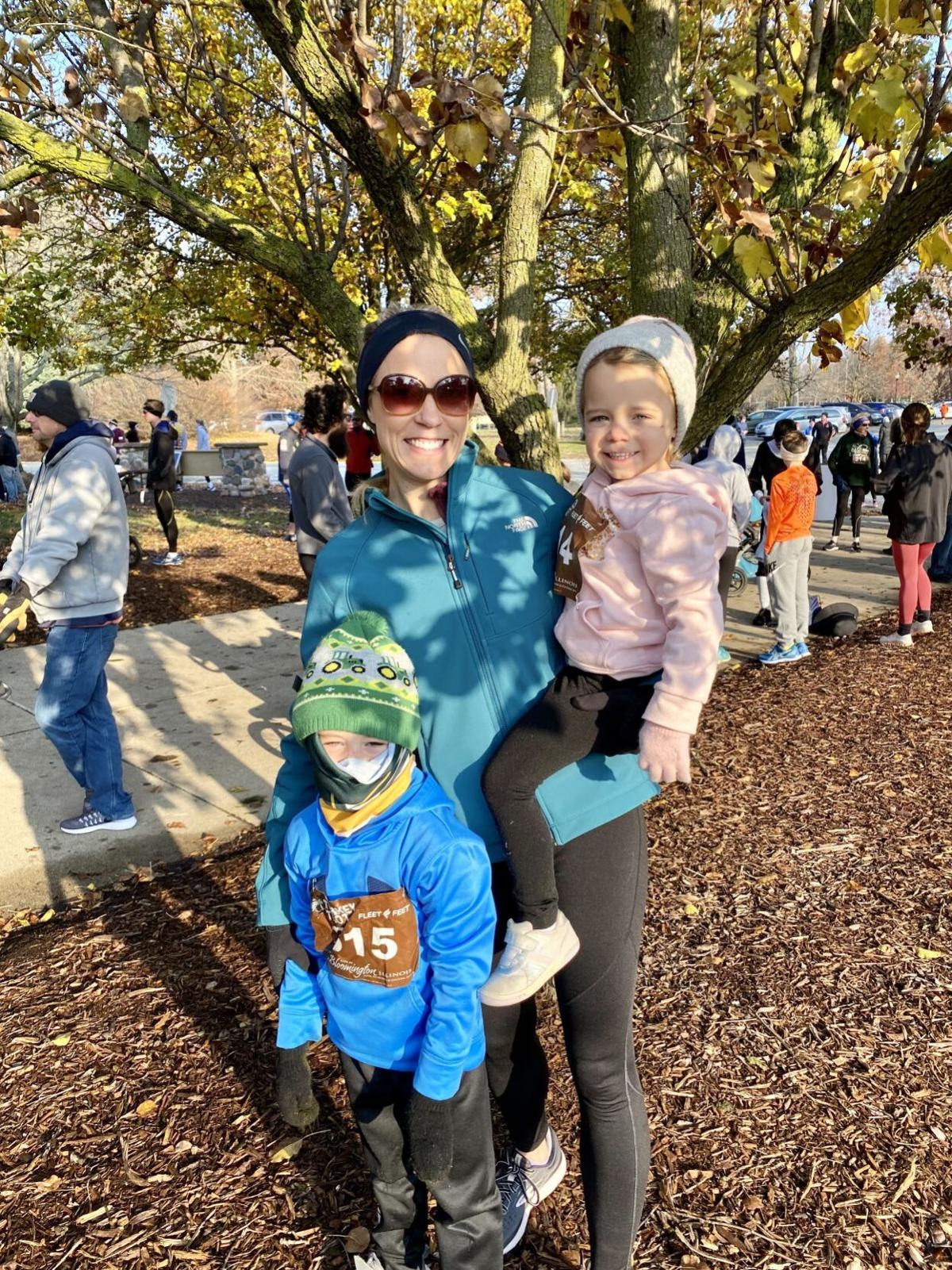 Mallory Benjamin holds her daughter Brooklyn, 3, and poses for a photo with her son Timmy, 5, before the kids half-mile run at the Bloomington Turkey Trot.