BLOOMINGTON — Ronnie Morris didn't set out to live on a vacant concrete slab wedged between a gas station, a hotel and a creek on the city's west side.

But Morris, 40, took to the streets after losing a job, running out of money to pay rent and failing to secure a spot in local shelters operating at reduced capacity because of the coronavirus pandemic, he said.

For the last few months, Morris and at least seven other people experiencing homelessness have occupied the site of a former gas station at 1901 W. Market St. Their encampment, spread across the open lot, features a collection of tents, some furniture and other items.

"Everybody's out here for their own reasons — it's all individual," Morris told The Pantagraph during a recent tour of the site. "I'm not blaming anybody — it's survival of the fittest out here."

Morris said the residents have agreed to a shared set of rules, wherein no illegal drugs are allowed to be brought to or consumed on site.

"In order for us to all stay together there has to be some sort of rule, some sort of organization, things that we can agree to," Morris said. "But anything goes out here and I can't make anybody do anything."

Like Morris and a man named Dennis, most of the residents — all are men, with no women or children present — are longtime locals who lost their employment and subsequently, their housing.

"Because of COVID, the company I was working for ain't got no work now," said Dennis, who said he worked as a concrete finisher and had decades of experience. "That's the only reason I'm out here, man."

Even though the group doesn't have access to clean water or a sanitary place to use the bathroom, members said they don't plan on relocating soon.

Questions surrounding the group's future have intensified recently because of development slated on the 1.5 acres of private property.

On Monday, the Bloomington City Council gave final approval for a Las Vegas developer's plans to build a 2,381-square-foot Panda Express drive-thru and restaurant there.

And while construction likely won't start immediately, the group will eventually need to relocate.

That timeline could accelerate if the property owner complains and requests that law enforcement remove the group, said John Fermon, public information officer for the Bloomington Police Department.

"Yes, lots of people driving by complain about the camp and want them removed; however, being homeless isn't a crime," Fermon said, noting that officers with BPD's neighborhood focus team have visited the site in recent weeks.

BPD Interim Chief Greg Scott in a statement said it is the department's "sincere hope" that "the folks staying there will receive the help they need."

"As a last resort, we will continue trying to contact someone who is willing and legally responsible to sign a ban notice," Scott said. "This option is really not helpful for the homeless, so we will continue to work with PACE, PATH and any other qualified social service agency to find a solution that benefits both the homeless and the community."

Morris and others said they're aware that the restaurant is going to be built, they don't intend to purposely interfere with construction and they plan to leave before crews begin work.

A call for 'human rights'

Nonetheless, Morris said he views the pending development as symbolic of the conundrum he and the others find themselves in.

When the restaurant is built, it could provide the group with jobs. But its construction also means the group will still be without a place to live, so they will need to occupy another space in the city.

Until then, Morris said he and the other residents are calling on the city to support their "human rights."

That request starts with providing a trash can or dumpster for the group to dispose of its trash. As of now, garbage and other debris is scattered across the lot, piled in mounds and stacked near each tent.

"Is Bloomington really not going to help with citizens as far as, you know, the basic essentials?" Morris said. "Even in the public parks you're going to find running water, a toilet and at least a garbage can. These are the basic essentials that the city leaders have a responsibility to take care of."

Fermon said the group was told their trash was an issue and they were permitted to put it in dumpsters at the neighboring Circle K gas station.

As of now, there are no plans to supply the encampment with its own way to dispose of trash.

Other than health concerns that come from garbage lingering near where they sleep, the group is also at risk of violence and harsh weather, said Erik Zdansky, homeless services manager with PATH Crisis Center.

"A visible location like the one they've selected puts them at risk for physical assault," Zdansky said. "You never know who is going to walk up or what their intentions are."

Extreme storms like the ones that blasted the area in late June and recent intense heat waves also pose dangers and challenges for people living outdoors, Zdansky said, adding that encampments typically disappear in the winter, with their residents seeking shelter in an indoor space like a parking garage.

Pitched this spring, the West Market Street encampment is the only active homeless encampment in McLean County, Zdansky said.

It is not a new phenomenon, however.

A handful have appeared in wooded and vacant lots around Bloomington in recent years, with a 14-person camp having been dismantled in mid-2015.

New encampments typically form when individuals refuse to follow rules — like abstaining from drinking alcohol — or get banned from local shelters. Sometimes a person will choose a tent over a bed offered by an organization.

"We've talked with them; so far it's been a pretty positive response," Zdansky said. "We try to gain some rapport with people, but it’s a slow process. We can't immediately solve all their particular issues."

Without housing amid a pandemic

Homeless encampments can also form when local shelters and transitional housing are full or are operating at a reduced capacity.

Both scenarios have been in play for the last year because of mitigations and policies related to the COVID-19 pandemic, Zdansky said. 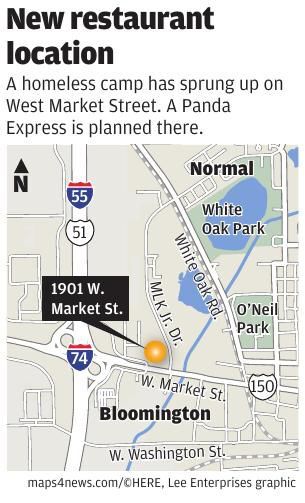 "If they can't get into shelters, people are going to pop up tents if they're able to," he said. "They have to do whatever they can to survive."

Emergency shelters like the ones operated by Home Sweet Home Ministries and The Salvation Army have limited the number of available beds in an effort to reduce the spread of the virus among guests.

"We had to balance which is worse: keeping people on the streets or exposing them to COVID," said Debbie Reese, HSHM director of client services. "It was a very difficult decision."

HSHM offers a total of 70 beds at its emergency shelter at 303 E. Oakland Ave. The organization can house up to 50 adults, and supplies rooms specifically meant to house families, veterans and children.

At the onset of the pandemic, the organization took enough beds out of circulation so that people could sleep 6 feet apart. Now, all 70 beds are back in circulation, Reese said. But they're also all full.

One avenue to create more space in the shelter is to move people into transitional or long-term housing.

Both PATH and HSHM offer access to rapid rehousing programs, wherein people experiencing homelessness receive rental and utility assistance so they can afford to live in low-rent housing.

"Most people experiencing homelessness have been in housing at some point, and something happened," Reese said. "It doesn't take long to get to into homelessness, but it can take long to leave it."

Rapid housing programs often come with a set of expectations from landlords and tenants, which can in turn complicate the move from homelessness to stable housing.

In most cases, Zdansky said, a tenant won't follow guidelines or has a set of challenges preventing them from qualifying for a program. Other times a landlord won't have units available or will flat out refuse a tenant.

But the largest barrier to getting homeless people into stable housing is the lifting of national and state eviction moratoriums.

Both Zdansky and Reese said they're worried about the flood of requests for shelter and rehousing that could hit their organizations at the end of the summer, when Illinois' eviction moratorium is set to expire.

"It’s the unknown that’s bothering us," Reese said. "Not all of the people who are evicted will become homeless. But we just don’t have a clue of how many are going to come to us."

Zdansky said the moratorium's lifting is "going to be a serious, serious problem" that could cause a "housing crisis" across McLean County.

That crisis, Zdansky said, will largely be driven by landlords seeking to reclaim outstanding rent and late fees while also denying low-rent housing to people because of current situations.

Together, this could result in a wave of area homelessness.

PATH's 2021 Point in Time Count — a measure of the number of people in emergency shelter, transitional housing and unsheltered — found there are 188 people experiencing homelessness in McLean County.

Across the 11-county Central Illinois Continuum of Care, there were 408 people experiencing homelessness in 2020, up from 319 people in 2019.

Zdansky said 2021's numbers could show a boost, especially after the eviction moratorium is lifted. And like Morris, he sees the West Market Street encampment as a chance to spotlight homelessness in the Twin Cities.

"That encampment is very visible and most of the homelessness in Bloomington-Normal is very invisible," Zdansky said.

Morris agrees, but doesn't want that to qualify him as separate from other residents here.

Thirty-five new COVID cases bring July's total to 369 as of Friday. By Jun 30, just 121 cases had been confirmed in the entire month.

No labor shortage here. With two women recently giving birth and six others currently pregnant, eight nurses have set a record at OSF St. Joseph Medical Center for the most pregnant staffers on the floor at one time.

Pot and the workplace: Despite being legal, it can get you fired

Illinois legalized recreational marijuana in January 2020. Then the pandemic hit, work from home became the norm and the marijuana industry blossomed.

The cause of the fire is unknown, authorities said. 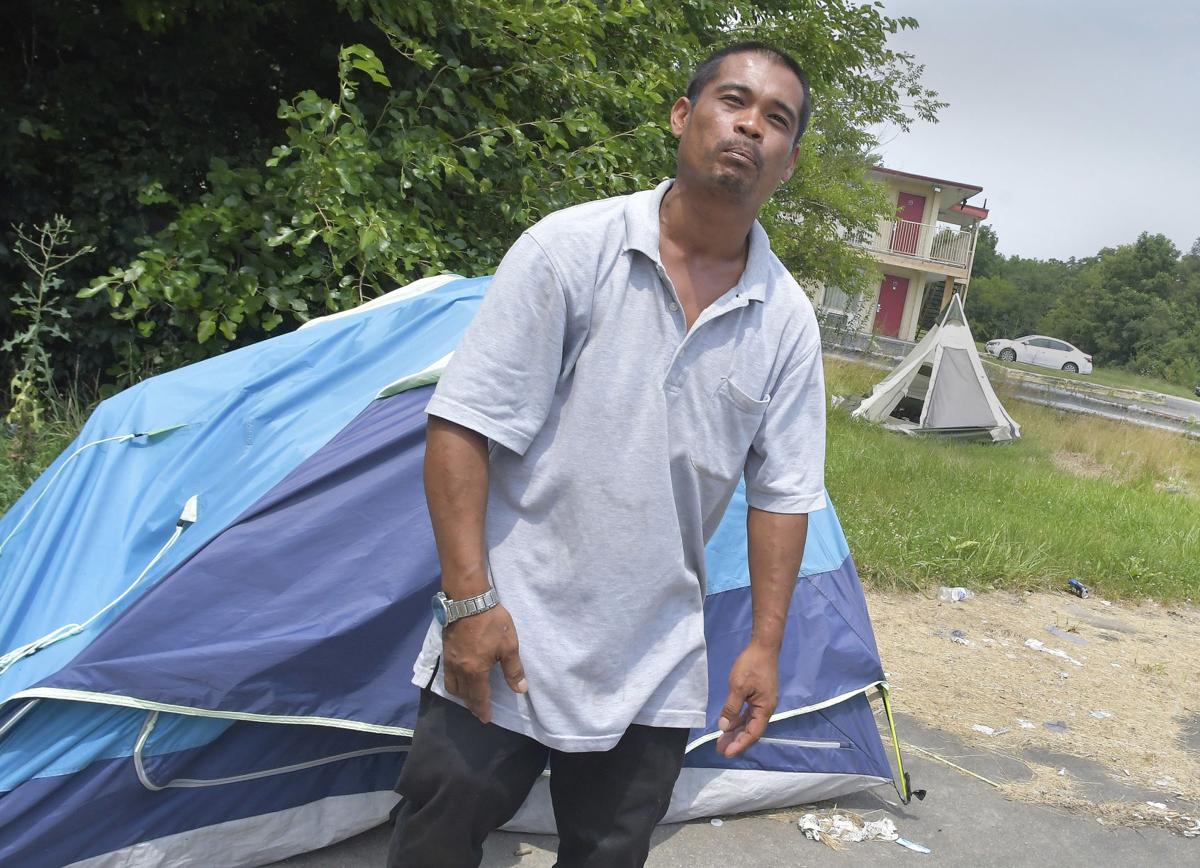 Ronnie Morris of Bloomington stands outside his tent on a vacant lot on West Market Street on Thursday. He is among eight homeless men camping on the lot, which will soon become home to a Panda Express restaurant. 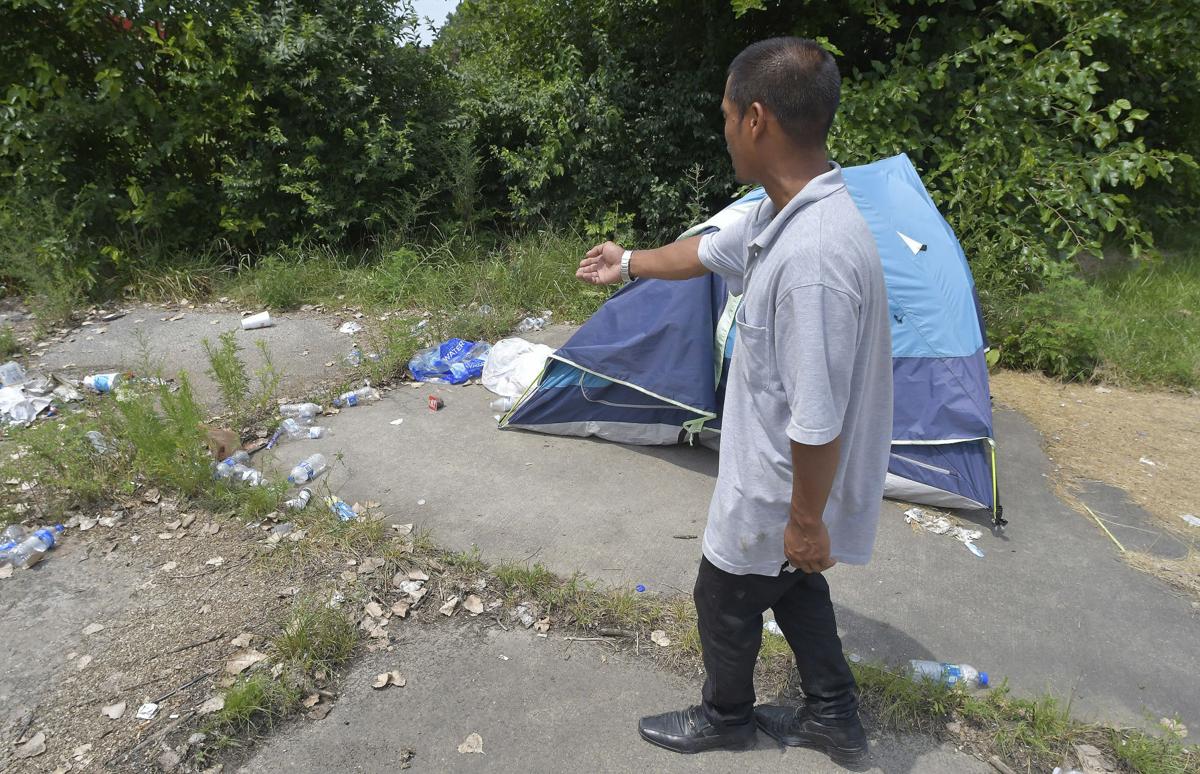 Ronnie Morris of Bloomington points out the accumulation of trash in a vacant lot on West Market Street where he makes his home. Morris said he would like to see the City of Bloomington set a garbage Dumpster on the lot. 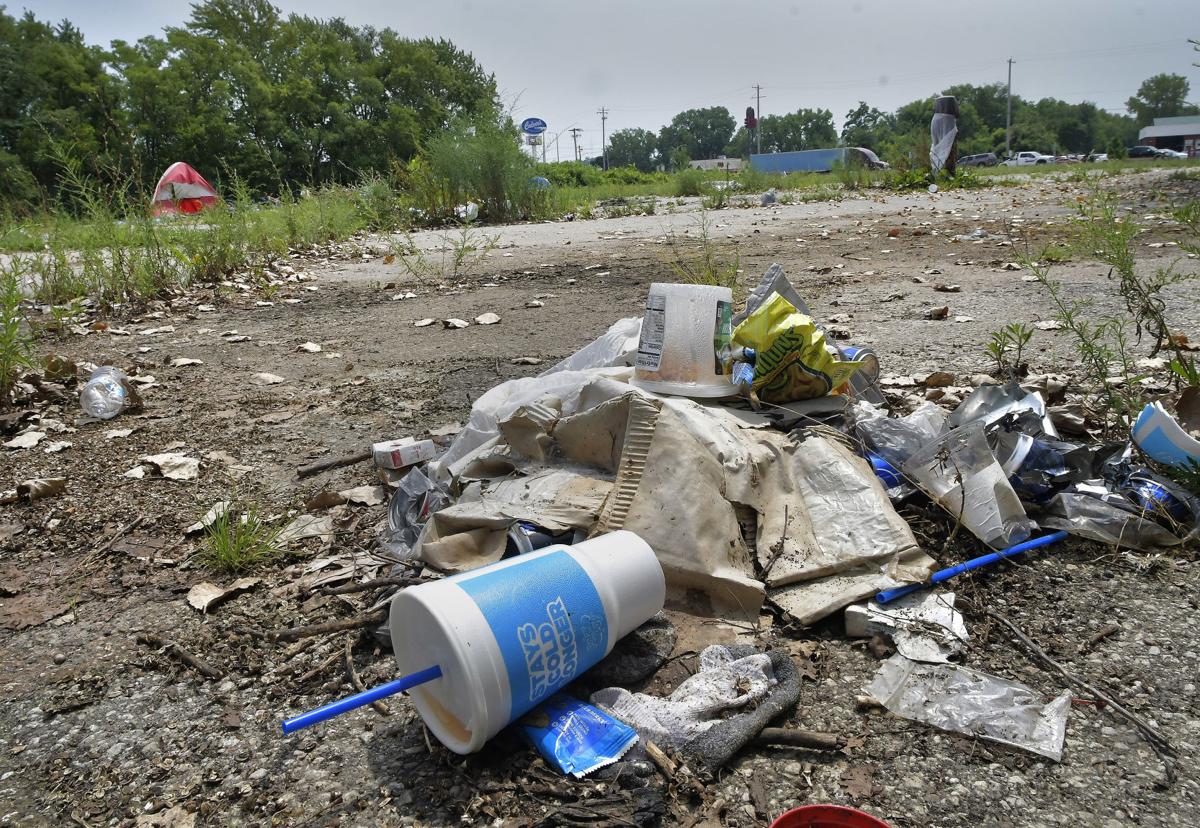 An accumulation of trash and other debris is apparent as a number of homeless men make their home in tents on a vacant lot on West Market Street. 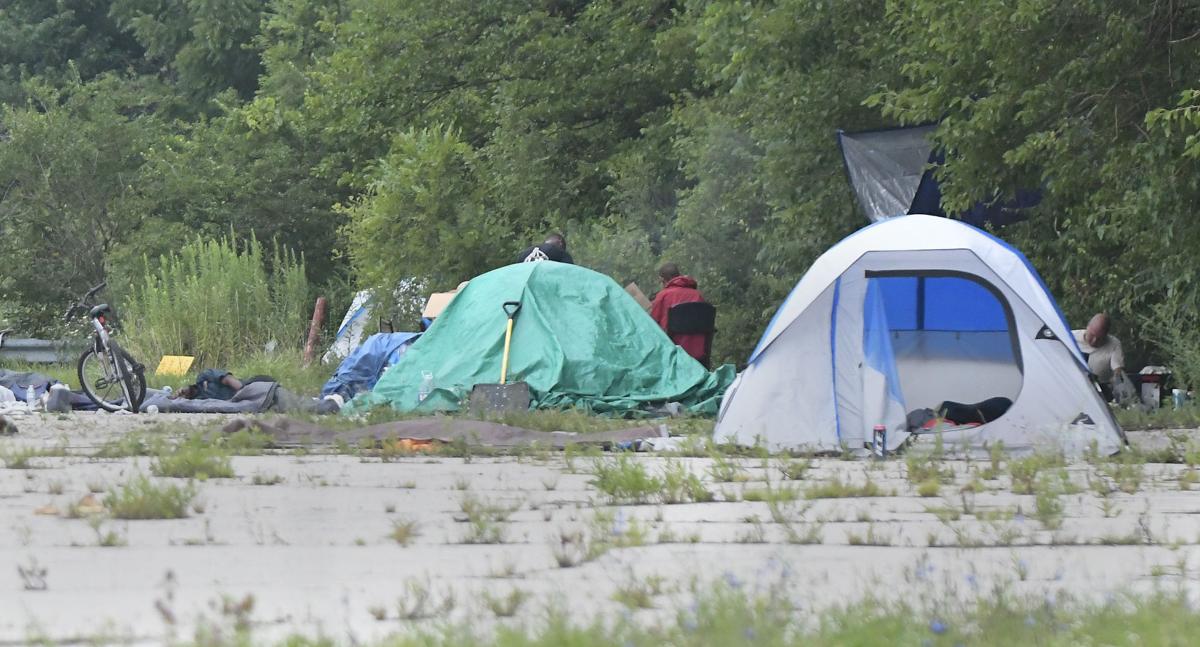 An encampment of homeless men are living in tents on a vacant lot on West Market Street in Bloomington. One of the men said the small tent city is occupied with individuals fighting addictions. 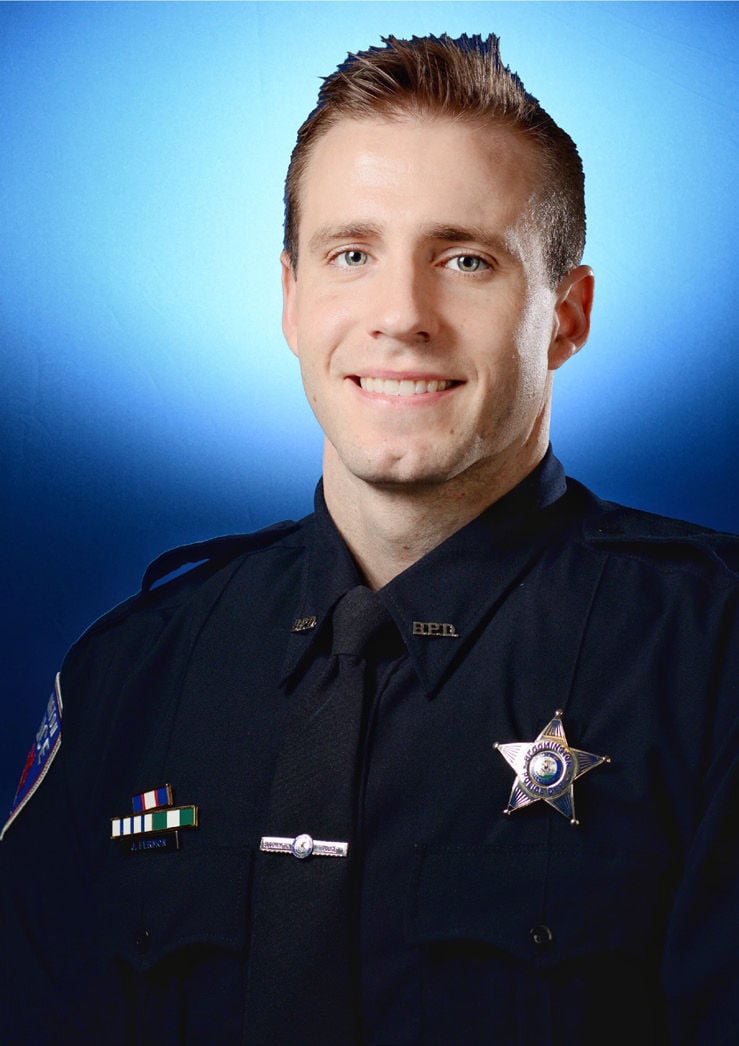 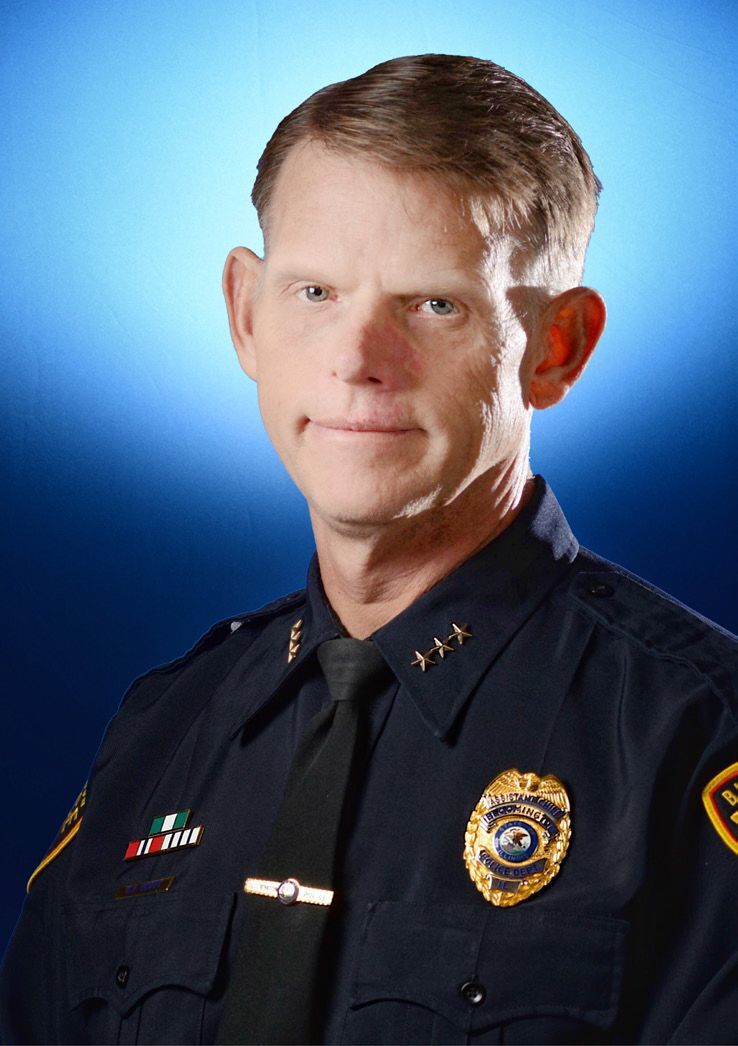 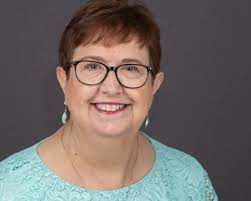 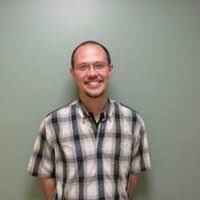