The scanner silence means citizens can no longer passively listen to what may be happening in their neighborhood or monitor what public officials are doing to meet the goals of protecting the community. But open police airwaves also give an advantage to some who might want to break the law.

Moving to encrypted radios was needed for police officer safety and to protect victims and personal information, local police said. But that comes at the cost of transparency and relationship building, said Mike Rossler, an assistant professor in the Department of Criminal Justice Sciences at Illinois State University.

John Fermon, Bloomington Police Department public information officer, said switching to encrypted scanners “had been in progress for years” for Bloomington police before the department shifted in April 2020.

“When it’s monitored, I can tell you from personal experience, when I was on patrol and I went to a domestic incident I heard my radio traffic inside somebody’s house, so it’s one of those that officer safety is a huge thing,” Fermon said. ”I mean, we have burglars that will listen to the radio scanner, and when they hear us they can listen to everything that we do.”

Fermon said the department has no plans to decrypt their radios or allow access for certain people, such as media members.

McLean County Sheriff Jon Sandage, who is retiring at the end of next year, said the same for his department.

“Police communications are exactly that — for police — so I don’t see any instance that would cause us to go back where the public could monitor,” Sandage said.

Fermon said scanner talk includes too much personal information for the public to hear, such as victims' names, phone numbers and addresses.

“There’s no reason, really, for people to know exactly what we’re doing every second of the day,” Fermon said, adding exceptions for serious emergencies like an active shooter, but he said police would send out emails in those cases.

Police departments across the country have been moving to encrypted radios since last year, according to the Reporters Committee for Freedom of the Press, an advocacy group for First Amendment issues.

Many departments offer exceptions for news media who get a “decryption license” and buy a listen-only radio so they can stay ahead of the news. But radios can be expensive and, in Denver, for example, such a license costs $4,000 and is subject to expensive and extensive insurance requirements, according to The Reporters Committee.

Many of those changes came after the mass protest and looting in response to George Floyd’s death May 25, 2020, at the hands of Minneapolis police officers. Some police radios, like in Chicago, were hacked by people during the unrest.

Local police said they did not experience hackers during that time and rarely have in the past.

Normal Police Chief Rick Bleichner said the looting was “probably the biggest reason that really drove it home for us,” why the department went fully encrypted last July.

He said “it was very obvious” that looters in Normal were using scanner apps to circumvent police operations.

The following night that also experienced looting, Normal police used only encrypted channels for certain planning, which “provided us quite a bit of security and ability” to carry out plans.

Some states and cities have enacted hybrid models for police radios that only give media access or allow cops to use encrypted channels rather than be fully encrypted.

But Fermon said using certain encrypted channels is “really confusing” because you have to communicate with officers to make sure they’re on the same channel.

Bleichner said it would be difficult to manage because once one media outlet is allowed access, “where does it stop?”

“What is media?” Bleichner said. “Is that somebody who does a podcast and now they apply (for scanner access) and want to do that? Is it somebody who just does blogging?”

Fermon said police would have to trust that media members are not, for example, friends with someone who committed a crime or perhaps a burglar themselves.

Decatur police Chief Jim Getz told the Herald & Review earlier this year that the news organizations will have listen-only access.

“I think some in the media believed we were trying to withhold or hide things from them, but I have no problem with the media knowing where we are at so they can do their job,” Getz added.

Rossler said the public could benefit from hearing police radios, especially at a time when police agencies across the U.S. have promised to build closer relationships with its communities after being scrutinized following Floyd’s death.

“I can’t see any way that this (encrypted radios) is a relationship-building tool. That’s not 'doors open, come on in.' That’s 'don’t listen to anything we have to say,' and of course, the concerns that police raise are legitimate,” Rossler said, acknowledging there are other ways to build relationships with police.

But he said historically for about “80 years,” when police receive outside scrutiny, there has been a trend “to turn back in and kind of become isolated.”

He said unrest in the U.S. has historically been a result of people pushing back against treatment by the police. Over the past seven years, he said, scrutiny against police has become a larger-scale issue.

“There’s some temptation to turn away from the public and kind of deny information to them because if you’re experiencing a lot of criticism publicly, there’s ways to do that, you can reform your organization and change your behavior or you can make it harder to detect,” Rossler said.

Defendant in court for a pretrial "discussion" hearing; new hearing set for Sept. 30

BLOOMINGTON — A Normal man has been charged with sexually assaulting a minor and possessing more than 130 images or videos of child pornography.

A former technology coordinator for Blue Ridge schools has been sentenced to 30 months in federal prison for defrauding the district of $336,276 over two years.

Two $10 gas station stops used to get Lisa Johnson through the week, but recently gasoline prices in Central Illinois have kept her coming back to refuel.

Police say Jarrod RK Richmond broke in and stole ice cream. He was arrested over the weekend.

BLOOMINGTON — A Normal man was released from custody Monday on pending drug charges.

Each week The Pantagraph profiles a different community member. Know someone we should talk to? Email kheather@pantagraph.com. 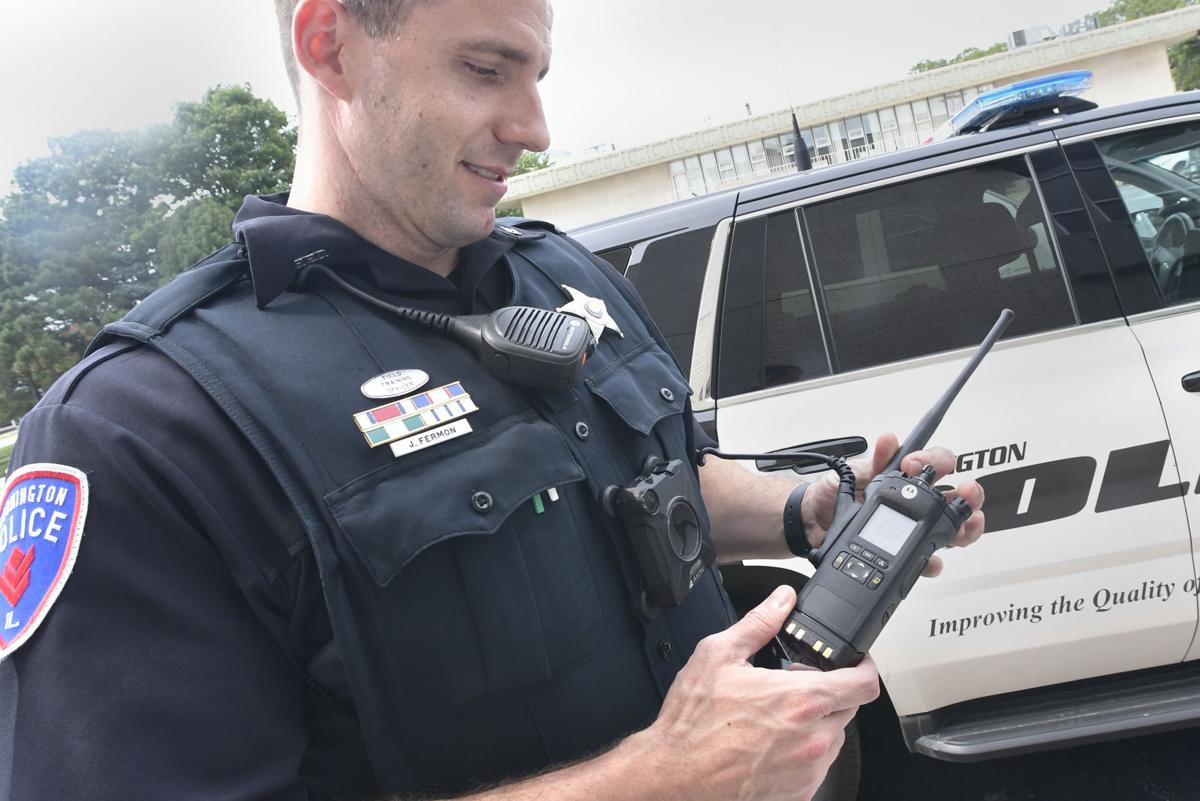 Bloomington Police officer John Fermon uses one of the department's handheld encrypted radios. The radio allows officers to talk to dispatchers and other officers who send encrypted messages that cannot be understood using legal means. 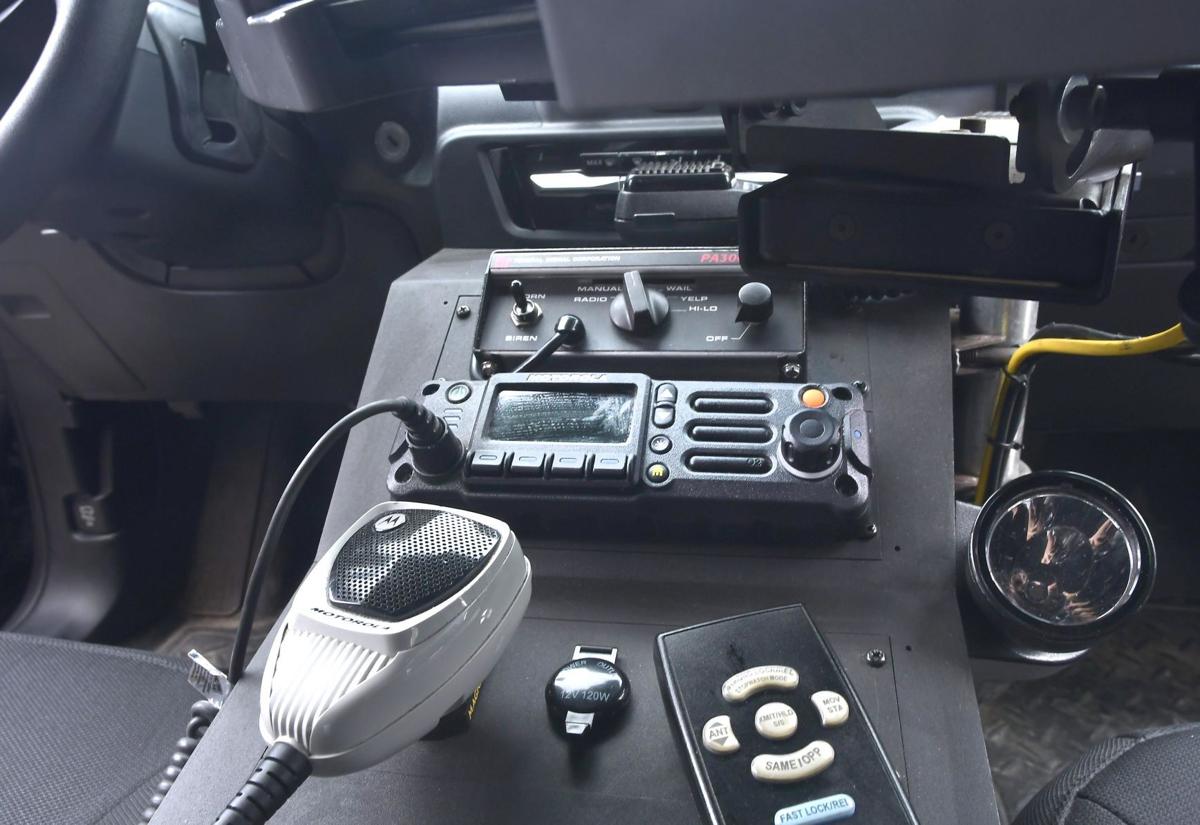 A Motorola Starcom 21 radio sits in the center of a cluster of equipment inside a McLean County Sheriffs vehicle. The radio allows local departments to communicate with each other through an encrypted channel. 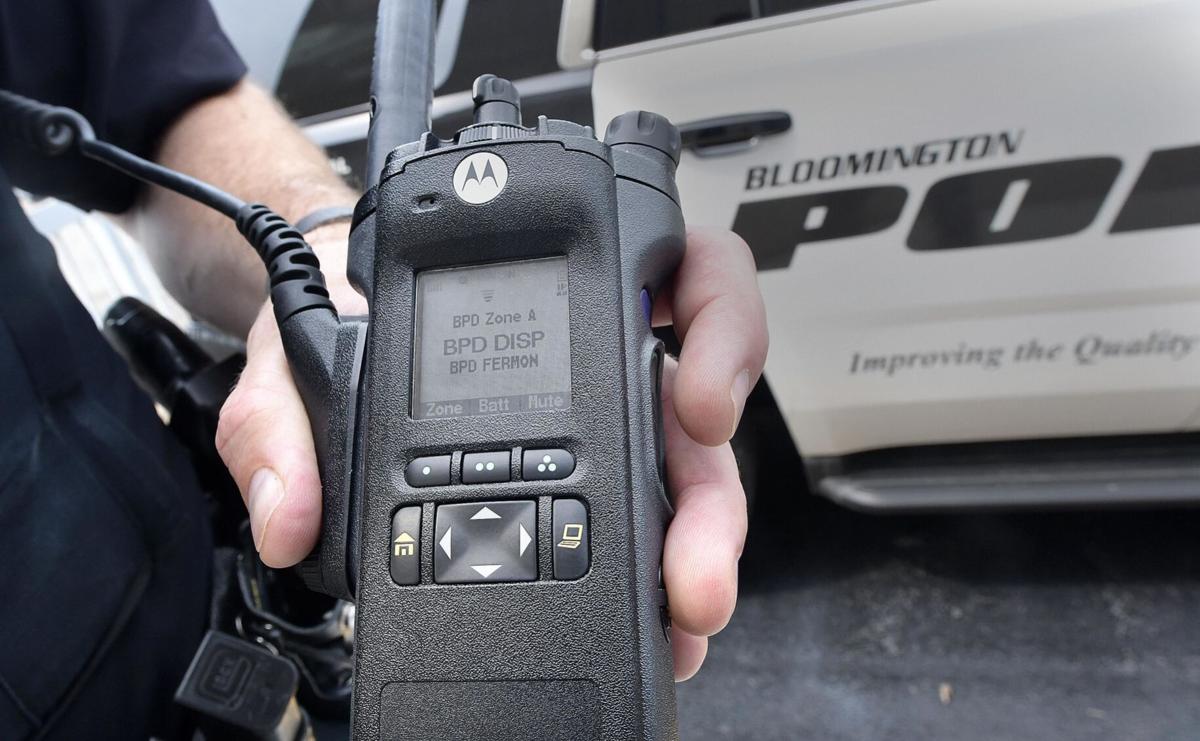 An encrypted handheld radio allows Bloomington police officers to talk without public knowledge of the conversation. 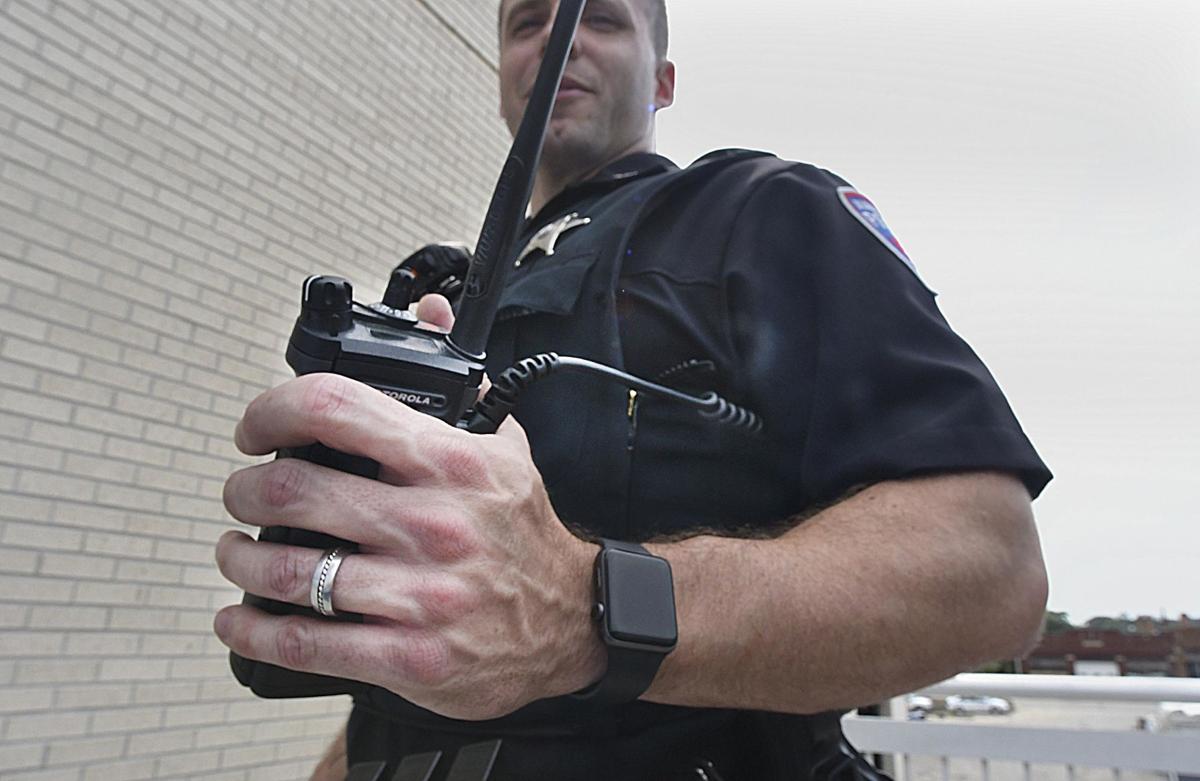 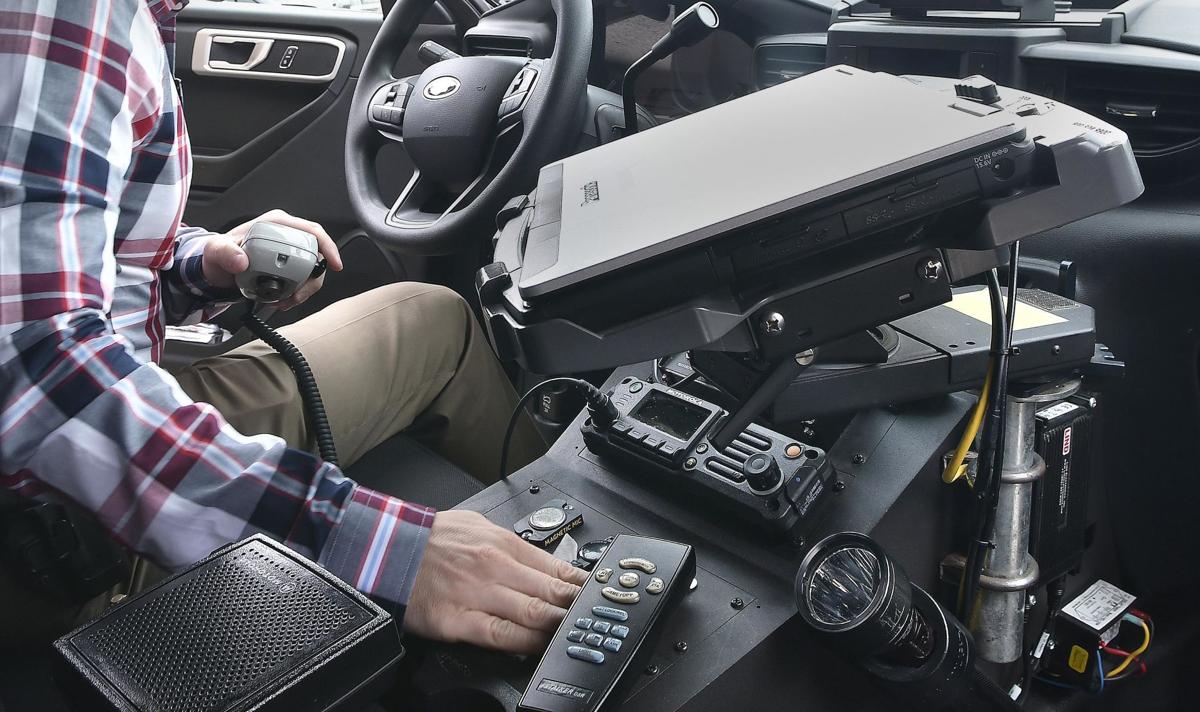 An encrypted mobile radio is positioned inside a McLean County Sheriff's SUV, below a networked laptop. The radio allows police departments to talk to each other in times of community wide police emergencies. 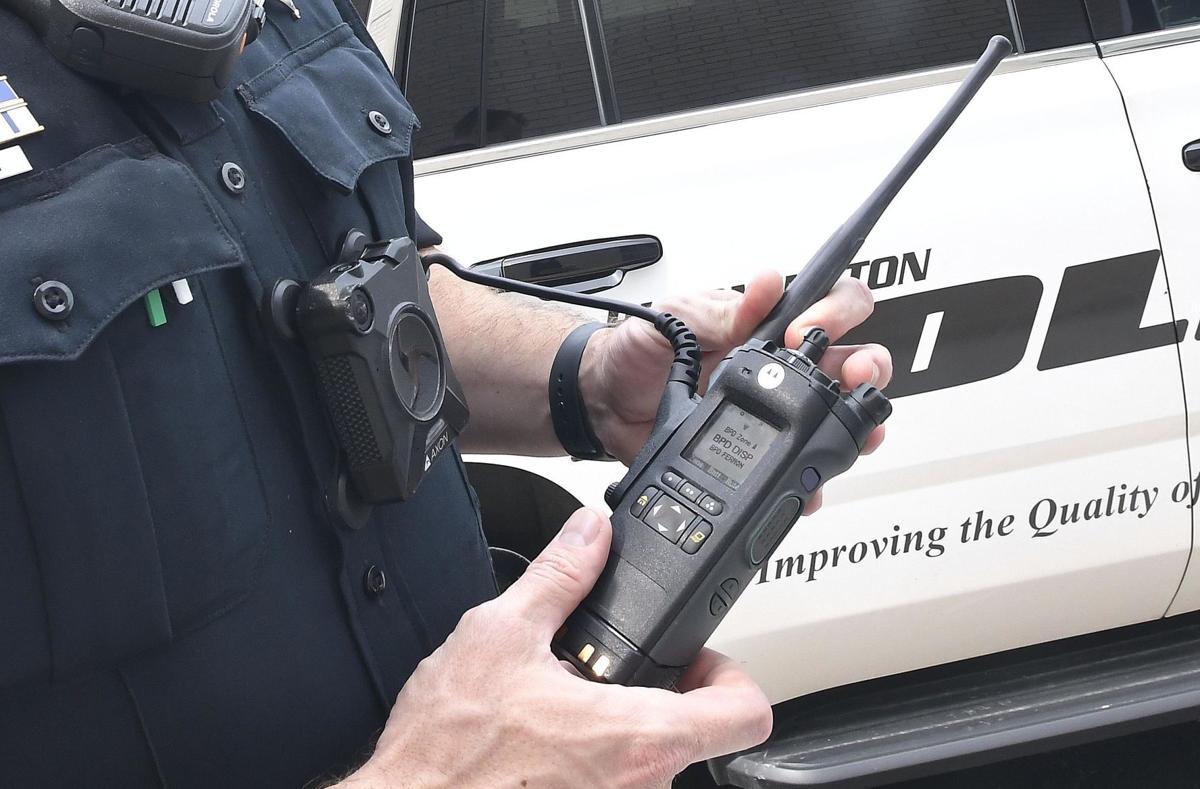 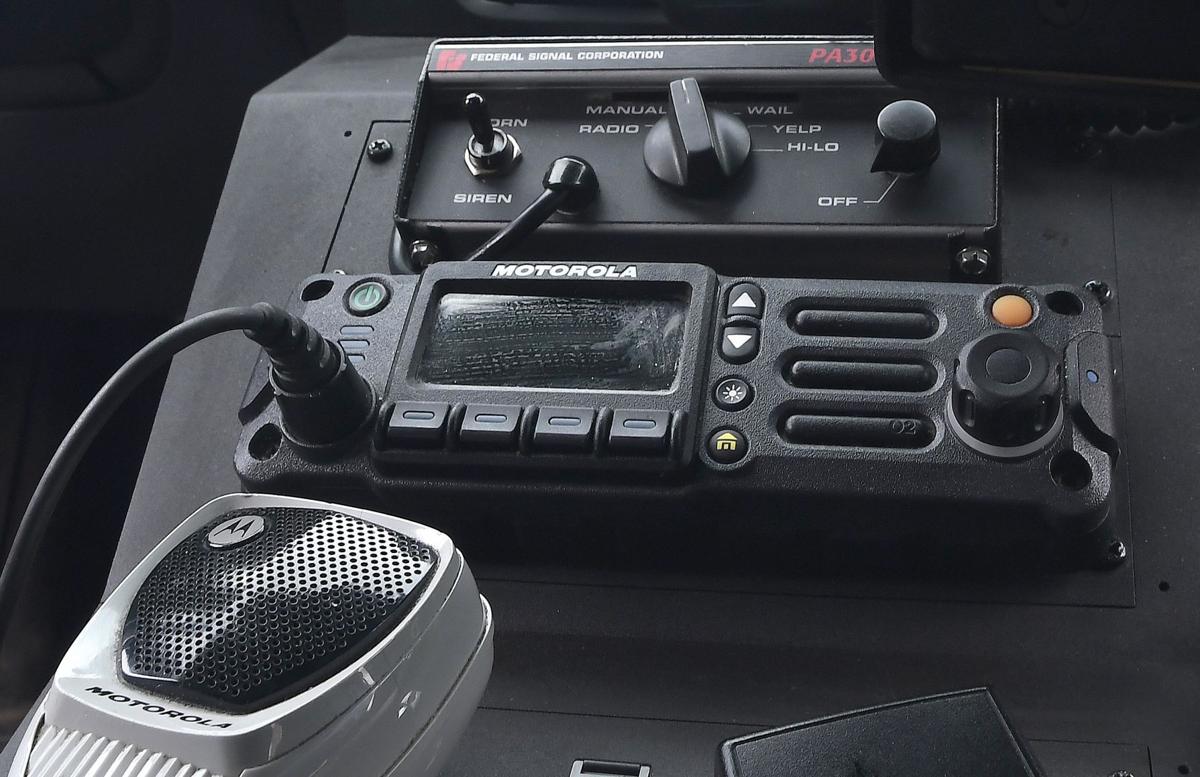 An encrypted mobile radio is positioned inside a McLean County Sheriff's Department SUV on July 15. 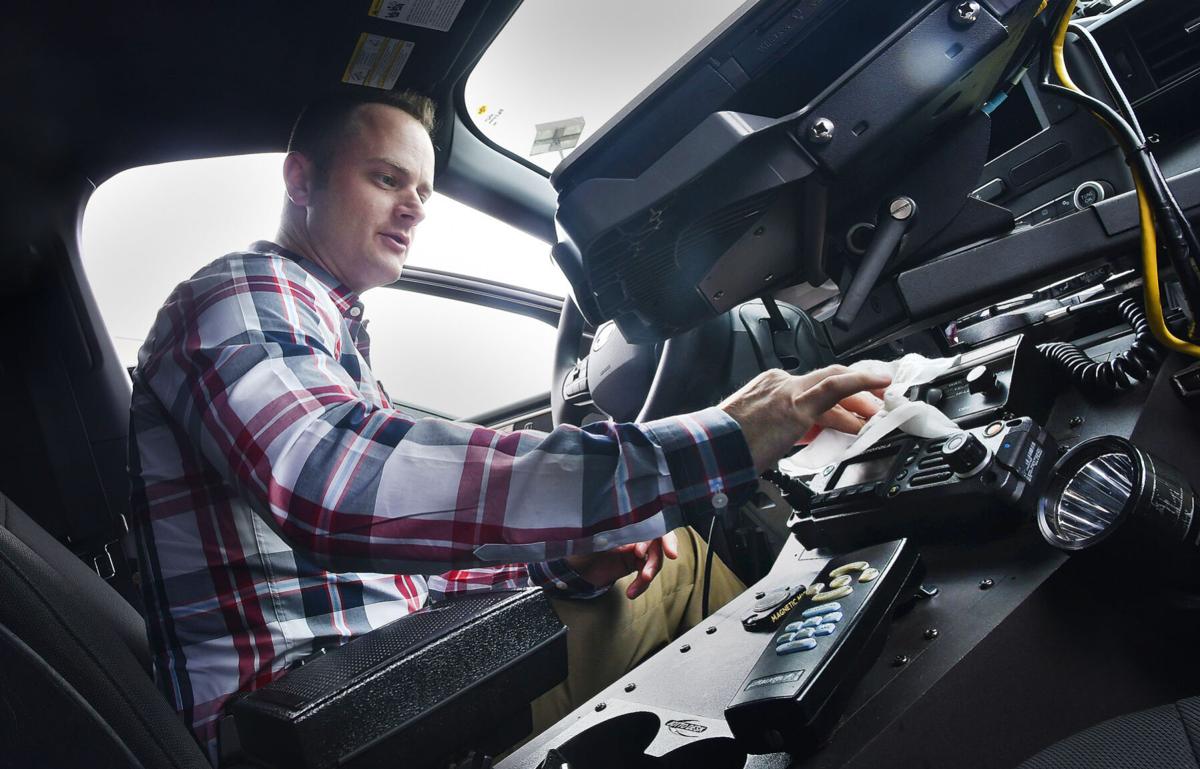 McLean County Sheriff's Department's Lt. Jon Albee disinfects the encrypted mobile radio inside a department SUV on July 15. The radio allows police departments in the Twin Cities to talk to each other in times of community-wide police emergencies. All departments in the Twin Cities went to encrypted dispatch last year in an effort to improve officer safety and operational security. The problem with the encryption is that it prevents news agencies and interested members of the public from following basic dispatch information. 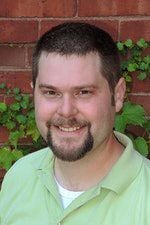