Rams vs. Buccaneers: Updates and scores from the NFL playoffs

Officials and community partners from all across the county each play a role in the plan, from McLean to Chenoa, and LeRoy to Carlock. That includes local police agencies, trained "spotters" who report severe weather observations, search and rescue volunteers, and more.

These spotters relay their reports to emergency officials who make the call for when to sound off the storm sirens, EMA Acting Director Cathy Beck said. She added communities can always use more spotters.

But back at their home base in Bloomington, it's the county EMA that makes that call for the Twin Cities.

Beck said they meet with first responders or partners to work on plans and improvements to emergency responses. They also plan training exercises, and ensure their partners get an invite.

“It is best practice to work with agencies on training so the first time you meet isn’t during an emergency response,” Beck said.

Beck also regularly attends training events and exercises with these local partners. For example, earlier this month she was at Bloomington Fire Station No. 2 on Hamilton Road, when firefighters practiced preventing propane tank explosions.

She added that they're working on a countywide plan to mitigate the effects of natural and manmade hazards.

"Every community within the county is working with us on this process," she said.

In February, the agency came to assist when 16 cars on a Union Pacific train derailed in uptown Normal. Then, it aided with logistics for COVID vaccine clinics at the Grossinger Motors Arena. Beck said they’re continuing to help ongoing clinics in rural parts of the county.

When the county experienced severe flooding in June, she said they “lived for 14 hours per day” in the department’s meeting room. It was there they coordinated damage assessment teams, met with the Small Business Administration and kept tabs on hard-hit areas.

Beck said it’s unusual for EMA to work directly with McLean County residents. Rather, she explains their work to folks by telling them to think of FEMA, but on the county level.

“We’re responsible for planning for and responding to events that are larger than a community can manage on their own, or emergencies that affect more than one community,” she said.

“The June flooding is an example of where we did work with the residents directly with the damage assessments, answering phone calls, and planning the Multi-Agency Resource Center.”

Additionally, part of her job includes telling people what forms of assistance they’ll get after an emergency, all while knowing that “not everyone is going to be happy.”

The Pantagraph reported Oct. 5 that a demand for $310,000 in compensation for flood damages incurred by 10 Bloomington residents was denied, after City of Bloomington legal counsel cited the Tort Immunity Act. Over 500 claims sent to the city’s insurer were ultimately denied.

In late September, the Bloomington City Council narrowly passed a plan to direct city staff to look to existing state and nonprofit assistance programs to fund financial aid to residents.

In August, $808,400 had been loaned out to McLean County flooding victims.

One lesson the county EMA took home after the floodwaters dried up was that they can use more damage assessment volunteers. Beck described much of the June flooding in McLean County as "invisible," because the water could only have been seen inside the homes.

"It's harder to get volunteers to help because they don't see that there's an issue," she said. "If their home wasn't affected, they didn't know."

Although McLean County faced difficulties getting volunteers, Beck said over in Ford County, they had 70 volunteers per day to show up for damage assessment after flooding in August.

"Their assessment was done in two days," she said.

Two weeks had passed by the time all four damage assessments were completed for McLean County, according to Beck.

Scott Watson is director of Carlock's Emergency Services Disaster Agency. For him, that means he's responsible for observing and reporting any severe weather that comes through his area.

He said everybody is suffering from lack of volunteers, from volunteer fire protection districts to McLean County's severe weather spotting teams. He's worried that people are becoming complacent and assume someone else will take care of it.

He said McLean County gets tornado watches all the time, and although they may not produce anything, occasionally a "tornado watch turns into a tornado warning."

"You just never know what's coming, what's going to hit you, or what's going to go around you," Watson said. "You're not always going to know the track of the storms. You can look at the radar, but that's not going to tell you everything."

Watson encourages county residents to contact their town or village and ask how they can become a weather spotter or fill another volunteer need.

He said McLean County hosts spotting classes that are open to the public, and he retakes the course every two years.

Beck said the National Weather Service offers weather spotting classes in the spring, and people can contact her office or follow McLean County EMA on Facebook for how to get involved.

On several occasions this year, Beck said they responded with their Ground and K9 Search & Rescue Teams to find missing persons or search for evidence, as part of the Illinois Search and Rescue Council.

When missing Illinois State University graduate student Jelani Day was identified as the body recovered by the Council from the Illinois River in Peru, Bloomington Police Spokesman John Fermon said he was impressed by their work.

"As law enforcement, you think you’ve seen it and heard it all," he said. "It's impressive how they track it and how they organize it. We’re lucky to have those resources.“

Watson joined McLean County's search and rescue team in 2016. He said it gives people a different aspect on how to look for things.

"You can overlook something, but we teach you have to turn around and re-look," Watson said.

As a lover of the outdoors, he drew comparisons with hunting.

"If you shot something but if it ran off, how are you going to find it," Watson asked. "You have to track that blood system down the road.

"Through whatever brush you come into contact with, you have to look for the tiniest drop of blood."

While on a cold case, he said they might search for bone fragments, which can include a finger, rib bone or femur, or they might find a full skeleton.

"You just never know what you're going to come across out there," Watson said.

McLean EMA supports first responders in several other ways. Beck said they assist police by deploying their mobile operations center at developing crime scenes, like the Aug. 30 shooting at a trailer park in Normal.

Just having an air-conditioned space available for police investigators to take a break in or print their reports makes a big difference, according to Beck.

The acting director said she’s constantly learning in the emergency management field — and change is the only constant.

“Everything is your planning and exercising and training,” she said.

The narrow vote came after separate votes that killed two other options. One would have authorized $250,000 in supplemental city funds for direct payments. The other would have committed no extra city funds.

More than a month after the June 25 and June 26 extreme weather events, nearly all of the more than 500 Bloomington residents who experienced and reported losses have yet to be compensated for them.

Officers say the man also had two active warrants for his arrest.

The recent opening of an Illinois Wesleyan University time capsule drew attention to some of the history preserved in area buildings. There is still plenty left to unearth though, with at least 19 time capsules still in place between Wesleyan and Illinois State University.

The purpose of the meeting was to review projects that would prevent injury, death and property damage from possible natural and human-caused disasters. 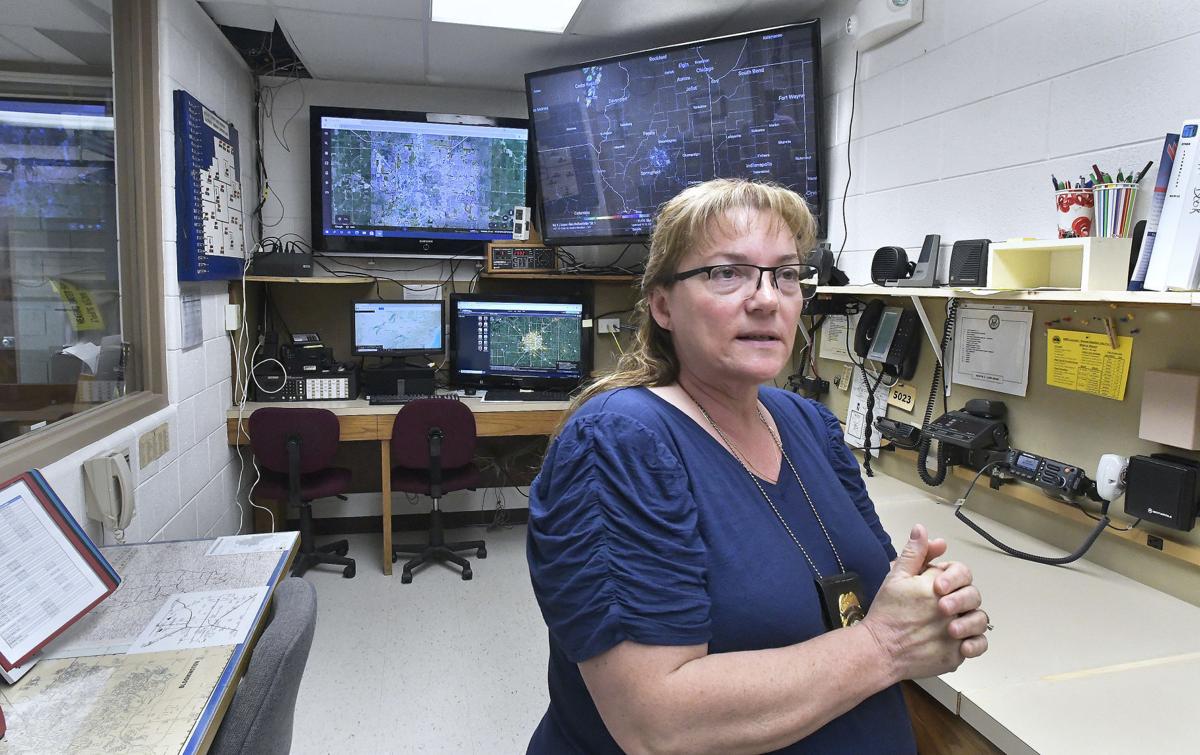 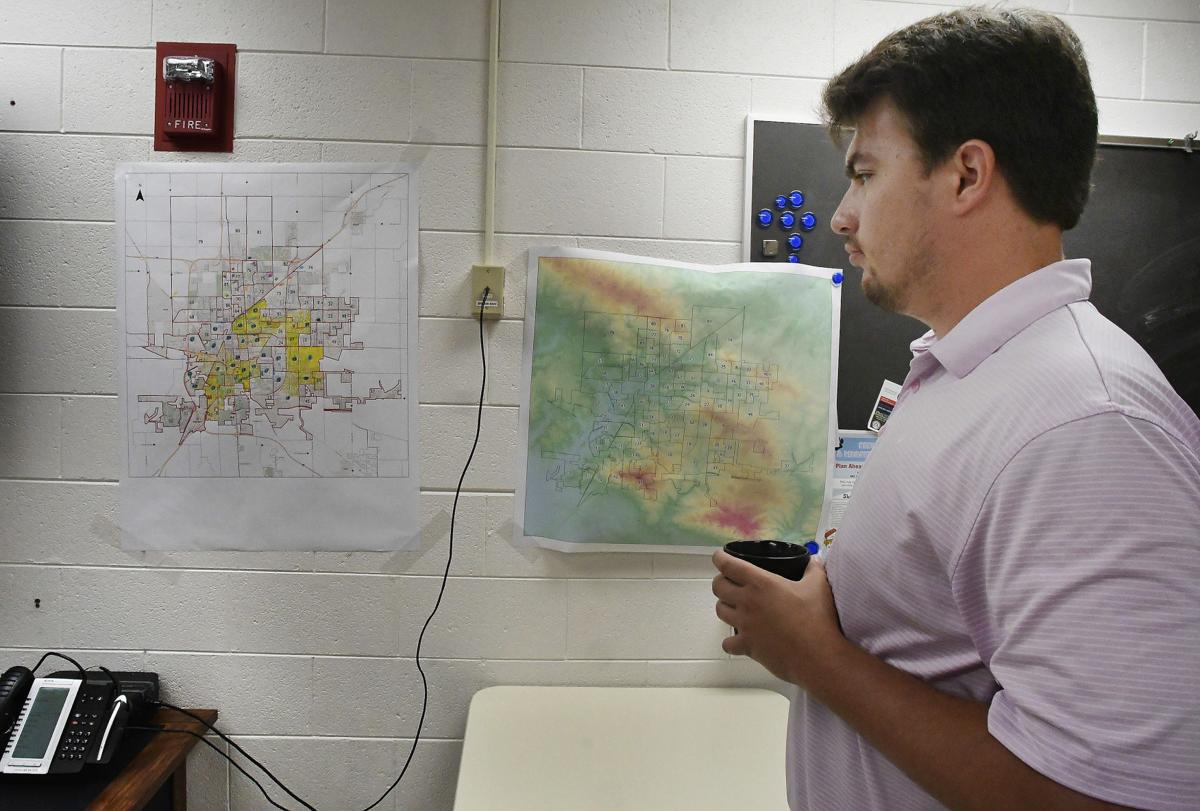 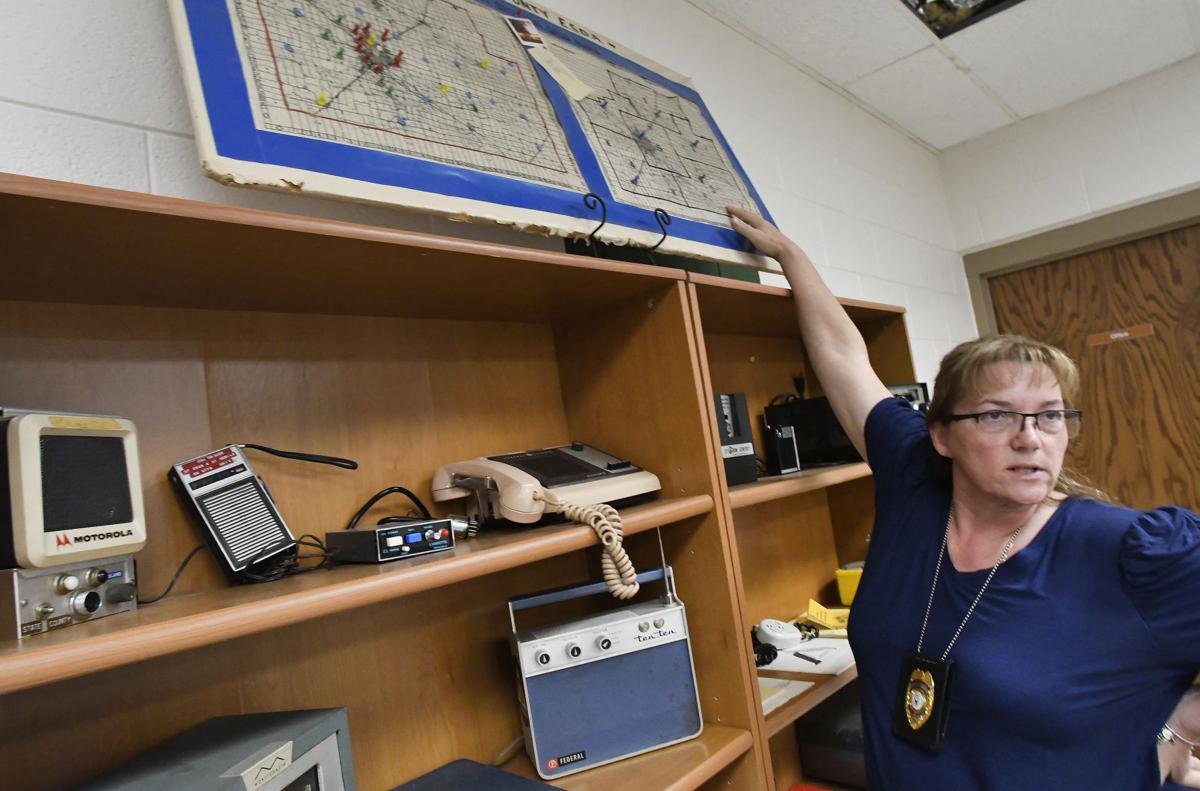 Cathy Beck, acting director of the Mclean County Emergency Management Agency, looks at maps that locate weather spotters across McLean County while working in the EMA command center in the Law and Justice Center, Friday, Sept. 17. The shelf below displays some historic radios and Geiger counters that were used in the past. 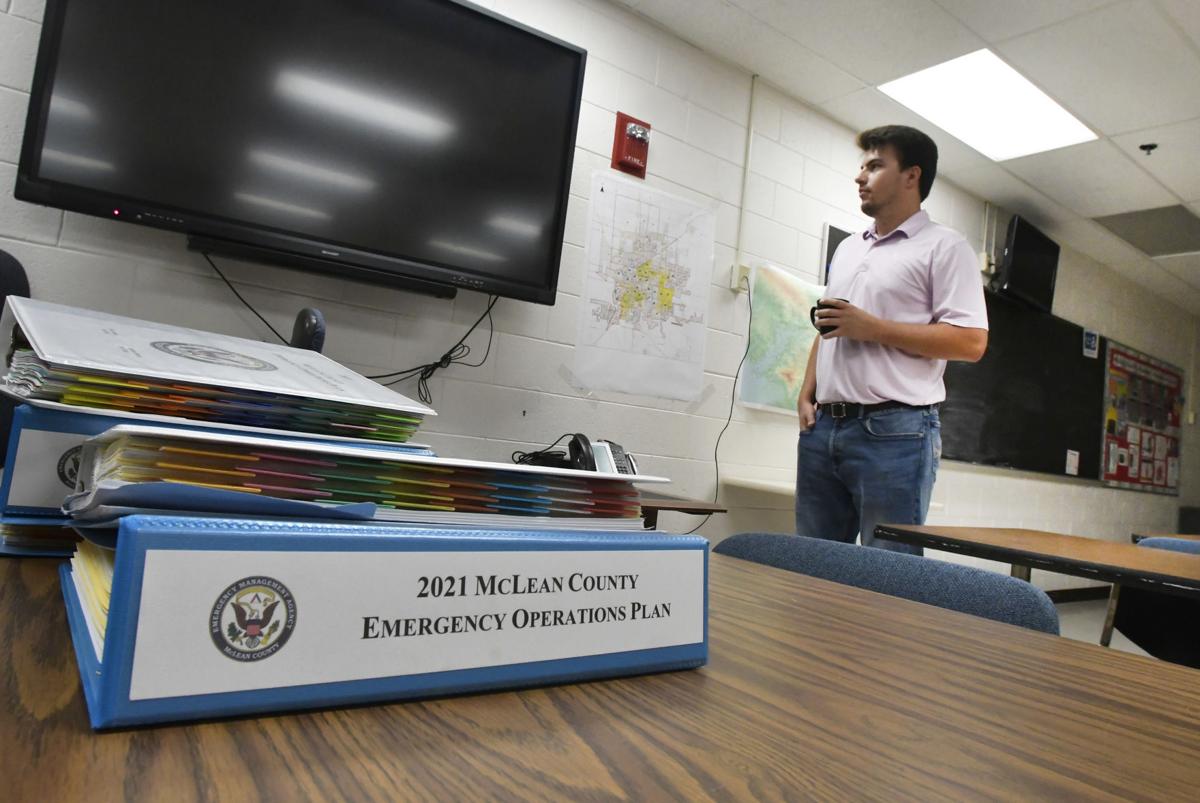 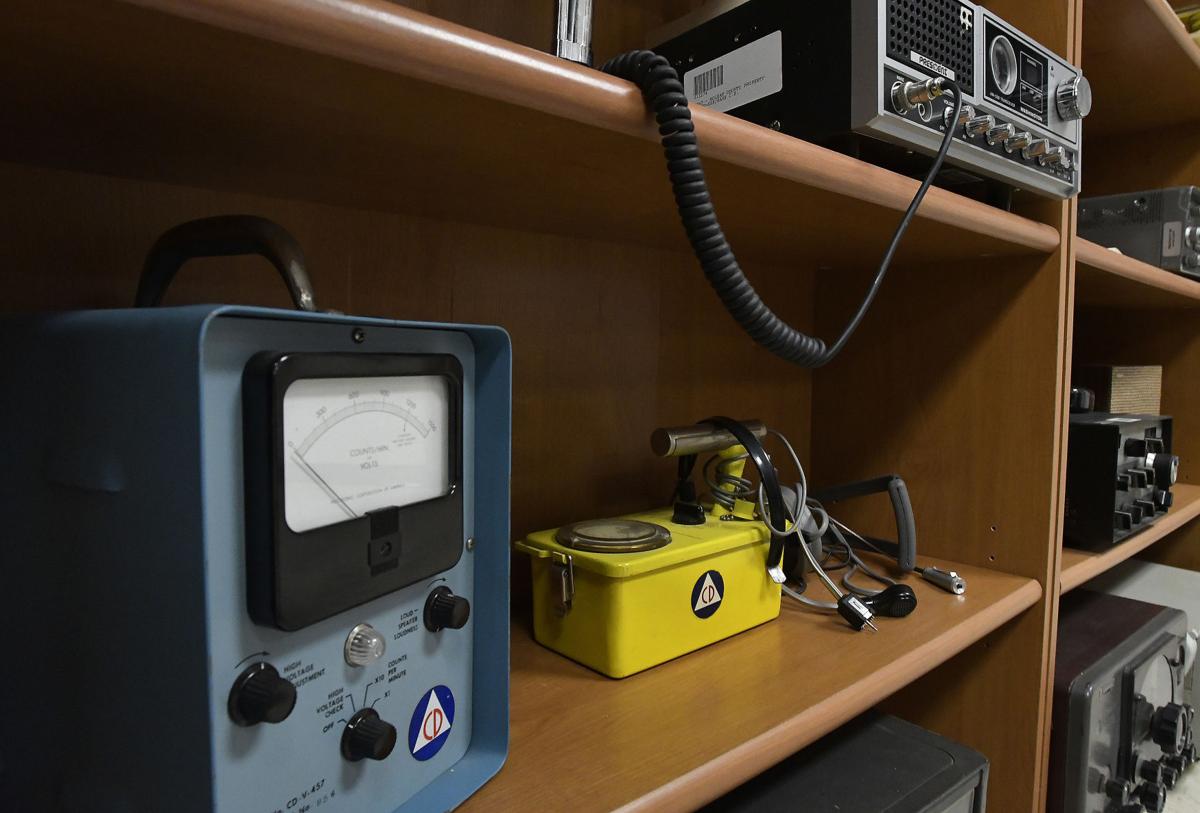 Old Geiger counters and radios are kept for historic reference in the EMA command center Law and Justice Center, Friday, Sept. 17. McLean County EMA is still part of an active disaster plan should an accident occur at the Clinton Nuclear Plant.