TNF: Scores and updates from Colts vs. Broncos

BLOOMINGTON — When the Bloomington Fire Department announced recently that staff had trained to fly drones, spokesman Eric Davison admitted they had some fun with it. The four freshly-minted pilots were each issued a propeller-topped beanie hat to celebrate.

But make no joke, flying a drone is serious business for the department. Davison said he's really impressed by how seriously the pilots were taking the drone program, and how they want to make it successful. Pilots are tracking hours, creating monthly flight and maintenance logs, and developing standard operating procedures for the department.

“The three guys that we picked were just awesome,” he said.

The agency is the new owner of an Autel EVO II DUAL, a high-tech four-rotor drone with an 8K-resolution thermal imaging camera, which can allow crews to see heat through smoke or darkness. The boxy orange device is about the size of a dinner plate and has a variety of sensors and cameras to beam back real-time information.

“Not only just obviously in a fire, we can look for hot spots, we can check for heat on a roof, but also search and rescue, we’ll be able to put on a thermal imaging camera and potentially see someone," said Davison.

Getting a different perspective can really benefit them at a large fire scene, he said.

Maximum height it is allowed to fly, in feet

“If there’s a fire in an attic, we can potentially see where the heat’s coming from, the strongest point on that roof, or the hottest point in that roof, and we’d be able to target that area as opposed to just poking blind holes looking for the fire,” he said.

Agencies across the country have been using drone technology to give firefighters a vantage point that was impossible to get before. Aerial vehicles also are deployed to track wildfires, and the National Guard uses the technology to map vulnerable areas.

“Being able to get an overhead view of a fire scene, being able to send it down to a hazmat incident to see what is occurring, or using it to help assist with a missing person, this drone will be a great tool to helping that incident commander in their decision-making," said Bloomington Chief Eric West.

The drone costs about $6,000. Davison said about $2,000 covered the base drone and the rest went toward the thermal imaging camera.

The bill was paid out of the public education budget, as well as from leftover operations funds, he said. It hasn’t yet been used at an active scene, although Davison said he has brought out his personal drone before.

“That’s kind of where it started to come about,” he said. “As a department, we started to see even just the public education side of it: shooting videos for the public, and also just for training.”

He said the drone videos can help demonstrate how to pull a hose from a new fire engine, or how command would like to see things get done.

Firefighter Paul Czapar said they previously used handheld thermal cameras, "but now we can put one up in the air and really see what's going on."

The new kit includes a controller with a 3.26-inch display with several color schemes for the thermal imaging camera. The views have names like "ironbow," "glowbow," "graded fire," "rainbow," "lava," "artic" and "hottest."

Within view at all times

Firefighter Clayton Matteson and Engineer Tim Baer passed their Remote Pilot Certificate test with the Federal Aviation Administration on Aug. 5, along with Davison and Czapar. They were trained by DroneUp, Davison said, based out of Virginia Beach, Virginia.

The drone can stay in flight for over 30 minutes, he said, and have it fully recharged within two hours. However, after a typical flight, it only needs a half hour on the charger.

Pilots must keep the drone within visual contact at all times, Davison said, and stay under a 400-foot altitude ceiling. He said max height can be near zero depending on how near they are to the Central Illinois Regional Airport.

He said they’re still working with the airport to make sure they’re doing their due diligence to not get in the way. Additionally, Davison said, they don’t need to hit their ceiling height to get a good view of a scene.

He also said they use the "Aloft" mobile app to keep track of where they’re at in aeronautical maps and what those local airspace rules are.

Follow an ISU-built solar car across a thousand-mile trek along the historic Sante Fe Trail.

Matteson said the new drone is a “completely unique” tool, adding that he doesn’t think it’s comparable to other firefighting apparatus.

“It’s nothing I thought I'd ever be doing when I started over 14 years ago,” Matteson said, “so it's definitely exciting.”

Davison said the drone is kind of a “grown-up’s toy” that they get to play with.

“At the same time, it's such a beneficial tool,” he added, “but I'll be honest, almost all firefighting is kind of cool."

“You can't say that going up in a truck or, you know, turning on the emergency lights isn't fun. It brings out the inner kid in all of us.”

Watch now: Listen to the Hog Calling Contest at the Illinois State Fair

"It’s a slap in the face for people who sacrificed time away from their families," said one veteran.

"This is a do-or-die election," GOP Co-chair Mark Shaw of Lake County said of the 2022 races. "You can’t beat somebody with nobody on the ballot."

Republican Day will take place Thursday at the Fairgrounds.

Bloomington man arrested on 9 warrants for sexual assault of minor

The investigation began in 2019 after a complaint was filed, police said.

A Chenoa man is accused by authorities of trying to produce child pornography.

Fire officials said Friday that one firefighter was taken to a hospital for heat exhaustion.

“It’s just more difficult getting people together to respond to a call now,” said Travis Wilson, of the McLean County Area EMS System.

Watch now: How Bloomington firefighting teams keep charged and ready for any call

Firefighters live a third of their lives in a firehouse — and during those extended hours, they bond as a second family, extending care back and forth, Battalion Chief Mike Hartiwig said. 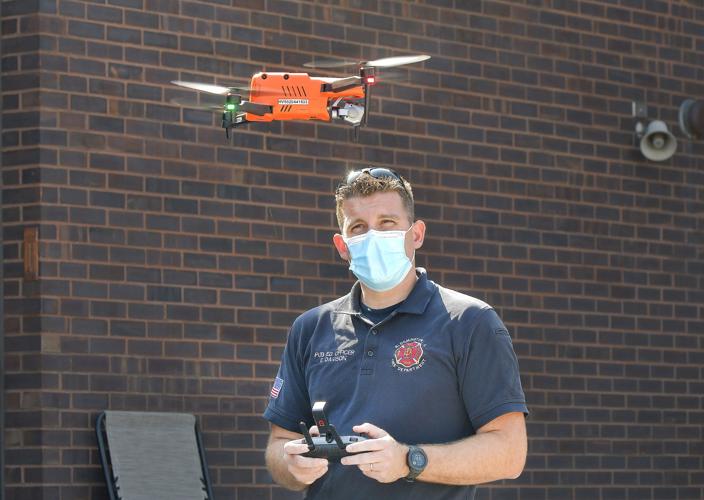 Eric Davison, Bloomington Fire Department public education officer, demonstrates the agency's new drone on Thursday. It is being deployed to give crews a better vantage point of hotspots and to help with rescues. 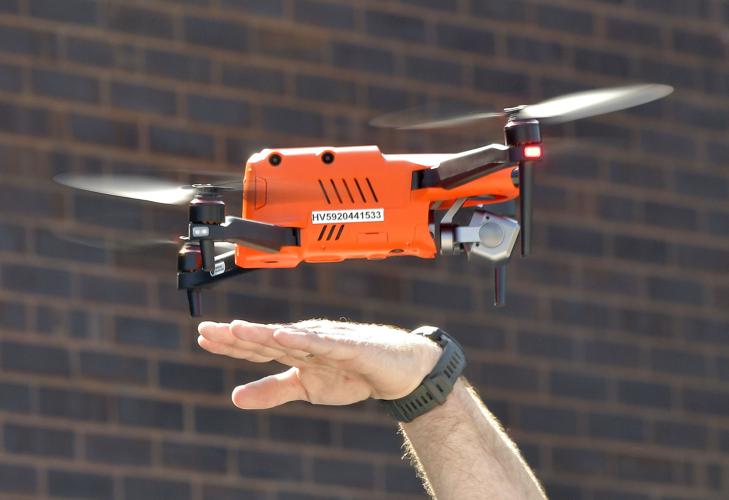 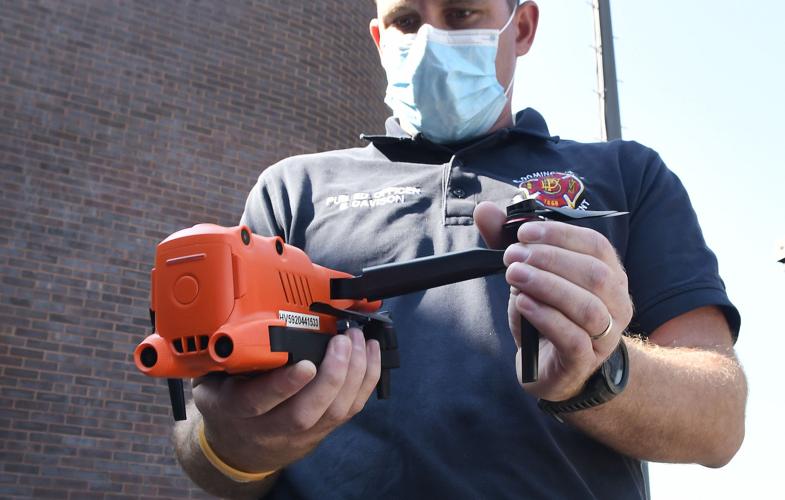 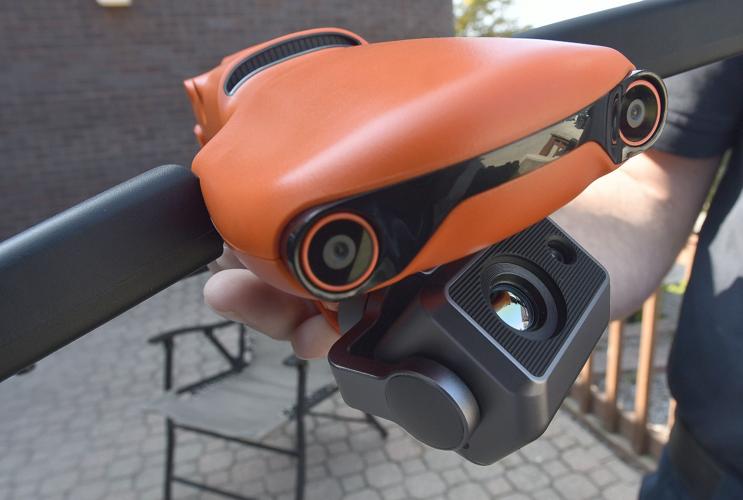 The drone used by the Bloomington Fire Department has a variety of cameras. Several cameras/sensors are used for obstacle avoidance while others can shoot video and still imagery and another can perform infrared photography to look for hot spots at fire scenes. 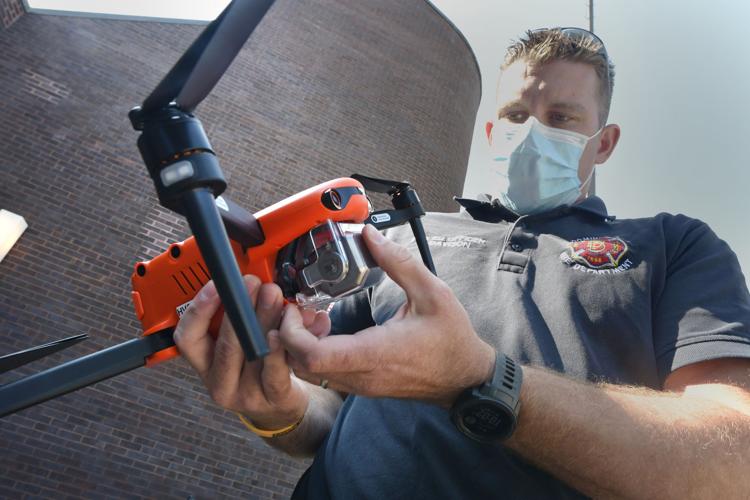 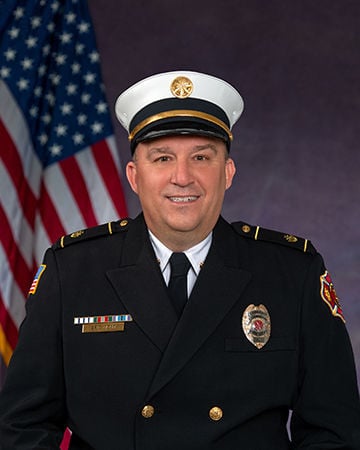