NORMAL — Logan Meagher, an Illinois State University student living near uptown Normal, said he heard “what I thought was an earthquake” early Saturday.

"I saw a huge flash of light. I came outside and there was this,” Meagher said.

The scene was of least 16 Union Pacific cargo train cars that had derailed, sending a mass of crumpled semitrailers, containers and other debris onto the tracks, snapping telephone poles and wrought-iron fencing along the way.

Some vehicles careened close to buildings and parking lots. Above the West Vernon Avenue underpass, one overturned trailer was left wedged between the guardrail and a fence, with a portion hanging over the concrete wall. A snapped-off portion of railing landed in the road’s median 14 feet below.

Crews wearing hardhats and florescent green clothing spent Saturday battling frigid temperatures as they started to clean up the debris field, which stretched from about West Vernon Avenue to South Fell Street just south of the ISU campus. Multiple intersections were closed.

Amtrak trains, which use the same tracks adjacent to West Beaufort Street as they travel between Chicago and St. Louis, were stopped, and passengers transferred to buses between Pontiac and Lincoln.

No injuries were reported in the incident, and a cause was not available Saturday. It also was not immediately clear how fast the train was going before the cars jumped the tracks.

Authorities said no hazardous materials were on the train, which was heading northbound. Union Pacific officials did not return messages Saturday seeking comment.

‘You knew something was wrong’

Temperatures were near zero at the time of the derailment around 5 a.m., said Normal Mayor Chris Koos, although officials were uncertain whether the weather had anything to do with the cause. Koos, who also serves on the national Amtrak board of directors, said the derailment happened at a train switching area.

By afternoon, a layer of snow covered the scene. In some places, trucks ripped open like tin cans could be seen, with cardboard boxes and other debris spilling out.

A section of the train derailed just yards away from a student apartment building at 605 Hester Ave. At least one car was split open, littering what appeared to be a mix of metal, cardboard and other debris across the tracks and ground. Sections of the train were laying on its side against an iron fence between the apartment buildings and train tracks.

A few people outside the building watched the crews work through freezing temperatures and a steady snow. One man who stopped by to see what had happened commented, “Thank God nobody was hurt,” due to the train’s proximity to the apartment buildings.

ISU students Nevada Halm, 23, and Hannah Cownick, 21, were leaving their apartment building near the crash site Saturday morning, taking a minute to catch a glimpse of what cause such a loud, crunching noise that woke Halm up.

“Usually the train will wake up me up a little bit, but it’s nothing crazy,” said Halm, a senior at ISU. “It was just obnoxiously loud, it just wasn’t normal. You knew something was wrong, that there was a crash or something. I didn’t know how it would happen, but I knew it wasn’t normal.”

Halm said it sounded like a car accident. But after peeking out her window, which overlooks the train tracks, she saw the train was still moving and thought it might have just been louder than the usual trains that run past her apartment.

“From the sound of it, I would expect something like this because of how loud it was,” she said. “I didn’t expect that to be what happened, I thought maybe that train is louder than other trains.”

When she woke up, though, Cownick, a junior, told her to look out the window.

“I’m just wondering how in the heck it happened,” she said.

The derailment canceled the Amtrak Lincoln Service and caused other changes, said spokeswoman Beth Toll. The rail service brought in track repair equipment to help with the repairs. Buses will be used between Lincoln and Pontiac until fixes are made.

At appx 5 a.m. on Feb. 13 the University was made aware of a cargo train derailment in Uptown Normal. At this time, there are no injuries, no hazardous materials aboard the train, and no current power outages. More at https://t.co/HL4Km8DIhl. Follow @NormalFire for updates.

Matt Swaney, a Normal Fire Department spokesman, said the Town of Normal, ISU, Ameren Illinois and Union Pacific had evaluated the site and repairs are underway.

Some power outages were reported Saturday afternoon as well.

The McLean County Emergency Management Agency is working with the Normal Fire Department, ISU and other groups. There is a possibility of an extended power outage to replace broken poles, and the EMA is waiting for additional information from Ameren. Officials said they’ll have assistance available to residents.

Swaney asked the public to stay clear of the area.

"Do not approach the train or the tracks in an attempt to take pictures or video," he said. "While there are no hazardous materials involved in the derailment, there are power lines down, and portions of the train or track may be energized and poses a electrocution hazard. In addition, it is unlawful to trespass on railroad property and may result in fines or arrest."

ISU student Trevor Tanke said he was staying in a building nearby and heard the crash.

Tanke said the scene shows it could have been worse.

David Proeber contributed to this story.

A look at all of the photos, videos and stories about the Saturday morning train derailment in Normal.

With federal shipments of the vaccine to Illinois remaining limited, that means providers will receive a smaller share of first doses. As a result, the number of initial doses being administered is going to decrease. Officials anticipate allocations of first doses will be able to increase again in March.

"The best stimulus check we can give our citizens are steady, good paying jobs," said state Rep. Mike Murphy, R-Springfield.

Gov. J.B. Pritzker on Friday defended his decision to increase the number of people eligible for COVID-19 vaccine in two weeks, saying the expansion will protect vulnerable Illinoisans and won't lead to more frustrated people waiting in line for limited doses.

Two people have been charged with stealing a funeral home van that had a body inside from a gas station in the St. Louis area. 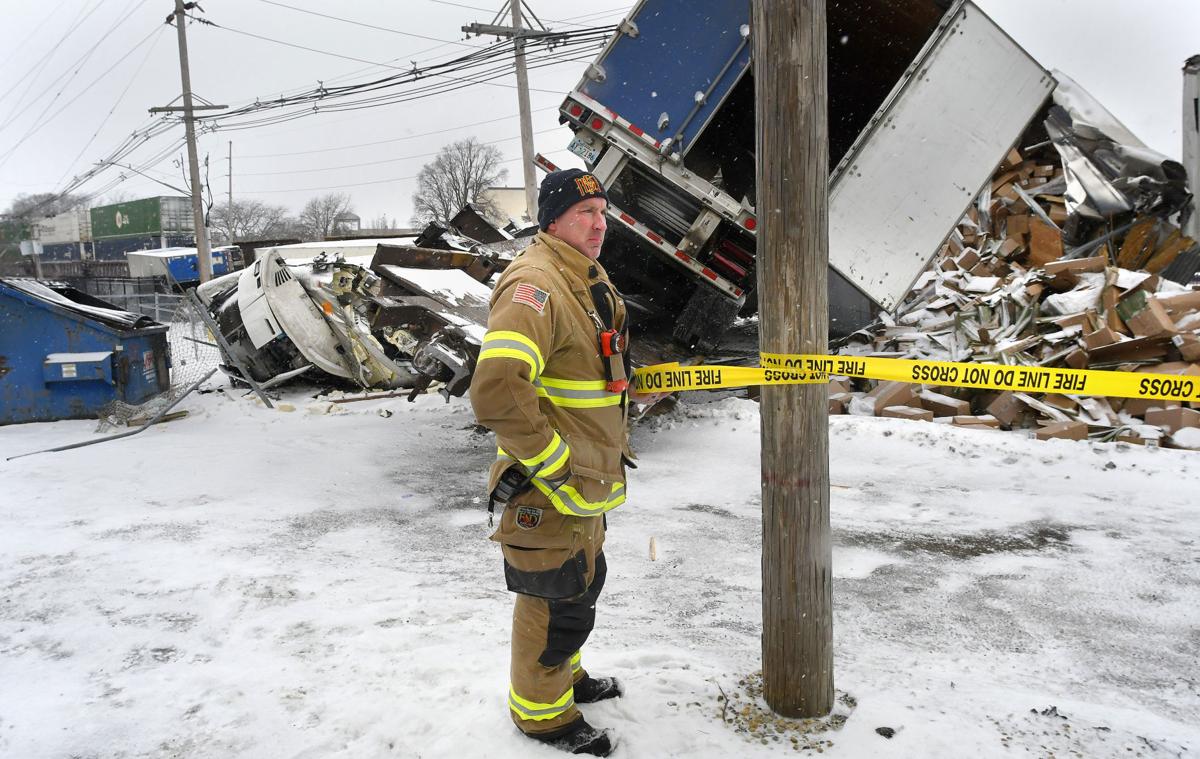 Debris from a train derailment is spread across tracks in uptown Normal on Saturday. 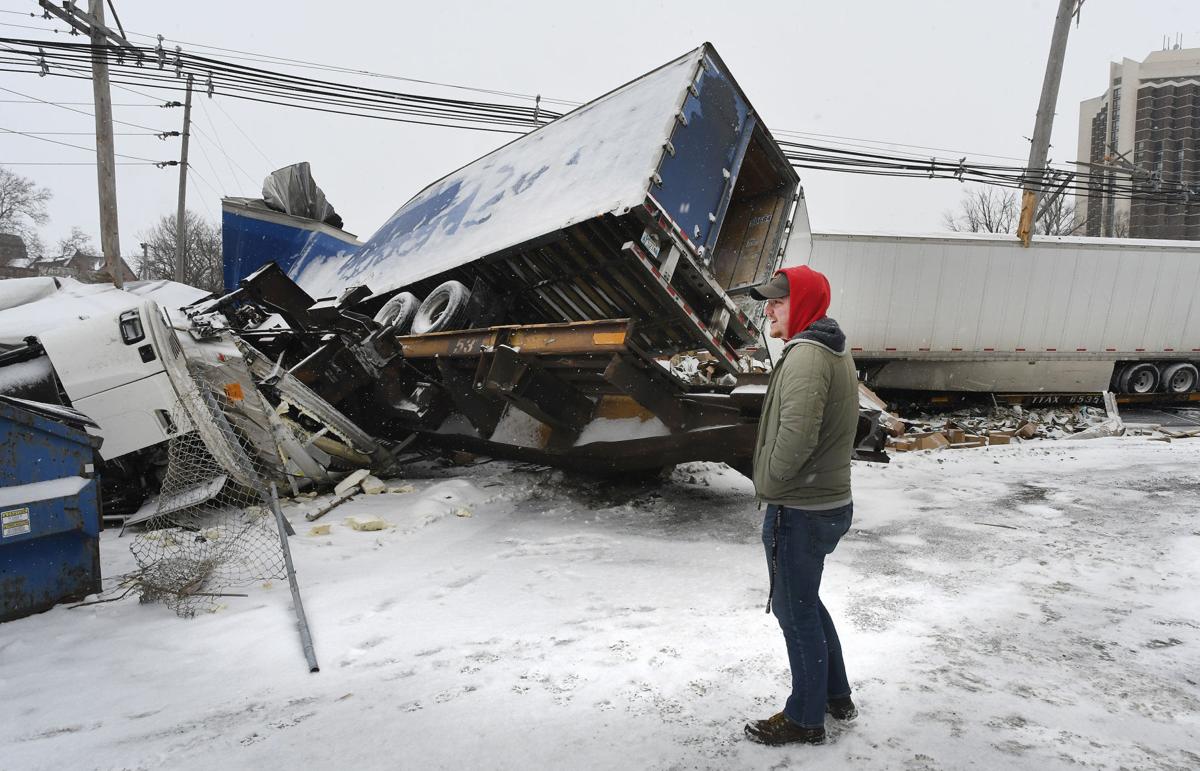 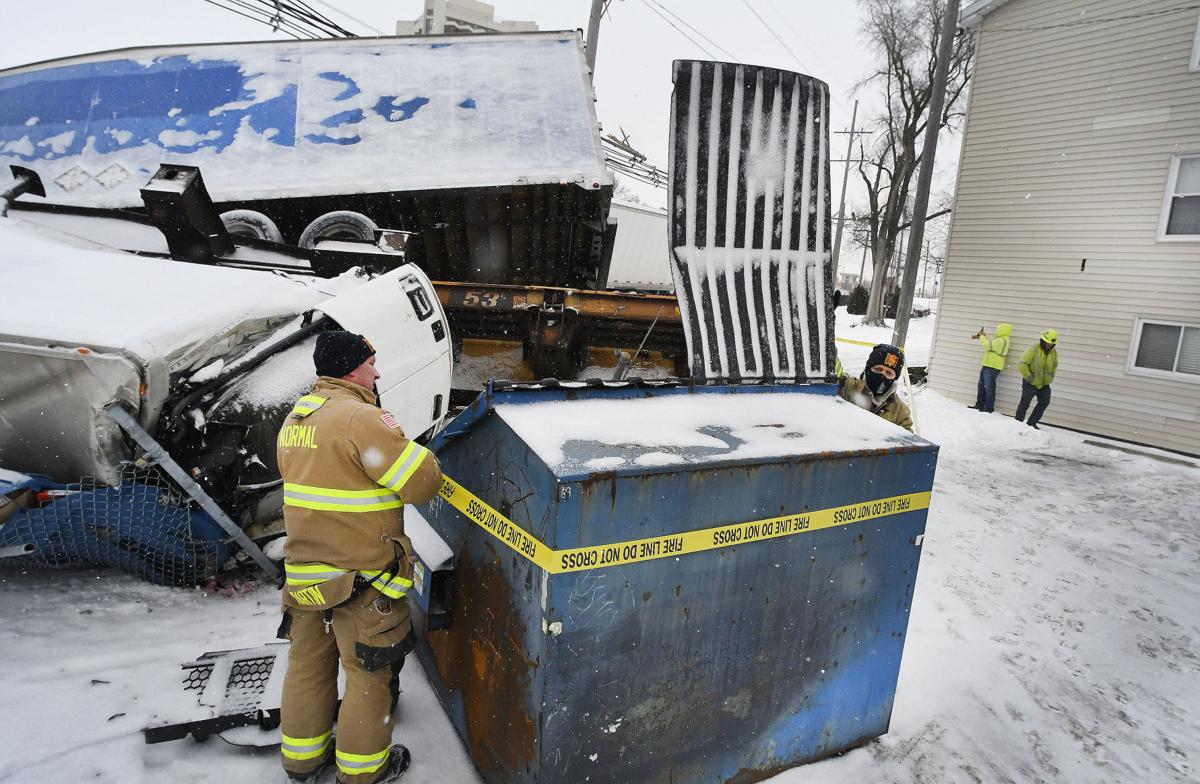 Normal firefighters close the scene of a derailed container train that derailed in Uptown Normal Saturday, Feb. 13, 2021. About 16 or 17 cars came off the the track north of the Vernon Avenue overpass and closed the main line through Normal. 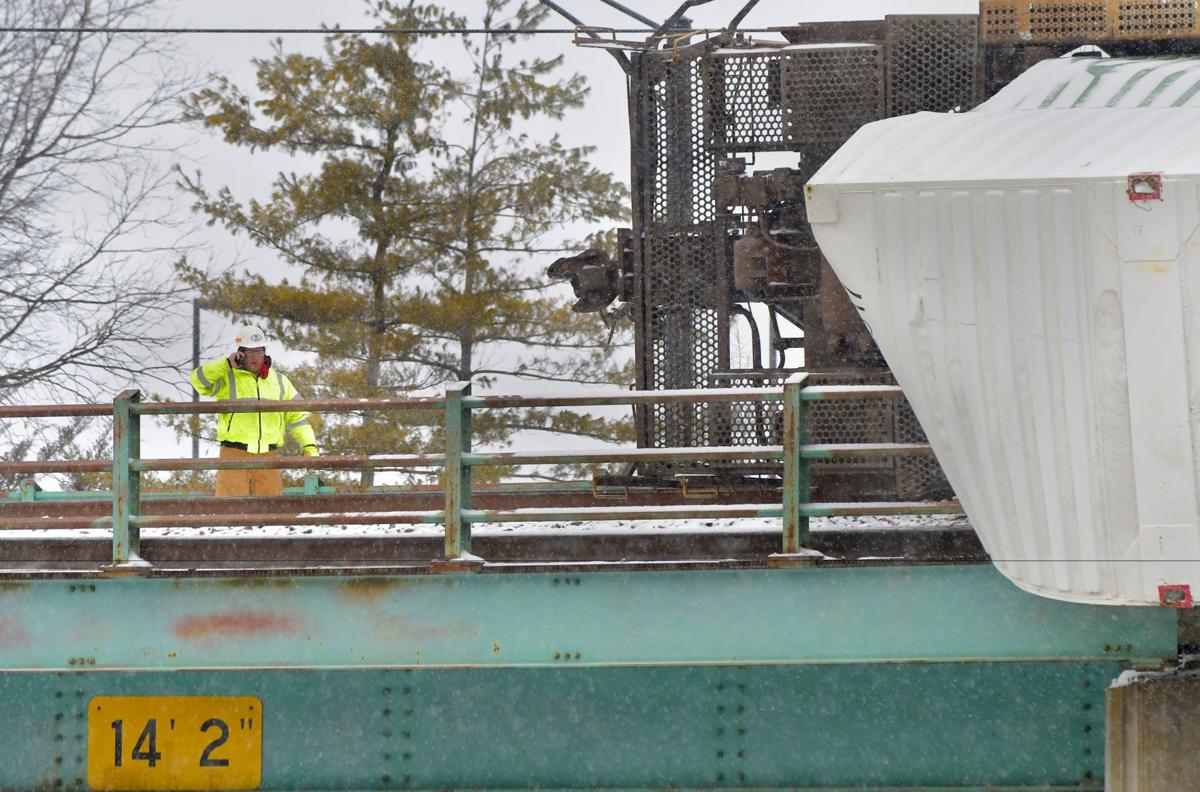 A railroad worker inspects damage after a northbound freight train derailed on the Union Pacific main line south of Uptown Normal Saturday. Amtrak traffic was shut down in both directions due to the incident. 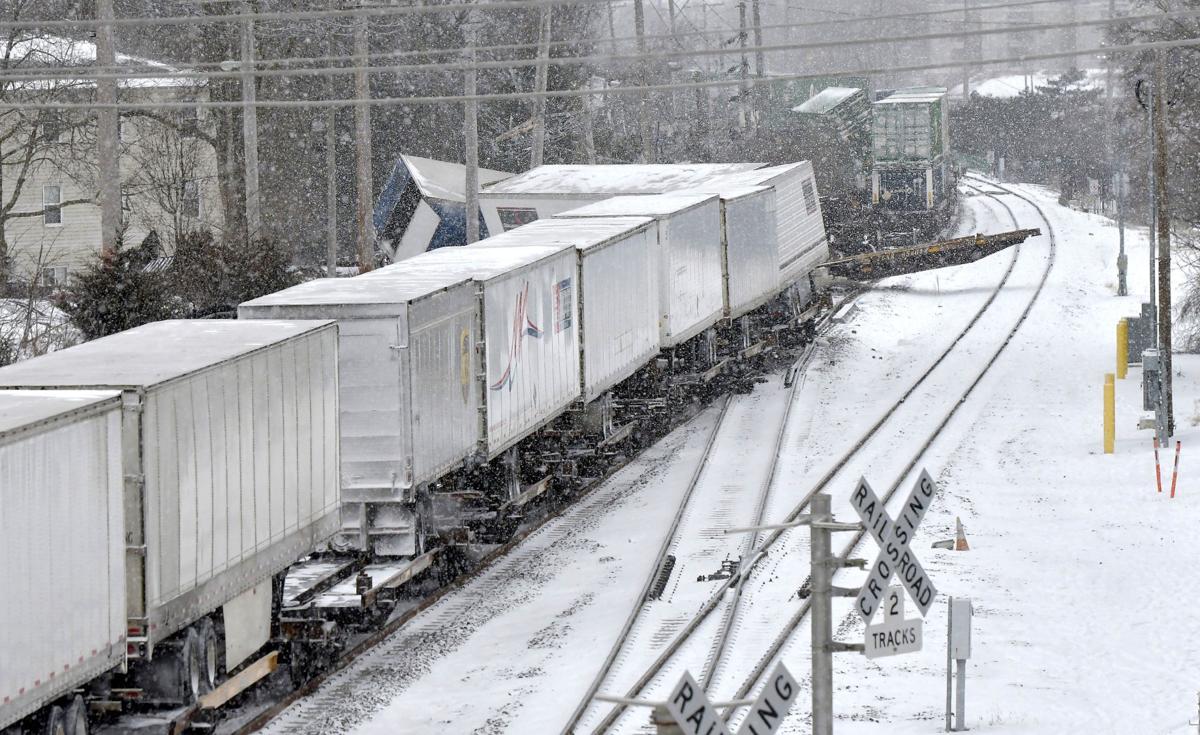 About 17 cars on a northbound freight train derailed on the Union Pacific main line south of uptown Normal Saturday. Amtrak traffic was shut down in both directions due to the incident.