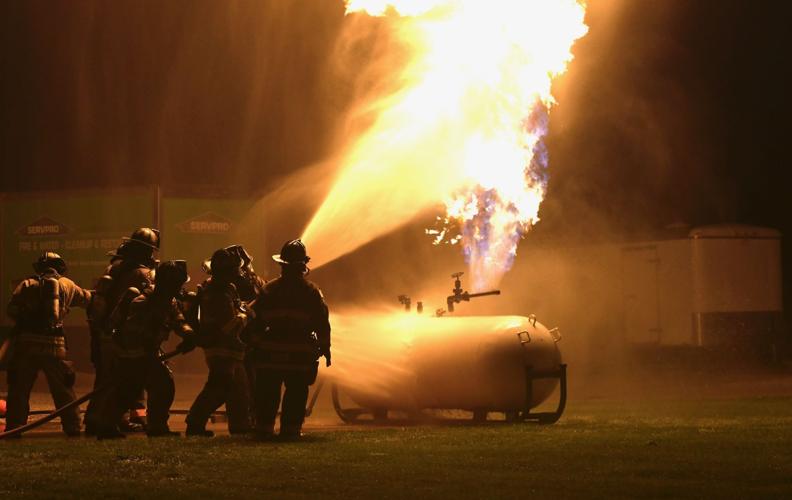 Bloomington firefighters train to put out a propane fire Tuesday at Station No. 2 at 1911 E. Hamilton Road. The propane for the training event was donated by Evergreen FS, and the training is provided free by the Illinois Fire Service Institute. 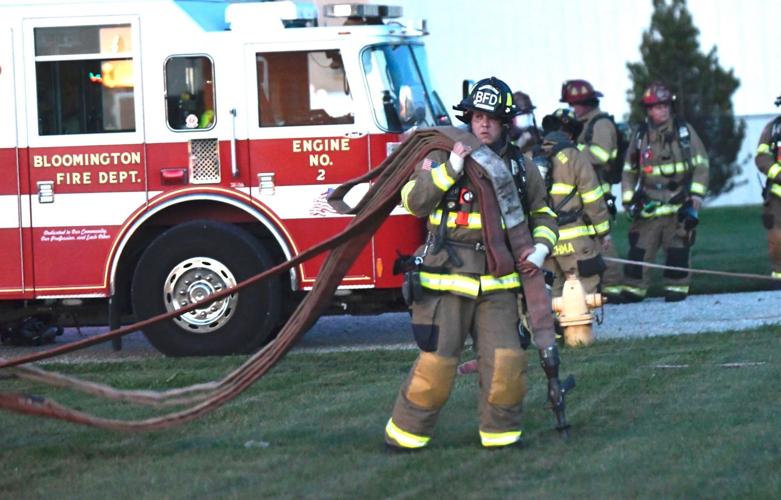 Bloomington firefighters set up equipment as they prepare for the live propane fire training exercise.

Compared to a building fire, putting out a propane fire is a totally different type of firefighting, said Eric Davison, public information officer for the Bloomington Fire Department.

Department staffers and others on Tuesday completed what Davison said is a "cornerstone class" with the Illinois Fire Service Institute: Liquefied Petroleum Gas Firefighting.

"This sort of training is done throughout the fire academy in basic fire training," he said Tuesday afternoon before the class. "It's not new to anyone, but it's a refresher and an amazing opportunity from IFSI to be proactive."

It was held at Bloomington Fire Station No. 2, 1911 E. Hamilton Road, with a 500 pound residential tank.

Watch now: How a $6,000 drone is Bloomington's new firefighting tool

"When something starts to boil," Davison said, "it creates pressure, and the vessel can no longer contain that pressure and explodes — and we're trying to avoid that."

It's a danger that's become scarred into Illinois firefighting history: Oct. 2 marked the 24th anniversary of an explosion that claimed the lives of two firefighters with the Carthage Fire Department. The IFSI website said Michael Mapes and Walter Buckert died in 1997 when they were hit by a large, exploding LP tank. They were fighting the fire at a farm outside of Burnside, which is two hours west of Peoria.

Clapp also said a record was set in Murdock when a rail car was blown a mile away.

Davison said there's a few different ways firefighters can prevent a BLEVE. One is by cooling down the container, which he said has a blow-off valve.

"It's a pressure regulator on the top," he said. "When it hits a certain pressure, it lets out the contents of that tank. As it starts to shoot off that gas, it's going to relieve some of the pressure in that tank."

Depending on the situation, he said, "sometimes it's best to let it burn off."

Davison said as they get water on top of the tank, it will potentially cool it down and avoid a BLEVE.

He also said if the tank is releasing gas and the pressure is dropping, "we can essentially shut off that thank."

"What you'll see in the class, we’ll open up a fog pattern, which is a wide open spray," he said, "and that creates a water curtain to get us closer to the tank itself.

"And then we will be able to shut off that valve."

While the whole class is about propane, Davison said it generally also deals with pressurized tanks that hold flammable content.

"Anytime we deal with hazardous materials, we want to ensure we know what the contents are," he said.

He said with propane, there's not a lot of danger with having it burn off.

"We burn propane for heating, cooking, and all sorts of things," Davison said.

"If it was a hazardous material, we would identify it, and if it's something that could cause a hazard by burning, we’re working more to turn that off," he continued.

The propane was donated by Evergreen FS.

"Partnerships like these allow us to provide better training and be of better service to the citizens of Bloomington," Davison said.

He also advised people to keep any kind of grill — propane or not — away from your home.

Hear the stories of two Bloomington firefighters who trekked out to New York City to support their brothers and sisters just six weeks after the 9/11 attacks.

The company broke ground Wednesday for construction of its 70,000-square-foot facility.

Central Illinoisans can expect to get a little wet this afternoon as scattered thunderstorms creep across the state.

Heroin and cocaine were seized from a Normal man following a Bloomington Police Department vice unit investigation, a prosecutor said.

9 facts about the Bloomington-born Beer Nuts

Peanuts were coated with salty-sugary glaze and sold by the scoop from this location.

Watch now: How 2 Bloomington kids rode to school on a fire truck

Washington School also prepared a welcoming message by decorating on their fence: “We ❤ BFD.”

Bloomington firefighters train to put out a propane fire Tuesday at Station No. 2 at 1911 E. Hamilton Road. The propane for the training event was donated by Evergreen FS, and the training is provided free by the Illinois Fire Service Institute. 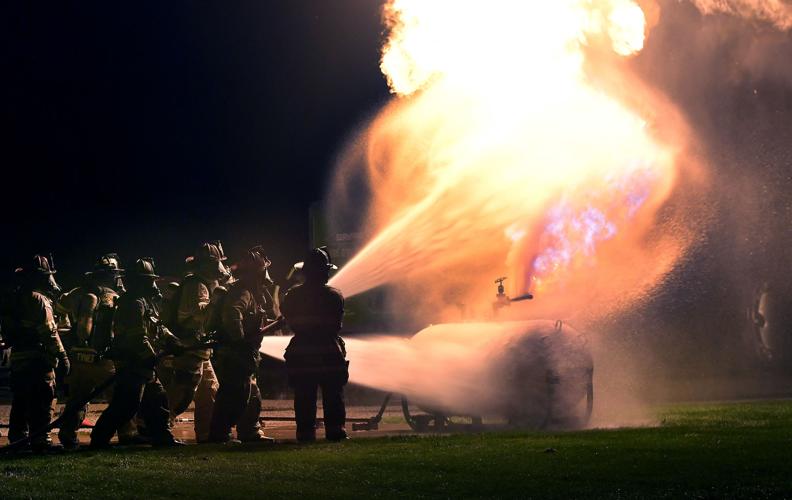 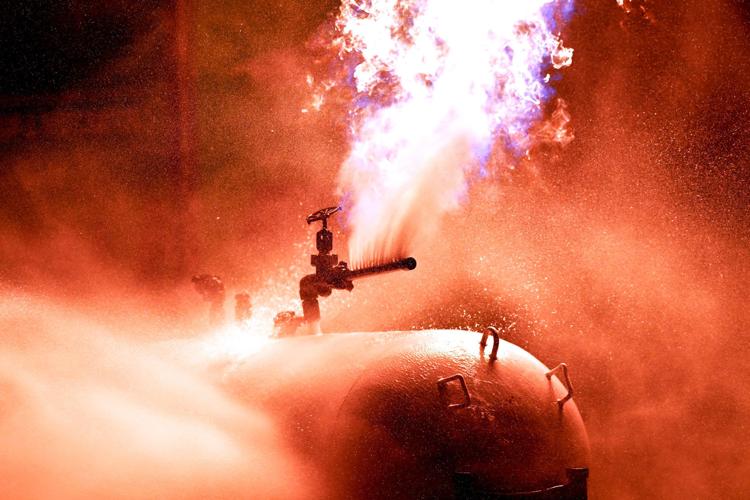 Flames shoot off the top of a propane stream as Bloomington firefighters fight a propane fire as part of their live propane fire training Tuesday, Oct. 12, 2021, at the department's Station 2, 1911 E. Hamilton Rd. 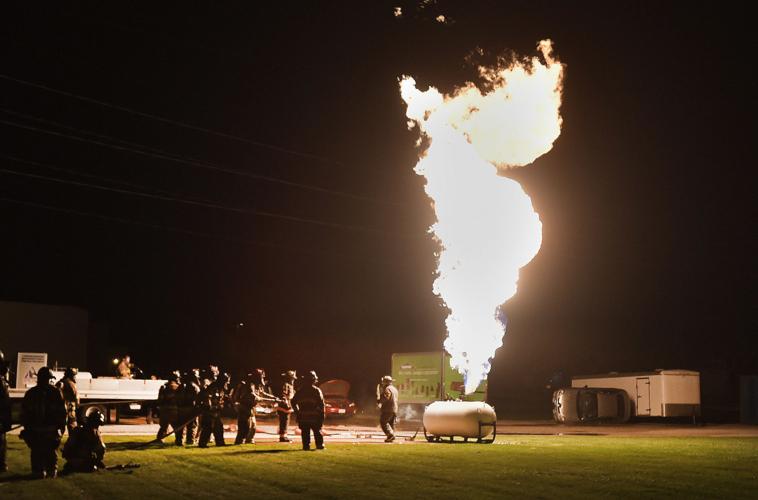 A fireball erupts from a propane tank as Bloomington firefighters prepare to attack the fire as part of their live propane fire training Tuesday, Oct. 12, 2021, at the department's Station 2, 1911 E. Hamilton Rd.

Bloomington firefighters set up equipment as they prepare for the live propane fire training exercise.