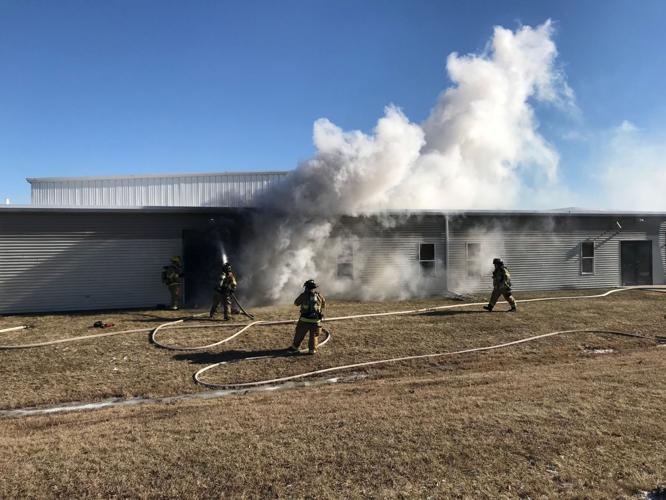 Crews respond to Victory Church in rural Bloomington on Monday. 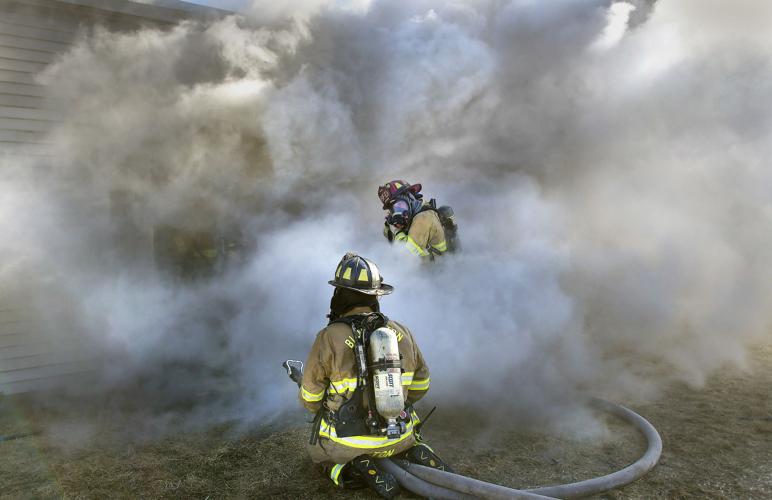 Firefighters prepare to enter Victory Church, 18180 W. U.S. 150 southeast of Bloomington, after fire broke out in the building on Monday. See a video with this story at pantagraph.com. 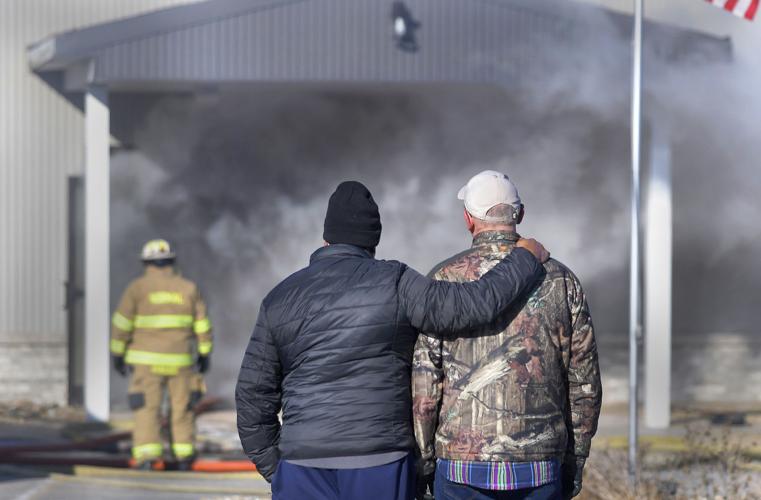 A member of Victory Church in rural Bloomington consoles with lead pastor Ed Herald, right, as smoke billows out the front door on Monday. Fire caused extensive damage in the 18180 W. U.S. 150 church.

BLOOMINGTON — Fire crews spent more than five hours extinguishing a blaze inside Victory Church in rural Bloomington on Monday, where members gathered in the parking lot and promised to rebuild.

"Honestly, I'm numb. I can't even put any thoughts together — what it's going to take to rebuild," said Lead Pastor Ed Herald.

No injuries were reported and the extent of damage at 18180 U.S. Highway 150 building has not yet been thoroughly investigated, but early indicators show widespread smoke damage.

Flames and thick smoke could be seen coming from the northwest corner of the building, where the kitchen is located. Firefighters cut a hole through steel siding on the north side to gain access.

“Smoke went through the entire facility … so the whole place is pretty much damaged,” said Bloomington Fire Department spokesman Eric Davison. “Now as far as fire damage, most of the fire was maintained on that side (northwest) of the building.”

Downs Fire Protection District members were dispatched to the scene shortly before noon after a fire alarm was set off. The Bloomington Fire Department was dispatched at 12:08 p.m.

Flames were considered to be extinguished or contained by about 5 p.m., officials said.

The cause of fire or where it began has not been confirmed. Davison said that when BFD arrived, a thermal imaging drone located fire in the northwest corner of the building.

When Associate Pastor Annette Fellows received notification that the church’s fire alarm went off, she “didn’t even think twice” because it has been triggered before when there was no fire.

She was the closest person to the church who has a key to the building, so Fellows got in her car and started to drive to the church so firefighters could investigate. Crews were already on scene working the northwest corner of the building when she arrived, she said.

Nobody was inside the building at the time the fire started, Fellows and officials said.

“I got to the school down there (Evans Junior High School) and I saw smoke,” Fellows said. “I thought, oh, Jesus, that’s smoke and it looks like it’s our building. When I pulled up, I was just so rattled. I could barely even dial the number.”

Fellows immediately called Herald, who was at home. He logged into the church’s online surveillance system and began to see smoke.

“This is devastating what we’re seeing here,” Herald told The Pantagraph from the church parking lot, surrounded by emergency vehicles and other church members. “My sons and I, and some members of the congregation, we did a lot of the work in here. We had contractors, of course, helping do the things we couldn’t, but there’s a lot of blood, sweat and tears in this building.”

Construction on the building began in 2006 and the church opened in 2007. The congregation started in 1999.

Herald said the church has about 350 members.

More than 30 members gathered in the parking lot throughout the afternoon. Many hugged and some cried.

“The most devastating part was when they came out and said, ‘We’ve got to pull our guys out, there’s really nothing we can do right now.' That took me down. I think we all felt the same way,” Fellows said, adding that one member “buckled” and fell to his knees.

She said leaders of the church planned to gather Monday night "because we need each other to spend some time, to pray and worship, and be together."

Herald said leaders of other Bloomington-Normal churches already began calling him Monday afternoon to offer assistance or a space for worship.

Victory Church has held online services since the beginning of the COVID-19 pandemic. It returned to in-person worship about a year ago, but it also has kept the virtual option.

Members of Journey Church in Normal set up a table in the parking lot and offered coffee and food to onlookers and firefighters.

Crews from Bloomington, Bloomington Township, Colfax, Dale Township, Downs, Ellsworth and Towanda were on the scene. Tanker trucks were also used because the area doesn't have fire hydrants.

Fire officials were driving about a mile down the road to the nearest fire hydrant at Evans Junior High School to refill the tanker trucks. Another tanker truck was seen refilling water at the far southeast edge of Bloomington near U.S. Highway 150 and East Hamilton Road.

Herald reiterated that although he does not know how the fire happened, he does know that “we’ll rebuild.”

Herald said: "I just know that I'm not going to let the people down. Whatever it is that we have to do to rebuild and make this the church that the people here have always loved, and we'll just continue on. I don't know what that looks like, but I just know that we can't give up."

A lack of fire hydrants has required crews to use tanker trucks for water. Water being pumped from the red pools as smoke continues to pour out of the northwest corner of the building. @Pantagraph pic.twitter.com/WwAoNoJvs7

Flick: How this 50,000-pound mermaid ended up in Bloomington

“I don’t have hobbies,” billionaire Warren Buffett once said. “I just have passions that look like it.”

Firefighters fight a fire that destroyed a large barn at a firewood business in southwest Bloomington Saturday.

A Sangamon County judge heard nearly two full days of arguments related to COVID mitigations in Illinois schools this week, but it could be mo…

A two-year contract with Flock Safety to purchase and install 10 automatic license plate readers in Bloomington is tabled to the first week of February.

BLOOMINGTON — A Bloomington man was held in custody without bond Monday on domestic battery charges.

Bloomington District 87 is shortening the school day at Bloomington junior and Bloomington high schools to avoid lunch periods where the potential spread of CVOID is harder to mitigate.

Humans weren't the only ones displaced after tornados ravaged the Midwest on Dec. 10.

The Bloomington Fire Department confirmed via Facebook this evening that three residents tragically lost their pets in the fire. The house is likely a total loss.

Watch now: How Bloomington firefighting teams keep charged and ready for any call

Firefighters live a third of their lives in a firehouse — and during those extended hours, they bond as a second family, extending care back and forth, Battalion Chief Mike Hartiwig said.

Crews respond to Victory Church in rural Bloomington on Monday.

Firefighters prepare to enter Victory Church, 18180 W. U.S. 150 southeast of Bloomington, after fire broke out in the building on Monday. See a video with this story at pantagraph.com. 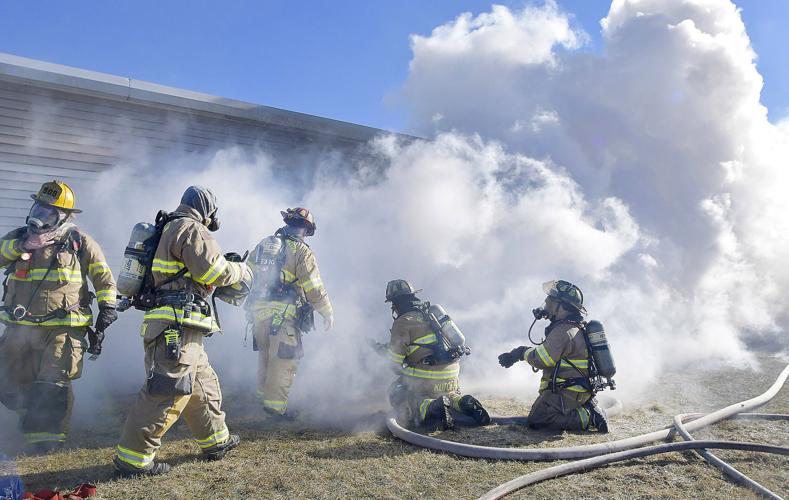 Firefighters respond to Victory Church in rural Bloomington on Monday.

A member of Victory Church in rural Bloomington consoles with lead pastor Ed Herald, right, as smoke billows out the front door on Monday. Fire caused extensive damage in the 18180 W. U.S. 150 church. 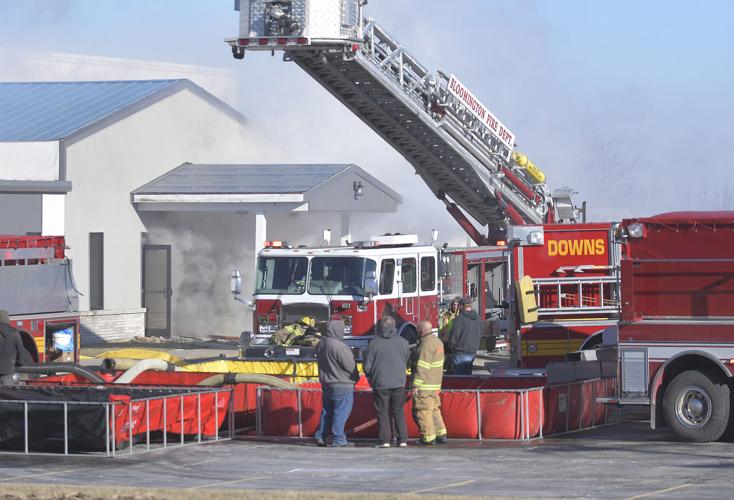 Firefighters set up collecting pools as they have water trucks supply water to fight the fire at Victory Church, 18180 W. U.S. 150 southeast of Bloomington, Monday. 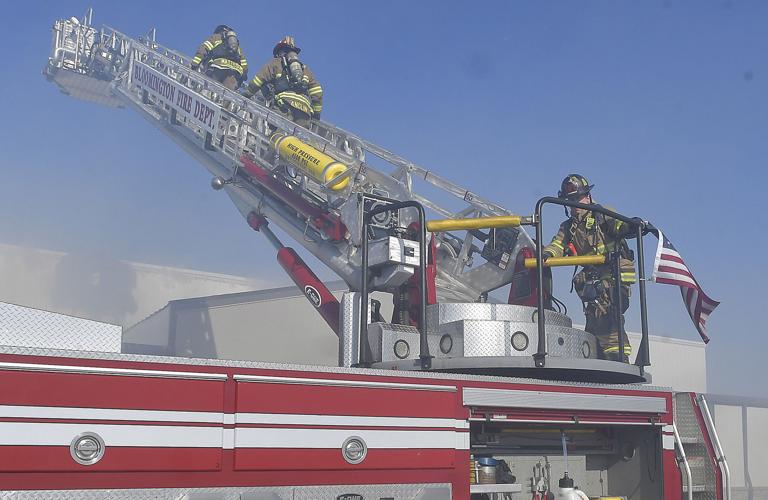 Bloomington firefighters deploy an aerial ladder as they fight a fire at Victory Church, 18180 W. U.S. 150 southeast of Bloomington, Monday. 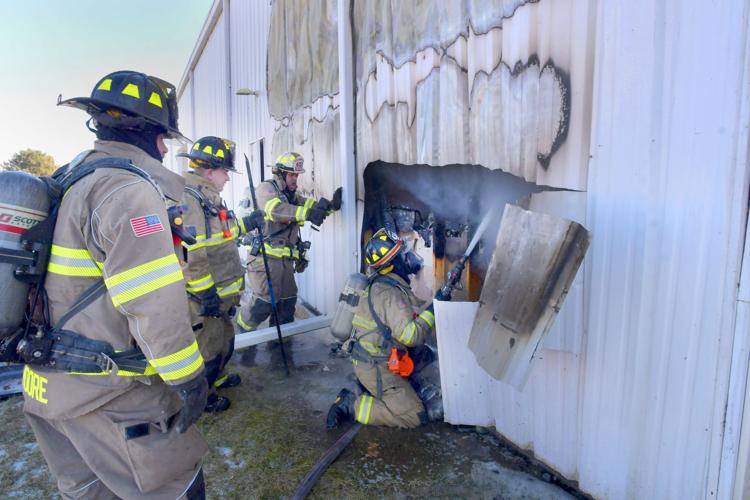 Firefighters cut through a steel sided wall as they gain access to a fire that swept through Victory Church, 18180 W. U.S. 150 southeast of Bloomington, Monday.