NORMAL — Construction of a 30 acre gas station and RV park in northwest Normal is set to begin next spring.

Love's Travel Stops is planning an expansive new location at the corner of North Main street and Interstate 55 with plenty of amenities and other attractions for travelers, including a dog park, walking paths, and a grilling station.

The convenience store giant, which owns more than 510 locations across 41 states, received a green light on its preliminary site plans, which include a 9,800-square-foot gas station with an attached Bojangles restaurant, and a 13,000-square-foot RV park.

"The amount of fuel and gas that they're going to sell is totally going to benefit the town," Councilman Stan Nord said Monday during a Town Council meeting, listing the various gas tax and sales tax the town would benefit from. "All that is coming back to Normal."

The Town Council unanimously approved the site plan, which included a preliminary subdivision plan and a zoning request for the property, which is currently used as farmland.

The Normal Town Council on Monday unanimously approved a zoning request, preliminary site plan, and a preliminary subdivision plan for the proposed site, which included a variance request for a 200-foot high-rise sign. 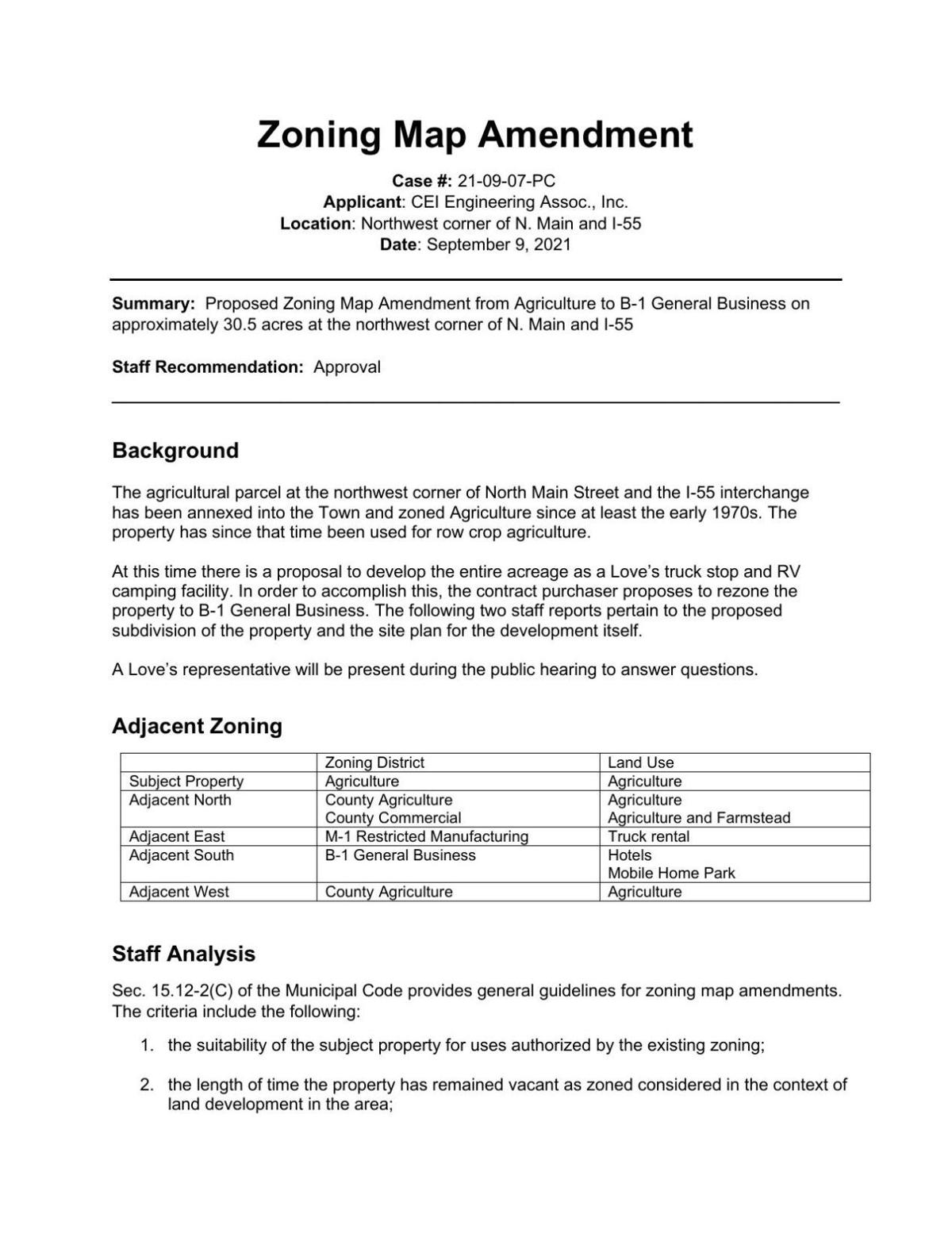 Normal planning commissioners had recommended the council to not include the variance for the sign, which is three times the size code typically allows.

Members of the town council said that they did not believe allowing the variance would create a precedent and the height is important for the safety of motorists traveling the interstate at high speeds.

"The chances of this happening, I just don't see it as a danger in terms of precedent setting," said Councilwoman Kathleen Lorenz. "I feel comfortable with this variance."

A family who has owns farmland north of a proposed truck stop in northwest Normal voiced concerns for safety Monday and during a recent planning commission meeting. Bill Gleason, senior project manager with Oklahoma-based gas station giant, said Love's will work with them to address their needs.

"Let's get it built and anything that needs to be done to satisfy you, we'll get it done," Gleason said during the meeting, turning to directly address the family sitting behind him.

Paul Larkin and his daughter, Cathy Diefenbach live on property that is around 500 feet north of where Love's is planning to build the gas station. The family has owned the property for 97 years have said they would primarily like to see a fence built around the future site.

Love's has promised to build a 4-foot-tall fence around the perimeter, and if any future issues arises, Gleason said the company will work with the family to meet their needs.

In other business, the council approved:

A former Illinois State University student is urging Normal to adopt a fire extinguisher regulation for student housing that does not have sprinkler systems.

Claire Wagner, who recently graduated from the university, spoke Monday night during a Town Council meeting about a close call she and her neighbors had with a fire.

"With 20 other students in the same sprinkler-less building, the only difference between me, my neighbors and the Sugar Creek apartments that burnt down last semester is that the spark didn't travel," she said. "Most students do not prioritize a fire extinguisher on their back to school list, and even if they did, I cannot guarantee that my neighbors will have one, or that their fire will not travel into my apartment."

Wagner has launched a petition that has been signed by more than 500 ISU students, faculty, and staff, as well as the ISU student government, for the town to adopt an ordinance that would protect students from dangerous fires.

Several residents of the Evergreen Village Planned Unit Development spoke on a re-subdivision of a few lots. The new plan would take the number of proposed housing units from 13 to 12.

The residents, while they said the developers had satisfied their concerns, said they felt left out of the process, which did not go to planning commission prior to the meeting.

John McKey, who started wind surfing in the 1980s, said “the thrill of the wind and going fast and getting out in nature” are what attracts him to the sport.