Become a Member
Read Today's E-edition
Share This
Watch now: Here are the roads up for resurfacing in Normal
0 Comments
Share this

The Normal Town Council on Monday unanimously approved 6-0 awarding a $1,119,265.70 contract to H.J. Eppel & Co. Inc. of Pontiac for its second road resurfacing package, which will resurface 2.1 centerline miles of street.

Resurfacing will run May through Oct. 1. 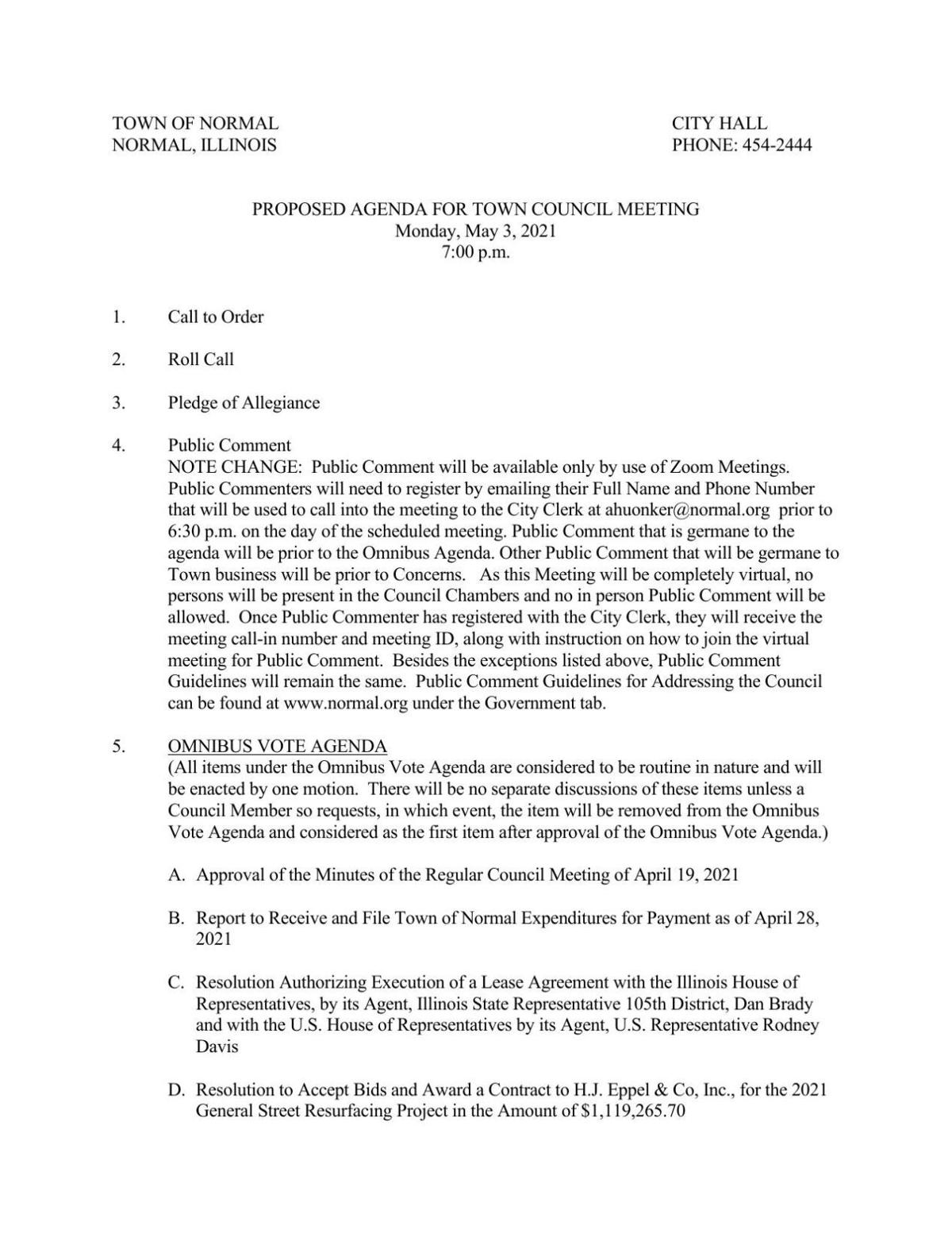 Mayor Chris Koos did not attend the Monday meeting. He was tending to a family matter, said Mayor Pro-tem Kevin McCarthy.

Roads up for resurfacing are:

After some back and forth discussion the Town Council approved 5-1 extending a lease agreement with State Rep. Dan Brady, R-Normal, and U.S. Rep. Rodney Davis, R-Taylorville, for continued use of the town's office space in the lower level of 104 W. North St.

Councilman Stan Nord voted 'no' on the lease agreement.

Brady currently uses the space part-time as his Bloomington-Normal district office, and Davis shares the space as one of several offices he has throughout his congressional district. The lease expired in January and has continued on a monthly basis per the lease agreement.

The new lease coincides with Davis and Brady's elected terms, beginning January 2021 through January 2023. Either party may terminate the leas agreement with 30 days notice.

The plan included proposals to fund a number of programs addressing fair housing, accessibility, health and wellness, and community development.

"Fair housing is the right of the person to choose housing free of discrimination," said Petri, who asked the council to continue supporting its partnership with Prairie State Legal Services, which assists families with fair housing.

"We have really appreciated the town's support this past year on this project," she said.

The action plan was unanimously approved 6-0.

10 Bloomington-Normal photos from the Library of Congress

McLean County deputy to be honored in Springfield

“This annual ceremony honors those who made the ultimate sacrifice while serving their communities,” said Illinois Fraternal Order of Police State Lodge President Chris Southwood.

Police recovered a loaded pistol firearm behind one of the buildings, authorities said.

Officers responded to the 600 block of North Clinton Street at about 2:45 p.m. for a report of shots fired in the area.

More than 100 educators participated in the Chick It Out program this year, bringing eggs to 33 schools, eight daycares and 24 home schools.

“I didn’t like the tone of tonight’s meeting, and that concerns me,” Councilwoman Kathleen Lorenz said. "We can't continue in this discourse."