BLOOMINGTON — A decade after he took his first oath of office as a Bloomington City Council alderman, Mboka Mwilambwe on Saturday took another oath.

But this time, the vow was not like the other three before it — Mwilambwe, 50, pledged to "faithfully discharge the duties" of Bloomington mayor.

In doing so, he became the first person of color to take the mayoral oath in Bloomington.

"My parents ... taught me to lead my life with integrity, to respect others and to be inclusive," Mwilambwe said during a 20-minute speech delivered on the south side of the Bloomington Center for the Performing Arts. "This is exactly how we ran our campaign, and this is exactly what you can expect from me as mayor."

The occasion marked a formal changing of the municipal guard, with outgoing Mayor Tari Renner acknowledging the transition.

"I spent eight years of my life as mayor, certainly the honor of a lifetime, and certainly while making mistakes and certainly something that moving forward we've made progress and will continue to make progress with the great team we have," said Renner, who was first elected in 2013 and did not seek a third term.

Renner emphasized how critical "peaceful, productive transitions" between one group of elected officials and the next is to American democracy, as well as having faith in elections.

Mwilambwe, taking that message seriously, used his first remarks as mayor — at times his voice breaking with emotion — to thank his campaign staff, introduce his family and recognize the council he will lead.

He also outlined his goals — improving infrastructure, growing the local economy and building community — for his first term, which will end in 2025.

But the "most important element of my tenure to tackle as mayor," Mwilambwe said, is addressing negativity in the community.

"We must present a united front and a positive view of our community if we are going to attract or retain businesses and residents," Mwilambwe said. "Our future prosperity depends on it, and I commit to you that I will work tirelessly to bring us together more as a community."

Mwilambwe said "it is everybody's job" to "bring everybody together."

He further said that "pulling together in same direction" does not preclude community members from disagreeing.

"It is perfectly OK to disagree," Mwilambwe said. "It simply means that we all come to the table seeking to understand each other, not demonize each other, because we are all part of the same community."

That model and an "incredible promise," Mwilambwe said, was presented to him three decades ago, when he first came to Bloomington.

"Thirty years later, I'm here to tell you that the promise held true," Mwilambwe said. "This wonderful community has now elevated an immigrant to the rank of mayor. Think about what that says to the rest of the world about the goodness of our community and the hope that it represents for many."

11 Bloomington-Normal photos from the Library of Congress

Despite collecting the most total votes among the three candidates vying in Tuesday's election to lead the city, Bloomington Mayor-elect Mboka Mwilambwe was the top vote-getter in only two of the city's nine wards.

As of Friday night, 2,000 people in Illinois were hospitalized with COVID-19, with 473 of those patients in intensive care units and 238 on ventilators.

Council on Monday will also vote to amend a portion of the ordinance related to utility shutoffs.

If Mboka Mwilambwe couldn't perform his duties as mayor, then Ward 1 Ald. Jamie Mathy would step-in to lead the city.

Check out these amazing secret tunnels built under Liverpool

Biden: We have to act now on climate change

Biden: We have to act now on climate change

Bloomington Mayor Mboka Mwilambwe delivers a speech Saturday outside the Bloomington Center for the Performing Arts after being sworn in along with five Bloomington City Council members. 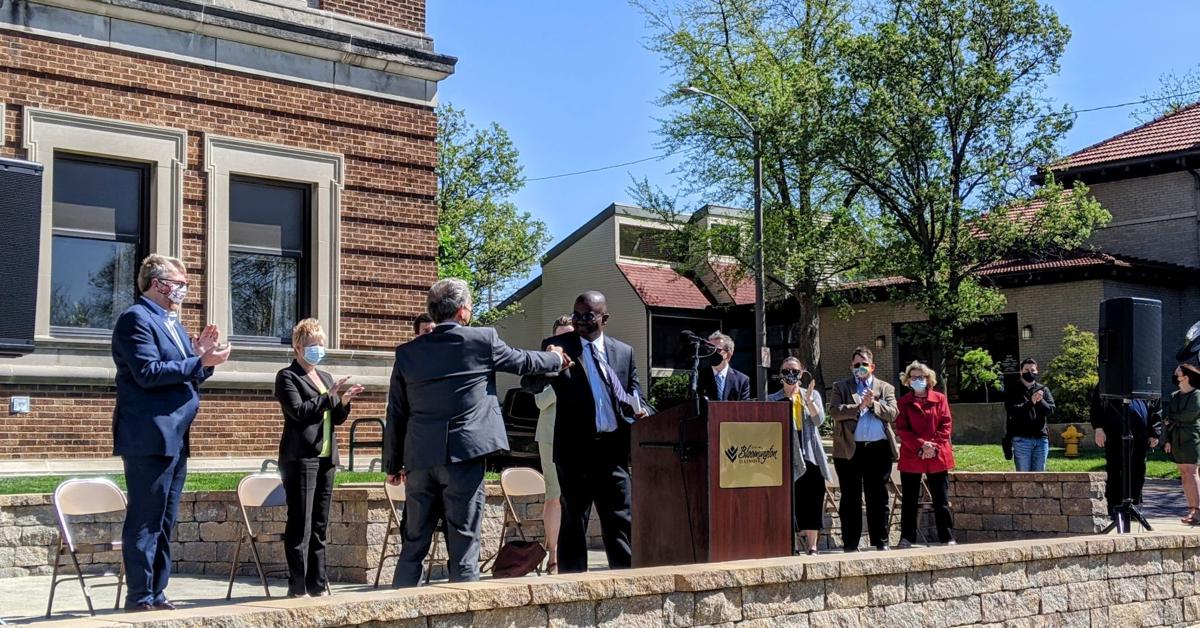