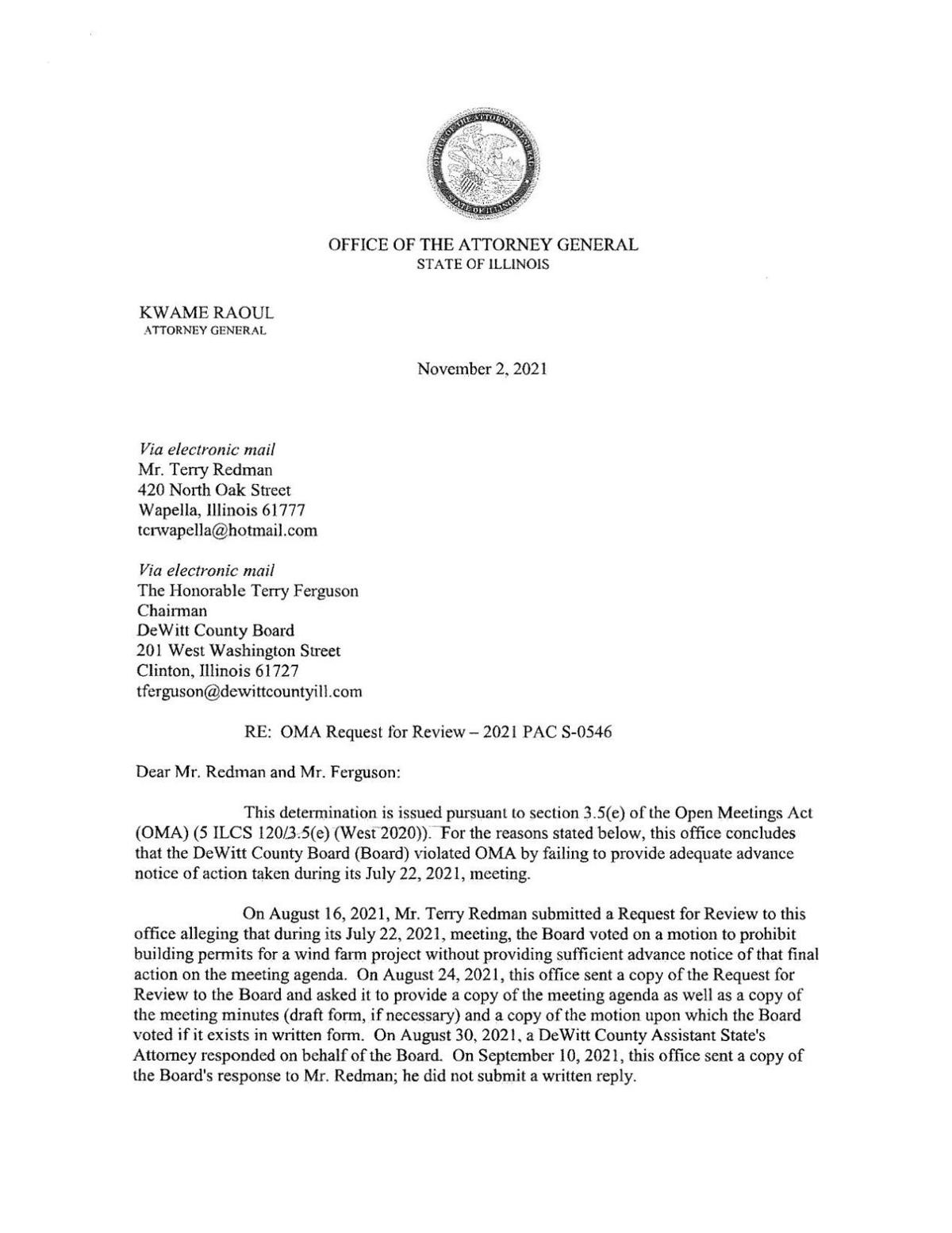 CLINTON — The DeWitt County Board violated the state’s Open Meetings Act when it voted in July to suspend the issuance of building permits for ongoing construction of a wind farm, the Illinois attorney general’s office ruled.

County board members voted July 22 to temporarily stop issuing building permits to Alta Wind Farms for the county’s first wind farm until the company provided confirmation from power companies that turbines would be automatically curtailed during severe weather.

The Illinois Attorney General’s Office said the DeWitt County Board violated the Open Meetings Act “by failing to provide adequate advance notice of action taken” during its meeting.

The July 22 DeWitt County Board meeting agenda listed the item under “Old and New Business” as “Curtailment Agreement.”

“The agenda item did not indicate that the curtailment agreement related to a wind farm project or that the motion concerned restrictions on building permits or the operation of wind turbines,” the Attorney General’s office wrote. “A person reviewing the agenda before the meeting would have been deprived of advance notice of the general subject matter of the Board’s action to prohibit the issuance of building permits.”

Sixth Circuit Judge Jason Bohm ruled about a month later that the DeWitt County Board “lacked the legal authority” to stop issuing building permits “because a county board has ‘no power to suspend, even temporarily, their own ordinances.’”

Fourteen of the 15 building permits that were in question were issued to Alta Farms the same day Bohm ruled in the lawsuit. The last permit named in the lawsuit was later issued prior to the judge’s deadline.

The 200-megawatt wind farm was approved on a 6-5 vote by the DeWitt County Board in July 2020. Plans show the wind farm will consist of 66 turbines in three northwestern townships near Waynesville and Wapella.

The Attorney General’s office did not require any further action, but it recommended that “the (county) Board be mindful of its statutory obligation to include on its meeting agendas the general subject matter of all topics of final action.”

From the Archives: Thanksgiving through the years in Bloomington-Normal

Pikachu leads a group of balloons

Thank you, Thank you!

Be sure to attend the Revival

Pumpkin Pie and the Puritan Thanksgiving

What is Significance of Thanksgiving 1942

Our Three Stores Will Be Closed

A recommendation and presentation are expected to be made at the county’s Dec. 1 Finance Committee meeting.

Fourteen of 15 building permits for the DeWitt County wind farm that were contested in a lawsuit were issued the same day a judge gave the zoning administrator three days to decide to issue or deny them.