Become a Member
Read Today's E-edition
Share This
8 seats on McLean County Board to be decided Nov. 3
0 Comments
Share this 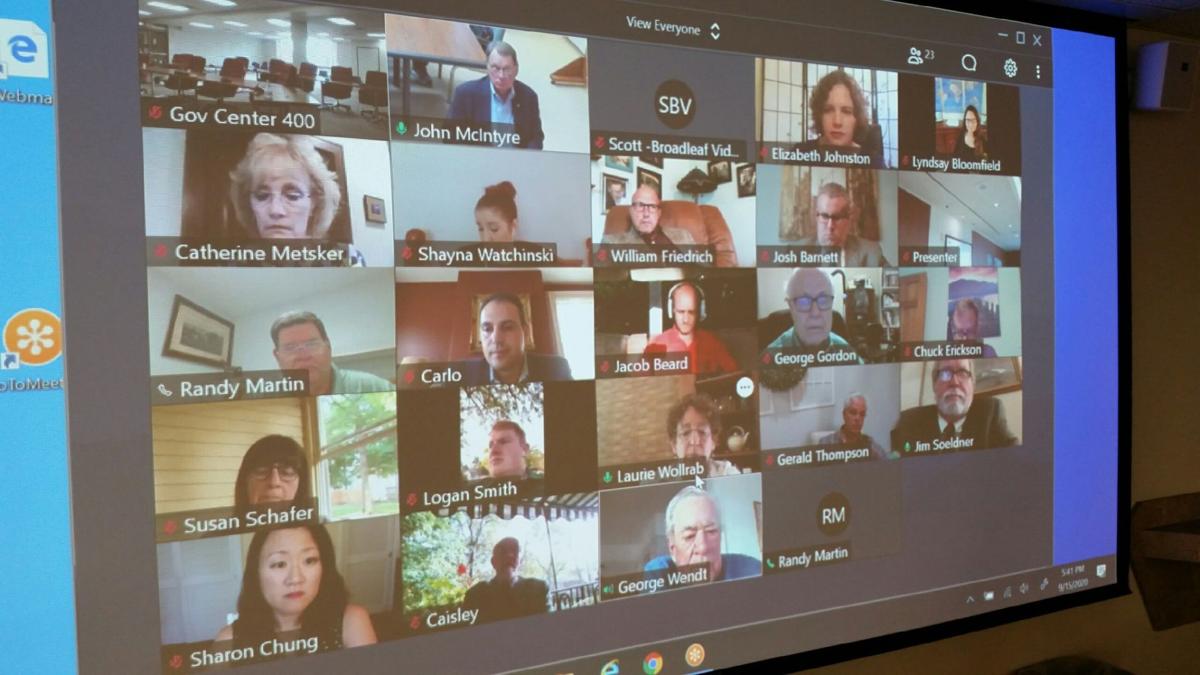 McLean County Board members meet virtually and at the Government Center on Sept. 15 as they hear an overview of the tentative county budget for next year.

BLOOMINGTON — Eight of the 10 McLean County Board districts have contested races this fall.

“I am running to give everyone in our district their own voice,” Bertrand, of Heyworth, said. “When I decided to run I had to Google my opponent as I did not know who he was. That is not representation. That is resting on the ideal that you will always make 60% of people happy with your vote.”

Friedrich, a Heyworth farmer, was appointed to the District 2 seat in July 2019.

Democrat R.J. McCracken says his top priority will be ensuring transparency in all of the board and committee meetings that are open meetings in McLean County.

“I will advocate for and push for live streams of these meetings, not just the monthly county board meeting, as well as upgrades to our technology to make our website more user friendly, continued resources for live streaming and maintaining the county social media platforms, updating the public comment policy, and doing everything possible to make our government more inclusive and accessible for citizen participation,” he said.

“I am running to help demonstrate how government should be more local and less polarized,” he said. “All government should have the most power at the most local level and should not have the top down approach that it has currently. I believe in personal freedom and the responsibility that comes with that. I am pro-Liberty, pro-Small Business, pro-Justice reform and pro-Community.”

Wendt, a Republican, has served for 12 years on the McLean County Board.

“I have consistently voted against any property tax increase,” Wendt said.

In District 4, Republican William Caisley will retire from the board. Republican Adelita Cruz and Democrat Benjamin Webb are battling for his seat.

“I believe I have an obligation to share my time and talent with others to help make our community better,” said Cruz, an employee of State Farm. “I will utilize my experience in leadership, staffing, budgeting, and short- and long-term strategy to ensure McLean County remains a great place to live and work. As a county board member, I will focus on veteran services, mental health services, and transportation.”

Webb, the 2018 Democratic candidate for Illinois' 105th House of Representatives, lives in Normal and teaches English and theater at University High School.

In District 5, John McIntyre of Normal, who has been County Board chairman since January 2016 and has been on the board since 2008, will face Democrat Rachael Lund and Libertarian Jo Ann Litwiller.

McIntyre, who also served on the board from 1980 to 1986, co-wrote the County Board Mental Health Action Plan in 2015 and has a master's degree in counseling, said he would like to continue to work to put that plan in effect, especially providing services to help the homeless and psychiatric and counseling services for youth.

“Being Chairman of the McLean County board is important to me, and it is important to the well-being of our county,” he said. “The County Board Mental Health Action Plan, financial stability of McLean County Nursing Home, and cost-effective county services are just a few of the things I will continue to improve.”

“The board needs a fundamental mindset change before making decisions that will impact our community for generations to come,” Lund said. “I am the candidate best suited to represent the long-term interests of the people in District 5 and I am committed to investing my time and talents to make McLean County an even better place to live for everyone.”

Litwiller says she is concerned about property taxes in McLean County.

The board’s longest-tenured Democrat, George Gordon, lost the primary election in District 6 to Hannah Beer, who graduated in May from Illinois State University after majoring in political science and minoring in history. Gordon served six terms on the county board and retired from ISU as a professor of politics and government.

“I feel like students have an important voice that needs to be heard,” Beer, said. “I felt like they weren’t being represented and I feel like I could do a good job connecting with students and being an advocate for them.”

There are three competing for the seat in District 7, currently held by Republican Jacob Beard who is seeking to retain that seat. Opposing him are Democrat Val Laymon and Libertarian Darin Kaeb.

“I believe our community is best when decisions are made locally, when there are strong civic institutions, and when we listen and work to solve the everyday problems that face us,” Beard said.

“I believe in promoting policies that put people first,” Laymon said. “It’s time for equity in our health and justice systems. The County Board should not be in the position of profiting from its citizens’ misfortunes, as it currently does with the McLean County Jail videoconferencing contract. It should also consider ending cash bail for non-violent offenders.”

“I am not your typical politician,” Kaeb said. “I want to listen to the people I am to serve and do my best to ensure a fair government for all.”

In District 8, Republican Jordan Baker and Democrat Lea Cline are battling for the open seat formerly held by Democrat Carlo Robustelli, who moved out of state.

“I am running on a platform of economic opportunity, fiscal responsibility, supporting local businesses, and government transparency,” Baker said.

Cline, who has filed to fill the vacant seat, describes herself as pro-small business and pro-community.

"Working as a faculty member at ISU has made me keenly aware of the difficulty that many of our residents, both youth and adults, face when seeking adequate, long-term treatment for mental health."

“I'm running for re-election to continue being the champion for systemic change to the behavioral health services in McLean County by working and collaborating with others to continue moving forward with new and innovative initiatives,” Schafer said.

“I possess the commitment, motivation, creativity and leadership skills needed to be a voice for the residents of McLean County,” Gunderson said. “I’m running for McLean County Board to bring a fresh perspective of continuous improvement and progress.”

Visit pantagraph.com to use our Illinois interactive voting guide.

This collection will be updated with election preview stories as Election Day approaches.

Watch now: McLean County's share of tax bill may remain about the same next year

McLean County property owners may pay about the same for county government's share of their tax bill in 2021 as they did this year if county board members approve a proposed budget.

Voters will be able to cast ballots at Grossinger Motors Arena on Nov. 3, according to an intergovernmental agreement approved by the McLean County Board on Tuesday night.

A Virginia energy company said it is planning to pursue a 300-megawatt wind farm project in southern McLean County. This is a developing story.

On the same day that the Illinois Department of Public Health reported the state's highest single-day increase in COVID cases — 4,015 — McLean County Health Department reported only three new cases of the virus. But the news wasn't encouraging for other Central Illinois counties.

Healthcare, the economy and the pandemic are among key issues in the 18th Congressional District race between Republican incumbent Darin LaHood and his Democratic challenger George Petrilli.

The McLean County Board will have a new look next month. In District 5, Democrat Rachael Jean Lund defeated John McIntyre of Normal.

McLean County Board members meet virtually and at the Government Center on Sept. 15 as they hear an overview of the tentative county budget for next year.