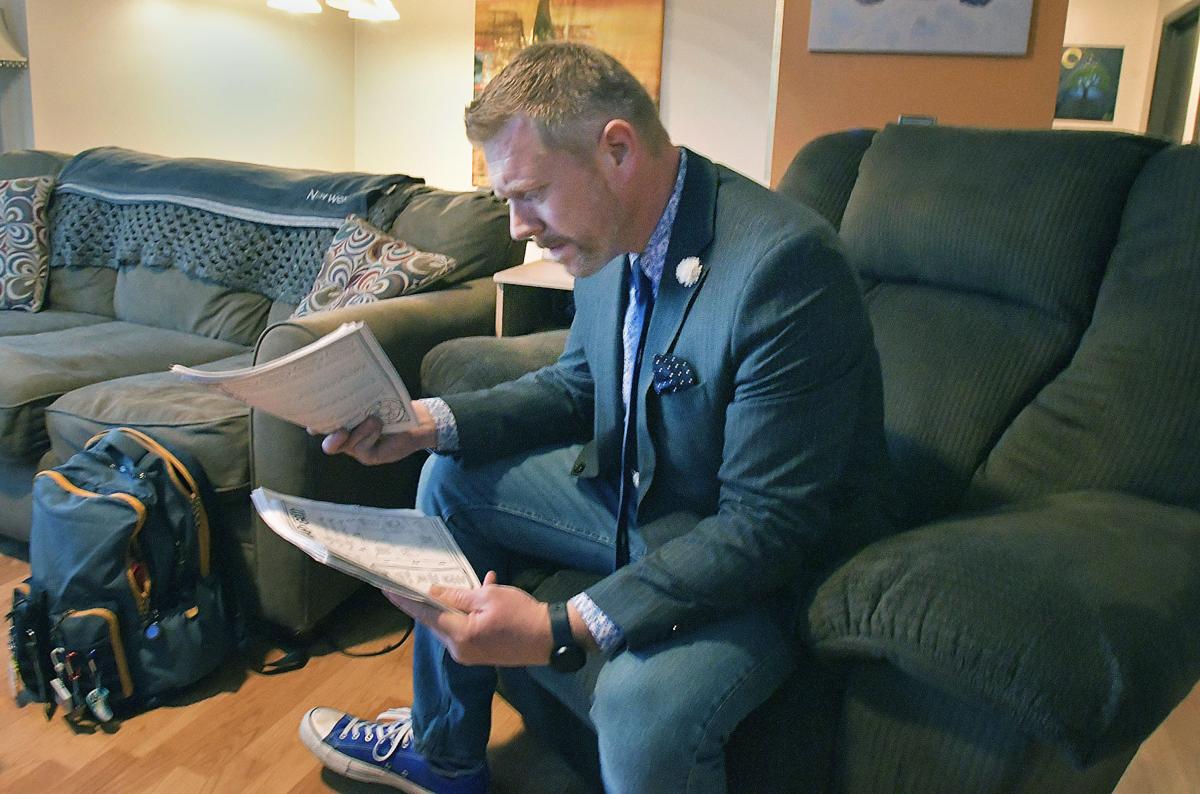 Irving Elementary School second grade teacher Tom Hopper looks over homework assignments in his home in east Bloomington on Thursday. District 87 teachers and students will have Friday off as an emergency day as the district deals with staffing issues. 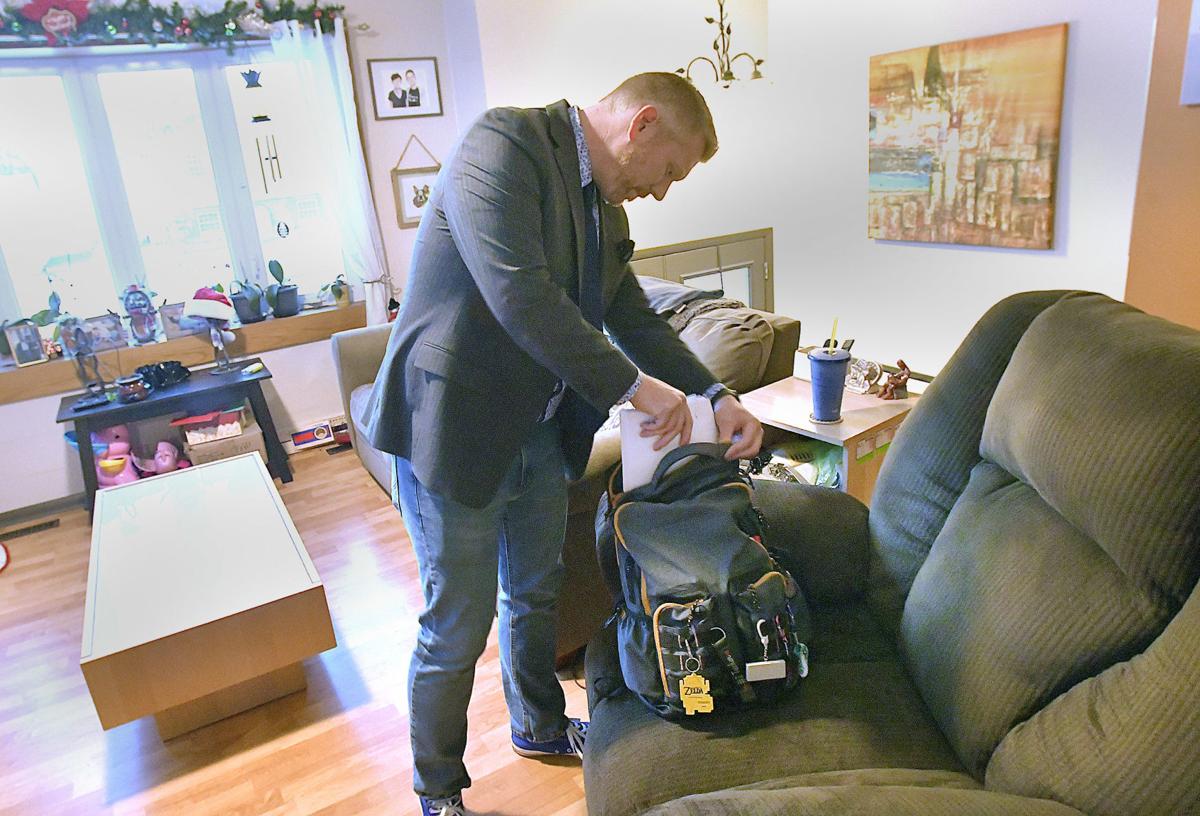 BLOOMINGTON — District 87 teachers on Thursday joined a growing list of educators across the U.S. who have had classes canceled or shifted online due to a wave of new COVID infections.

Citing an inability to fully staff because of a surge in new cases, the district announced buildings will be closed Friday.

Two other area school systems — McLean County Unit 5 and Olympia Community Unit School District 16 — also said no classes will be held Friday because of extreme cold temperatures expected. A low of 5 degrees below zero is expected.

The McLean County Health Department on Thursday reported 584 new COVID infections. There also were 104 deaths statewide, according to the Illinois Department of Public Health, the first time the mortality rate has reached triple digits since February.

The surge is being felt across the nation, as the omicron variant driving a new surge of cases.

School districts nationwide have confronted the same pandemic issues, with most opting to stay open while ramping up virus testing, tweaking protocols and other adjustments in response to the shifting pandemic.

The Peoria school district extended winter break by a week. At least six school districts in the Metro East have switched to virtual learning after the break, including Belleville Township, Brooklyn, Cahokia, Edwardsville, East St. Louis and Granite City. Mascoutah schools will close entirely Thursday and Friday, with the days made up at the end of the year.

Chicago schools on Friday will enter a third day without classes. The teachers' union and school leadership have clashed over COVID protocols.

District 87 Superintendent Barry Reilly said that positive cases and quarantines among staff and the shortage of substitute teachers contributed to the staffing problems.

The shift caused parents and teachers to adjust.

Tom Hopper, a second-grade teacher at Irving Elementary School in Bloomington, said he supports the decisions District 87 has made so far.

The father of three said that whether it’s inconvenient for his family, the decisions the district has made are in the best interests of the students. And they keep the kids and school staff healthy and safe.

“That’s what it’s all about,” Hopper said. “It has to come down to whether the students are in the safest learning environment possible.”

“I’ve known from beginning that’s where the decisions come from,” he said. “I know they’re going to continue to follow the guidance and recommendations from the people who know best.”

‘You could sense that it was coming’

Rich Baldwin, a Bloomington High School social studies teacher, said the announcement was not much of a surprise, given the number of staff and students who were absent each day.

"You could sense that it was coming," he said.

With McLean County Unit 5 going to e-learning Friday because of the weather, Reilly anticipated some District 87 teachers with children in Unit 5 would also have to be home on Friday.

"When you put it all together, it just makes sense to use tomorrow as an emergency day," he said.

The number of substitute requests has been going up, Baldwin said. He does wish that the district had gone to remote learning for the day instead, saying he felt the staff and students could have made it work.

"For us to go back to remote would not have been a hardship," he said.

The announcement made Baldwin think back to the spring of 2020 when schools started cancelling classes and going to remote learning as the pandemic spread in the U.S.

Using the emergency day pushes back the end of classes one day. Students' last day will now be May 26.

Reilly expects the district will return to in-person classes on Monday, with the weekend resolving some of the quarantine periods preventing adequate staffing.

The weather is also sending schools to remote learning, including Unit 5 and Olympia, based in Stanford. Wind chills are expected to be below zero from Thursday night into Friday morning.

Mollie Emery, a Unit 5 parent and school nurse who spoke up throughout the pandemic urging the school board and administration to keep students learning in-person, said for one day, she thinks they can work with e-learning.

“While we are definitely sad to miss school at any time, we are optimistic that we can handle the one day and thankful that Unit 5 has pushed forward with in-person learning this semester,” she said.

With a first-grader learning at home and one parent working from home as well as having a 4-year-old and being nine-months pregnant, Emery said “we aren't the only family with balancing acts going on.”

Her first-grader Aedan uses an individual education plan, which makes e-learning more complicated, Emery has said, noting he has made “phenomenal progress” being able to learn in-person this school year.

“I have already been in touch with his teacher regarding tomorrow. She knows that ‘remote’ is not a functional or realistic option for Aedan,” she said Thursday afternoon. “But for one day, I can definitely work on things like asynchronous work, or his spelling words, for example. When we have a solid foundation of in-person learning, it is far more practical to cover school for a day.”

Josh Mlot, parent of two Unit 5 students, said since he was already planning to work from home Friday, his family won’t have to make too many adjustments for the e-learning day.

“Having the kids at home makes it a little bit harder to get some work done, but at least I didn’t have to rearrange my whole schedule to do it,” he said.

The e-learning day lines up well for his oldest Hudson, a fourth grader at Prairieland Elementary, who was sick Wednesday and is waiting for a COVID-19 test result before he can return to school.

“This actually makes it easier for him because we’re picking up his Chromebook from the school today and he’s going to be able to learn remotely tomorrow as opposed to having to miss school entirely,” Mlot said Thursday afternoon.

Having both Hudson and his sister Brooklyn, a second grader at Prairieland, at home can be “a little bit more complicated” and distractions are more likely, he added.

“It’s not the ideal learning environment obviously but … I think now, I mean, we’re two years into the pandemic at this point, so we’re all kind of used to having to be able to do these things at home sometimes and having to be efficient and get stuff done in a different environment,” Mlot said.

The Unit 5 school board approved an e-learning program in December 2020, expanding the program to traditional emergency days instead of COVID-related days away.

The Associated Press and St. Louis Post-Dispatch contributed to this report.

Records from the Lincoln Climate

Traces of snow in May

BLOOMINGTON – Connect Transit is again suspending fare collection and implementing other changes in wake of surging COVID-19 cases, the compan…

Illinois continues to set records for COVID-19 cases and hospitalizations as the highly contagious omicron variant surges across the state.

Watch now: With remote learning options, 'snow days' may melt away in Bloomington-Normal

Central Illinois schools look to a future without snow days in a post-pandemic world.

'Long Story Short': Would you buy this all-black house in Lincoln?

Join reporters Kelsey Watznauer and Sierra Henry as they discuss the latest in Central Illinois news on the 'Long Story Short' podcast.

Irving Elementary School second grade teacher Tom Hopper looks over homework assignments in his home in east Bloomington on Thursday. District 87 teachers and students will have Friday off as an emergency day as the district deals with staffing issues. 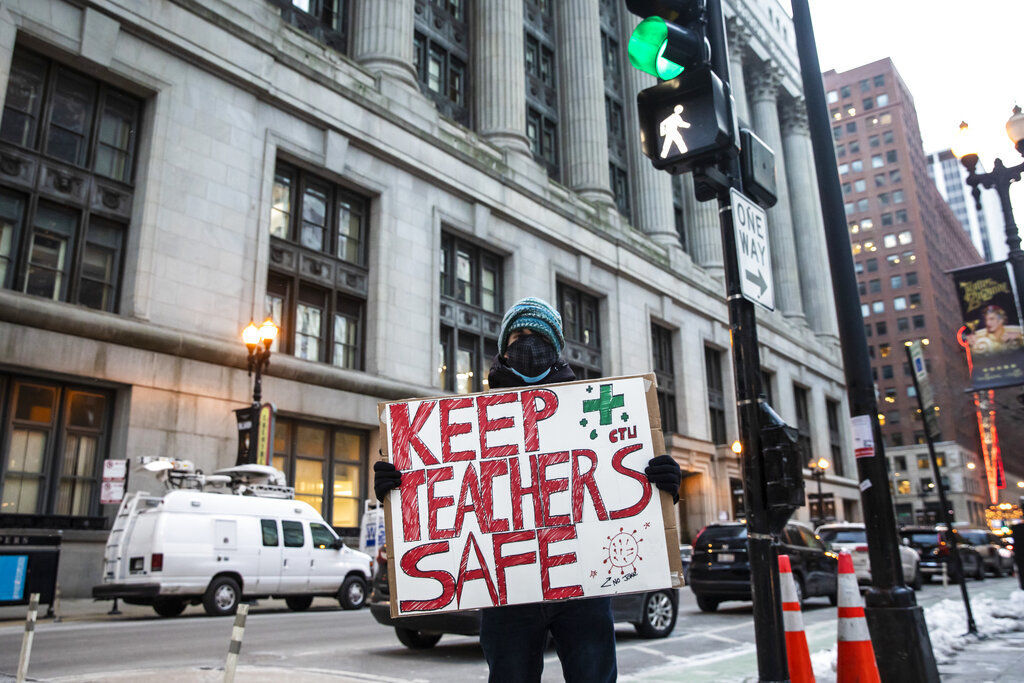 Teacher Adan Meza, 29 poses for a photo outside City Hall in downtown Chicago. The union representing teachers and the school system have been at odds over COVID plans. 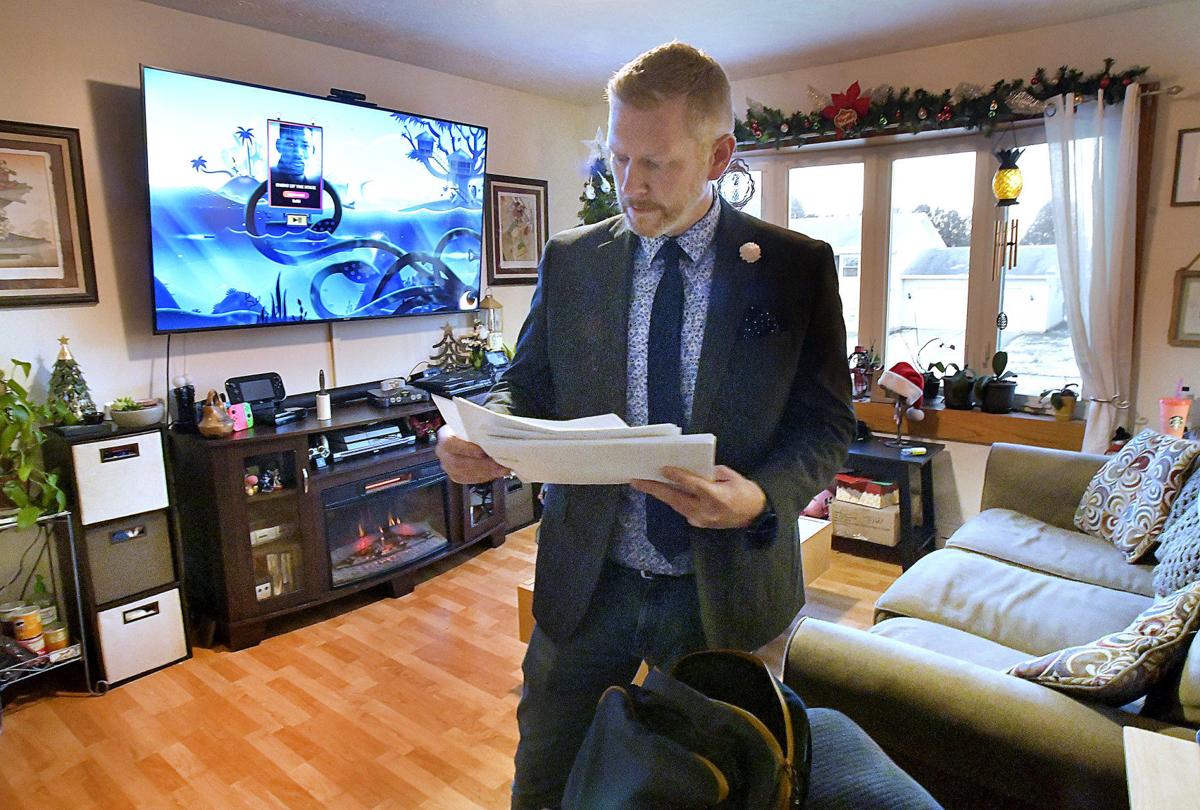 District 87 teachers like Irving Elementary School second grade teacher Tom Hopper will be able to take an emergency day off after District 87 cancelled classes on Friday, Thursday, Jan. 5, 2022. Hopper looked over students' homework in his living room in east Bloomington. 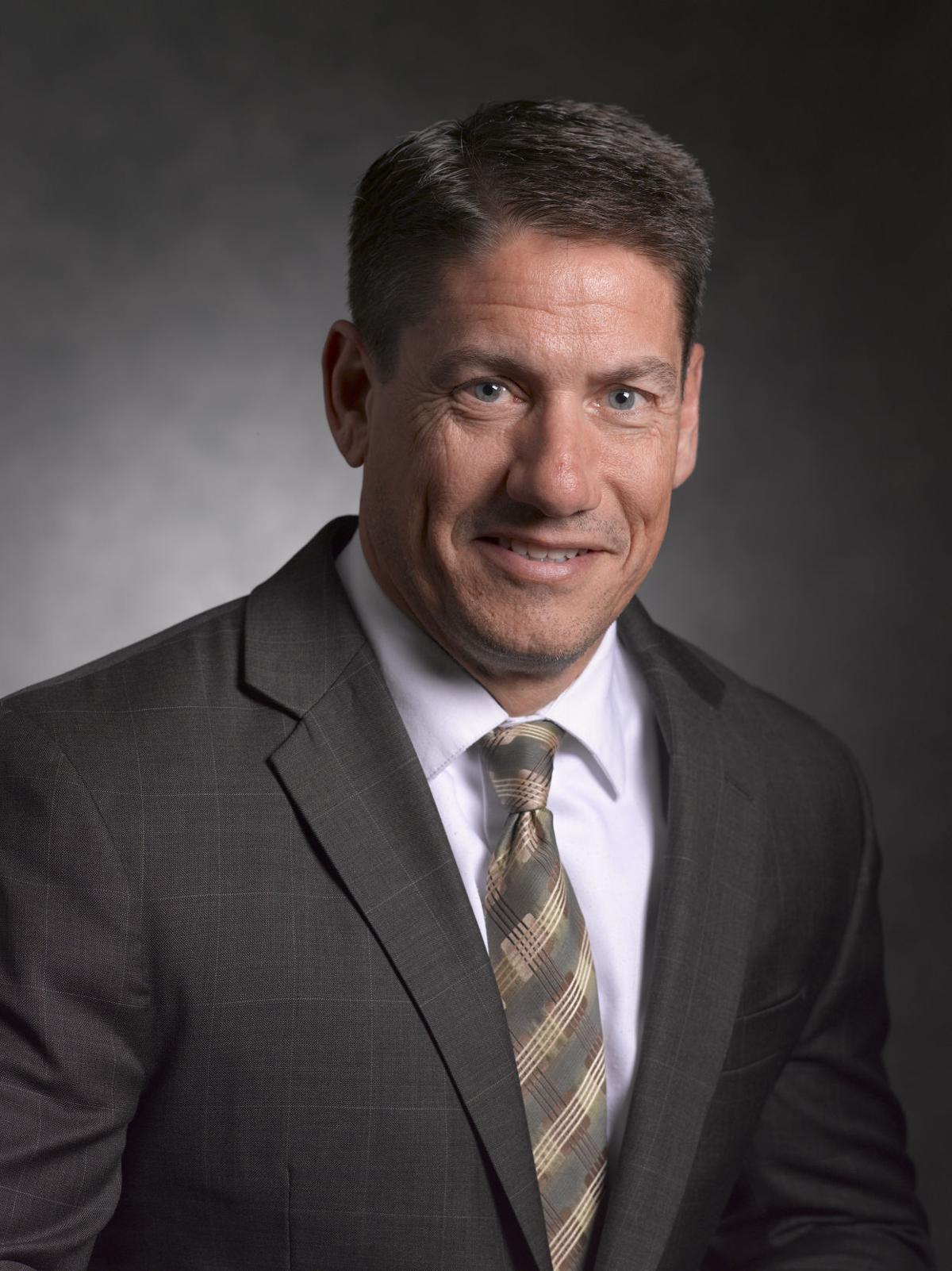