BLOOMINGTON — A line of cheering community members and a couple of Bloomington fire trucks were surprising enough for the Stevenson Elementary staff’s first day back in the classroom.

But when fifth grade teacher Melody Lim saw her husband and two children just outside the entrance to the school, she was “overwhelmed.”

“This is the last thing I was expecting,” she said, hugging 3-year-old Eli and 4-year-old Isabelle after wiping away her tears.

Lynn Shook, principal at Stevenson, invited the Promise Council’s 100 Caring Adults to help welcome the staff back to school for the first time this year, but she took the surprise a step further and asked their families and friends to join as well.

“I think it’s really important to remind our teachers that the community has their back, that they have support,” she said. “Last year was a tough year; I think this year is to be decided and I just wanted them to know that there’s a lot of people that are here to support them.”

Contacting each staff member’s emergency contacts to get them on board for the surprise was the best part of last week, Shook said.

“You are as much a part of this family as the person you have coming into the building every day. We share them with you,” she told the crowd before teachers arrived. “The fact that you all are here today to show love and support for our educators … We’re not out of the woods this year so let’s do as much as we can to support them. I promise I sure will and you guys will do it at home.”

The sidewalk outside the front doors was lined with smiling faces, clapping hands, signs, balloons and flowers. A few teachers ran to hug their families, nearly dropping their coffees and bags, when they realized they recognized their people in the crowd.

Jake Tucker, whose wife Debbie teaches kindergarten, said he and their two children Evan and Ella, “were able to sneak out and make an excuse that she didn’t catch us at, which usually doesn’t happen.”

Seven-year-old Evan held up a sign that read “Have a great year Mom” alongside Ella’s “We love you Mommy.”

Lauren Cottrel, a Stevenson media specialist, was greeted by her 8-year-old son Boden wearing a gray T-shirt that said "I call my favorite teacher Mom."

Melody Lim’s husband Kane said he tried to get creative to make sure they could join the surprise, but when he offered to take Eli and Isabelle to day care, Melody insisted she would take them.

“I didn’t push it any further because I knew she wanted to drop the kids off. So she just dropped them off and then I just went and picked them up right afterwards,” he said with a laugh.

Latrice Galloway was afraid she would cry when she saw her husband, Robert, standing in the crowd. She said she is “excited, excited, so excited” to get back to her first grade classroom this year.

This is Stevenson Elementary’s first year with the Promise Council, the volunteer organization behind 100 Caring Adults events and aims to remove barriers, meet students’ needs and ensure they graduate.

Students in Promise Council schools in District 87, McLean County Unit 5 and Olympia look forward to being greeted by the 100 Caring Adults who show up to encourage the kids as they return to school.

But the teachers didn’t see this coming.

“I think we did pull it off,” Shook said.

Unit 5 returns to class Wednesday and District 87 will be back on Thursday.

Read the numbers: District 87 prepares to vote on deficit budget

The Bloomington District 87 school board is preparing to vote on a deficit budget, but administrators say federal COVID relief money could change the final numbers.

An Equity Action Plan was unveiled at McLean County Unit 5 after a third-party audit determined the district needs “a lot more progress.”

Central Illinois parents shopping for back-to-school supplies should add face coverings to their lists, as Gov. J.B Pritzker announced Wednesday all students and staff will be required to wear masks.

Agriscience teacher and FFA adviser Liz Harris said a freshman student's excitement and curiosity led her to secure a $10,000 grant to renovate the greenhouse at Normal Community High School.

McLean County Unit 5 students went back to school Wednesday after three semesters in and out of remote learning. Adult volunteers showed up to make the day extra special.

Watch now: District 87 students get cheering welcome on first day back to school

Bloomington District 87 elementary students went back to school Thursday, and though some parents were nervous, the kids were ready to be back.

One winner in Bloomington-Normal will spend a weekend with a Tesla as part of the Bloomington dealership’s partnership with Crunch Fitness to provide backpacks to the Boys & Girls Club.

Watch now: Catch a view of Venus in the night sky 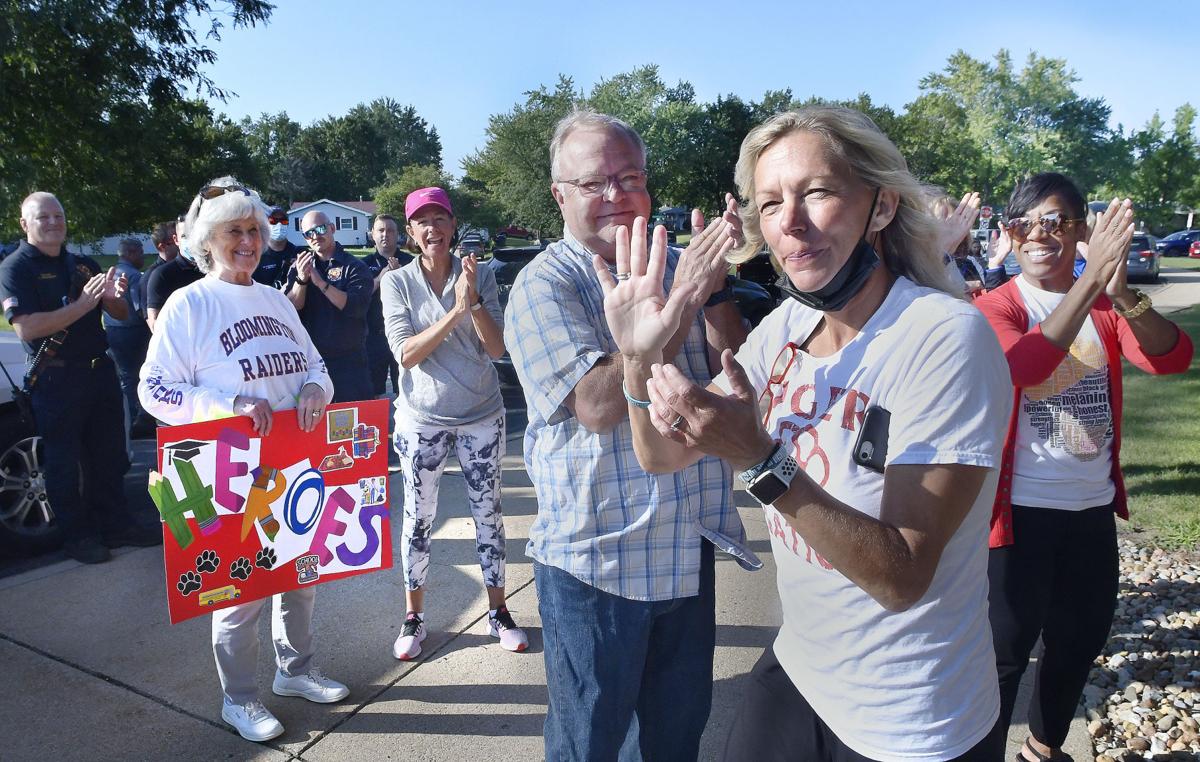 Community members welcome Stevenson Elementary School Principal Lynn Shook and about 70 other teachers and staff on Monday. “This is the last thing I was expecting,” said teacher Melody Lim. 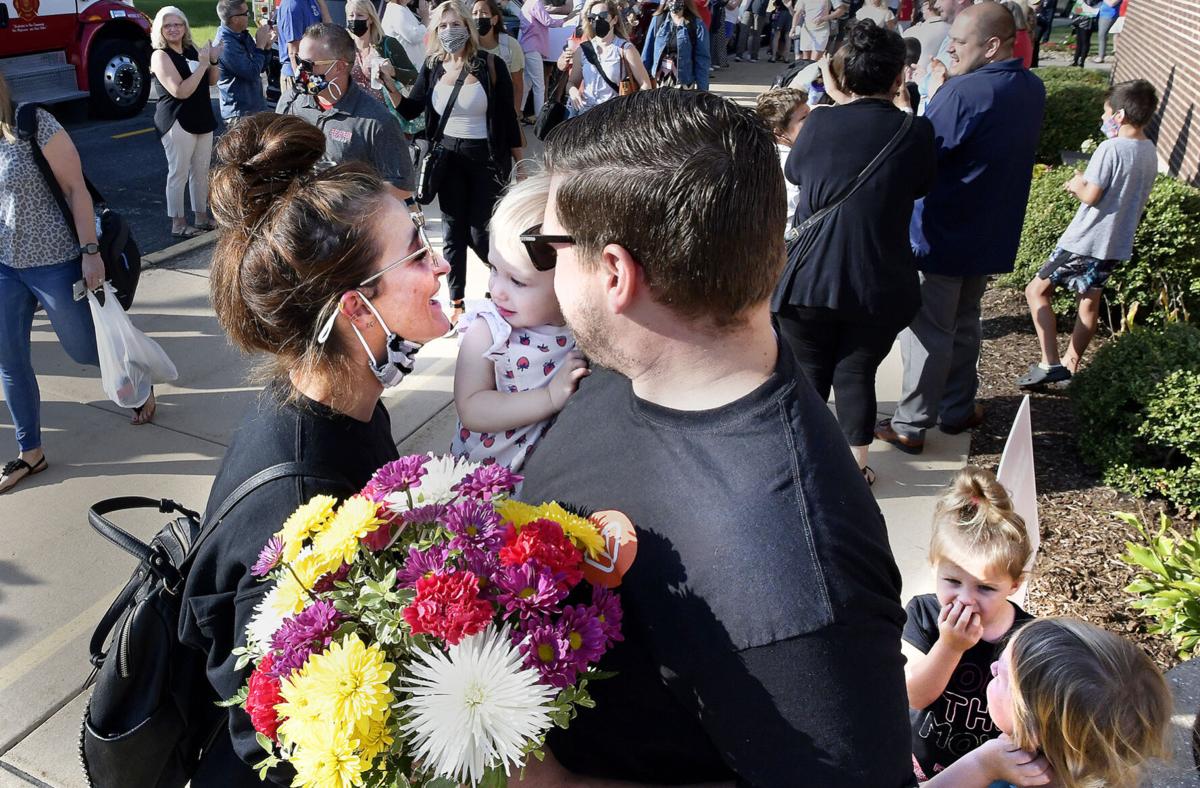 Stevenson Elementary third-grade teacher Whitney Wilson, left, is welcomed to work with flowers from her husband, Jacob, and daughters Jessa, 1, Harper, 2 and Remmington, 4, as the community welcomed teachers back to school on Aug. 16. 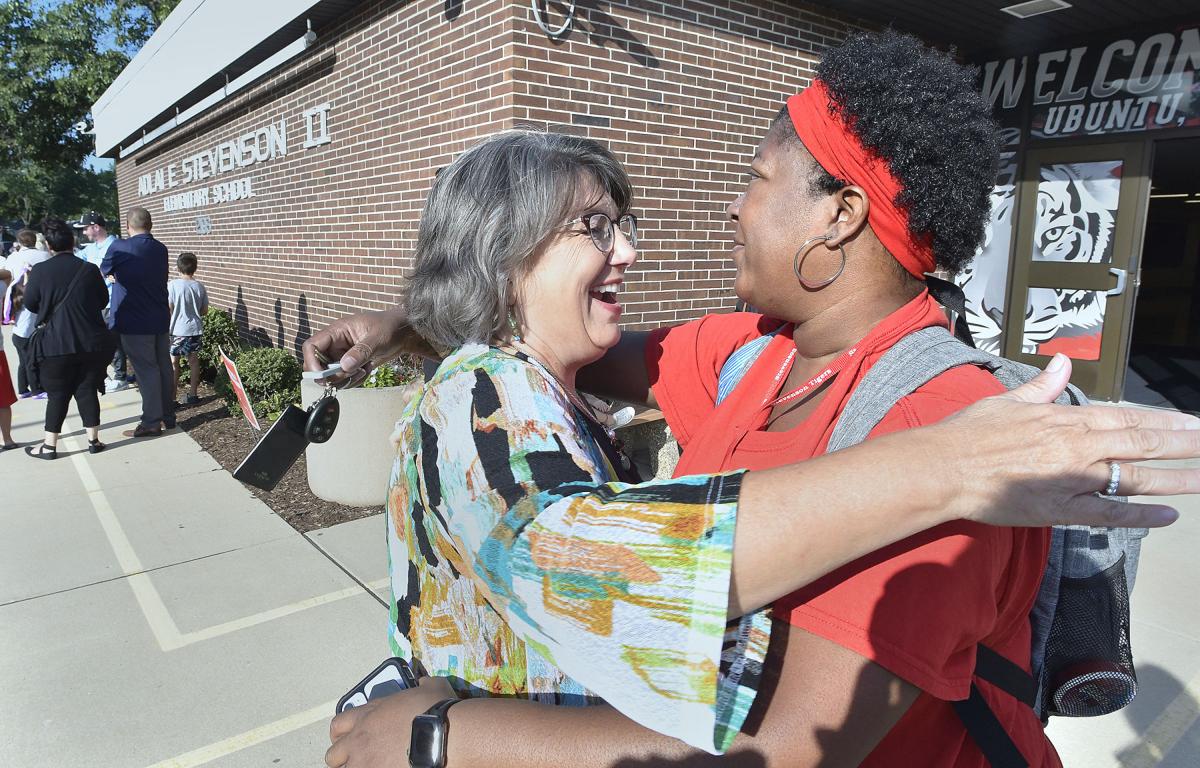 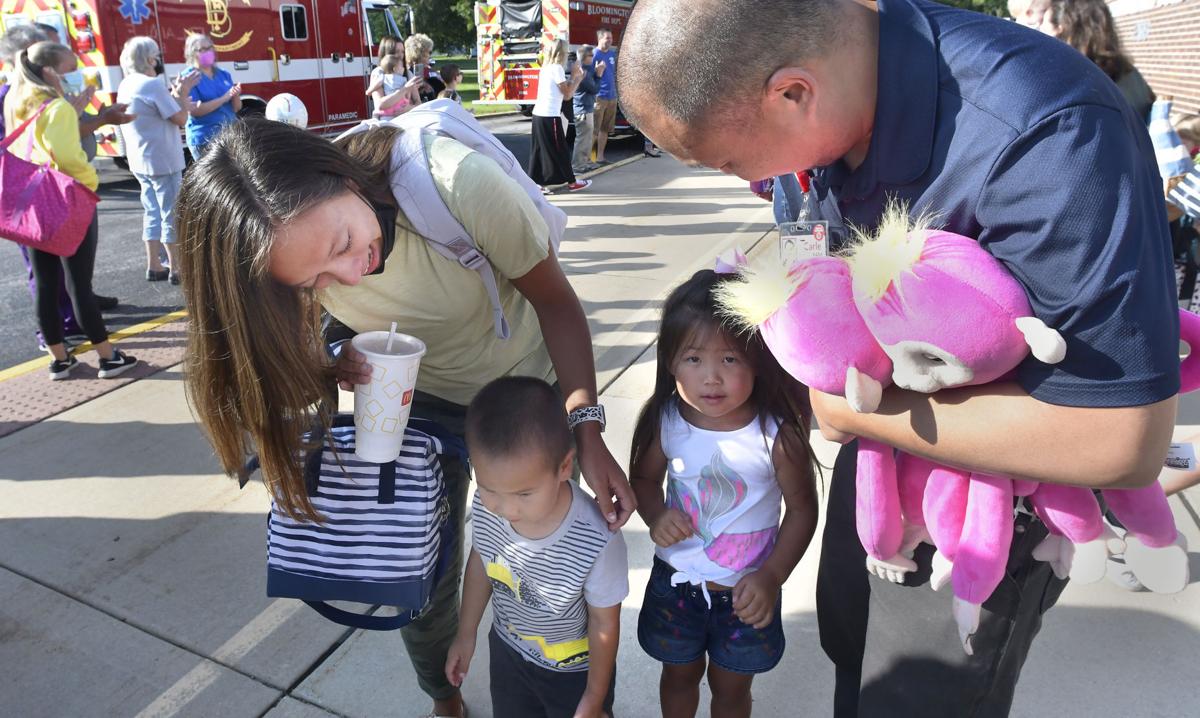