The sanctions come after the association delayed official action over the summer after issuing a report on the alleged problems in May. 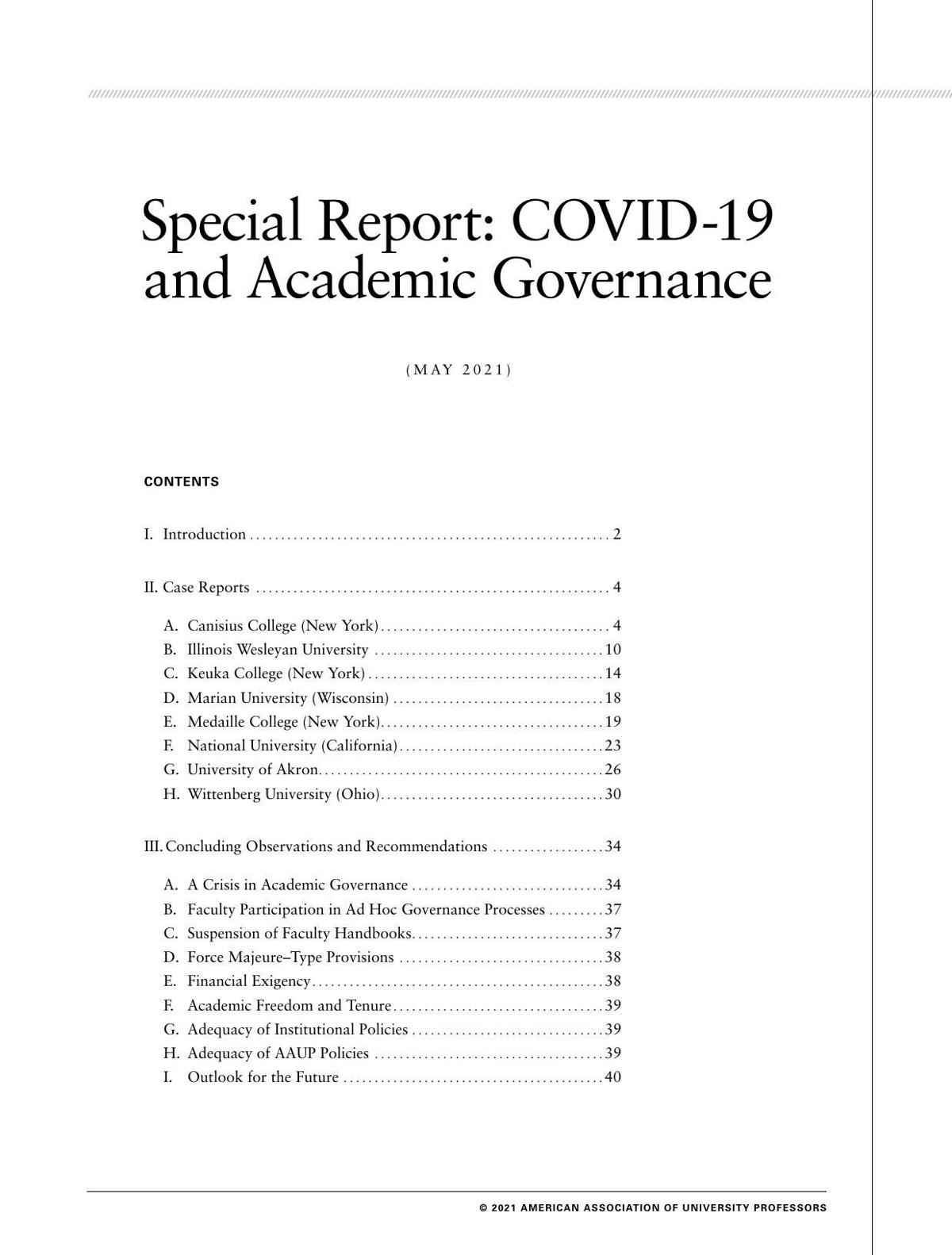 The university disagrees with the sanction, saying it adhered to the AAUP's guidelines and provided detailed responses to the investigation, President Georgia Nugent said in an emailed statement to The Pantagraph.

“We regret that there is disagreement over the university’s efforts to respond appropriately to the changing environment of high education,” she said.

Wesleyan’s board voted in July, 2020, to eliminate the anthropology, religious studies, French and Italian programs. It had voted to eliminate the American culture studies; design, technology and entrepreneurship; Greek and Roman studies; and international business programs in May 2020.

The moves prompted widespread backlash from faculty and students, especially those in the humanities.

Nine tenured faculty members faced potential termination due to the second set of cuts. All but one professor had agreed either to move to tenured positions in other departments or to retirement or separation agreements by the time the report was published.

Over the summer the last faculty member whose situation had not been resolved reached an agreement with the university to retire as a professor emeritus, university spokesperson Ann Aubry said. 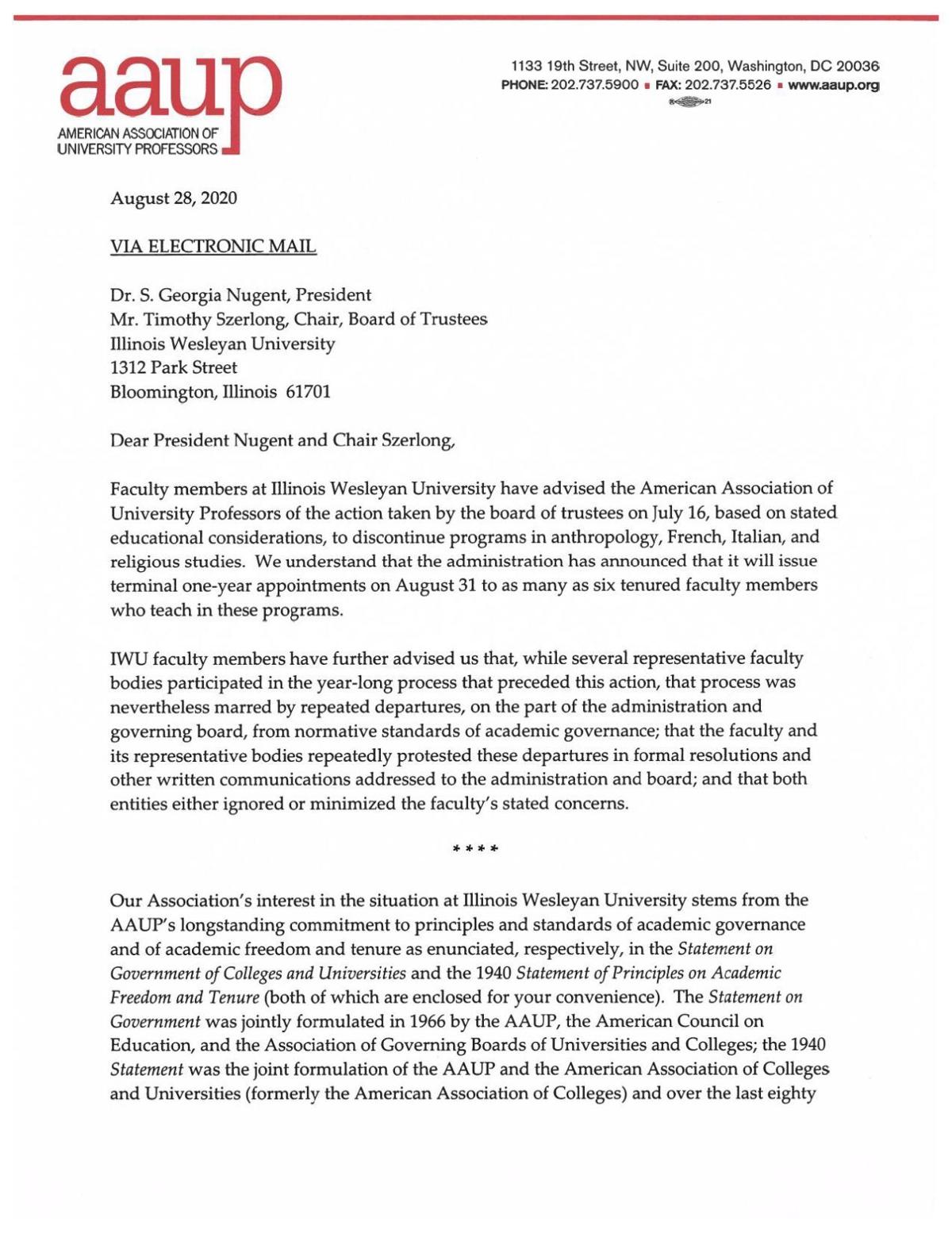 Earlier this school year, music professor Seyeon Ahn also voiced concerns about how the university was handling her potential dismissal after she refused to teach instrumental music classes in person, citing the dangers posed by the pandemic and what she said were inadequate safety precautions.

Institutions which receive sanctions have shown problems either with bad policies or with the existing policies not being implemented with proper respect for all parties involved, he said.

In its press release, AAUP cited multiple alleged violations of shared governance principles in the decisions around the ending of the four programs. The process showed a disregard for faculty voices, Scholtz said.

“The process that we’re looking for is one in which the faculty is taken seriously,” he said.

The university has maintained that it did not violate norms and guidelines in its process.

“Illinois Wesleyan remains committed to continuing collaborative efforts with our campus community to enhance the vitality of liberal arts education. The AAUP’s decision carries no material consequences for the university,” Nugent said.

AAUP staff members reach out to the sanctioned universities about once a year, Scholtz said. Improvements in policies or the atmosphere between faculty and administrators can lead to a vote to take the school off the list.

“We’d like that list to be small, we are very eager to get institutions off these lists,” he said.

Gil’s Country Inn, a longtime, family-owned restaurant in Minier, closed in 2013 after the economy took its toll. The restaurant was particularly known for its fried chicken.

Lancaster's Fine Dining, 513 N. Main St., a downtown Bloomington mainstay for nearly 16 years, closed its doors in August 2014. A struggling economy and the upscale restaurant's location in a neighborhood of bars were factors.

Bennigan's, which billed itself as an "Irish American Grill & Tavern" closed its Normal location in July 2008 after the chain filed for bankruptcy. The eatery, 115 S. Veterans Parkway, was replaced by Wild Berries, which was later closed and razed. Owner Tartan Realty Group of Chicago now plans to build a four-unit development at the site.

Lox, Stock & Bagel closed in May 2004 after 22 years at Normal's College Hills Mall, in tandem with the mall's conversion to the Shoppes at College Hills.

Zorbas, popular for serving Greek food, gyros and breakfast, closed in 2015 after its location at 603 Dale St., Normal, was sold to a developer. The eatery first opened in 1983 around the corner at 707 S. Main St.

The historic Grand Hotel, 1201 E. Emerson St., Bloomington, once served as a winter training quarters for a number of circus acts and was converted into a restaurant in 1937. The property was foreclosed upon by Pontiac National Bank in 2001, sold in 2002 and demolished a few months later.

The Mr. Quick restaurant at Clinton and Washington streets had its grand opening in January 1966, with burgers starting at 15 cents and coffee for a dime a cup. The restaurant closed in 2001 and the city of Bloomington later bought the site and razed the building so it could widen the intersection.

Chicago Style Pizzeria, 1500 E. Empire St., Bloomington, closed in 2015 after 22 years in business when owners Abe and Ruth Taha (Abe is pictured above) decided to retire.

Shannon's Federal Cafe, 105 W. Front St., opened in 1997 after its owners took over the historic Federal Cafe in downtown Bloomington, which closed two years earlier. Shannon's closed in 2004 because the owners also ran Shannon's Five Star Restaurant, and the demands of both businesses were too much.

Damon's - The Place for Ribs opened in 1995 at 1701 Fort Jesse Road, Normal. The eatery closed in 2006 after business had declined; the site is now a CVS pharmacy.

Australian-themed Ned Kelly's Steakhouse opened in May 1992 in what was the former location of Bob Knapp's in the Brandtville Center (now known as Morrissey Crossing).  It closed in August 2007 after the company's four Central Illinois locations were unable to compete with bigger chains.

Arnie's was a popular Twin City eatery for 25 years. Located at the Bloomington airport terminal, it closed in 2003, shortly after the Central Illinois Regional Airport moved to its current location about a mile east. A subsequent restaurant, Arnie's Etc., was open for about a year in the former terminal building, until it closed in 2005.

Diamond Dave's, a mainstay at the former College Hills Mall for 21 years, closed its doors in June 2004 in tandem with the gutting of the mall to create what is now the Shoppes at College Hills.

Jerry's Grille opened in 1999 in Bloomington's Brandtville shopping center, taking over the spot used by another eatery, Henry Wellington. It closed it 2005 and then became Goodfellas, which also closed.

After 33 years in the heart of Normal, Golden West closed in 2002, after the owners received a surprise offer for the site and decided it was time to sell.  The building, 712 S, Kingsley St., was later resold to Tartan Realty and demolished in 2003.

After eight years at 407 N. Hershey Road, Bloomington, Ming's closed in 2012. The eatery was facing foreclosure at the time.

The former Central Station restaurant in downtown Bloomington, once a firehouse in days gone by, is now home to Epiphany Farms Restaurant and Anju Above.

Chevys Fresh Mex, 704 S. Eldorado Road, Bloomington, closed in 2011 after being open nearly nine years. The site has also been home to several other restaurants, including a House of Hunan, Shakey's Pizza and Butterfields.

The Caboose, a historic Bloomington eatery at 608 W. Seminary St., closed without fanfare in February 2012.  The restaurant, with several owners and names including Chuck's Caboose and Barney's Caboose, had been a west-side fixture for more than 60 years.

Delgado's, a popular Mexican restaurant at 201 Landmark Drive, Normal, closed in May 2005 after after 24 years in business. It is now the location of Los Potrillos.

A chance meeting at the Ronald Reagan birthplace in Tampico led Eureka College student Sean Sandrock to an experience that has change how his is planning for the rest of his life.

Bloomington District 87 has announced the board of education plans to name David Mouser as its next superintendent. Mouser is superintendent at Tri-Valley CUSD No. 3, based in Downs.

Bloomington High School students had a chance to learn more about the Holocaust and intolerance more broadly during a visit this week by the Mobile Museum of Tolerance. The visit challenged students to think about ways they could oppose discrimination in their own lives.

A court hearing is set for Thursday afternoon in Woodford County for six McLean County Unit 5 employees who filed a lawsuit last week against the district's Board of Education over the mandate to be vaccinated against COVID-19 or test weekly.

Eureka College, Eastern Illinois University and Illinois State University are three of 24 colleges and universities that have volunteered to help the state create plans to better recruit and retain future teachers of color. 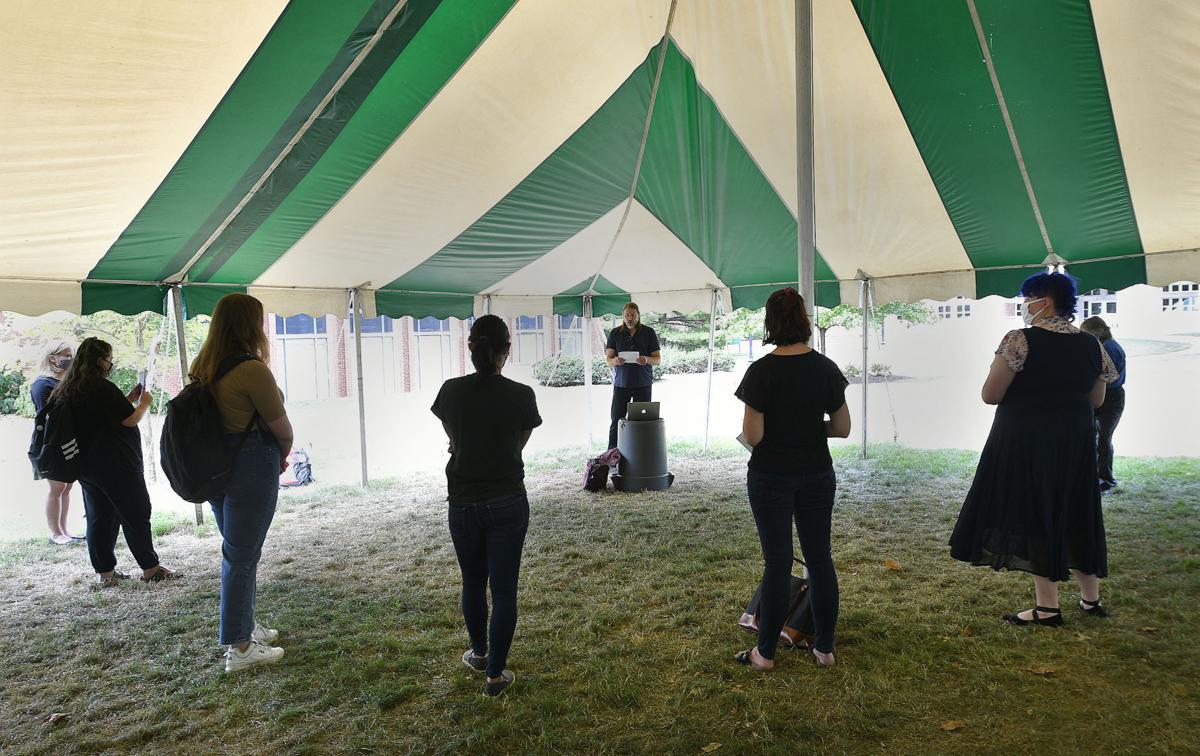 Illinois Wesleyan University professor Mike Theune presents student speakers who appealed for preservation of the humanities at the school during a public rally under a large tent on the quad Monday, Aug. 31, 2020. 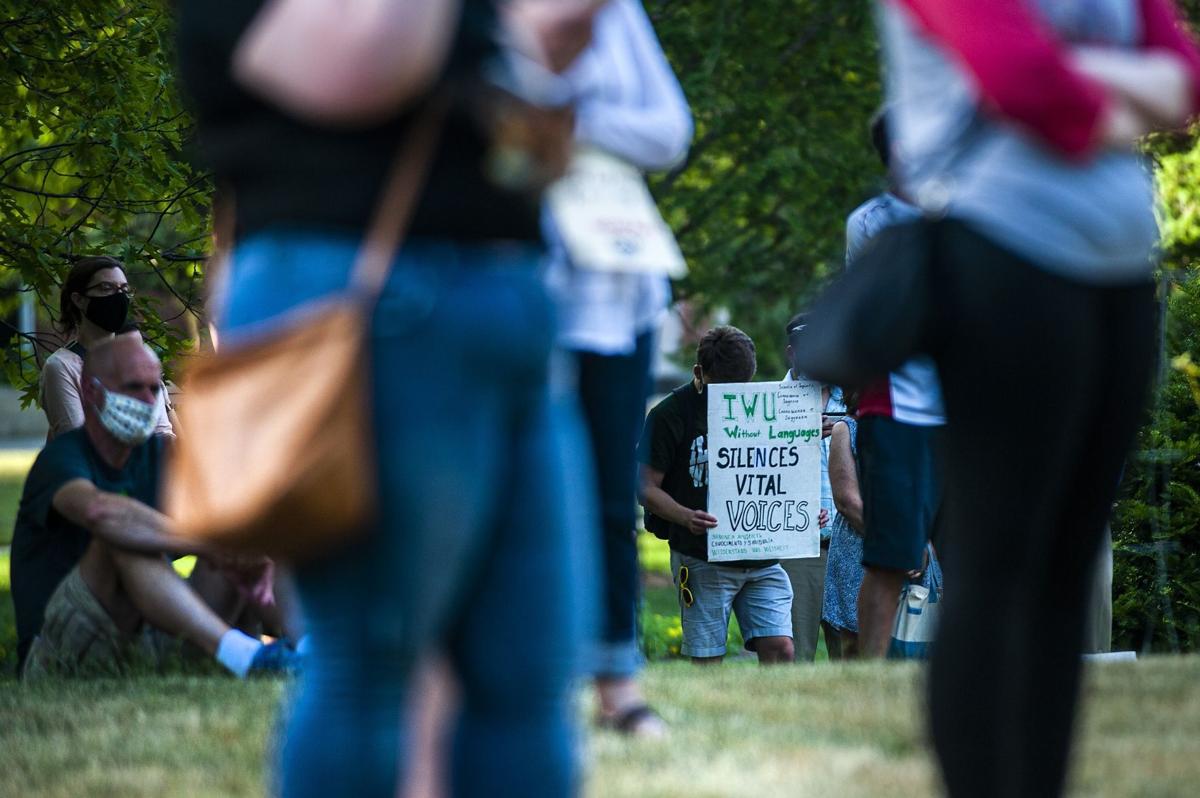 A sign is held by an attendee to "Standing Up for the Liberal Arts" on Illinois Wesleyan University's campus in Bloomington, on Wednesday, July 1, 2020. The event was held in response to proposed cuts to programs at IWU, which led to a sanction on the school by the American Association of University Professors.