Illinois Wesleyan University professor and ensemble conductor Seyeon Ahn faces possible termination at the school after refusing to teach rehearsals in person. She says that the rehearsals cannot be safe to prevent the spread of COVID-19 nor comply with the school's and state's mask mandates.

BLOOMINGTON — An Illinois Wesleyan University professor and her fiancé face disciplinary actions after protesting what they say are inconsistencies in the school's COVID policies.

Seyeon Ahn, director of the symphony orchestra and wind ensemble, was placed on administrative leave with pay pending a termination hearing. Ahn said the issue is over her raising concerns about having in-person rehearsals, which she finds to be unsafe and counter to the state and school mask mandates.

The university declined to comment on Ahn’s employment, citing confidentiality on personnel matters. 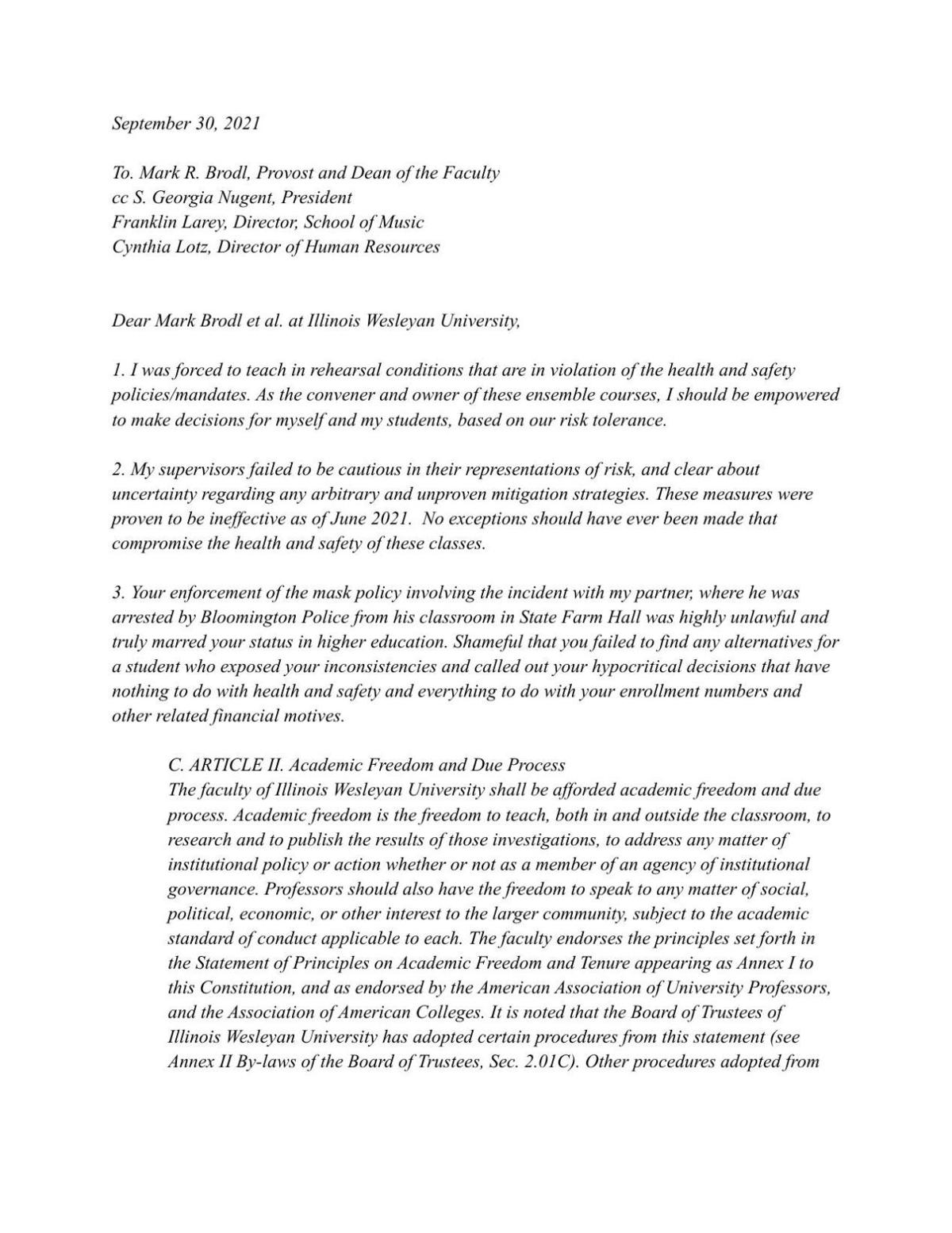 Ahn led rehearsals in person all of last year and had started to this year, she said. With the new mask and vaccine mandates put in place by the Gov. J.B. Pritzker on Aug. 26, she canceled rehearsals scheduled for the next day.

IWU had already implemented an indoor mask mandate for campus, including it as part of the Titan Pledge. The pledge is a commitment students have been asked to make to take mitigation measures against the pandemic.

"They say campus-wide but it's not; we were the exception," Ahn said.

Ahn refused to teach in person after the canceled rehearsals, saying the precautions suggested were not enough to protect her students or herself. The university was being hypocritical in requiring the rehearsals to continue despite the unsafe conditions and the mask mandate, she said.

Playing wind instruments produces a lot of aerosols which can spread COVID and requires more spaced social distancing than the standard six feet, she said.

On Aug. 30, the school announced it would allow professors teaching in rooms where social distancing was not possible to move to hybrid or virtual classes for two weeks. The school had seen more than 60 COVID cases on campus by then.

Ahn submitted a plan to move the ensembles to virtual learning but was told it was not an adequate substitute for in-person rehearsals, she said. At the same time, she was suspended from teaching her ensemble courses, but continued to teach her conducting course, which met virtually until Sept. 20.

Ahn provided The Pantagraph with a Sept. 30 email sent by the university outlining that she would be suspended and that a hearing would be scheduled.

The suspension letter cites Ahn’s failure to resume rehearsals as the reason for the grievance against her, as it puts her below the required course load. She had been asked to resume in-person rehearsals by Sept. 22.

She does not believe the safety measures the school recommended, including social distancing and Plexiglass dividers, were adequate.

“We have no mitigation measures that are proven. The students were in disbelief,” Ahn told The Pantagraph.

Ahn said she should have the power to decide the safety measures taken, and that the school’s recommended safety precautions were ineffective. Her letter includes the school's policy on academic freedom and due process.

Ahn is in her second year as a professor at Wesleyan, after graduating with a doctor of musical arts from the University of Kentucky in 2020. She has been a guest conductor at various youth and professional orchestras across the country.

In her response to the suspension, Ahn referenced a trespass charge against Scott Malek, 41, her fiancé who also attends classes at Wesleyan. Malek has posted videos to YouTube showing him being escorted out of a classroom in handcuffs by Bloomington police.

He had attended class without wearing a mask and refused to put one on or leave when asked. On his YouTube channel, he argues that the executive order mandating masks is not a law so cannot be enforced, and that he has a right to be on campus as a student.

Malek had decided to attend classes mask-less to draw attention to the unsafe conditions in the ensembles, Ahn said. He was arrested for not following the mandate, but the ensembles were still expected to gather in person without masks.

Ahn said he was arrested and booked, and she had to bail him out. Court records show a 10% bond of $150 was paid on Malek’s case on Aug. 30. He has been charged with misdemeanor criminal trespass.

Vice President for Student Affairs and Dean of Students Karla Carney-Hall said she could not comment on specifics of student conduct matters. Potential consequences for violating the university's COVID-19 polices are included in the Titan Pledge.

Ahn said Malek had not agreed to the Titan Pledge when he was admitted to the university and did not sign it when requested before the school year began.

"It just seems so harsh," Ahn said of Malek's arrest.

‘We know that not everybody is on board with it’

The issue of mask use and COVID policies has been ongoing at schools since the start of the pandemic.

Illinois State University students and employees who are found not complying with the mandates are subject to the student conduct process and the normal human resources grievance process, ISU spokesperson said Eric Jome earlier this month.

Those who are unvaccinated and out of compliance by not submitting weekly test results will receive email reminders, Jome said.

The school has had to send out some non-compliance letters, he said. Overall people seem to have gotten into the routine of wearing masks around campus, though ISU acknowledges that might not be true across the wider community.

“We know that not everybody is on board with it,” Jome said.

On Friday, Wesleyan reported its first positive test since Sept. 14.

Carney-Hall said fewer than five students have told Wesleyan they won’t be coming back because of the mandates. No employees have resigned citing the mandates, said Director of Human Resources Cindy Lotz.

Other conductors taking over

Meanwhile, in-person rehearsals have resumed for Wesleyan's ensembles under other conductors, Ahn said.

Wesleyan worked with faculty members in cases where wearing masks would interfere with learning, said spokeswoman Ann Aubry. That included implementing guidelines from the Illinois Department of Public Health, National Association of Schools of Music, Centers for Disease Control and Prevention and the NCAA.

“Fortunately, the vast majority of our IWU community supports this policy and has adhered to these expectations, with very rare exceptions,” Aubry said in an email.

IDPH guidance for music schools recommends that wind instrument players wear a mask when not playing. The department also says instruments should have bell covers.

Ahn said she had seen studies that bell covers are ineffective and that they did not make her feel more comfortable in the rehearsal space. She had tried to find a larger rehearsal space for the time slots the ensembles met, but was unable to find one that was not already being used.

“We are not even distanced two feet in our class,” Ahn told The Pantagraph.

For the orchestra, all string players and percussionists are required to wear masks during rehearsals, as are wind players when they are not actively playing, Aubry said. So is the ensemble director. The players are also socially distanced, she said.

There are still plans in place for choral and symphony concerts, Aubry said. The audience members will be required to wear masks and there will be limits on the size of the audience.

Ahn’s hearing is scheduled for Nov. 12.

Illinois Wesleyan University is eliminating four programs but the board is continuing review of other recommendations from a program evaluation task force, including the future of the School of Music and School of Art.

It was the sort of scene you don’t see every day: a lawn full of pianos at Illinois Wesleyan University.

The Chicago Bears are continuing preparations for Sunday’s game in Tampa, Fla., against the reigning Super Bowl champion Buccaneers. Coming of… 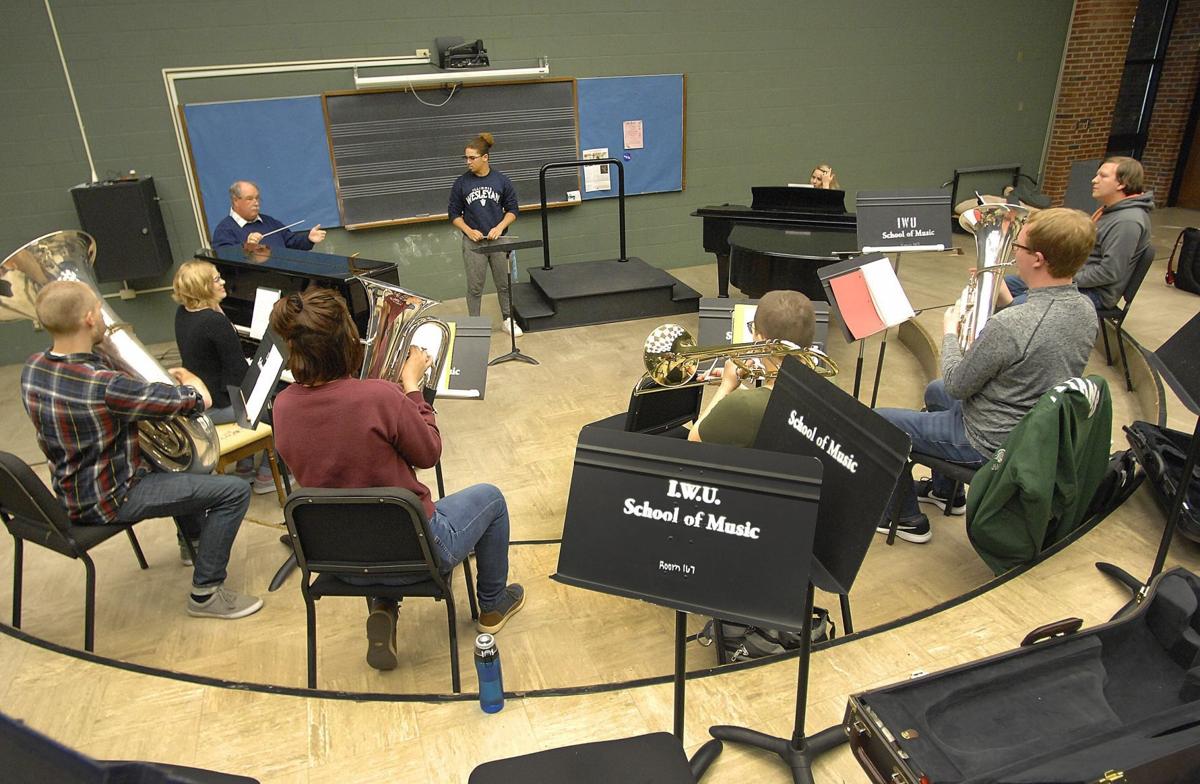 Illinois Wesleyan University assistant professor emeritus of music Roger Garrett teaches his conducting class at Presser Hall in October 2019. The planned conducting professor this fall, Seyeon Ahn, has been put on paid leave due to refusing to teach in person in conditions she felt were unsafe. Her considerations include the lack of ability to social distance as needed in the rehearsal rooms. 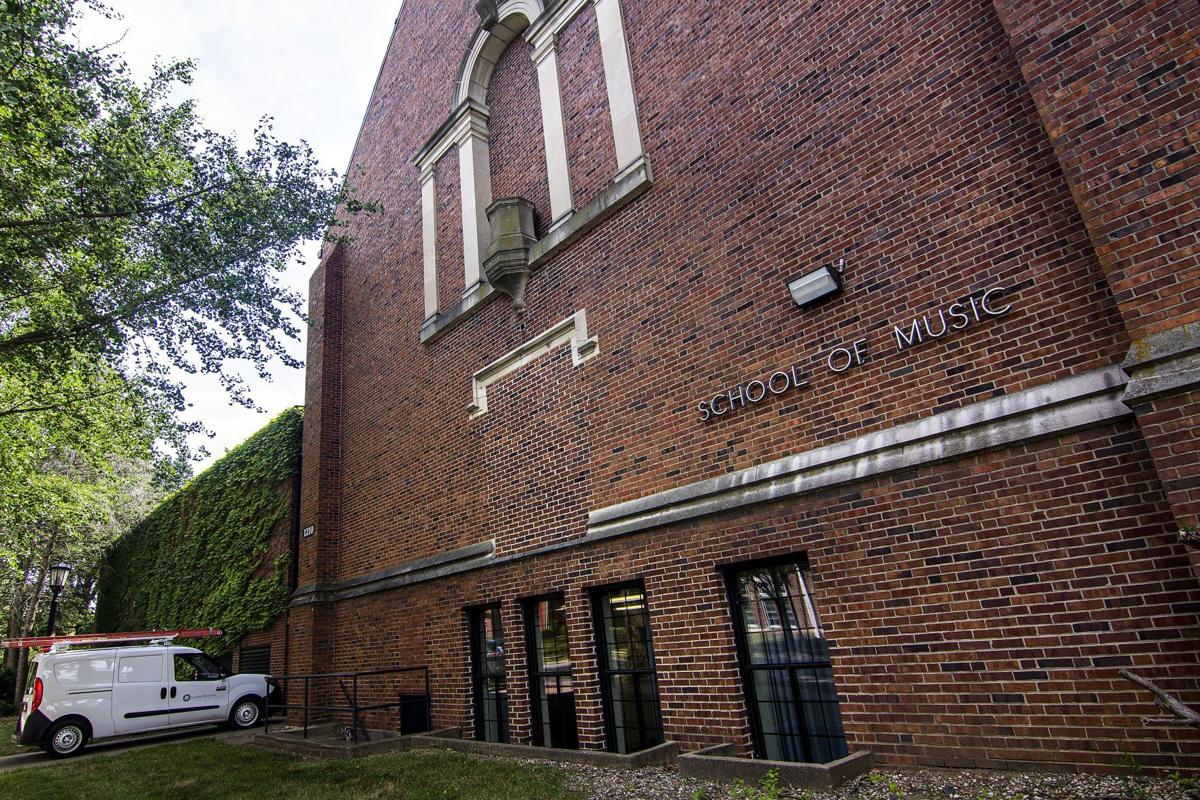 Illinois Wesleyan University's Presser Hall is seen on the IWU campus in Bloomington. The building has been home to the college's School of Music for over 90 years. Professor Seyeon Ahn says the rehearsal rooms are too small for her to feel safe conducting ensembles in them. 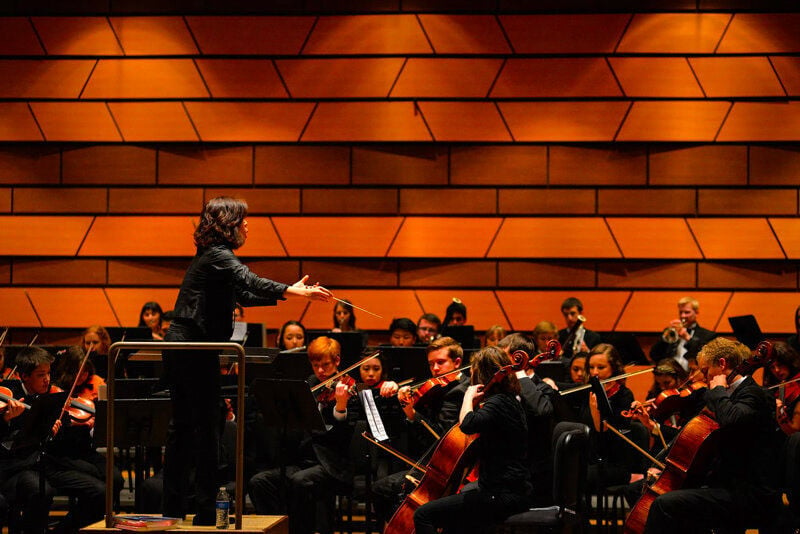 Seyeon Ahn conducts at the Colorado All State Music Festival before the pandemic. She has been suspended from teaching at Illinois Wesleyan University after refusing to teach ensemble classes in person due to what she described as unsafe conditions. 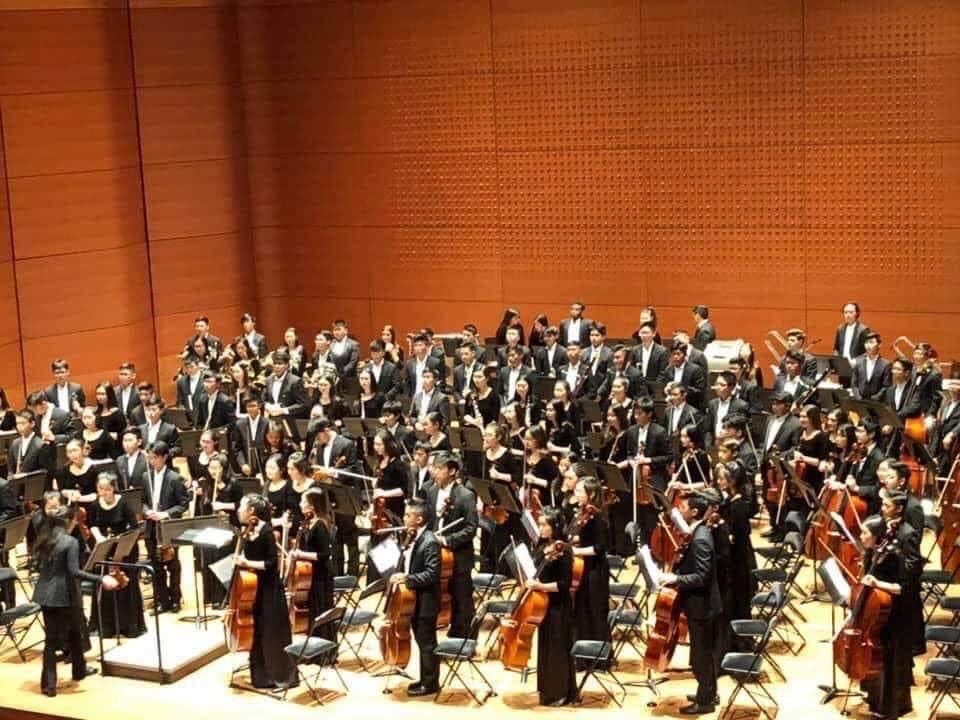 Seyeon Ahn joins the Diamond Bar High School Symphony Orchestra during a competition in New York before the pandemic. She tried to move her classes at Illinois Wesleyan to a virtual format this fall. 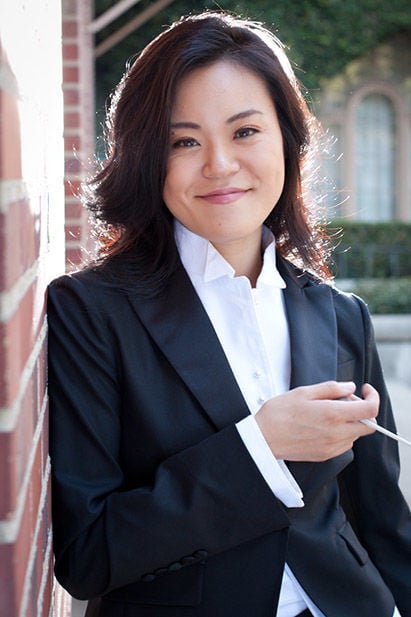