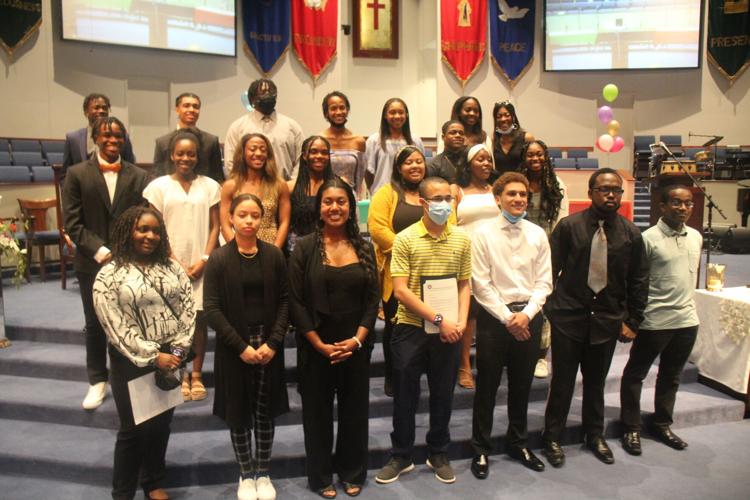 College students and high school graduates from the Twin Cities pose for a group photo at a Joint Scholarship Celebration on Saturday at Mount Pisgah Baptist Church in Bloomington. 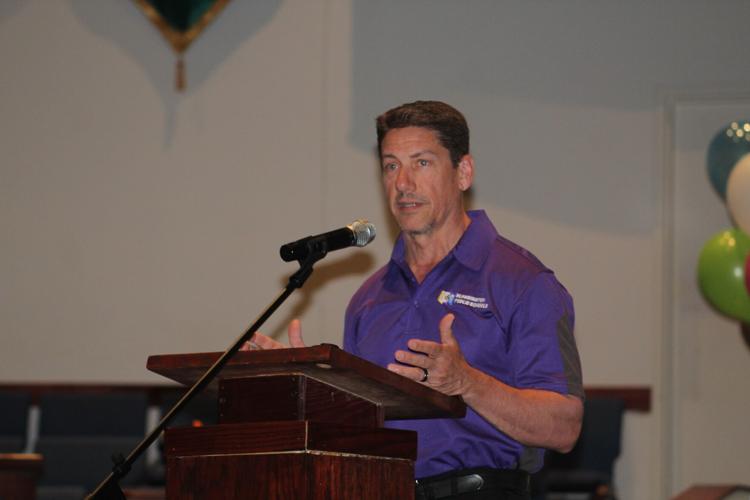 BLOOMINGTON — “You have to put your name in it to win it,” Brandon Caffey of the Alpha Phi Alpha Fraternity said to college scholarship recipients on Saturday.

He represented one of 16 organizations that awarded a total of $81,000 in educational assistance to over two dozen high school graduates and college students during a Joint Scholarship Celebration.

The event was coordinated by the Mentoring and Providing Sponsorships program and hosted at Mount Pisgah Baptist Church in Bloomington. The MAPS program, founded by Dr. Carla Campbell-Jackson and Tony Jones, sponsors the Joint Scholarship Celebration each year.

NAACP Chapter President Linda Foster remarked to the audience that at the heart of the NAACP’s mission is to eradicate racism and discrimination.

Once that is done, she said “we can live in peace. We can exhale and we can be as human beings should be: in harmony.”

As they continue to fight that war on racism, Foster said they need to keep bringing in young people brave enough to apply for scholarships.

Superintendents of both public school districts in the Twin Cities were also present Saturday.

Kristen Weikle, head of McLean County Unit 5, gave her congratulations to all graduates in Bloomington-Normal, and noted she was particularly biased toward Unit 5 graduates. Weikle said she looked forward to them receiving their scholarships.

Barry Reilly, superintendent of Bloomington School District 87, said the scholarships were truly meaningful to the kids in our community, and he’s personally excited for them.

Reilly told recipients there are many who have invested in their futures, and they shouldn’t be afraid to take advantage of those relationships.

“Take the good things that you see in people, learn from those and don't hesitate to reach out and learn from those folks,” he said. “Continue to do that. You’ve got great mentors around you.”

Rhonda Johnson, of Normal, told The Pantagraph that her family established the Dr. Dominique Lawson Scholarship fund as a gift for her daughter, a psychologist in Maryland.

That was done, she said, because they wanted more representation of people of color in her profession, noting only 4% of the psychology field are African Americans. Johnson said they raised money to help encourage students to go into that field.

Another recipient present was Tahigee Floyd, 2022 graduate of Normal Community West High School. He told The Pantagraph that he felt shocked and blessed by the awards.

“I just thank God that I was able to win,” he said, adding that he hopes to help other youth down the road and pass the blessings on.

Floyd said he learned about the scholarship awards a few years ago and had seen others win. And, he said it’s crazy that he can win one too.

Receiving the Mentoring And Providing Scholarships Program fund was Jasmyn Jordan, a 2021 NCWHS graduate who’s double-majoring in criminology and political science in the pre-law track at the University of Iowa.

Jordan spoke at the event about her initial takeaways from her freshman year. She quoted civil rights activist Audre Lorde: “It is not our differences that divide us. It is our inability to recognize, accept and celebrate those differences.”

Drawing parallels between how our bodies need an array of food groups to be healthy and strong, she said, it’s imperative we surround ourselves with people who demonstrate a variety of mindsets, personalities and abilities.

“Every single human is unique and serves a purpose that is unique, and if all of humankind were identical, our race could not survive,” she continued, noting that a homogeneous humankind is unable to solve the world’s problems.

She said diversity and unity allow us to flourish, though groups of certain characteristics will gravitate toward each other. Jordan said they need to learn to be receptive toward the differences of others around them.

“Often humans choose to do what is wrong, because doing right is much harder,” she said. “Some people do not like the differences of others that will directly affect them and challenge their status and power.

“Therefore, it's arduous for humans to find worth in each other's diversity.”

James Harden, executive director of engagement and social learning with the Champaign Unit 4 School District, was the keynote speaker during Saturday's event.

The message he drove home to the audience, especially graduates, was to continually ask themselves: “What (are) you doing? Where are you at? You got plans?”

He then instructed the audience to put those plans on paper.

Next, Harden said to affirm those plans with phrases of  “I am...”

“I am blessed. I am gifted. I am God's child. I am highly favored. I am amazing. I am unstoppable,” Harden said.

Photos: Over 160 kids get hooked on fishing at Miller Park

Unit 5's school board heard Wednesday night that the district's community engagement process has involved more than 1,000 responses from the public.

The Bloomington-Normal NAACP Youth Council will show a documentary it created honoring two of the first Black professors at Illinois State University.

College students and high school graduates from the Twin Cities pose for a group photo at a Joint Scholarship Celebration on Saturday at Mount Pisgah Baptist Church in Bloomington. 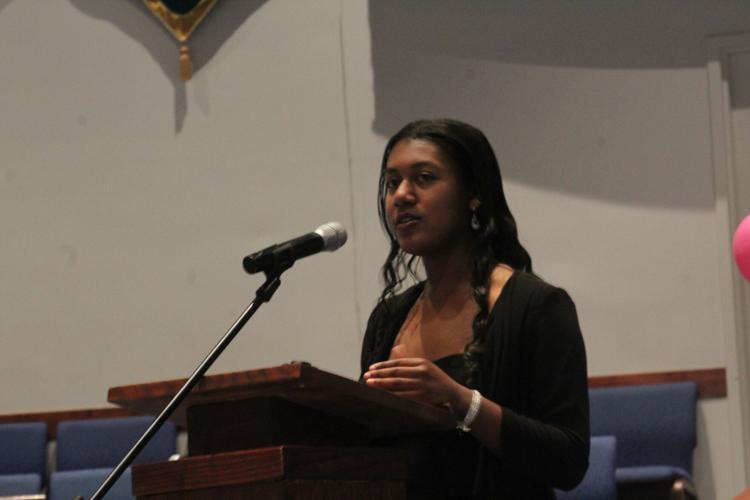 Jasmyn Jordan, a Normal West graduate who’s double-majoring in criminology and political science at the University of Iowa, received a scholarship from the Mentoring And Providing Scholarships Program during the Joint Scholarship Celebration on Saturday at Mount Pisgah Baptist Church in Bloomington. 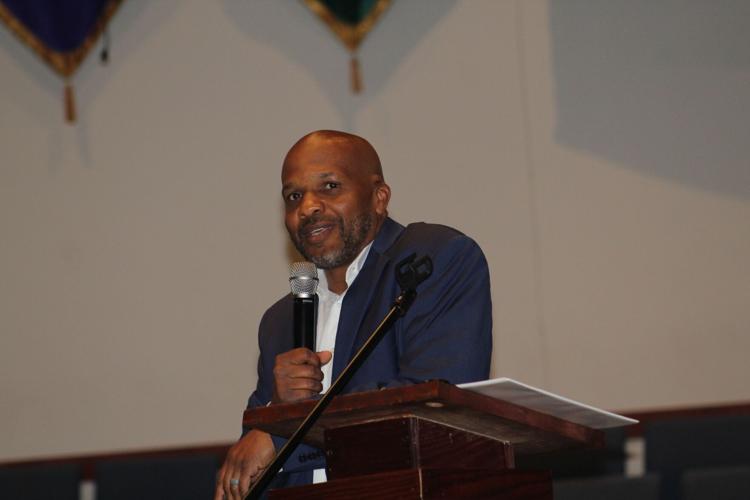 James Harden, executive director of engagement and social learning with the Champaign Unit 4 School District, was the keynote speaker during the Joint Scholarship Celebration on Saturday at Mount Pisgah Baptist Church in Bloomington. 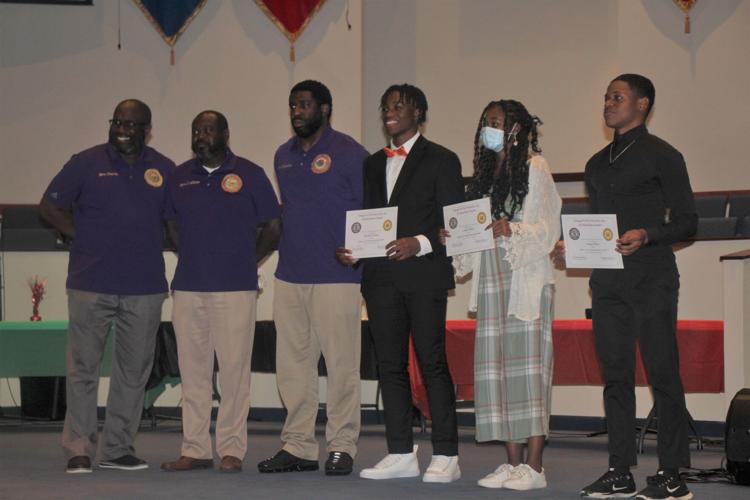