NORMAL — Both the campus community and the public at large might have trouble recognizing Illinois State University's Bone Student Center once Phase One of its revitalization project is completed early next year.

A “grand staircase” taking people to the overpass leading to the main part of campus, plus a three-story addition and welcome center, are only part of the changes.

The 45-year-old building will have more natural light, more indoor and outdoor seating, several new dining options and a more versatile Brown Ballroom with its own reception area where people can gather before functions.

As vice president for student affairs, Levester Johnson is pleased that the center will better meet student needs and expectations.

Photos: Expansion of Bone Student Center is a recruiting asset for ISU 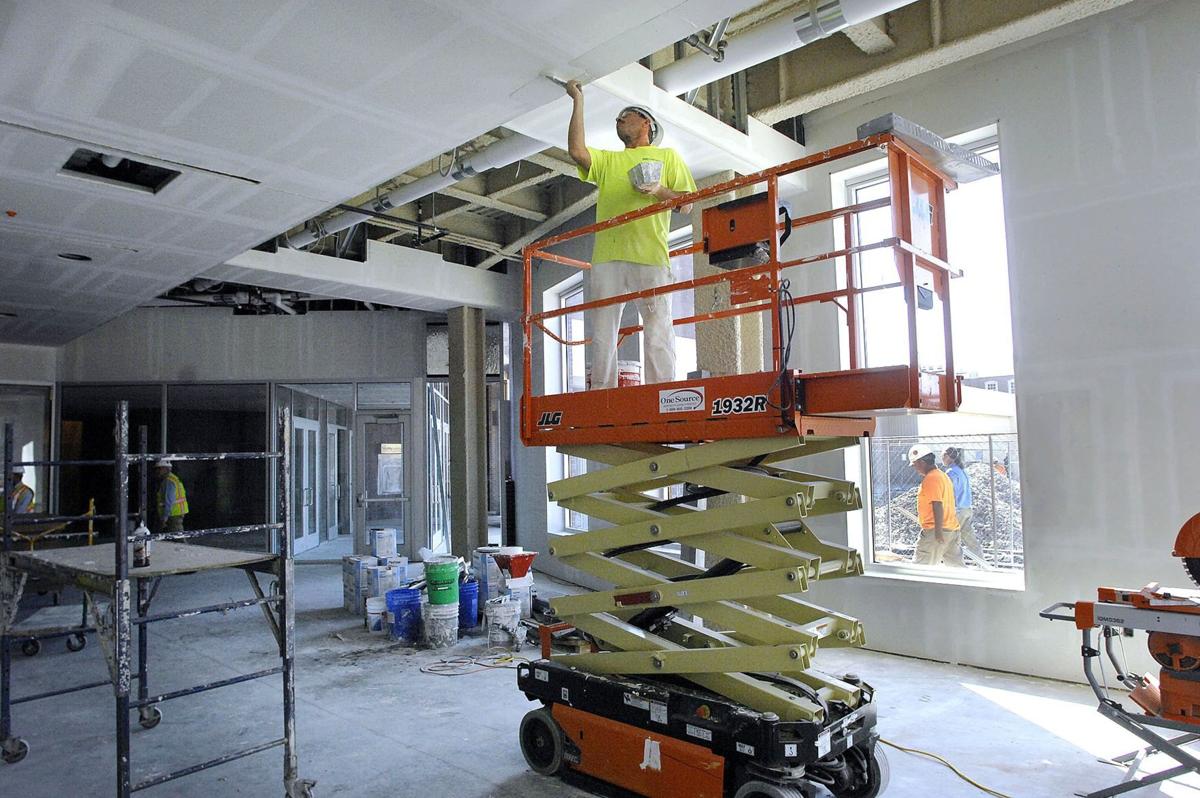 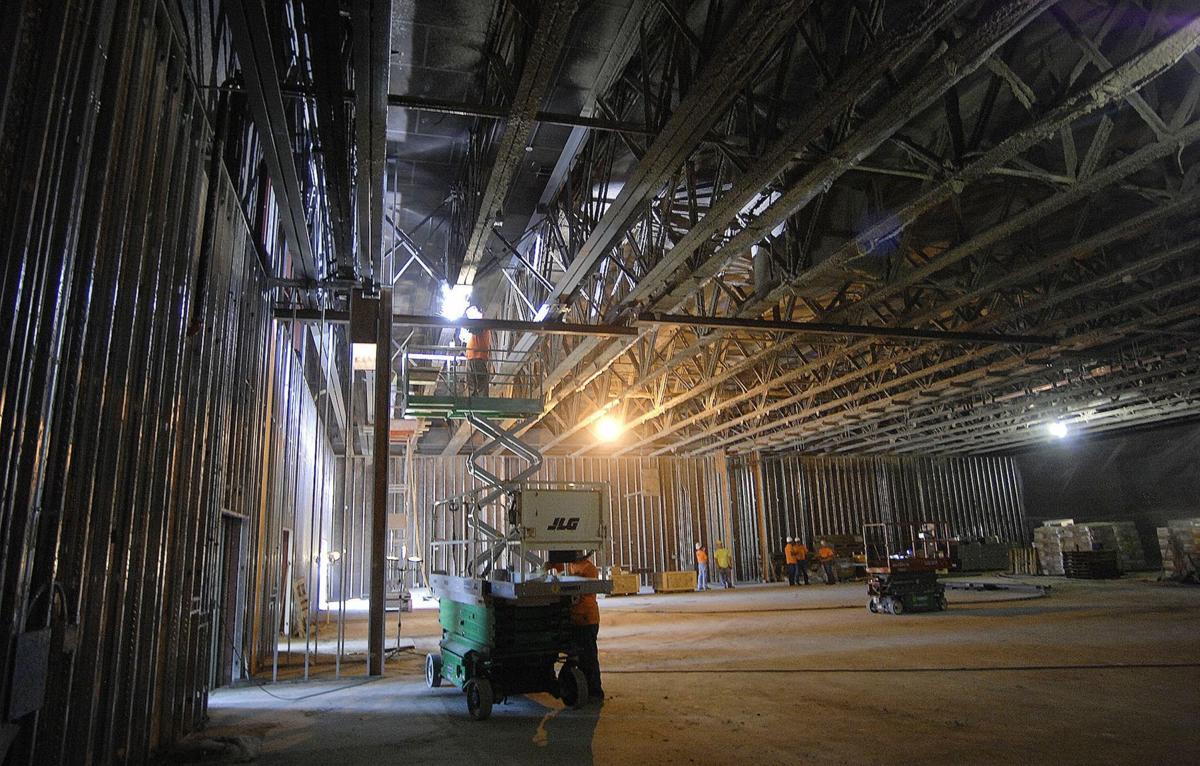 A welder completes adjustments to the structure of Brown Ballroom in the expansion of Illinois State University's Bone Student Center. 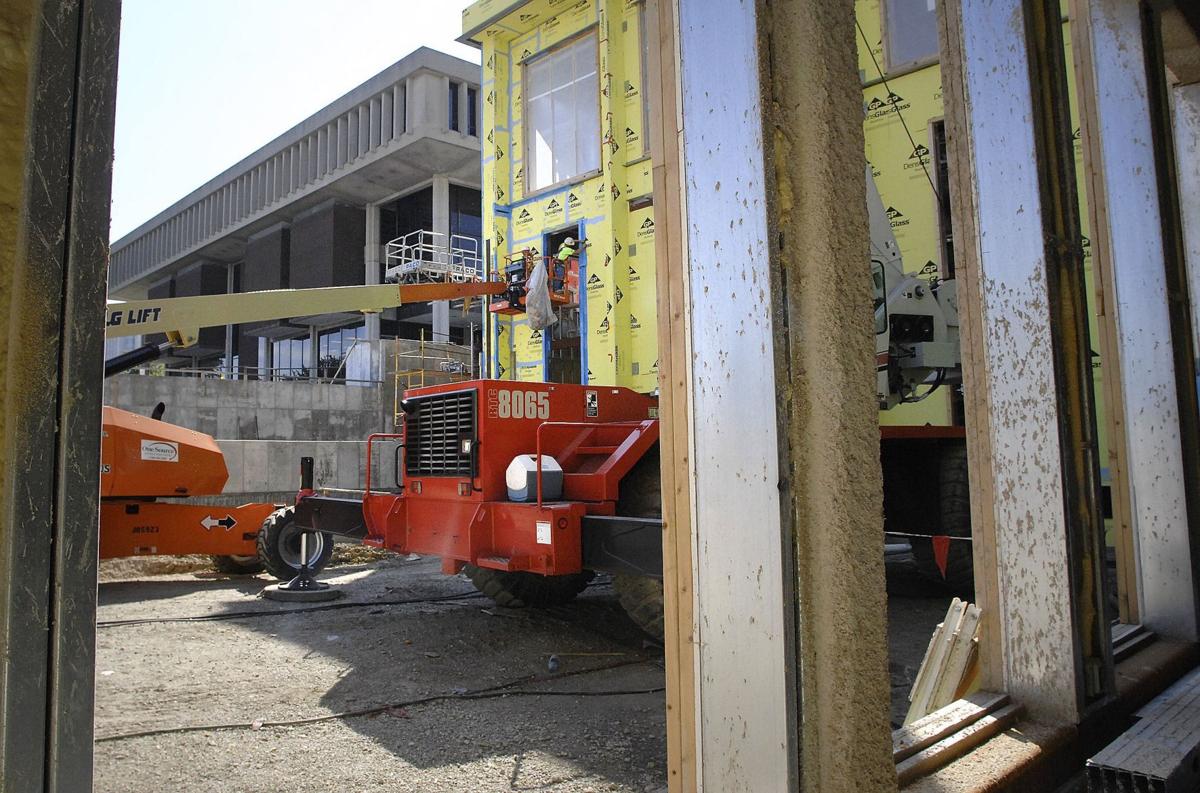 Workers install a door in the welcome center that is part of the expansion of Illinois State University's Bone Student Center. 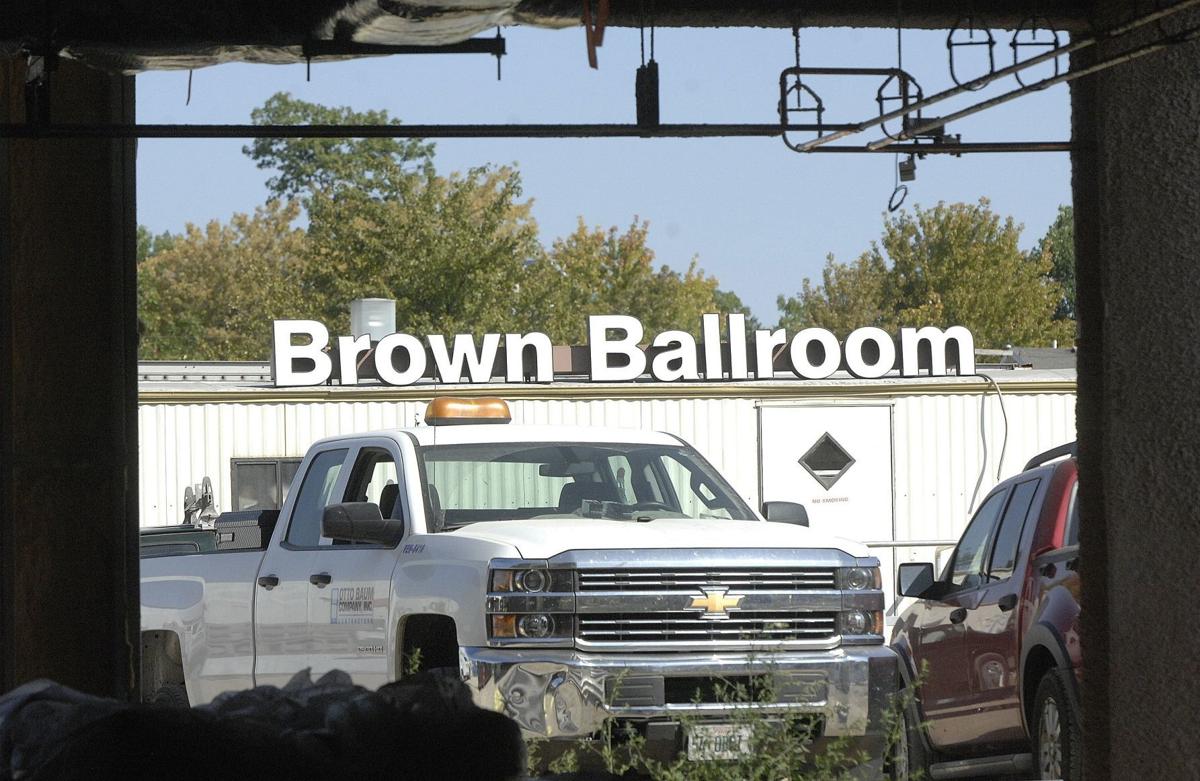 The sign for the Brown Ballroom sits on a construction site trailer during the expansion of Illinois State University's Bone Student Center. 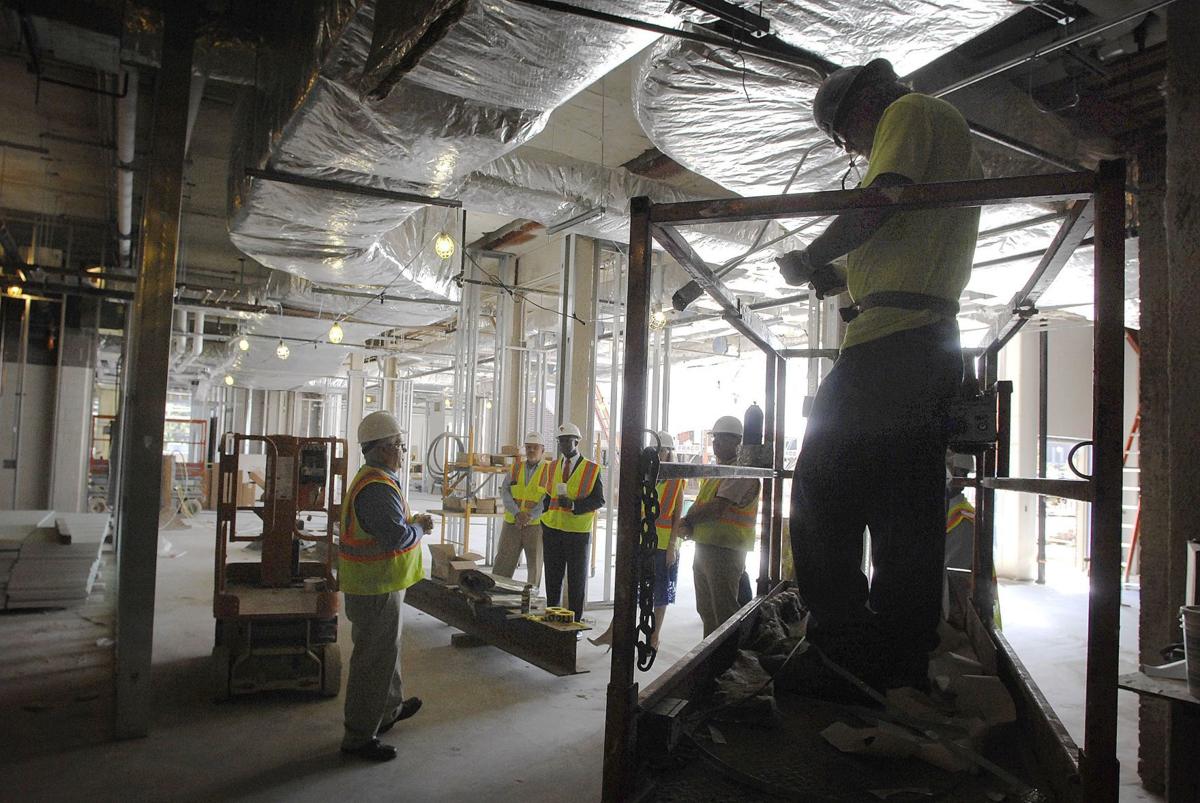 Bill Legett, director of event management, dining and hospitality at Illinois State University, gives a tour of the second floor in the expansion of ISU's Bone Student Center. 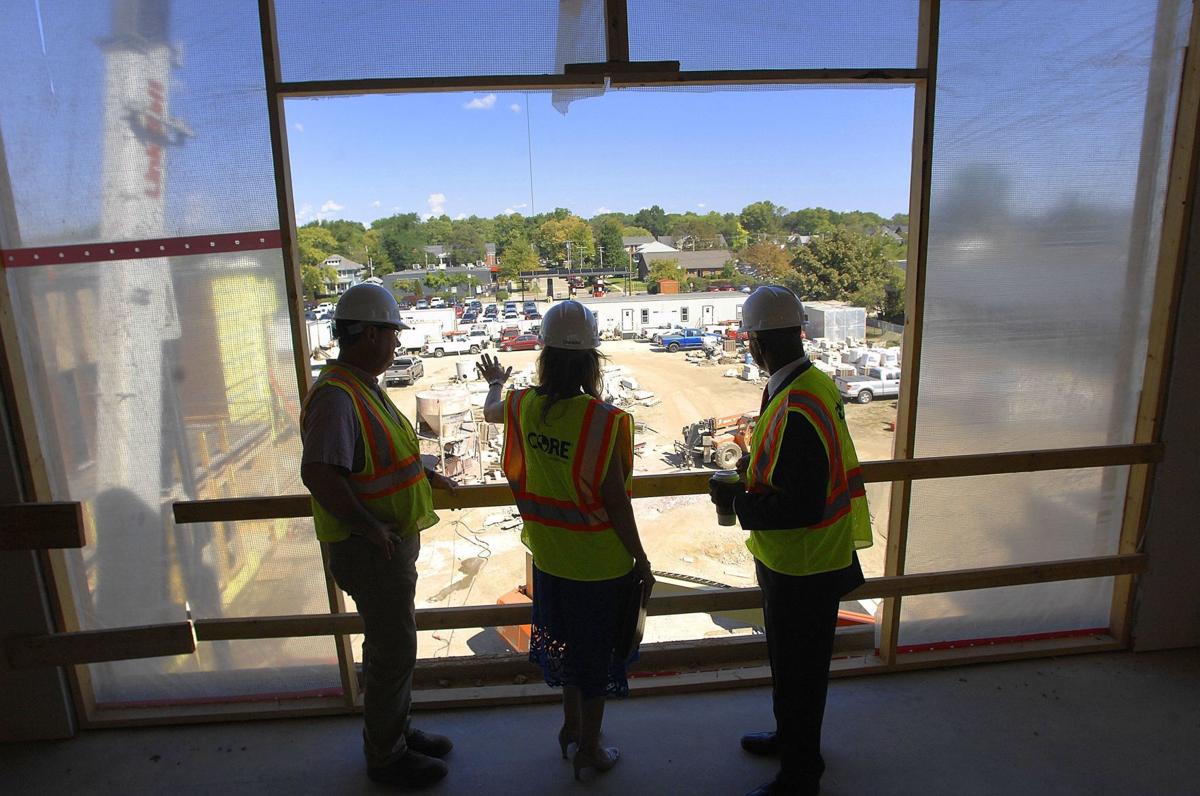 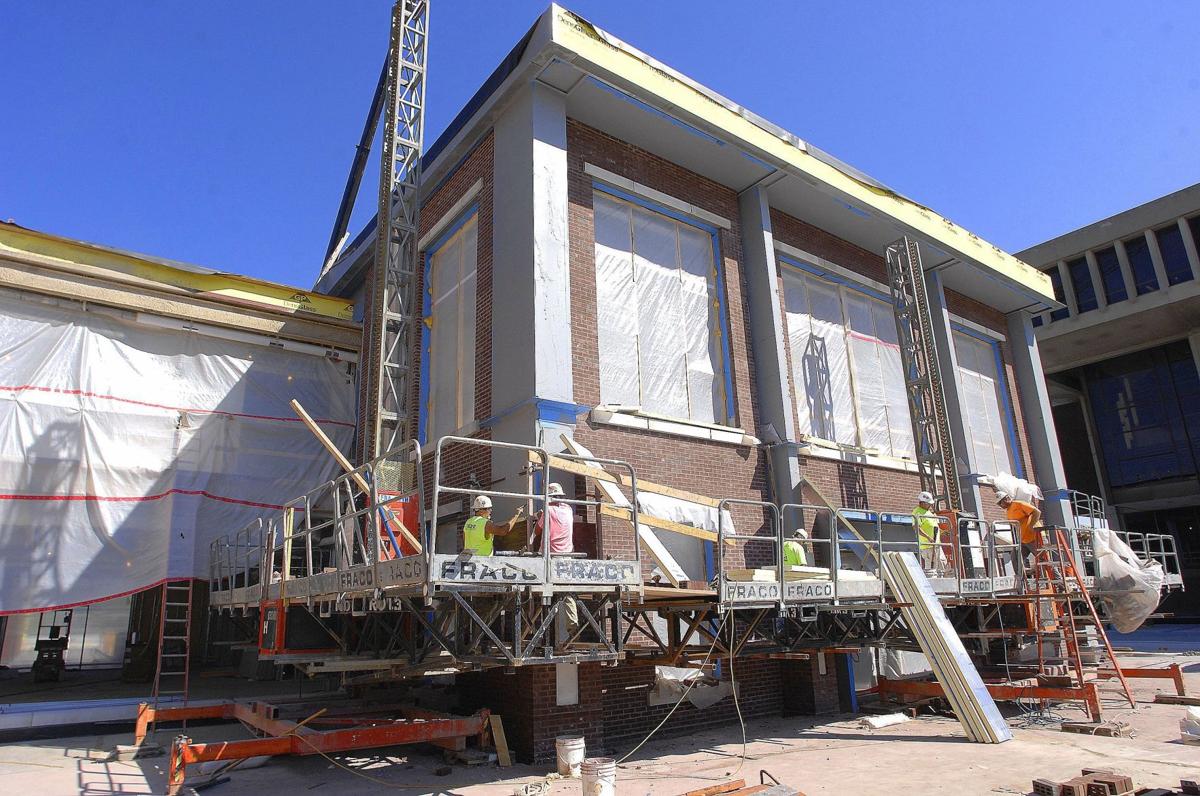 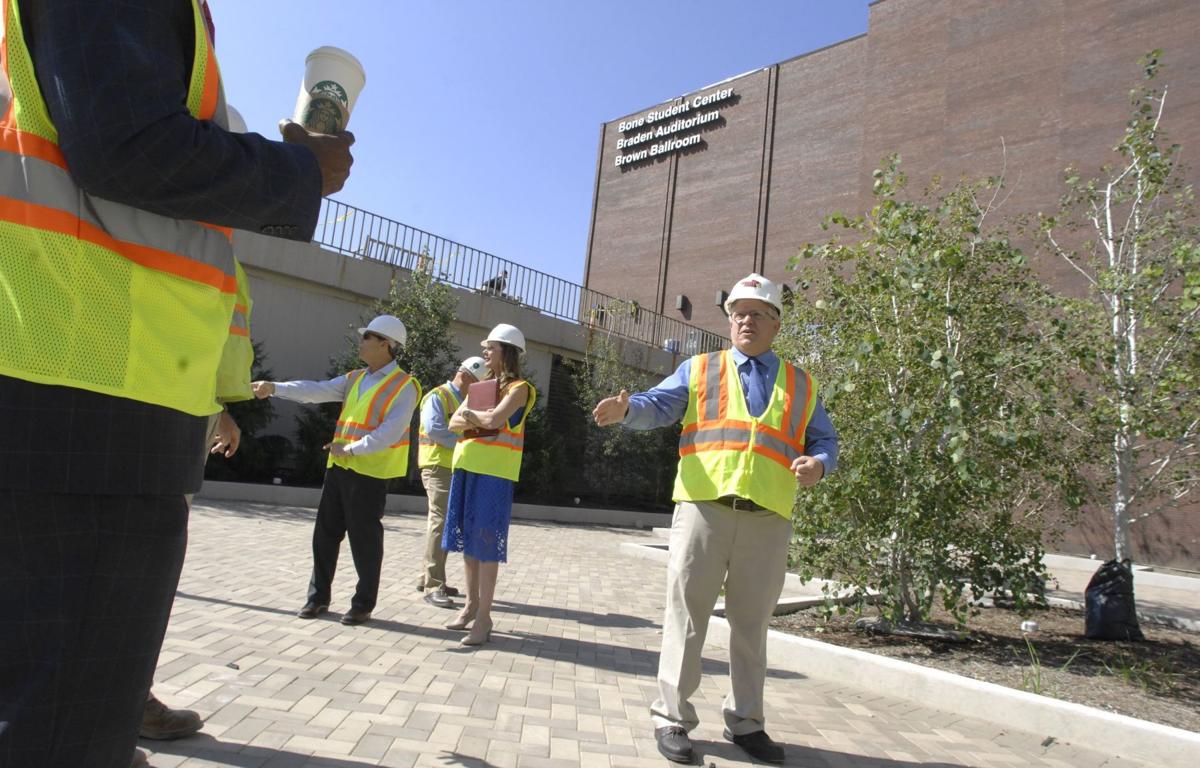 Bill Legett, director of event management, dining and hospitality at Illinois State University, describes how a plaza will provide students with more options for studying and relaxation, as part of the expansion of ISU's Bone Student Center. 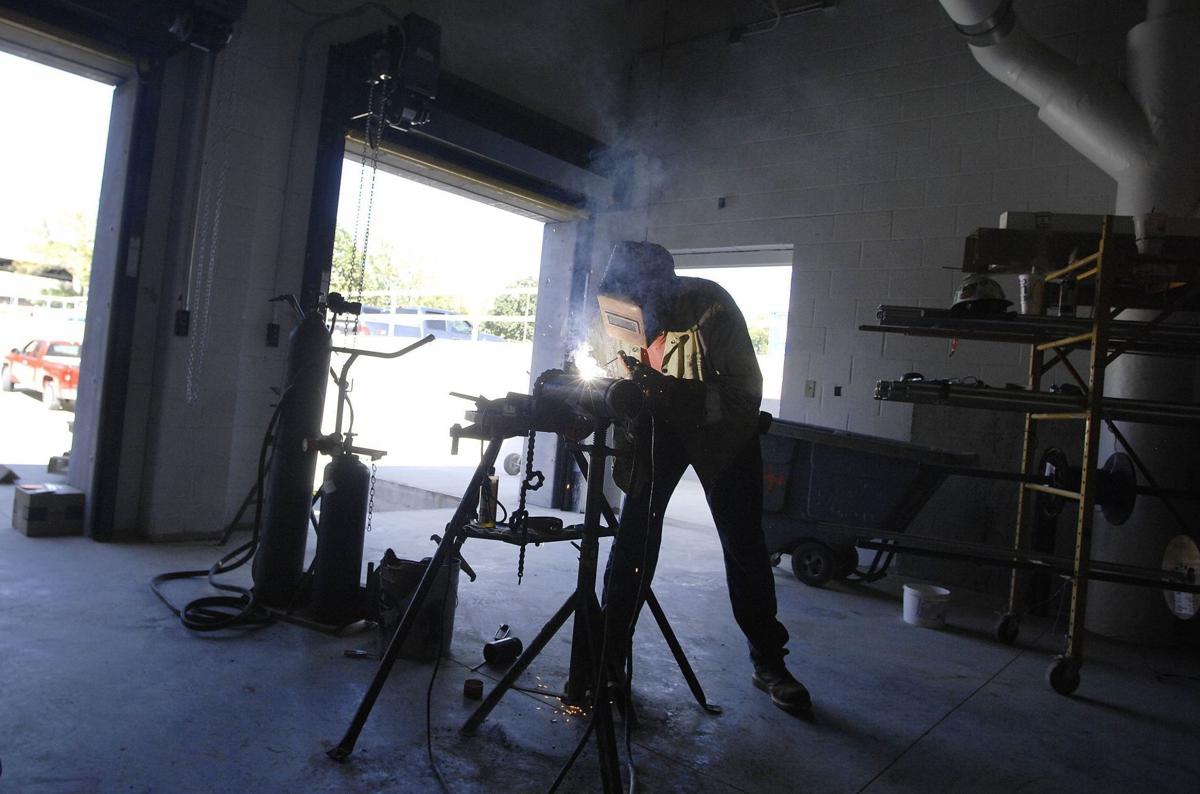 A welder assembles pipe in a loading dock for the expansion of Illinois State University's Bone Student Center. 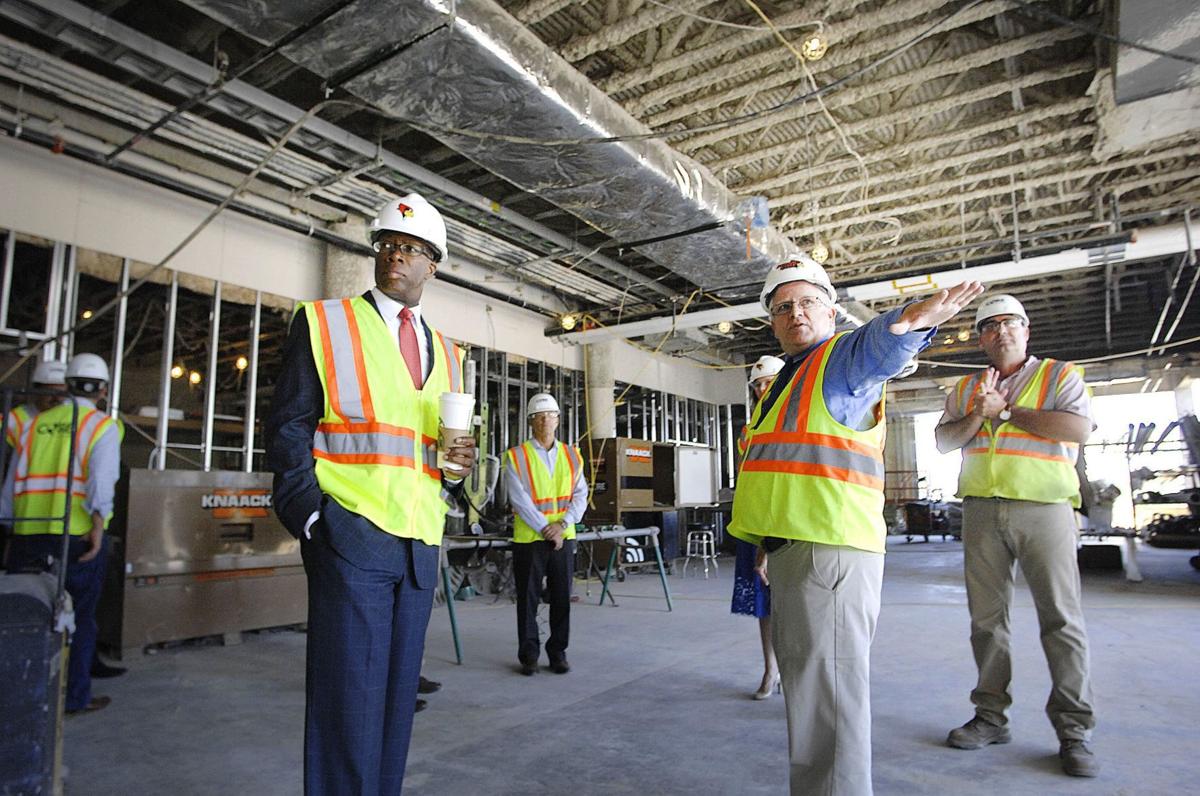 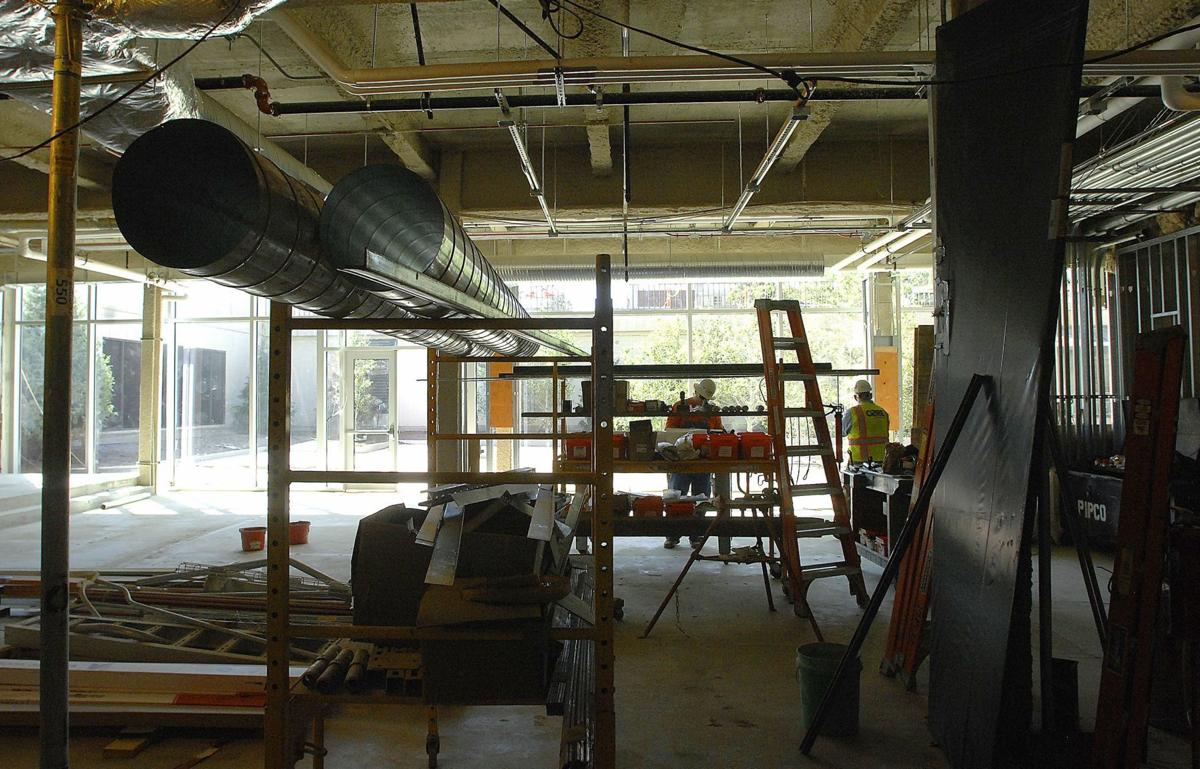 A worker checks blueprints while planning completion of a commercial sales space in the expansion of Illinois State University's Bone Student Center. 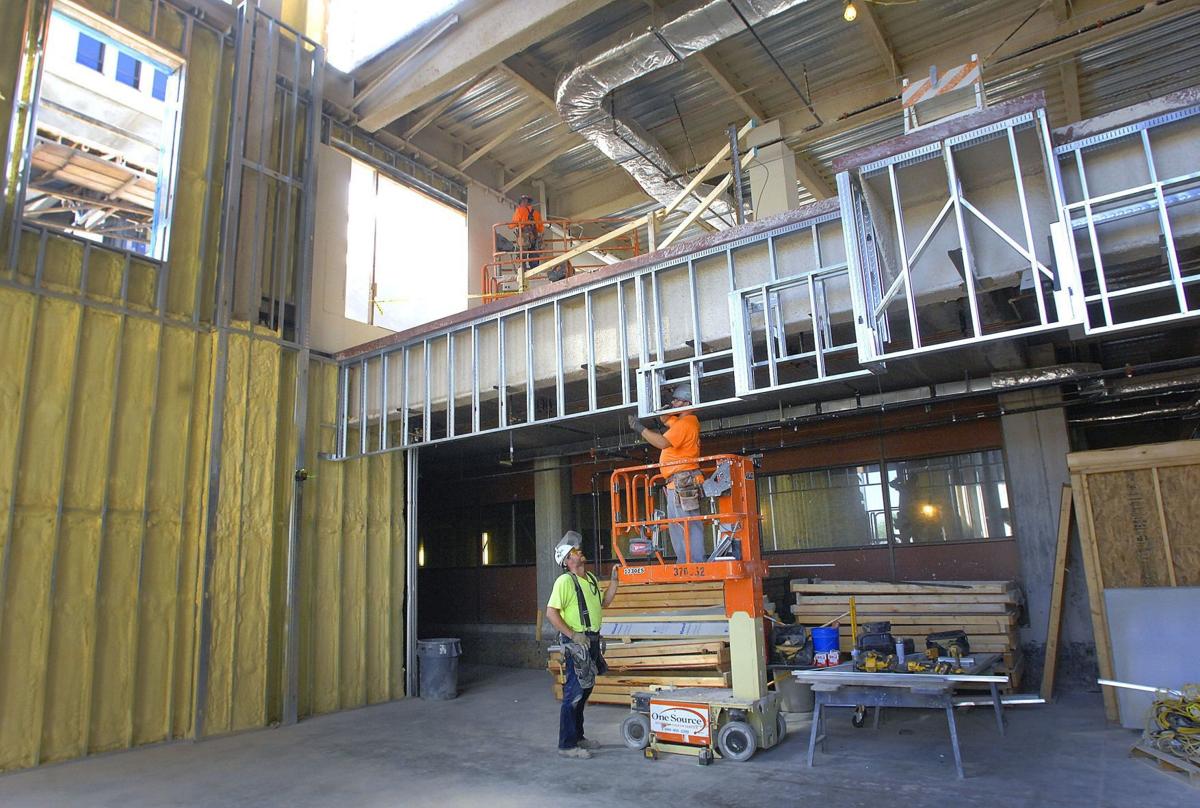 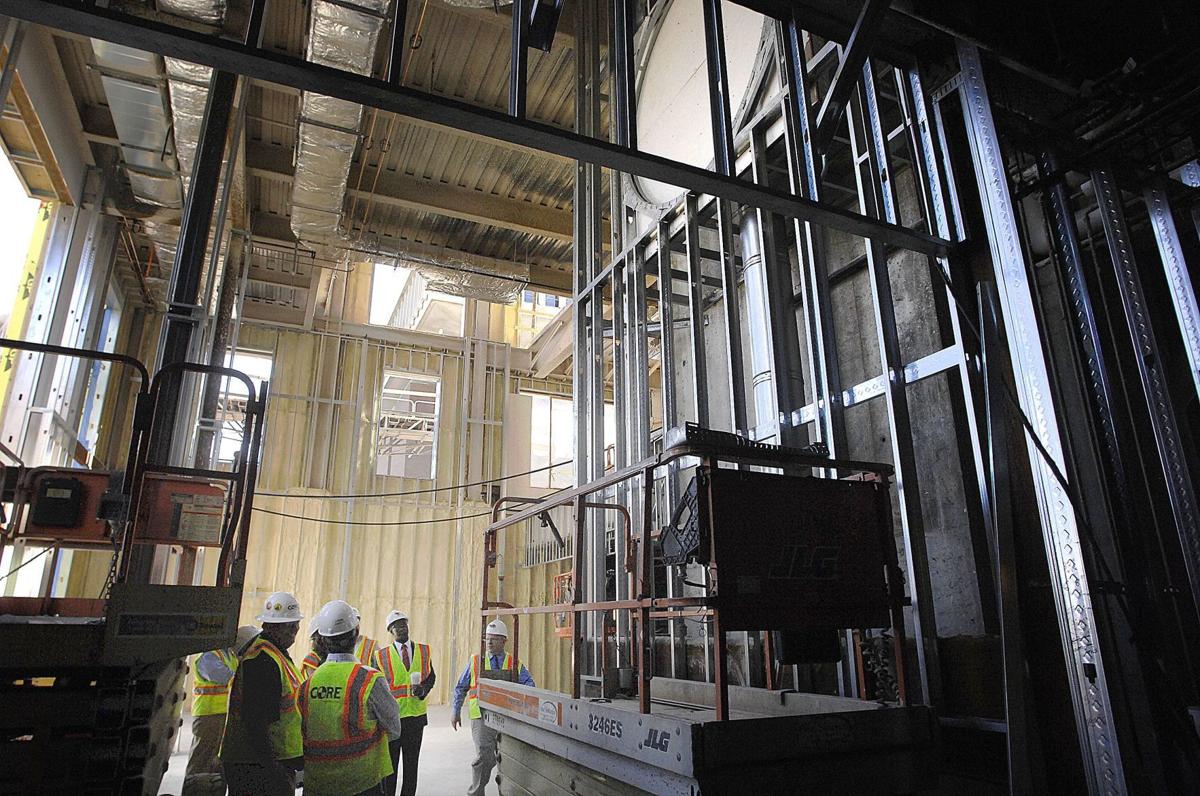 Officials at Illinois State University tour the second floor of the new welcome center. The university seal will be located in the round area at the top of the image. 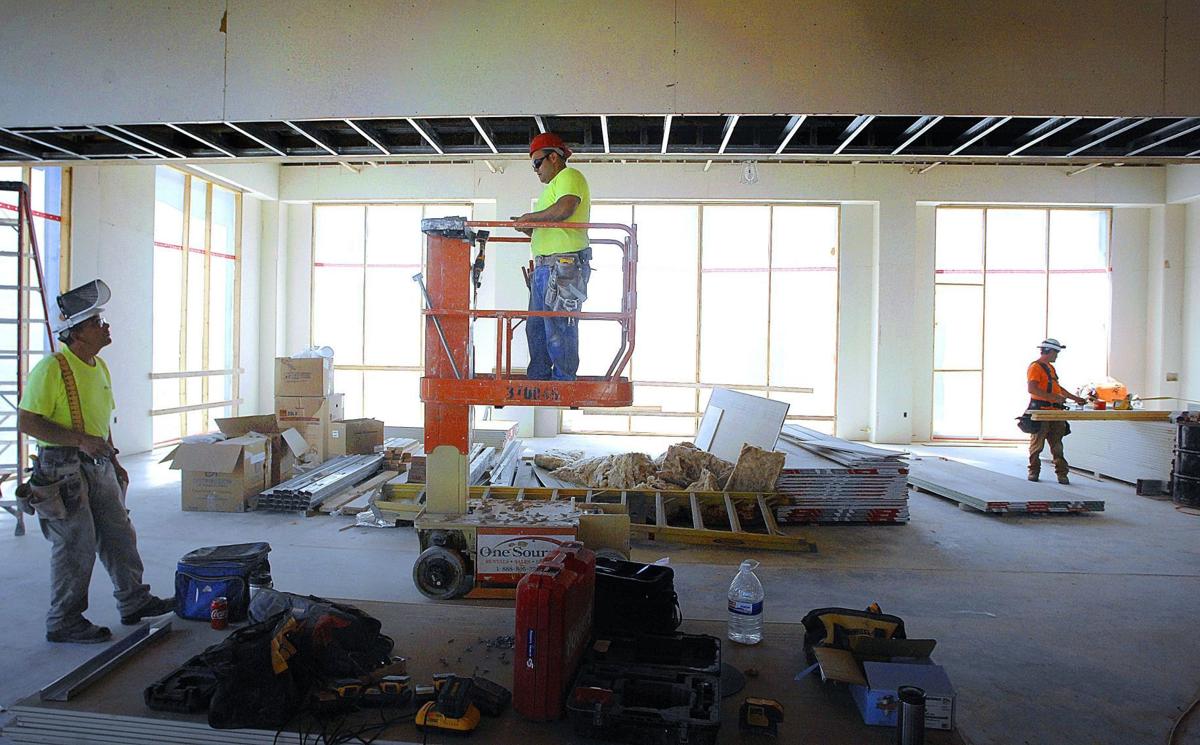 Drywall installation proceeds as workers begin finishing work in an area that will be used to introduce new students to the campus inside Illinois State University's welcome center.

But Johnson also sees the changes as “an opportunity to engage with our community as well.”

“This is a true living room for the campus and we're inviting people in,” said Johnson, following a tour of the work in progress.

The revitalized student center is designed to be more welcoming, with comfortable seating, fireplaces — including an outdoor fireplace — and more outlets to charge electronic devices.

NORMAL — In his nearly 25 years of teaching at Illinois State University, Sol Shulman influenced countless students. But his lessons extended …

Ground was broken about a year ago and the entire $33 million project is expected to take 2 ½ years.

Jim Jacobs, CEO of Core Construction, the project's general contractor, commented on the amenities as he toured the construction site.

“There will be so many places to sit, relax and collaborate,” said Jacobs. “When you keep students engaged on the campus, they'll be so much more successful.”

The Brown Ballroom will have partitions enabling it to remain as one large room or be divided into two or three. In addition to the current ballroom entrance from the main concourse — often a point of congestion — there will be two additional entrances from the new reception or “pre-function” area.

That area can be used for registration or gatherings, including receptions and even buffets before an event, said Bill Legett, director of event management, dining and hospitality.

Work on the Brown Ballroom is expected to be completed in time for ISU Founders Day on Feb. 21, when several events will be scheduled there, said Legett.

“No pressure,” he said with a laugh, looking toward Tom Cole, project manager with Core Construction.

Cole expressed confidence the project will be completed on schedule and even hopes to start part of Phase Two early.

While much of the Phase One work will be done by the end of February, some of the new food areas won't open until mid-March, after spring break, and one is targeted to open in mid-May, after graduation.

Among the new additions will be a Starbucks on the first floor at the east end of the student center with both indoor and outdoor seating. McAlister's Deli will remain at its current first-floor location.

The second floor will include a Tex-Mex restaurant and one with Asian cuisine, officials said. ISU will be the franchisee. Legett said the names of those two restaurants will be announced later, possibly as soon as next month.

The Tex-Mex place will open in March but opening of the Asian cuisine spot is not anticipated until summer 2020.

The Timbers Grille will open in 2020 with burgers, chicken, fries and shakes on the second floor.

The Landing, with grab-and-go food, including pizza, is expected to open in summer near Starbucks. It will also have fresh baked goods from a new bakery under construction at Watterson Commons.

The Barnes & Noble Bookstore will be moving in March from a relatively obscure upstairs location to a highly visible first-floor spot near the grand staircase. It will have large windows facing outside and entrances directly from the outside and from inside of the student center and include ISU merchandise.

“This is kind of the front door to campus,” said Legett.

Having visible Redbird merchandise along with a large ISU logo near the staircase “will help from a branding standpoint,” said Legett. “You know right away you're at Illinois State University.”

The new three-story addition also will include a welcome center for students and visitors, including a place for admissions personnel to meet with parents and prospective students.

The overall project, particularly the second and third phases, also includes a lot of behind-the-scenes changes designed to improve operations and efficiency.

A loading dock is being moved to provide easier access. The catering kitchen is moving to the first floor, closer to the Brown Ballroom and other rooms, which also makes it easier to transport food to other places on campus.

Photos: Expansion of Bone Student Center is a recruiting asset for ISU

For a photo gallery, go to www.pantagraph.com.

Leaving a mark: Students, others sign onto Bone revitalization project

NORMAL — More than 500 people have left their mark — literally — on the revitalization project at Illinois State University's Bone Student Center.

NORMAL — With much fanfare and an improvised drumroll, Illinois State University announced Thursday that Qdoba Mexican Eats, Starbucks and a g…

NORMAL — There will be no Spring Bloom Fine Arts Festival this year.

Artist, others to be honored at ISU Founders Day

Some of the kitchen and preparation areas in Illinois State University's new Culinary Support Center are the stuff that dreams are made of for many, even if the challenge of cooking 200 pounds of chicken taco meat would be nightmare to others.

Bill Legett, director of event management, dining and hospitality at Illinois State University, describes how a plaza will provide students with more options for studying and relaxation, as part of the expansion of ISU's Bone Student Center.