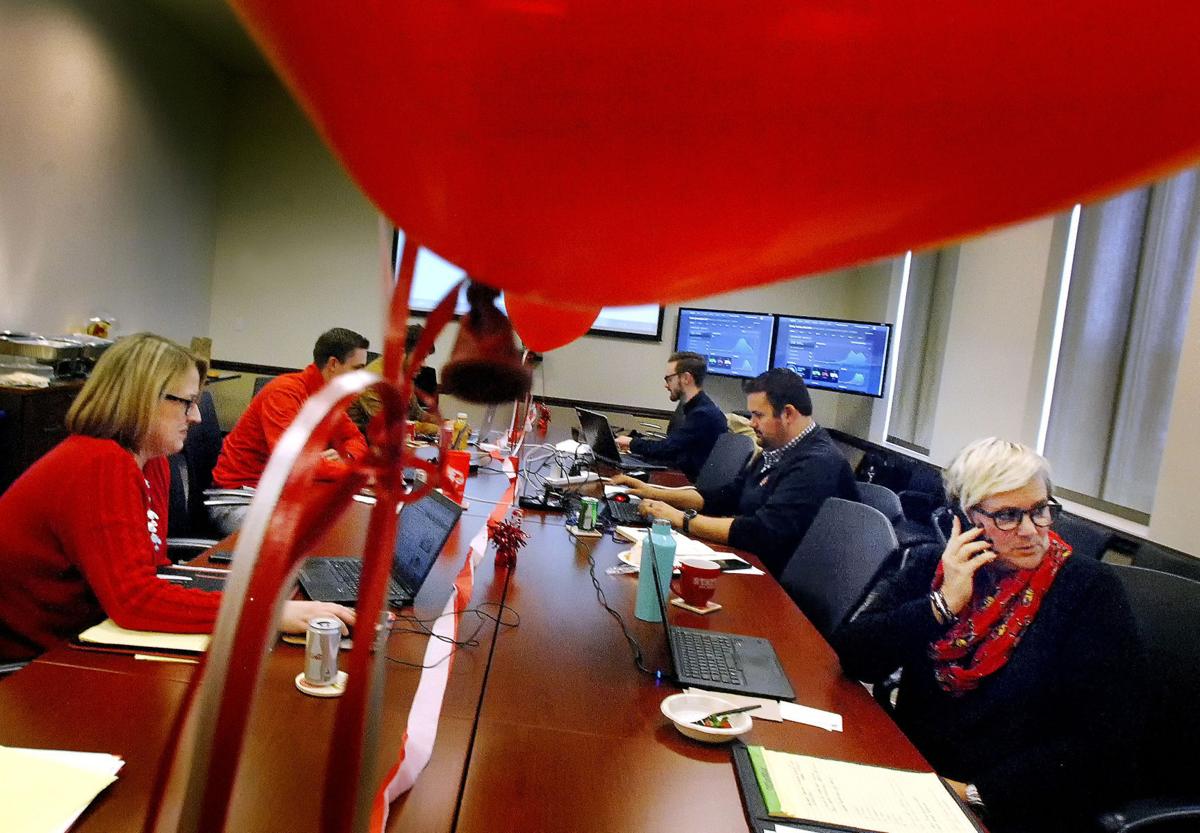 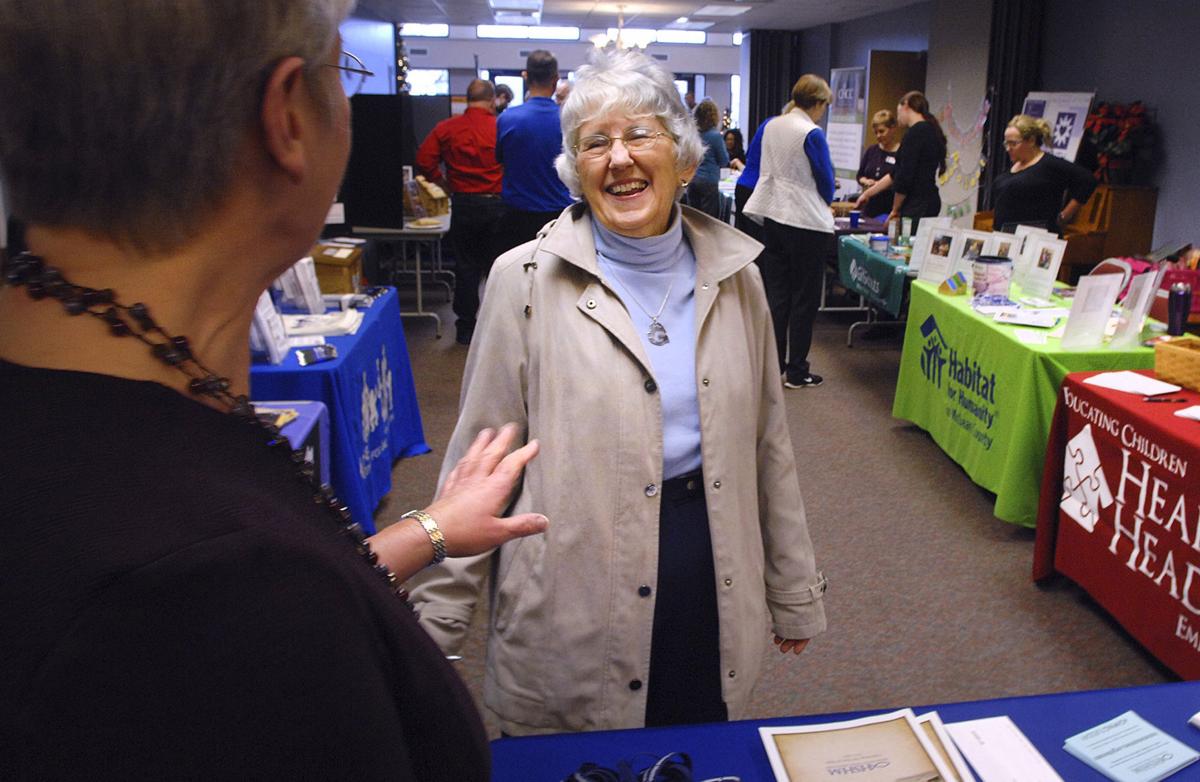 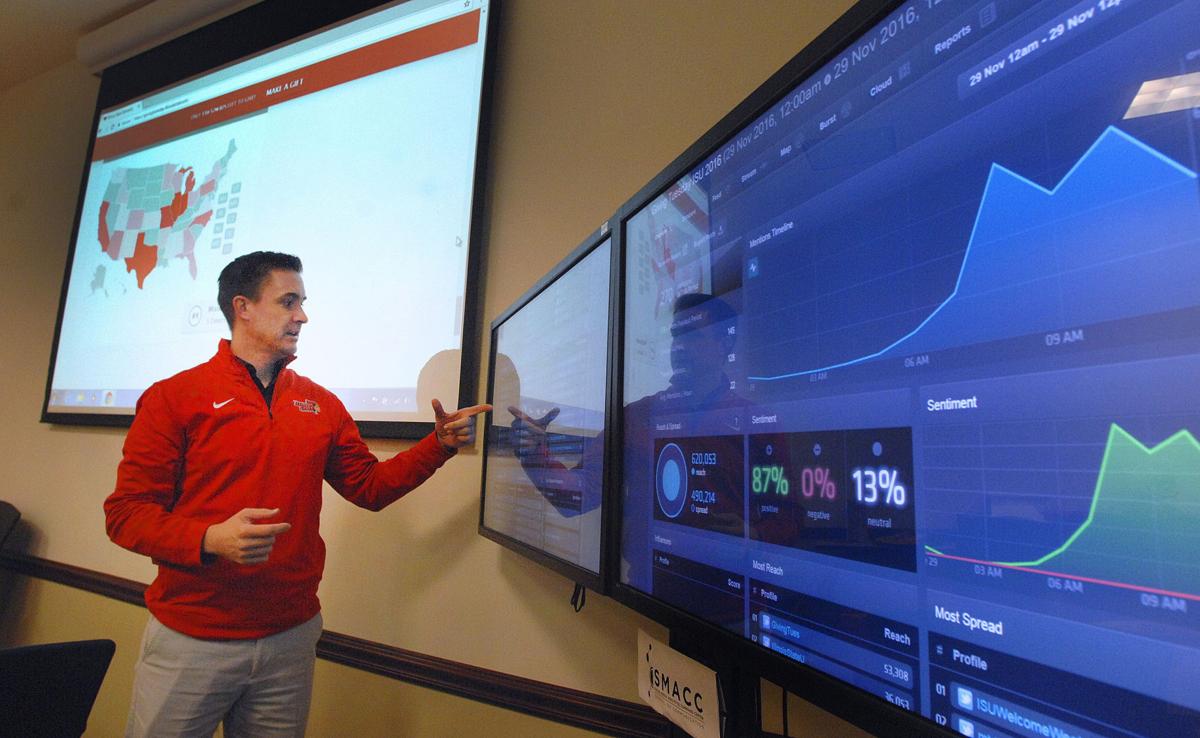 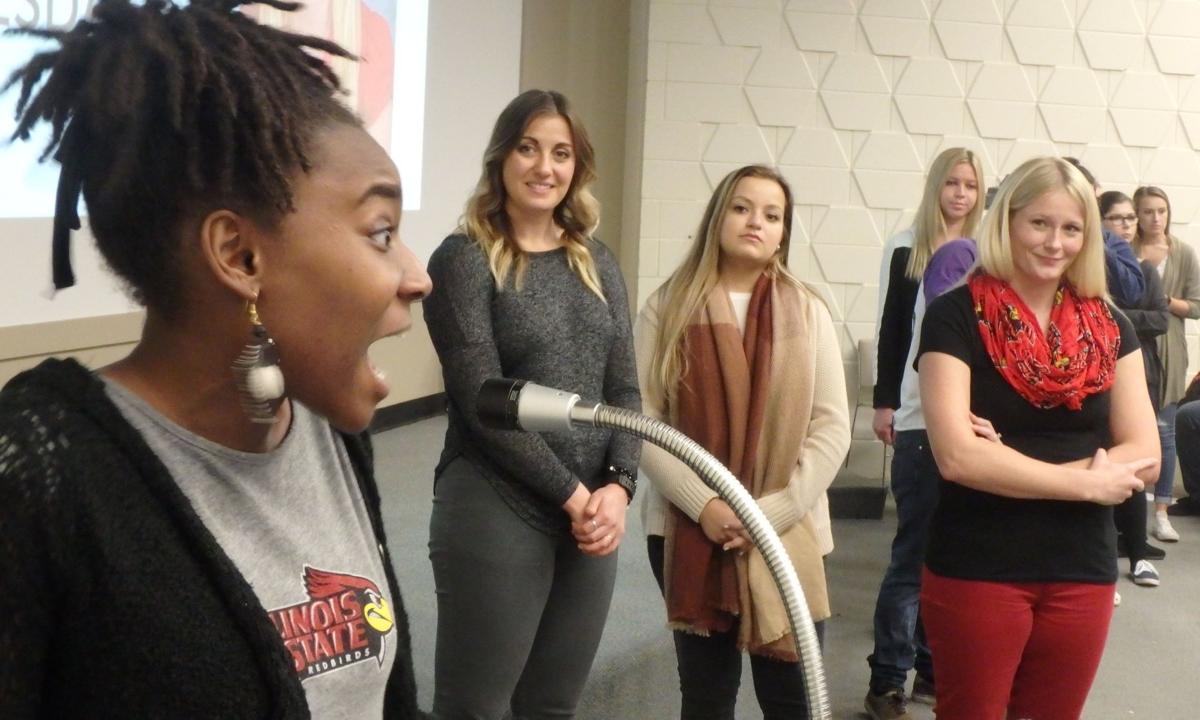 Senior Joanna Davis of Chicago talks about the leadership and other opportunities she received at ISU while discussing the importance of Giving Tuesday in her public relations class on Tuesday.

NORMAL — Senior Joanna Davis stood in front of her class on Tuesday morning and talked about the opportunities Illinois State University had given her and why it is important to say thanks and give back.

“I'm giving back because of the opportunities I've received,” said Davis, a marketing major from Chicago who has been a resident assistant and took part in ISU's Startup Showcase.

But her audience went beyond her fellow students in Introduction to Public Relations. She and others who took part were shown on Facebook Live as part of Giving Tuesday, a global day of fundraising in which ISU has taken part since 2014.

Last year the university received 1,670 gifts totaling $593,936 through Giving Tuesday. This year's totals won't be known for a day or two as donations by mail are also accepted. As of early evening, ISU had received 911 gifts totaling $292,855.

It's a day filled with challenges — good ones — such as donors challenging people to reach certain benchmarks to “unlock” their gifts or trigger matching dollars.

That's what instructor Tom Lamonica did with his public relations class, agreeing to match whatever donations they made on Giving Tuesday. This year his class contributed $218.13, which he matched penny for penny.

Service and giving are an important part of public relations, explained Lamonica, so he sees taking part in Giving Tuesday as a learning experience. Students who couldn't afford to donate were encouraged to simply put a note of thanks in the envelope.

“It's more about the culture of giving” than the amount of money collected, said Lamonica.

Started in 2012, Giving Tuesday follows the consumer-oriented days of Black Friday and Cyber Monday and is intended to harness the power of social media and collaboration to celebrate and encourage philanthropy.

The Giving Tuesday movement has grown not only nationally but locally. Other colleges and universities in the area are taking part as well as organizations such as The Baby Fold, Girl Scouts of Central Illinois and the American Red Cross.

The First United Methodist Church in Normal hosted a Giving Tuesday BloNo event at which representatives from about 20 organizations were present to answer questions about their programs and accept in-person donations.

While many organizations take part in Giving Tuesday, including the use of challenges on social media, few jump in with both feet the way ISU does.

From a “nerve center” set up in the Alumni Center on North Main Street, organizers send out a steady stream of tweets, Instagram photos and Facebook posts, including pre-recorded videos, while monitoring social media traffic and strategizing on how to get the most bucks for the bang.

A website, givingtuesday.ilstu.edu, keeps a running tally of donors and donations totals, as well as listing challenges. Also included is a “leader board” showing how many gifts each participating group had attracted.

“I hope people look at it as good-natured fun competition,” said Pat Vickerman, vice president for university advancement. “Philanthropy should be fun.”

The fun is also in the challenges. For example, Vice President for Student Affairs Levester Johnson and ISU Police Chief Aaron Woodruff agreed to participate in a lip sync contest if at least 200 people donated to the student affairs division.

But there are serious money challenges, too. Hitting 500 donors unlocked a donation of $100,000 from two anonymous donors.

Individual groups within ISU had their own challenges.

Lora Wey, executive director of annual giving at ISU, said Giving Tuesday does not detract from fundraising at other times of the year. On the contrary, she said, “It enhances overall fundraising” by attracting new donors and encouraging lapsed donors to resume giving.

“Everybody wants to be part of something that's successful,” said Wey.

Coming in the midst of ISU's comprehensive Redbirds Rising campaign, Giving Tuesday helps get the word out and tap into philanthropy, said Vickerman.

"Every day is giving day during the campaign," he said.

The union has scheduled a strike vote for Oct. 4.

October will be a busy time for the planetarium due to special events, which often include extra shows.

Illinois State University President Terri Goss Kinzy focused on the lasting impacts of the pandemic and the strengths that pulled ISU through to this year during her first State of the University address on Tuesday.

The Lincoln Heritage Museum at Lincoln College will host a Week of Celebration next week in place of its annual Grand Soirée fundraiser. The event includes free admission and a wine pull.

Reagan is the only U.S. president who was born and raised in Illinois. He graduated from Eureka in 1932 and maintained close ties to the school, including giving speeches at it throughout his life.

Senior Joanna Davis of Chicago talks about the leadership and other opportunities she received at ISU while discussing the importance of Giving Tuesday in her public relations class on Tuesday.