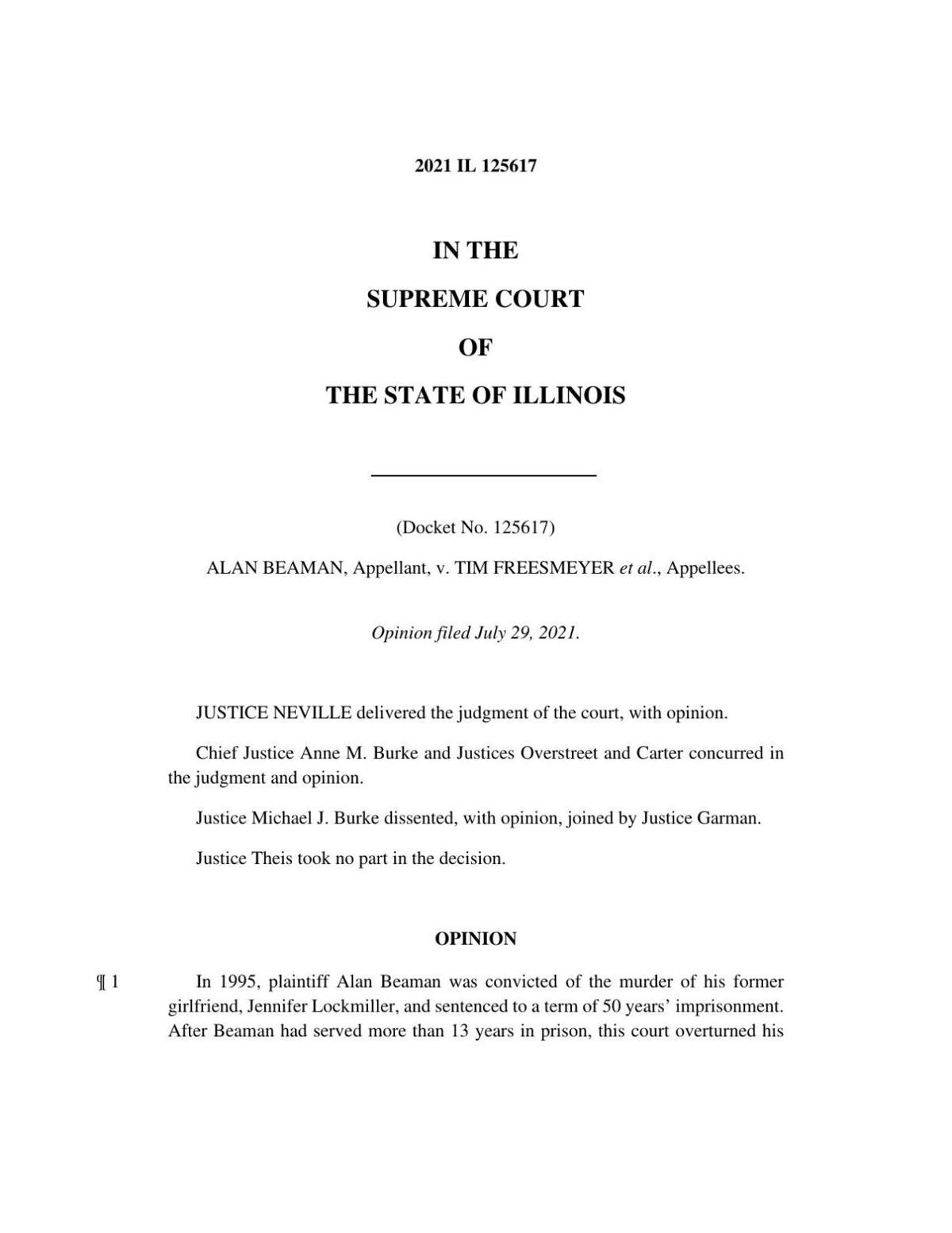 SPRINGFIELD — An Illinois Supreme Court opinion Thursday cleared the way for a trial for Alan Beaman’s case against the Town of Normal and three former police detectives, accusing them of maliciously prosecuting Beaman for the 1993 murder of an Illinois State University student.

Beaman, of Rockford, was convicted of murder in 1995 for the death of his ex-girlfriend Jennifer Lockmiller of Decatur.

He served 13 years of his 50-year prison sentence before the Illinois Supreme Court reversed the conviction and exonerated him in 2008.

The state issued Beaman a certificate of innocence in 2013 and former Gov. Pat Quinn pardoned him in 2015.

David Shapiro, with the MacArthur Justice Center and one of Beaman’s lawyers, said that in addition to the malicious prosecution claim, Beaman and his lawyers claim the officers engaged in a conspiracy and that it was intentional conduct causing emotional distress.

The civil case, which was filed in 2014, now goes to the McLean County Circuit Court.

“This is a case about a great wrong that was done to a citizen of our state and it ought to be heard and decided by a jury of citizens of Illinois,” Shapiro told The Pantagraph. “They ought to hear this story and ultimately be able to decide what is appropriate and whether and how to try to compensate — the years that Alan has lost are not possible to compensate — but to make some effort to provide recompense for the extraordinary injustice that he suffered.”

The Town of Normal and three former police officers are represented by Thomas DiCianni of Ancel Glink law firm in Chicago.

“The court’s decision is extremely disappointing. As the Seventh Circuit observed, the investigative activity involved in this case is standard in every investigation. This decision threatens to expose police to lawsuits second guessing the difficult judgments they have to make in every major investigation. We are evaluating a motion asking the court to reconsider this very concerning decision,” DiCianni said in a statement.

The Supreme Court’s 5-2 ruling was a reversal of a defense motion for summary judgment, which likely would have ended the case before trial.

The opinion explained back-and-forth rulings between the Supreme Court and the 4th District Appellate Court about whether Beaman could prove the police officers maliciously prosecuted him and if he could prove the lack of probable cause for his arrest and prosecution.

The appellate court granted the police officers summary judgment on a basis that it is the state’s attorney’s office’s job to prosecute individuals.

But the Supreme Court said investigators also are responsible for allowing prosecutors to charge someone and continue a case.

“Prosecutors are greatly dependent on the detectives assigned to a particular case and must be able to rely on their fidelity to the objective principles that ought to guide the handling of an investigation,” the Supreme Court wrote. “It is inescapable that the independent judgment of a prosecutor will be colored by the nature of the investigation performed by the police.”

The other large issue was Beaman’s attempt to show the lack of probable cause for his arrest and prosecution.

“We find that Beaman has presented sufficient evidence to create a genuine issue of material fact as to whether there was an absence of probable cause to arrest and prosecute him for the murder,” Neville wrote in the opinion. “That determination must — and can only — be resolved by a trier of fact, and the lower courts erred in finding otherwise.”

Justice Michael Burke, who disagreed with the court’s ruling, wrote: “To satisfy the absence-of-probable-cause element in his action against defendants, Beaman must show that defendants played a significant role in the commencement or continuance of the criminal prosecution despite knowledge of a state of facts that reasonably indicated probable cause was lacking.”

Justice Michael Burke wrote that the Normal police officers “ceased playing a significant role when they brought the results of their investigation to the prosecutors, who took over after the meeting.”

Watch now: McNabb, co-conspirators 'were on a mission' in 2019 Bloomington murder, prosecutors say

Prosecutors told jurors Tuesday that Amari McNabb killed Juan Nash in April 2019 for “revenge and retaliation” for a separate murder the year before, but his defense lawyer said the State's Attorney's Office has “no evidence” to prove guilt.

Saturdays on The Square is hosted by Pantagraph Media, The Castle Theatre and the City of Bloomington. All concerts are held on the museum square, 200 N. Main St. in downtown Bloomington, with seating starting at 6 p.m. and music at 7 p.m.

A potential zoning change to the One Normal Plaza Planned Unit Development is back for a public hearing after a year of delays due to the coronavirus pandemic.

The Normal Town Council will weigh its options on approving the package, which would help businesses looking to move into the Bloomington-Normal enterprise zone.

Pot and the workplace: Despite being legal, it can get you fired

Illinois legalized recreational marijuana in January 2020. Then the pandemic hit, work from home became the norm and the marijuana industry blossomed.

Amari McNabb was found guilty Tuesday of first-degree murder in the shooting death of Bloomington man Juan Nash in April 2019 in Bloomington. 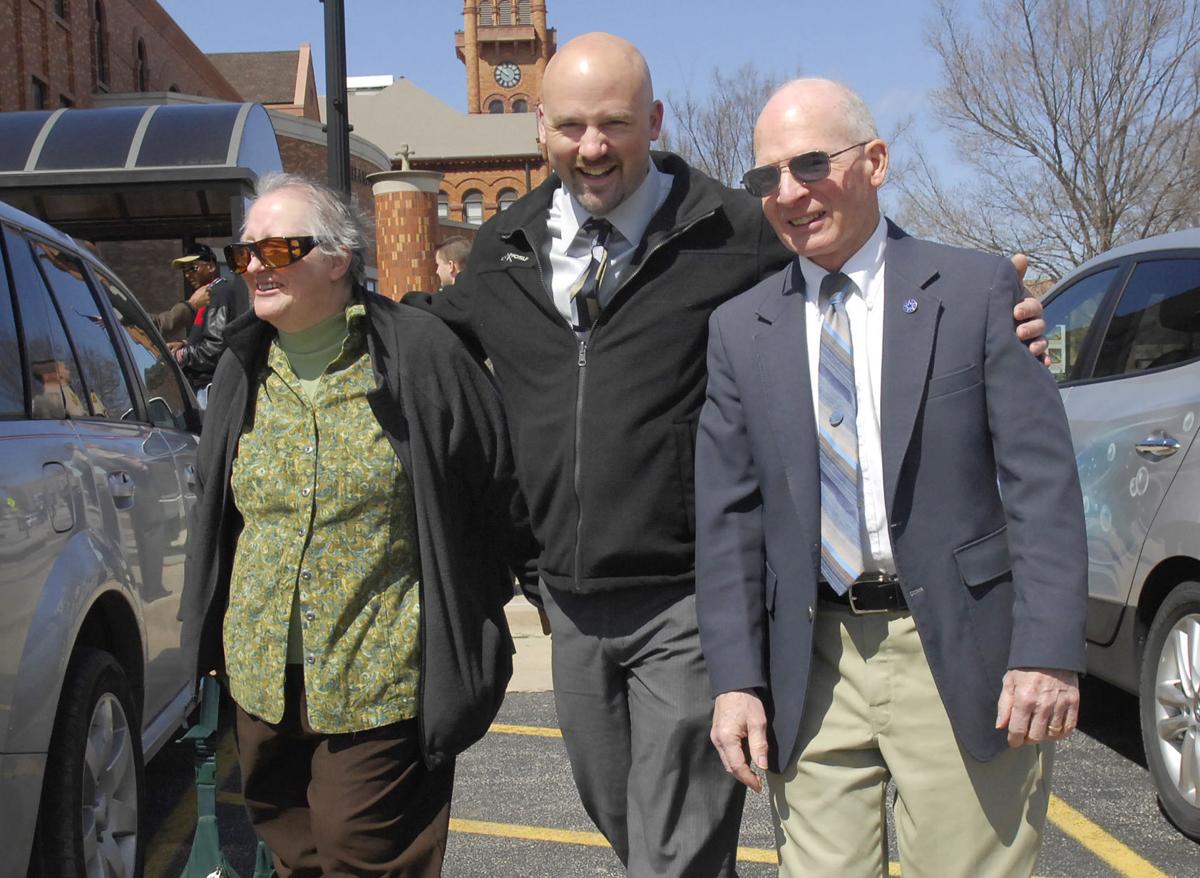 In this Pantagraph file photo, Alan Beaman, center, walks out of the Champaign County Courthouse in Urbana with his parents, Carol and Barry Beaman, in 2013 after winning a certificate of innocence in the murder of Jennifer Lockmiller. 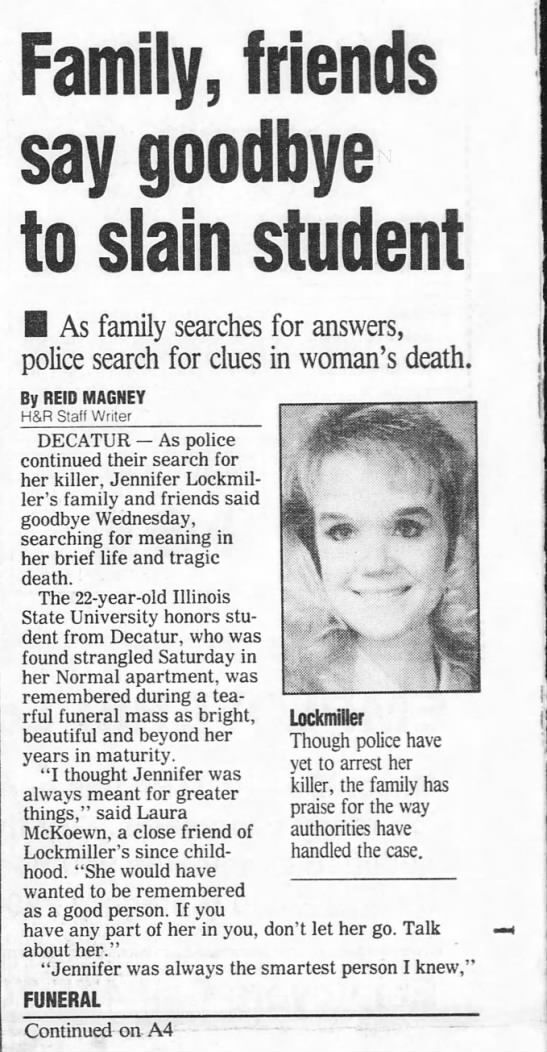 A story from the Sept. 2, 1993, edition of the Herald & Review about the funeral for Jennifer Lockmiller. 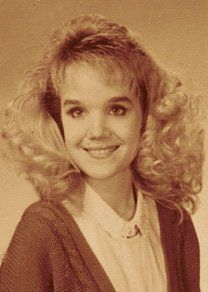