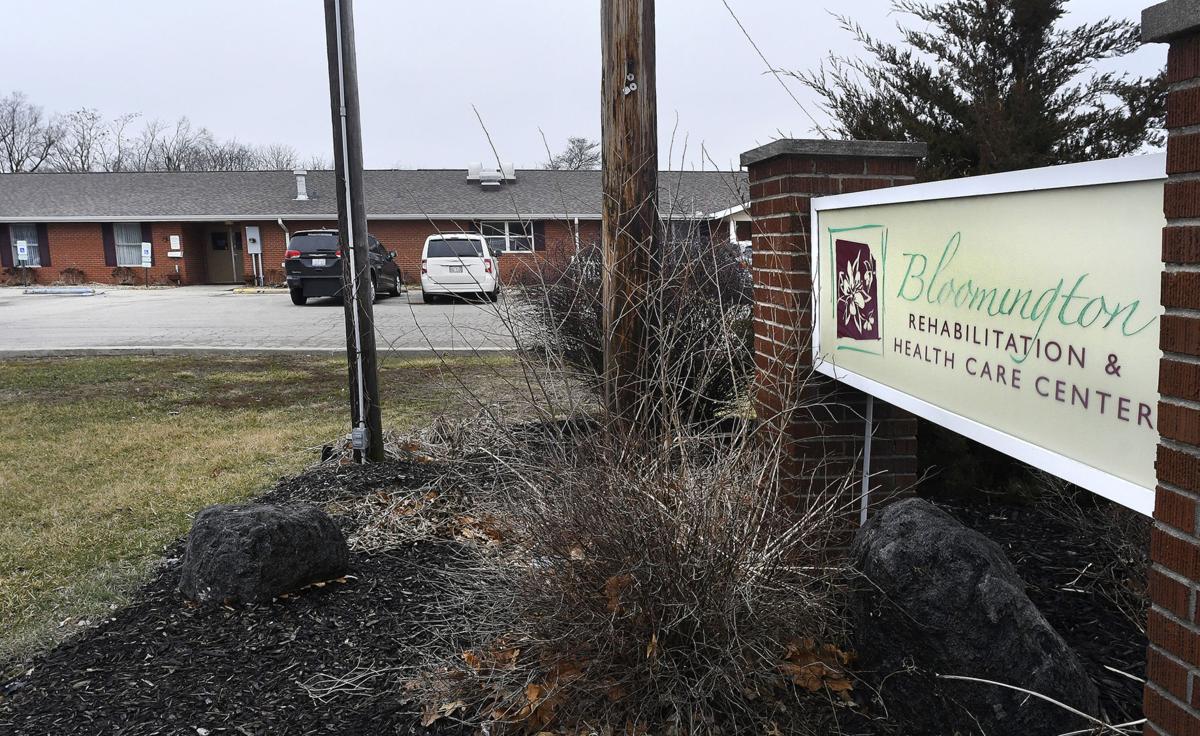 The Bloomington Rehabilitation and Health Care Center is shown Tuesday. A lawsuit has been filed over the death of a woman who had COVID. 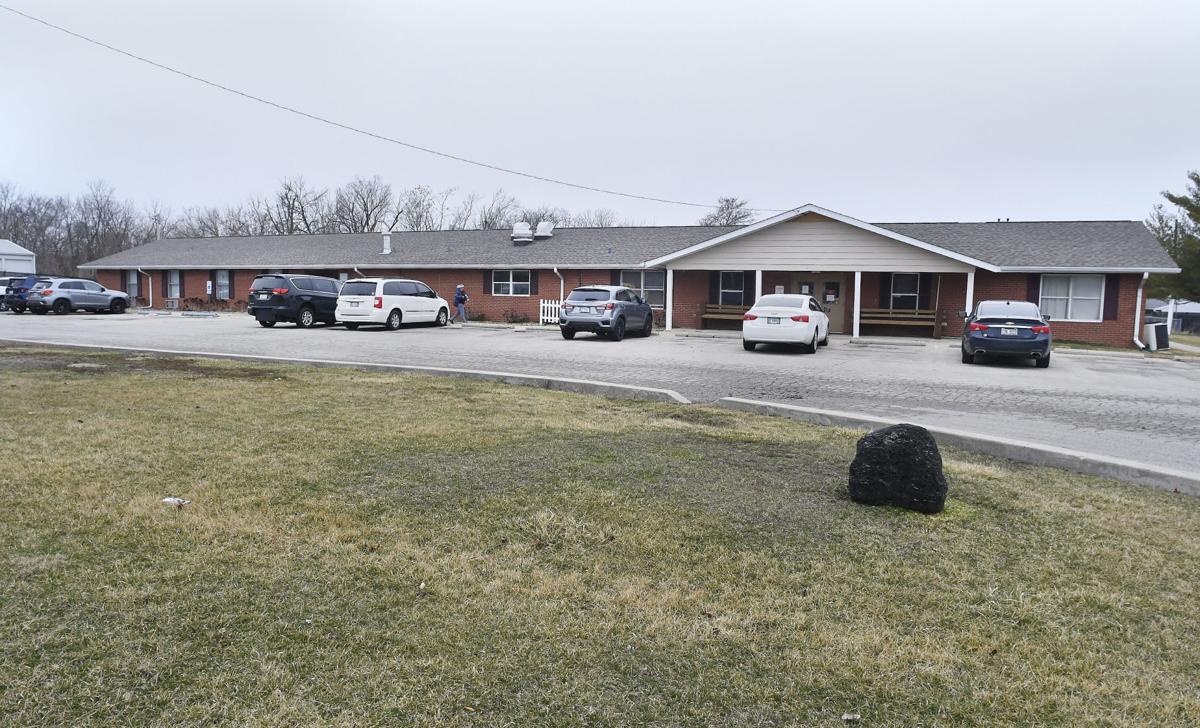 Bloomington Rehabilitation and Health Care Center is being sued in federal court after several residents died of COVID-19 during the pandemic, Tuesday.

BLOOMINGTON — At the center of a wrongful death lawsuit is the question of whether a federal coronavirus emergency declaration means a McLean County nursing home can’t be sued. A lawyer for the plaintiff says the case could set a precedent for COVID-related legal cases.

Anita Martin, the daughter of Marlene Cowans-Hill, is suing Peoria-based Petersen Health Operations, which runs Bloomington Rehabilitation and Health Care at 1925 S. Main St. Hill, 72, a resident of the center, died two days after she was found to have COVID and four other cases were reported there, her lawyers said in court documents.

More than 30 fields of study are part of a transfer agreement signed by Heartland Community College and Illinois Wesleyan University.

The lawsuit, filed in November, points to citations from the Centers for Medicare & Medicaid Services that residents' conditions weren’t properly monitored and alleges “gross negligence” and “willful and wanton neglect.” It seeks “in excess of $50,000” in damages.

Officials for Petersen declined to comment on the case, but in court documents, lawyers say the center is shielded from litigation under the federal Public Readiness and Emergency Preparedness Act for Medical Countermeasures Against COVID-19.

The act gives liability immunity for “loss caused by, arising out of, relating to, or resulting from the manufacture, distribution, administration, or use of medical countermeasures” related to public health emergencies.

However, Megan Shore, a lawyer who represents the family, says Hill’s daughter, Martin, didn’t learn of her mother’s COVID-positive status until after her death. She said their argument is that the federal act shouldn't cover Bloomington Rehab since the facility wasn't actively responding to the coronavirus pandemic.

“We’re saying (Bloomington Rehab) did nothing,” Shore said. “Their failure to act caused an injury, not that a countermeasure caused the injury.”

Petersen Senior Vice President Greg Wilson said the company does “not comment on pending litigation.” Champaign-based attorney Joseph Wetzel was unable to be reached by The Pantagraph.

Hill was one of more than 10,000 long-term care residents who have died of COVID in Illinois. Numerous Illinois nursing homes and other housing facilities for elderly people have been hotspots for COVID. Illinois Department of Public Health data shows 125 deaths were at McLean County long-term care facilities. 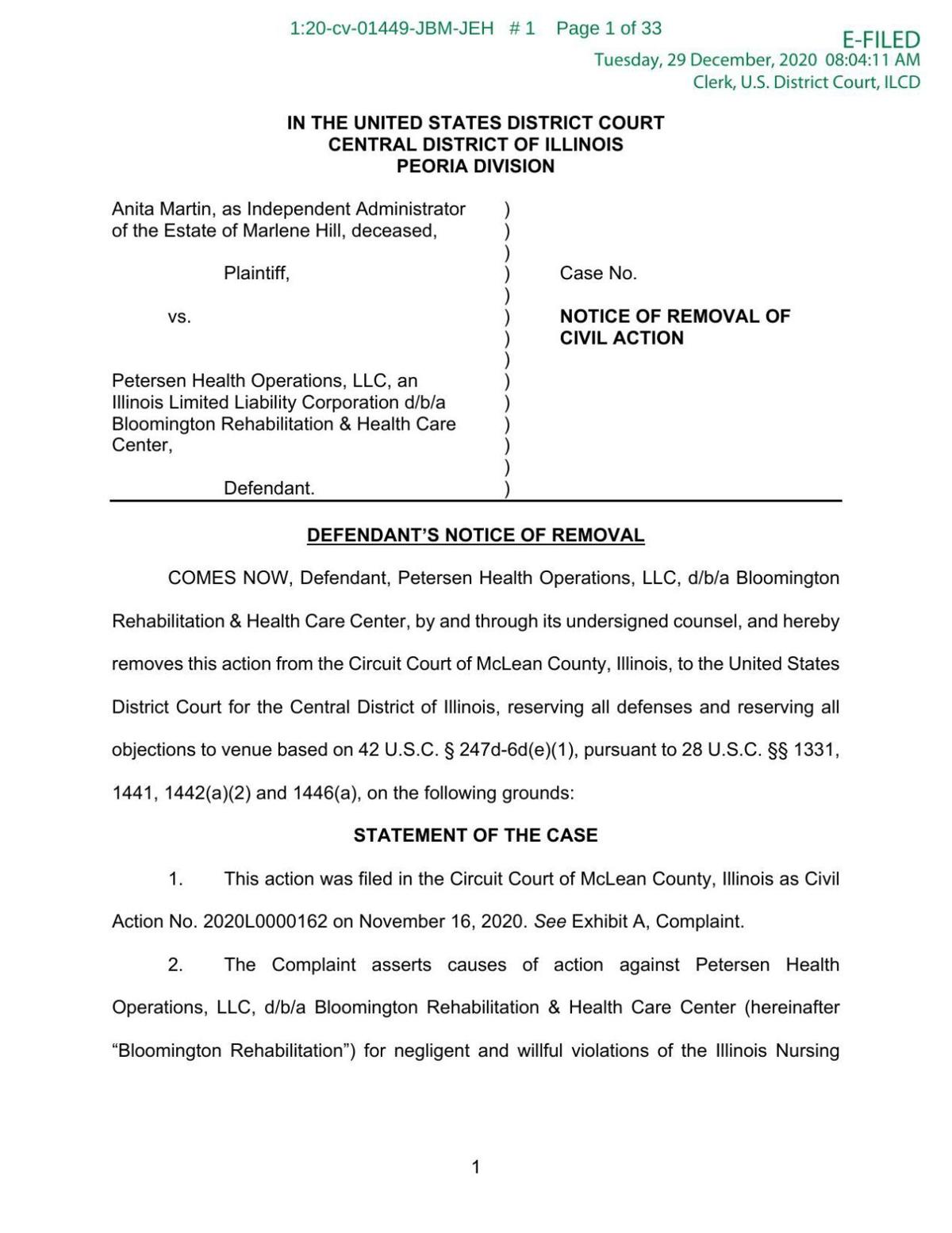 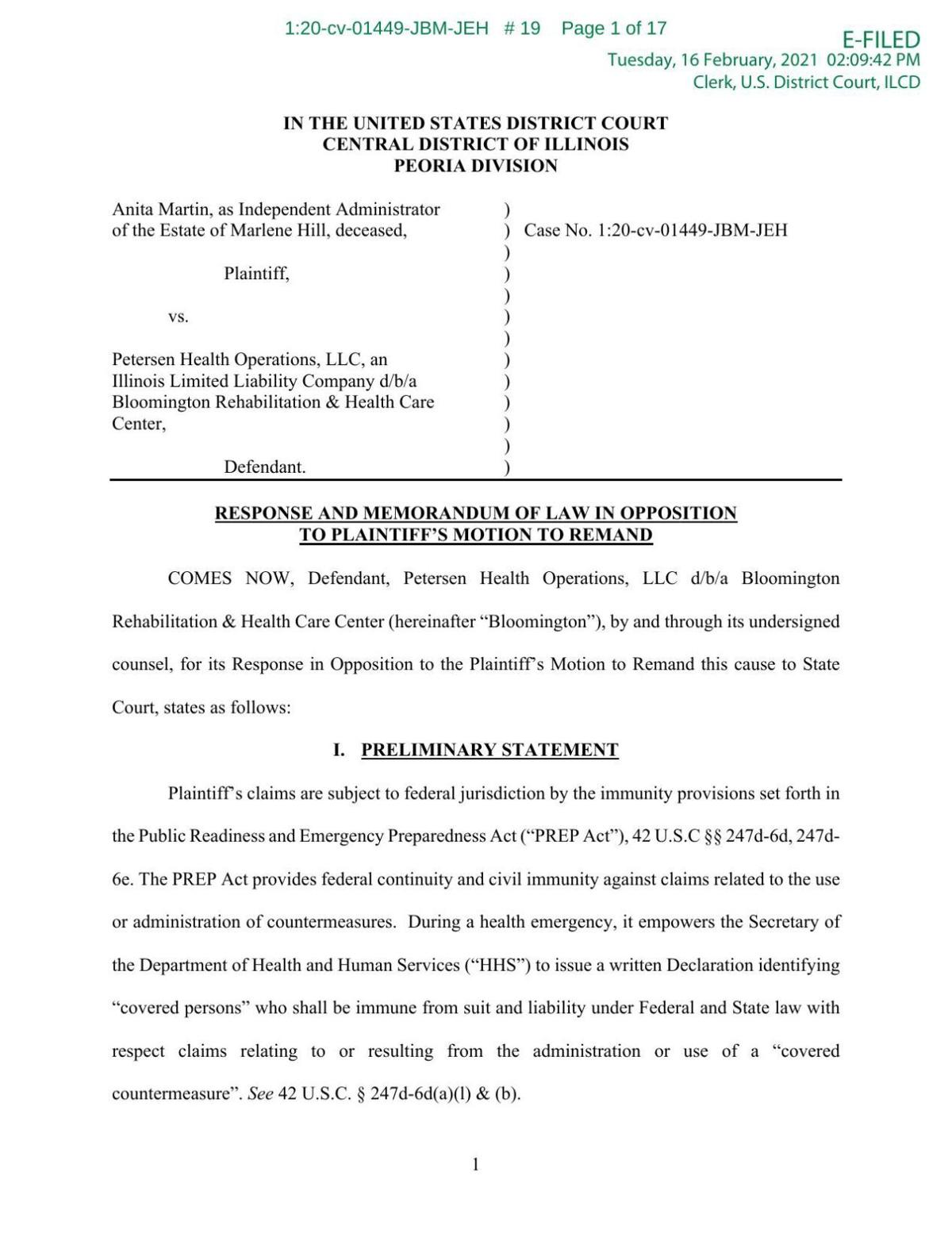 Lawyers in the Hill lawsuit say she reported “shortness of breath, headache and back pain” on May 11, the day after the center had its first outbreak of five COVID cases. Three days later, Hill’s symptoms included “nausea, shortness of breath, generalized aches, fatigue,” and she was taken to OSF St. Joseph Medical Center and treated for pneumonia, according to the lawsuit.

She died a day later of “sepsis due to pneumonia, bilateral pneumonia, end-stage renal disease and COVID-19.” Her death certificate listed the virus as a “substantial contributing factor” to her death.

According to the lawsuit, Hill tested positive for COVID on May 13, the same day Martin called to check on her mother, but Martin was never told about the result.

But while Martin's lawyers argue their case that Bloomington Rehab failed to respond appropriately, a part of Petersen's defense, according to court documents, is that the complaint acknowledges COVID-19 measures were in place at the facility, regardless of whether they were effective.

The use of "adjectives and adverbs" to describe Bloomington Rehab's alleged problems related to COVID-19, respond "all imply that there was some degree of compliance, and thus invoke action as opposed to inaction," court documents say.

A motion to dismiss on behalf of Petersen also says Martin didn't "exhaust" other remedies available to her before deciding to sue the facility.

A date for the next hearing has not yet been set.

All outside Chicago will be vaccine eligible April 12; reopening changes announced

All Illinoisans 16 years of age and older outside of Chicago will be eligible for COVID-19 vaccinations beginning April 12, and the state announced a “metric-based” phase-in to greater reopening Thursday.

The Zoning Board of Appeals approved Jushi Holdings Inc.'s proposal to construct a 40-space parking lot west of its Normal recreational cannabis dispensary.

As an expiration date for the federal government's COVID-19 public health emergency declaration approaches, some Illinois lawmakers are backing a bill aimed at protecting telehealth services beyond the COVID-19 pandemic.

Hong Kong to euthanize at least 2,000 animals after 11 test positive for COVID-19

The Bloomington Rehabilitation and Health Care Center is shown Tuesday. A lawsuit has been filed over the death of a woman who had COVID.

Bloomington Rehabilitation and Health Care Center is being sued in federal court after several residents died of COVID-19 during the pandemic, Tuesday.