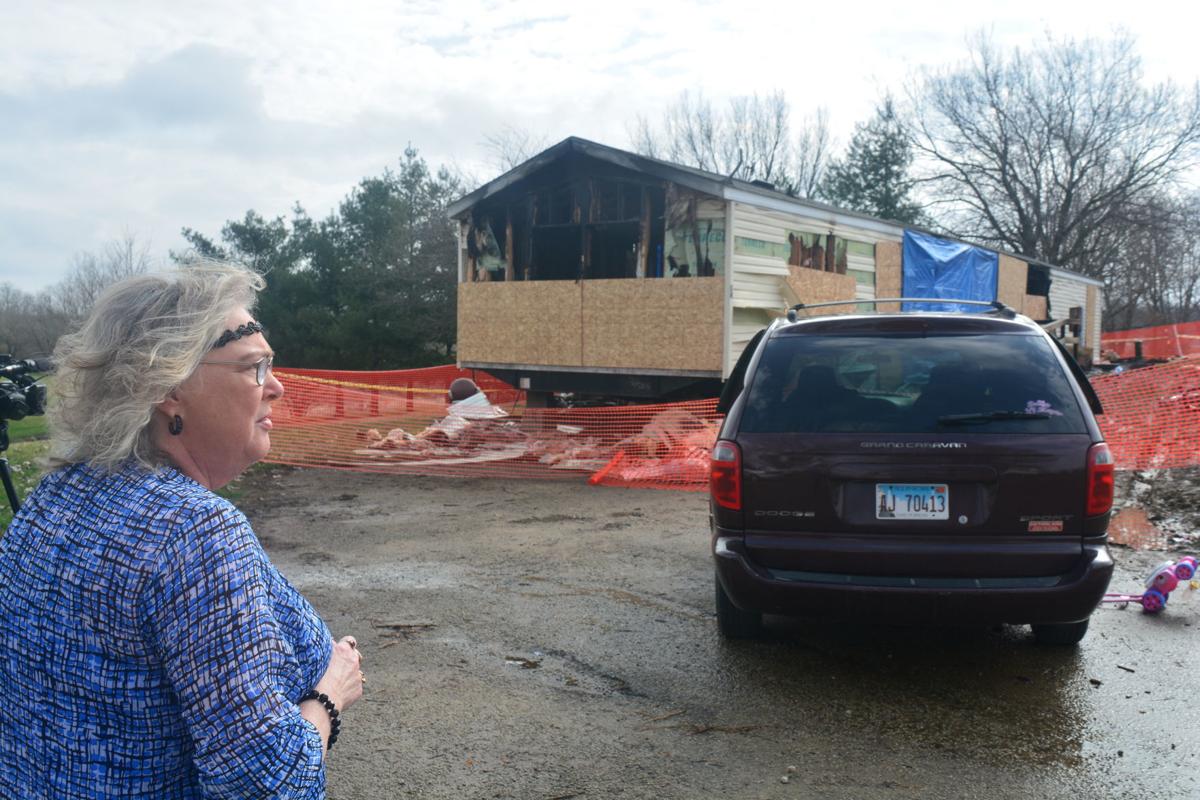 Marie Chockley, a resident of the Timberline Trailer Court, north of Goodfield, surveys the damage caused by a fire on April 6 that killed five residents in a mobile home. The fire is arson, authorities said Thursday. 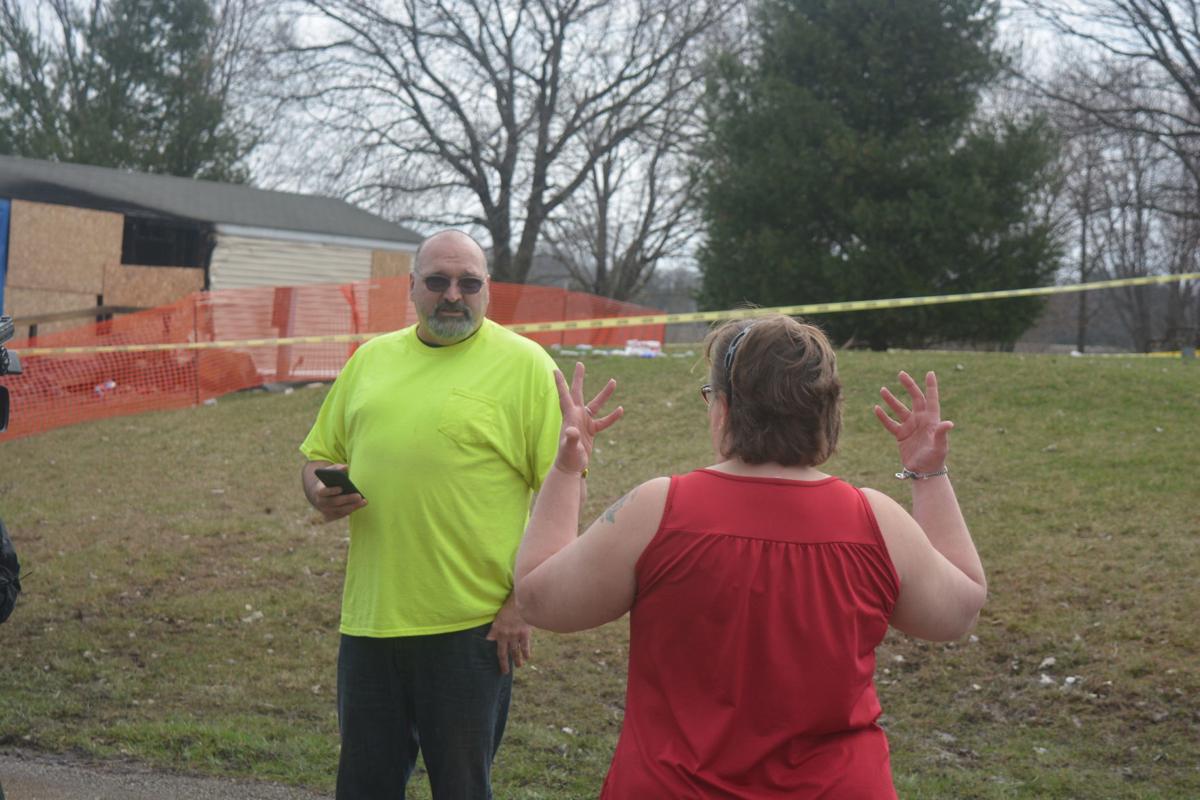 Shawn Johnson, manager of the Timberline Trailer Court in Goodfield, left, visits with resident Anna Marie Siebert about the fatal fire at a mobile home. Five people, including three children, died in the late Saturday night fire. A cause has not yet been determined.

GOODFIELD — Five people, including three children, are dead after an overnight fire at a Goodfield mobile home.

The cause of the fire was not determined on Sunday.

“We were asleep and my son heard the explosions and came and woke us up as he was calling 911,” said a neighbor, Anna Marie Siebert. “My husband and son shot over to see if they could get anyone out. I came over to try and help keep the family back up and away and that’s hard to do because they don’t want to leave.”

Siebert described the scene as “surreal,” and said her son first believed that he heard gunshots, and then realized it was the sound of explosions coming from inside the trailer.

“He looked outside and saw the flames coming out. His first response was to call 911 and get us up,” she said. “It was just a fireball when we got over here. Flames were shooting out from the center of the home and from this end and there was quite a bit of screaming and crying.”

Park Manager Shawn Johnson also was one of the first to arrive on the scene.

“I got a call about the fire and that I needed to get over here,” he said. “I didn’t realize the extent until I came around the corner and saw the flames coming out. The living room area was fully engulfed. When I ran around to the back side, it was even worse. At least three-quarters of the trailer was on fire and I could feel the heat.”

He said a family member of the residents in the trailer lived nearby and was trying to get inside to save them, but was unable to because of the intense heat.

“He was extremely upset and his face was really smokey,” said Johnson.

The family had lived in the trailer for about a year, said Johnson.

“Anytime you lose a life, it’s a big deal, but to the people in this park, it’s heartfelt and hits real close to home,” he said. “I know the folks that were in there. Jason is a combat veteran and we would talk. I was never in combat, but I know just recently he was going to get help from the Veterans Administration. He was a quiet guy and never bothered anyone. He had a job at the local gas station for a while."

Siebert said she also saw the family on several occasions.

“They were a nice family and would always say hello,” Siebert said. “It was always fun to see the kids playing outside.”

“I kept hearing it over in my head all night long, just children crying and moms crying for their babies. It’s horrible. I have spent years in EMS and like Shawn in the service, we have been seasoned. It never leaves. You just want to go in and hug all of your children and grandchildren and neighbors.”

Residents of the Timberline Trailer Court gathered outside their homes Sunday morning to console each other.

“My granddaughter came and woke me up and told me there was a fire and we might have to leave,” said Marie Chockley, who lives a few blocks from the destroyed mobile home. “I looked out and the flames were really high in the air. What a terrible tragedy, such a terrible loss. Bless their hearts.”

Goodfield is located off of Interstate 74, about 20 miles west of the Twin Cities.

Cause of fatal fire in Hopedale under investigation

Neighbors look for ways to help survivors of Goodfield fire

Bomb cyclone to blow through Central Illinois with damaging winds

BLOOMINGTON — A storm system developing out west could drop several inches of snow across the Plains, but in Central Illinois the biggest thre…

GOODFIELD — A fire that killed five people, including three children, earlier this month at a Goodfield mobile home park was intentionally set…

Murder charges have been filed against a 9-year-old in connection with a fatal mobile-home fire near Goodfield. Woodford County State’s Attorney Greg Minger said the juvenile is not in custody. Specifics on where the juvenile is and living arrangements were not available.

The mother of a child charged with the murder of five people in a deadly fire near Goodfield in April, told a national television network that her son has recently been diagnosed with a form of schizophrenia, ADHD, and bipolar disorder.

GOODFIELD — Five members of a family died and a 9-year-old boy faces murder and arson charges following a fire near Goodfield in April.

Marie Chockley, a resident of the Timberline Trailer Court, north of Goodfield, surveys the damage caused by a fire on April 6 that killed five residents in a mobile home. The fire is arson, authorities said Thursday. 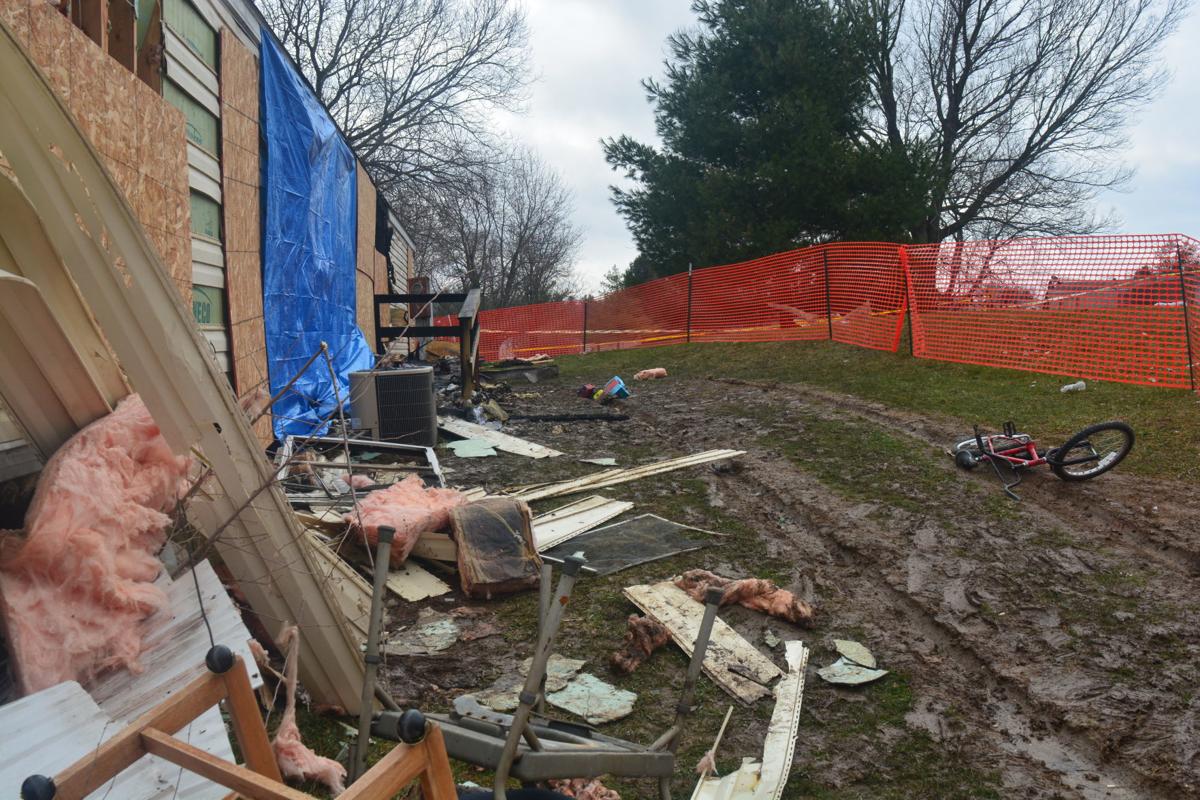 A fire at a mobile home in Goodfield in Woodford County claimed the lives of five people, including three children, late April 6. 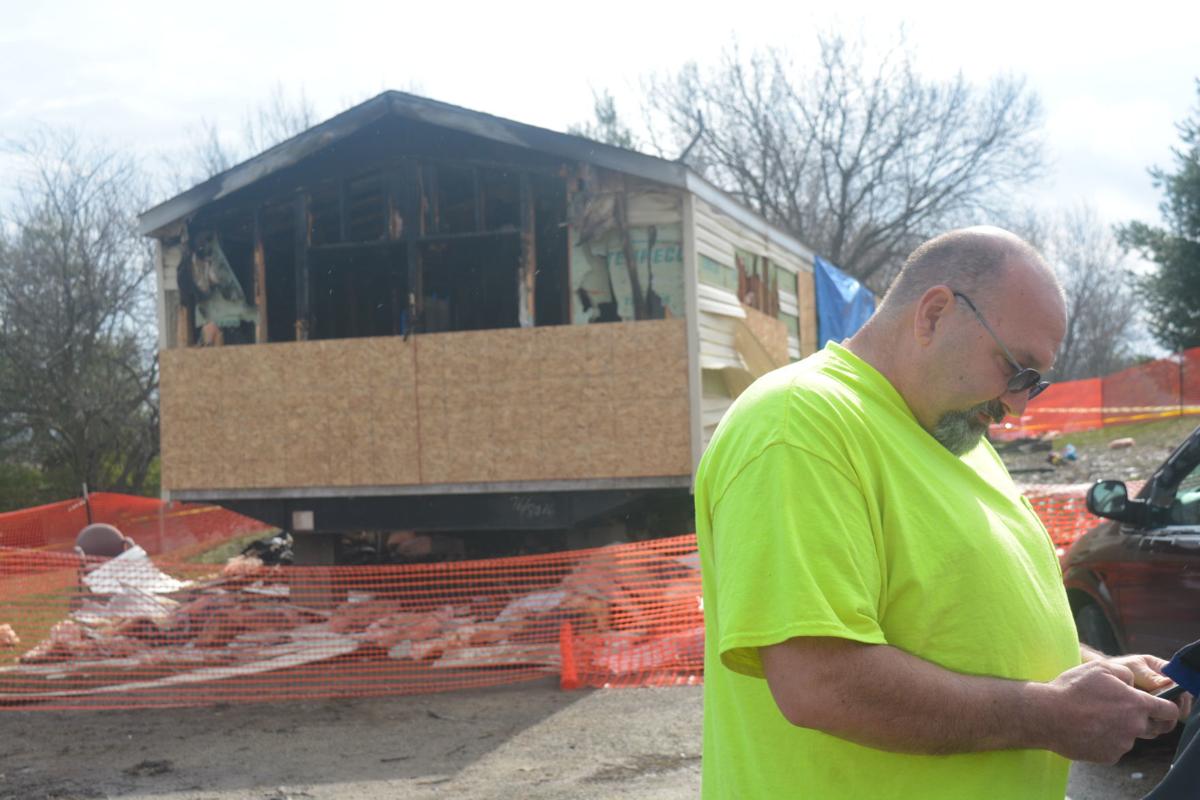 Shawn Johnson, manager of the Timberline Trailer Court in Goodfield, on Sunday, April 7, 2019, looks at video from a fire the night before at a mobile home near Goodfield that killed five people.

Shawn Johnson, manager of the Timberline Trailer Court in Goodfield, left, visits with resident Anna Marie Siebert about the fatal fire at a mobile home. Five people, including three children, died in the late Saturday night fire. A cause has not yet been determined.