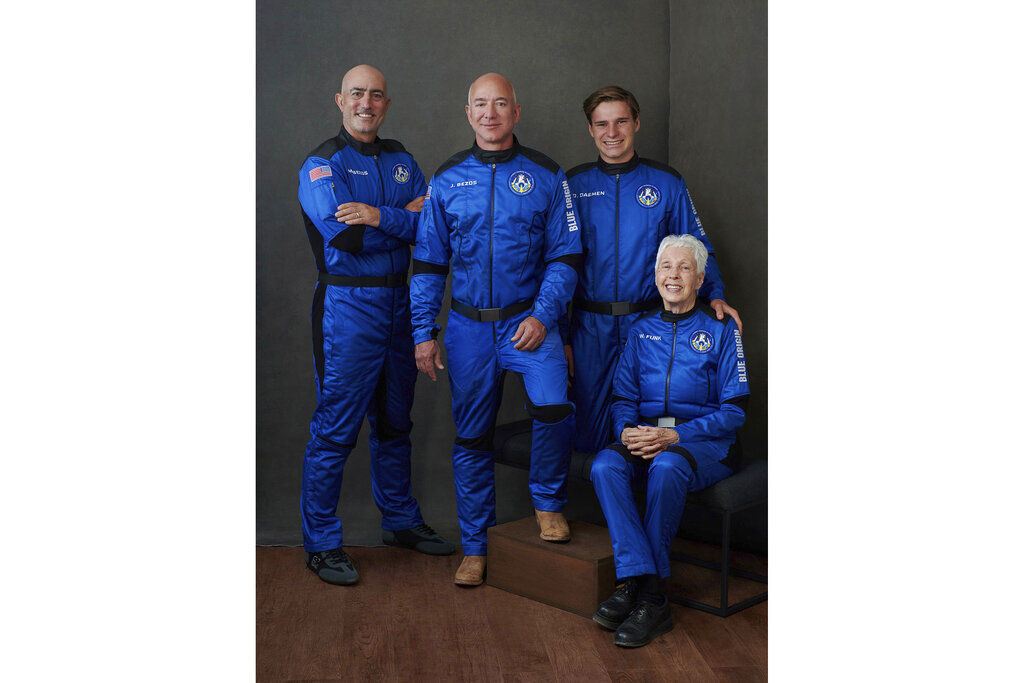 In this photo provided by Blue Origin, from left to right: Mark Bezos, brother of Jeff Bezos; Jeff Bezos, founder of Amazon and space tourism company Blue Origin; Oliver Daemen, of the Netherlands; and Wally Funk, aviation pioneer from Texas, pose for a photo. (Blue Origin via AP)

The SUV was prominently shown during the live-stream of the event shuttling Bezos and others to the site in Texas.

Bezos, the chairman of Amazon, is an investor in the electric vehicle company, which is ramping up production at its Normal plant.

The vehicles are now being tested in California, Oklahoma and other states.

Last week, Rivian announced that delivery of the SUV — the company's first production vehicle, retailing for $75,000 — would be delayed until September, citing a global shortage of microchips. Other automakers are seeing similar problems.

Jeff Bezos and his crew are on their way to the Blue Origin spacecraft, where they will soon blast off into space https://t.co/5C820HM4EM pic.twitter.com/j4tyTM12pU

The company is also building a pickup set for launch in the fall. Rivian began taking preorders for the vehicles in November.

The Pantagraph this weekend reported on how Rivian's overhaul of the former Mitsubishi plant has sparked new interest in the area surrounding it. Read the story here.

The video feed showed Bezos and others loading into the vehicle before the launch.

Blue Origin in May released a video of Bezos driving a Rivian vehicle to the capsule landing area in Texas.

Jeff Bezos blasts into space on own rocket: 'Best day ever'

VAN HORN, Texas — Jeff Bezos blasted into space Tuesday on his rocket company’s first flight with people on board, becoming the second billionaire in just over a week to ride his own spacecraft.

The Amazon founder was accompanied by a hand-picked group: his brother, an 18-year-old from the Netherlands and an 82-year-old aviation pioneer from Texas — the youngest and oldest to ever fly in space.

“Best day ever!” Bezos said when the capsule touched down on the desert floor at the end of the 10-minute flight.

Named after America’s first astronaut, Blue Origin’s New Shepard rocket soared from remote West Texas on the 52nd anniversary of the Apollo 11 moon landing, a date chosen by Bezos for its historical significance. He held fast to it, even as Virgin Galactic’s Richard Branson pushed up his own flight from New Mexico in the race for space tourist dollars and beat him to space by nine days.

Unlike Branson’s piloted rocket plane, Bezos’ capsule was completely automated and required no official staff on board for the up-and-down flight.

Blue Origin reached an altitude of about 66 miles, more than 10 miles higher than Branson’s July 11 ride. The 60-foot (18-meter) booster accelerated to Mach 3 or three times the speed of sound to get the capsule high enough, before separating and landing upright.

The passengers had several minutes of weightlessness to float around the spacious white capsule. The window-filled capsule landed under parachutes, with Bezos and his guests briefly experiencing nearly six times the force of gravity, or 6 G’s, on the way back.

Led by Bezos, they climbed out of the capsule after touchdown with wide grins, embracing parents, partners and children, then popped open bottles of sparkling wine, spraying one another.

Sharing Bezos’ dream-come-true adventure was Wally Funk, from the Dallas area, one of 13 female pilots who went through the same tests as NASA’s all-male astronaut corps in the early 1960s but never made it into space.

Joining them on the ultimate joyride was the company’s first paying customer, Oliver Daemen, a last-minute fill-in for the mystery winner of a $28 million auction who opted for a later flight. The Dutch teen’s father took part in the auction, and agreed on a lower undisclosed price last week when Blue Origin offered his son the vacated seat.

“I got goose bumps,” said Angel Herrera after the capsule landed. “The hair on the back of my neck stood up, just witnessing history.”

Herrera, who lives in El Paso, was one of a few dozen people who watched the launch from inside Van Horn High School, about 25 miles (40 kilometers) away.

Jeff Bezos blasts into space on own rocket: 'Best day ever!'

The recycled rocket and capsule that carried up Tuesday’s passengers were used on the last two space demos, according to company officials.

Virgin Galactic already has more than 600 reservations at $250,000 apiece. Founded by Branson in 2004, the company has sent crew into space four times and plans two more test flights from New Mexico before launching customers next year.

Blue Origin’s approach was slower and more deliberate. After 15 successful unoccupied test flights to space since 2015, Bezos finally declared it was time to put people on board. The Federal Aviation Administration agreed last week, approving the commercial space license.

Bezos, 57, who also owns The Washington Post, claimed the first seat. The next went to his 50-year-old brother, Mark Bezos, an investor and volunteer firefighter, then Funk and Daemen. They spent two days together in training.

University of Chicago space historian Jordan Bimm said the passenger makeup is truly remarkable. Imagine if the head of NASA decided he wanted to launch in 1961 instead of Alan Shepard on the first U.S. spaceflight, he said in an email.

“That would have been unthinkable!” Bimm said. “”It shows just how much the idea of who and what space is for has changed in the last 60 years.”

Bezos stepped down earlier this month as Amazon’s CEO and just last week donated $200 million to renovate the National Air and Space Museum. Most of the $28 million from the auction has been distributed to space advocacy and education groups, with the rest benefiting Blue Origin’s Club for the Future, its own education effort.

Fewer than 600 people have reached the edge of space or beyond. Until Tuesday, the youngest was 25-year-old Soviet cosmonaut Gherman Titov and the oldest at 77 was Mercury-turned-shuttle astronaut John Glenn.

Both Bezos and Branson want to drastically increase those overall numbers, as does SpaceX’s Elon Musk, who’s skipping brief space hops and sending his private clients straight to orbit for tens of millions apiece, with the first flight coming up in September.

Despite appearances, Bezos and Branson insist they weren’t trying to outdo each other by strapping in themselves. Bezos noted this week that only one person can lay claim to being first in space: Soviet cosmonaut Yuri Gagarin, who rocketed into orbit on April 12, 1961.

“This isn’t a competition, this is about building a road to space so that future generations can do incredible things in space,” he said on NBC’s ”Today.”

Blue Origin is working on a massive rocket, New Glenn, to put payloads and people into orbit from Cape Canaveral, Florida. The company also wants to put astronauts back on the moon with its proposed lunar lander Blue Moon; it’s challenging NASA’s sole contract award to SpaceX.

Bezos, Blue Origin Crew Lift Off in Flight to Space

Jul.20 -- Jeff Bezos, his brother, and two others blast off on the New Shepard built by Blue Origin for an 11-minute flight to ascend beyond t…

"We went through a spell of no traffic when Mitsubishi left," said David Hruska, who lives near the Rivian plant. "Now it's back to the way it was."

A shortage of semiconductors, many of which are made in Asia, has caused widespread ripples in several sectors worldwide.

Rivian under the deal will pay to design and install the chargers, and cover costs related to upgrading utilities, network access fees, equipment service and charger maintenance for the next 10 years.

Electric vehicle startup Rivian Automotive intends to build a second U.S. assembly plant, the latest sign that the company is gaining legitimacy as an American automaker. 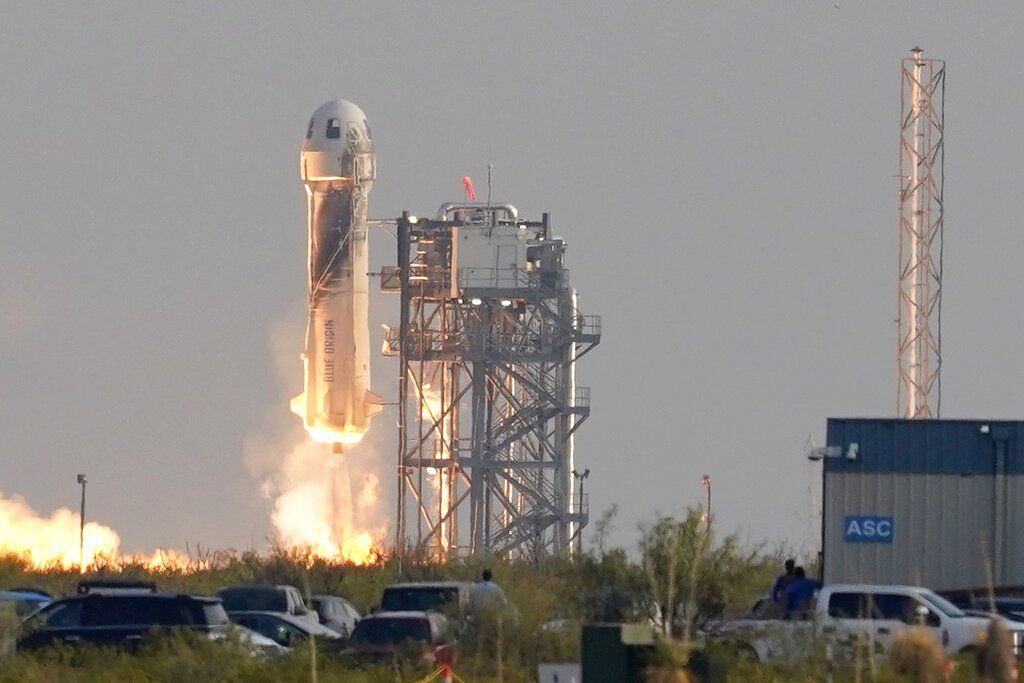 In this photo provided by Blue Origin, from left to right: Mark Bezos, brother of Jeff Bezos; Jeff Bezos, founder of Amazon and space tourism company Blue Origin; Oliver Daemen, of the Netherlands; and Wally Funk, aviation pioneer from Texas, pose for a photo. (Blue Origin via AP)