BLOOMINGTON — Don't call it a comeback.

While the McLean County Fair will look as close to normal as possible one year after a pandemic, organizers remain proud of their efforts that split last year's event into multiple, virtual parts that still allowed 4-H'ers the chance to show off their work.

Still, the excitement of being able to physically return to the fairgrounds Aug. 4 to 8 on west Bloomington's Interstate Drive is palpable.

"Everyone that I've talked to is just thankful that we can have something in person — that's been across the board," 4-H Youth Development coordinator Kaitlyn Prehoda said. "Not having a year in person — that really threw me off, but we're good to go."

"I didn't know if I was going to have a full partnership with 4-H this year until actually June, when the state 4-H office allowed county offices ... to hold five-day county fairs," Swartz said. "In June, (the University of Illinois) Extension Office says, 'We're all in,' all of a sudden the floodgates open for us."

Last year, carnival rides, food vendors and live music were canceled, while 4-H project judging moved to an online format, with the exception of youth livestock shows, which, while modified, were still held in person.

"We're still trying to bounce back from the pandemic," 4-H Educator Katie Buckley said. "We're definitely better than last year, but we still have room for growth."

Admissions for the "World's Largest 4-H Fair" ranges from at-the-gate prices of $5 for children 13 and under to $8 for everyone over 13, but discounts on tickets and admission-inclusive grandstand purchases can be found online.

Among the most popular 4-H projects at the fair this year? Visual arts.

The category drew at least one member of the Carlock-based Frietsch family to 4-H this year, despite any lingering fears of the pandemic. Scott and Marissa Frietsch's daughter Molly entered 4-H for the first time this year, participating in photography as well as Cooking 101.

"We kind of are just starting the process," Marissa Frietsch said. "If you've done it before, it might be easier. When we first joined, everything was still virtual; our club has only had two meetings in person. So, we're still kind of new to it and it's still kind of trial by error."

While judging will be done in person for 4-H projects this year, organizers have dedicated a set time for it, with participants bringing their projects in and being judged in the moment, versus setting up their projects ahead of time and lingering while judges made the rounds.

Also back this year will be live entertainment, ranging from a demolition derby and tractor pull to a Thursday night concert of by Jameson Rodgers and Clayton Shay, as well as Central Illinois' The Natu Band.

On Friday, Black Stone Cherry with play at the grandstand with Head East and Joe Hermes. Tickets range from $20 to $30, depending on seating, and the price includes fair admission.

Non-music entertainment options range from a demolition derby Saturday night as well as a range of free events on the grounds, including a petting zoo, a Wheels of Agriculture trivia game and show, a Rhinestone Roper show and a fortune teller.

Although Swartz said some of the fair preparation remains chaotic, he and other leaders echoed the same sentiment: Back in person is an improvement from last year.

The Frietsch family agrees — even if there have been challenges.

"Yes, it's the fun and it's the groups and it's the fair and it's the community, but it's about those life skills that are centered around making kids become better adults in their future," Marissa Frietsch said. "It's really new to our whole family and we're still learning, but we have confidence that it will be great."

A shortage of semiconductors, many of which are made in Asia, has caused widespread ripples in several sectors worldwide.

An intense series of thunderstorms in southwestern McLean County has caused extensive flooding of roads in the areas of McLean and Heyworth, especially along Kickapoo Creek.

The next classes are set for July 20 and Aug. 26 in Bloomington-Normal.

The McLean County Fair crowned Brady Veal and Reagan Parks as King and Queen at the Royalty Scholarship Competition on Aug. 4.

'Dune' is a smash for Warner Brothers at box office

'Dune' is a smash for Warner Brothers at box office Andrea Frietsch, 6, Carlock, a member of the 4-H Cloverbud program, talks with her father, Scott, as they attend 4-H Fair registration for the McLean County County Fair on Tuesday at the fairgrounds in Bloomington. 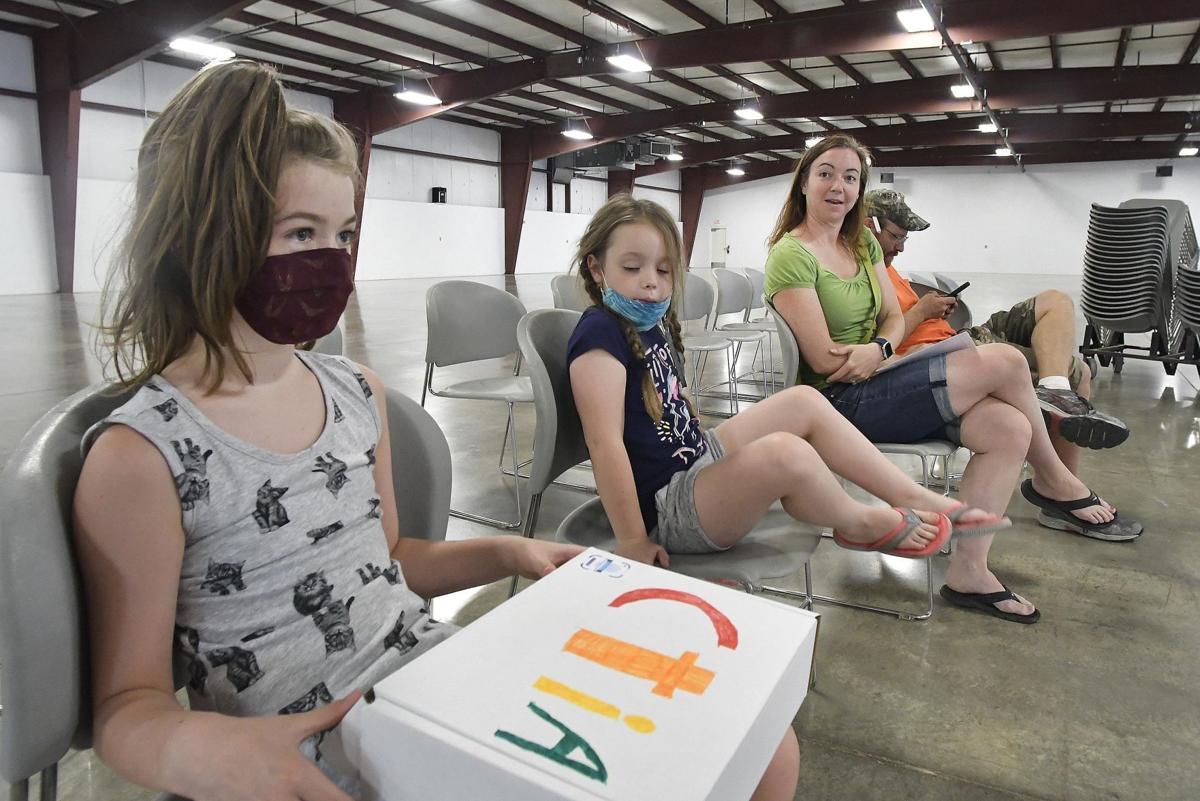 Molly Frietsch, 9, Carlock, left, a member of the Ardent Tillers 4-H Club, her sister Andrea, 6, mother, Marissa, and father, Scott, wait for a tour of the McLean County County Fairgrounds on Tuesday during 4-H member registration.