ATLANTA — By the time 2-year-old Sammy had gotten a Palms Grill hot dog smeared on his face, he had already picked out a toy car to take home from the first Market Weekend on Route 66 in Atlanta.

His sister, 6-year-old Izzy, was still searching, though, Sunday afternoon.

“Sammy got a car. It took him a while to pick one out, but he found one,” said their dad, Cory Allen, of Wapella. “Izzy may get one of those stuffed animals over there or maybe a magnet.”

The magnets didn’t hold her attention for long, as she was soon slipping through the small groups gathered around the 26 vendors posted on Southwest Arch Street.

The Allens were among the flow of visitors who made their way through the Logan County city on Sunday, though the sunny weekend brought more people out on Saturday, said Whitney Ortiz, tourism development director for Atlanta.

The weekend turnout went even better than she expected, she said.

“We had about 500 people in town yesterday, which for Atlanta is quite a lot in one day coming through,” Ortiz said. “Very pleased with the turnout yesterday. Today, it’s a Sunday so I assumed it would be a little bit slower, but it’s still been pretty good.”

She said the diversity of vendors may have contributed to the success of the weekend, with items including jewelry, T-shirts, paintings, engraved goods, dog treats, keychains, dairy products, toys, knitted and crocheted items, gifts and more.

Angie Gaddy, co-owner of Hearts 2 Home Boutique in Stanford, said with the cooperative weather, the market had gone really well and they look forward to coming back next year.

Dave and Shannon Stone of Atlanta hadn’t made any purchases yet when they were looking over the home décor items at the Hearts 2 Home booth, but they said they likely would by the end of the day.

“We hope they do more of this,” Shannon Stone said. “This is the first time they’ve ever done it and I was kind of excited they’re doing something big this year.”

“And something new,” Dave added.

As a Route 66 town with a few tourism draws, like the smiley water tower and the hot dog-holding 19-foot-tall Paul Bunyan statue downtown, the Stones said these kinds of events are important for Atlanta.

“This is definitely good for us as a tourist town. It’s good to get these events going to bring more people here and learn the history of it and have a look around,” Shannon said.

The Route 66 Memories Museum & Shop, Route 66 Arcade Museum and Atlanta Museum were open to the public throughout the weekend. The Atlanta Public Library also hosted a cutest pet competition inside the visitors center, with donations going to the Humane Society of Logan County.

“With the Route 66 museums and stuff, it’s nice to bring attractions or people to the attractions,” said Danielle Miesner of Atlanta.

She and her husband, Craig, came out for both days of the market and said though they hope to see more vendors in the future, “I think it’s neat.”

Danielle Miesner was sure to check out the knitting and crochet creations made by Brooke Evans, looking for ideas for her own projects.

Evans, of Bloomington, said she’s been knitting and crocheting as a hobby for about 12 years.

“I just like trying out new patterns and when I like one, I make a lot of that item and I kind of just sell as I feel, what I feel people want,” she said from her In-A-Stitch booth. “I started with just scarves and baby blankets and made my way into hats and then animals in the last year.”

The handmade stuffed animals captured Izzy Allen’s attention, as well as that of most of the children who made their way through the market.

All the stuffed animals on display were completed in about two and half weeks, once Evans found out about the Market Weekend.

Evans said she would definitely like to come back to a future market and next time, “I’ll give myself more time to prepare. Two weeks wasn’t a lot (of time). My shoulders and hands didn’t like me very much.”

A BMW cruise-in drew a crowd Saturday afternoon, and on Sunday it was Jeep fans’ turn.

“It’s just been a fun weekend. We couldn’t have asked for better weather, especially after the horrible rain we’ve had the past 30 days,” Ortiz said. “I think for the first time we’ve done it, it’s been a phenomenal success.”

Alanis Morissette is not supporting the documentary film about her life

Alanis Morissette is not supporting the documentary film about her life 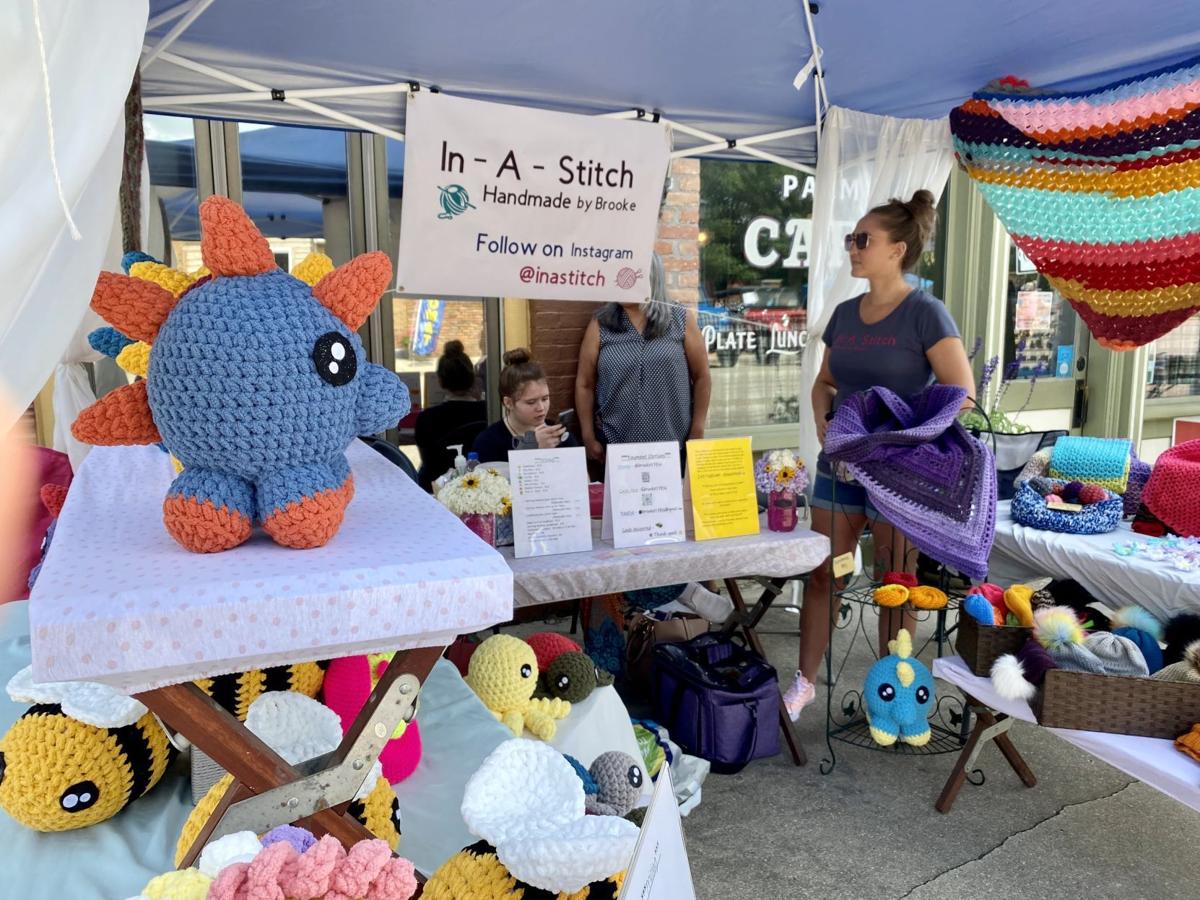 Brooke Evans of Bloomington sells handmade knitted and crocheted items at the first Market Weekend on Route 66 in Atlanta on Sunday. 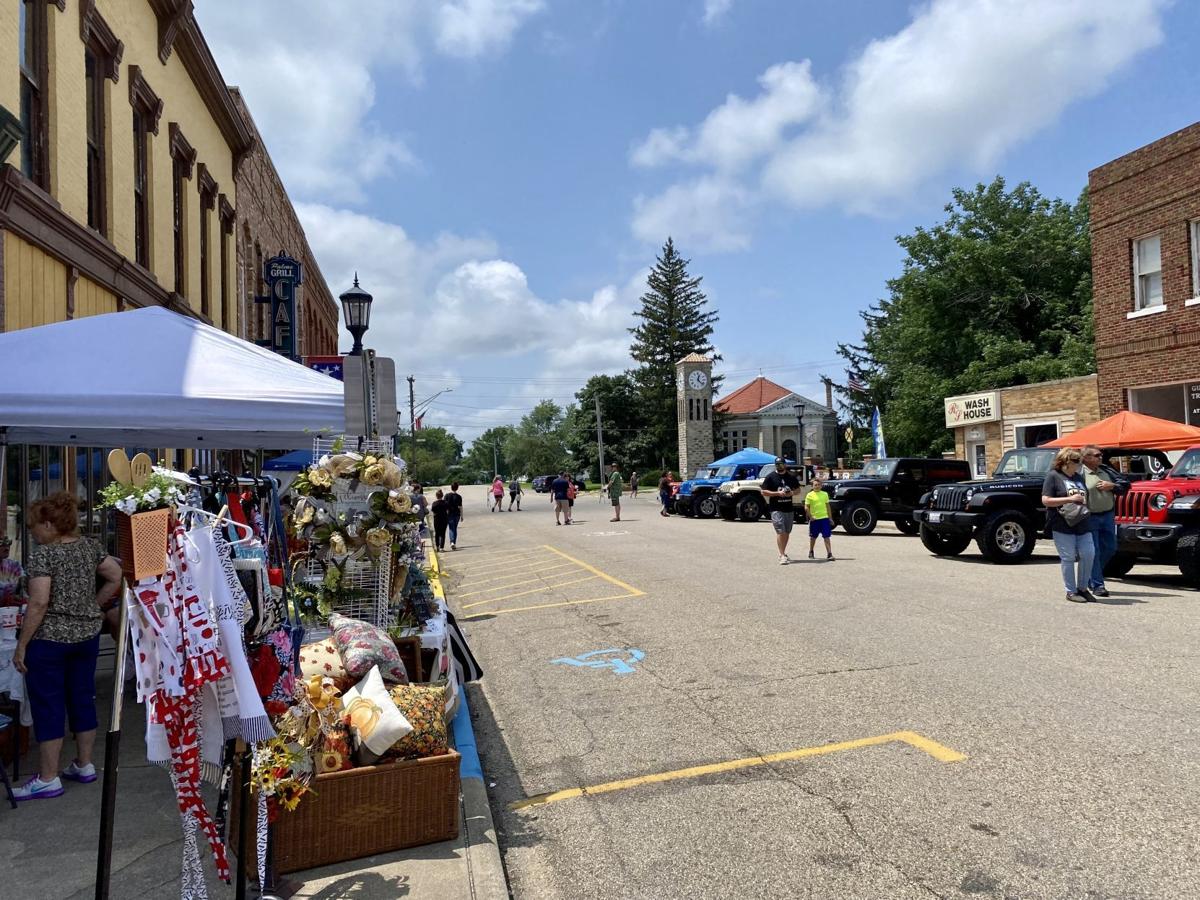 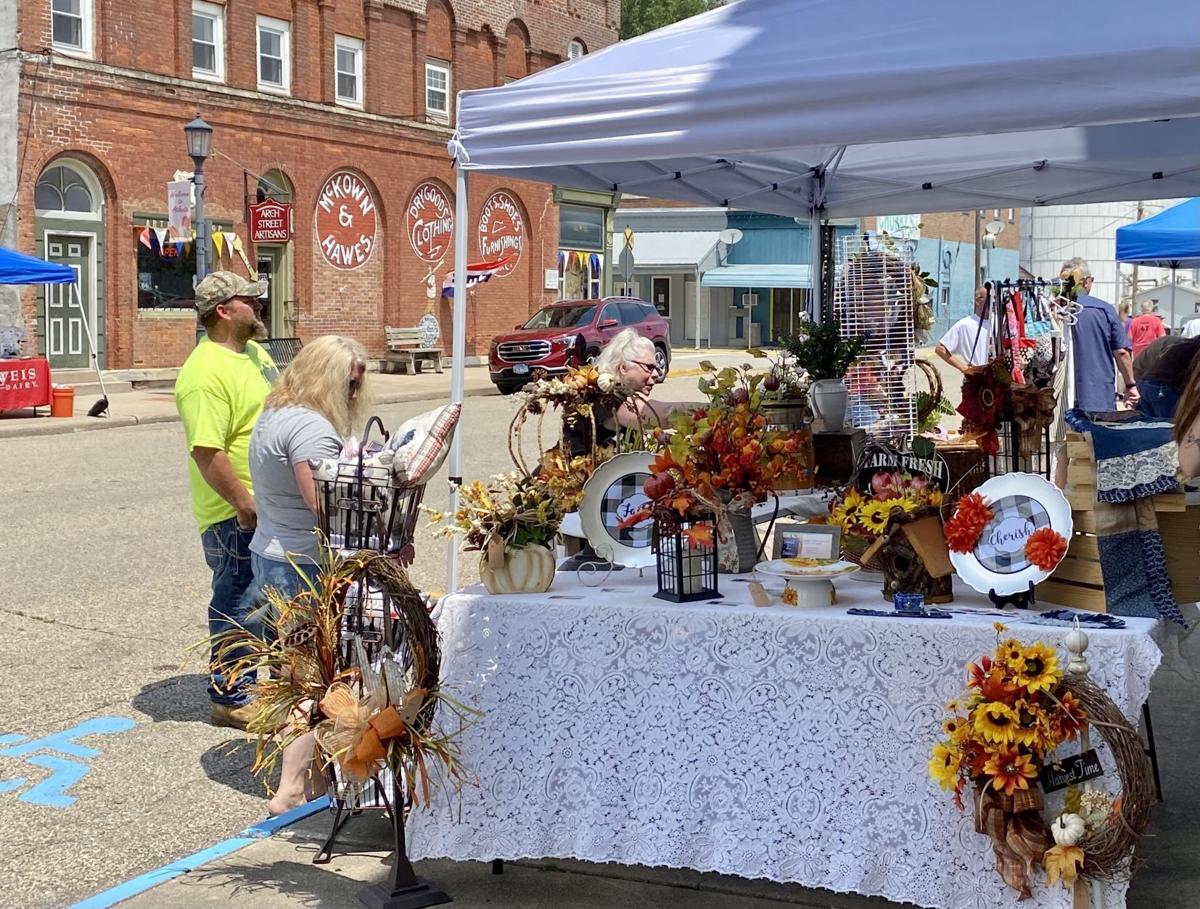 Dave and Shannon Stone of Atlanta shop at the Heart 2 Home Boutique booth as part of the city's first Market Weekend on Route 66 on Sunday. 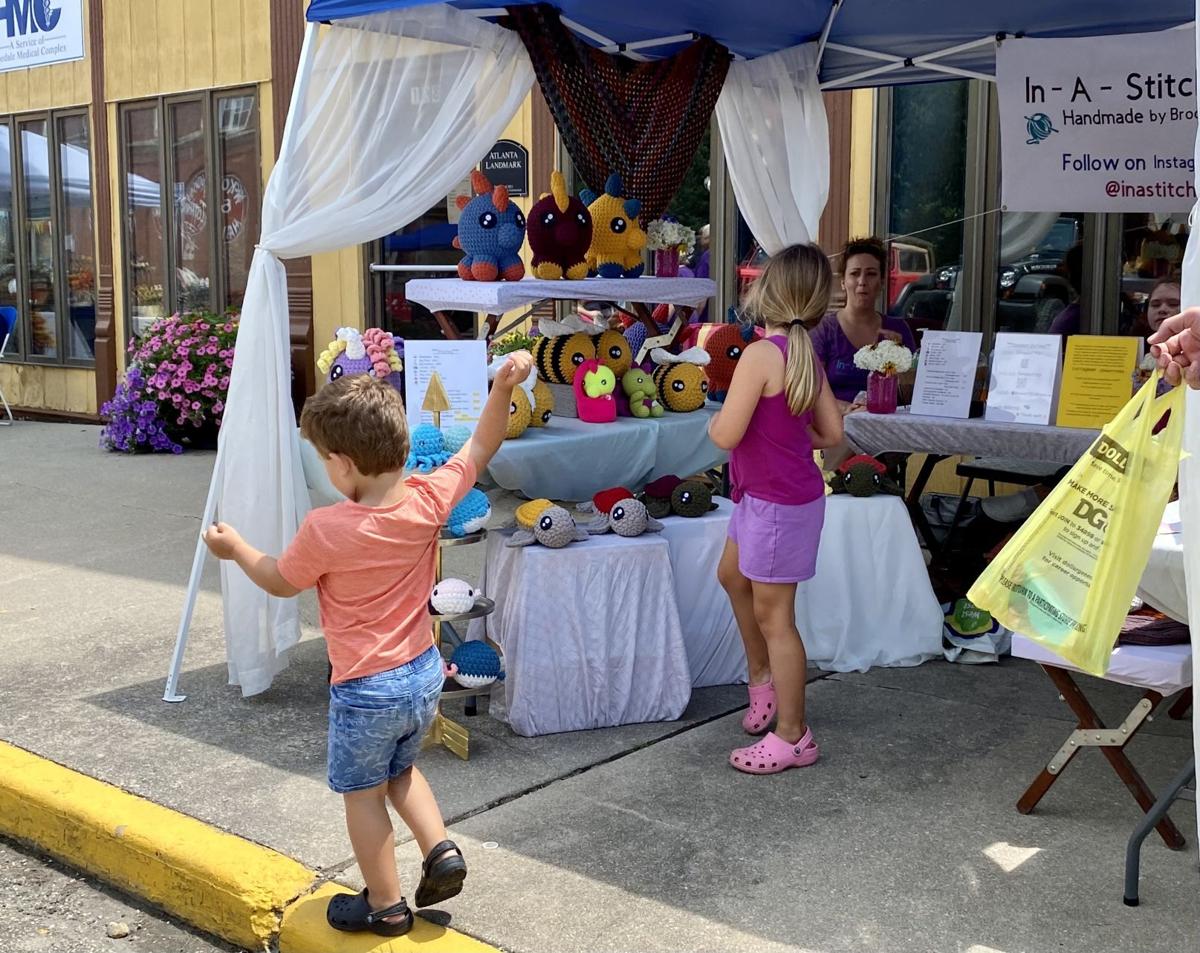 Sammy, 2, and Izzy, 6, make their way inside the In-A-Stitch booth to check out the stuffed animals at Atlanta's first Market Weekend on Route 66 on Sunday. 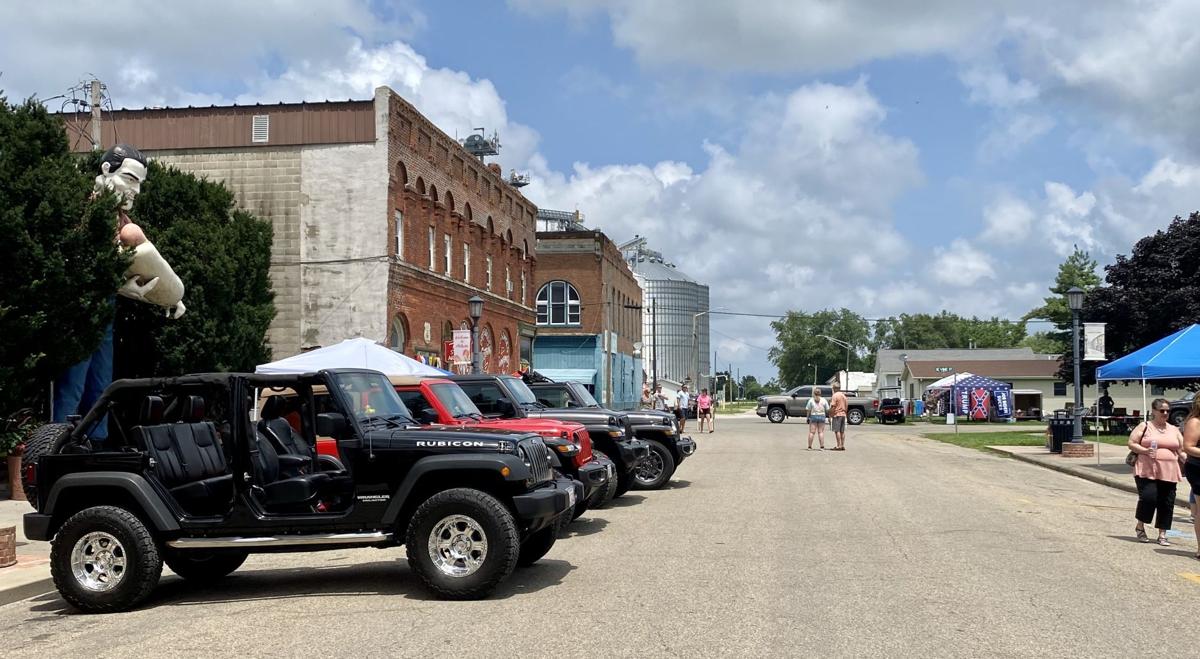 A Jeep cruise-in was held Sunday at Atlanta's first Market Weekend on Route 66. 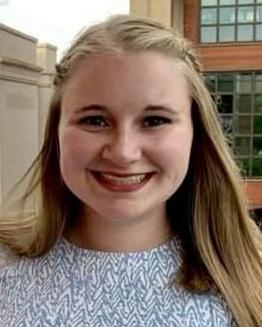